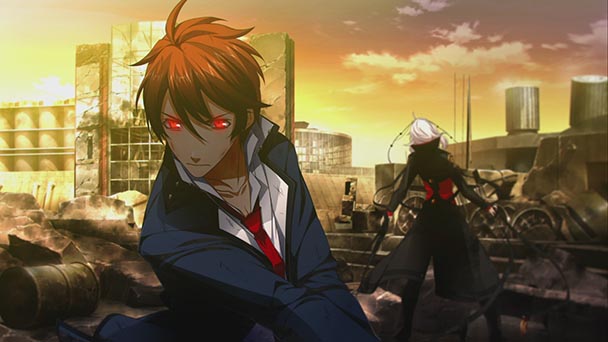 Not long ago, it was nearly impossible for Westerners to play a localized visual novel. As former Nippon Ichi Software president (and now CEO of Idea Factory International) Haru Akenaga once explained, SCEA wasn’t interested in granting publishing licenses for games with a substantial text-based component. As such, the PSP version of Sakura Wars 1+2 never earned an opportunity for a stateside release.

But in the succeeding years, Sony’s stance softened, likely in response to a growing audience of American otaku. While current localization efforts are only a small fraction of Japan’s total output, recently Sony owners have access to XSEED’s Corpse Party series, NIS America’s Danganronpa: Happy Trigger Havoc, or Aksys’ Nine Hours, Nine Persons, Nine Doors and Zero Escape: Virtue’s Last Reward. With the recent release of XBlaze Code: Embryo, not only are VN fans presented with an exceptional experience, but newcomers are poised to acquire a passion for the genre. 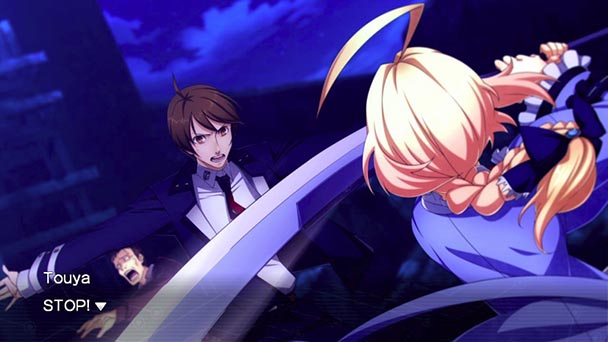 Narratively, XBlaze Code makes a number of deft decisions to entertain both camps. While the story is set in the BlazBlue universe, a knowledge of the mythos isn’t a prerequisite for play. But for gamers who have worked their way through Chrono Phantasma’s character campaigns (as well as explored Blaz’s Teach Me, Miss Litchi! segments), references to the Takamagahara System and The Azure are destined to delight- fleshing out some of the intricacies of the complicated cosmos in a method that’s mechanically similar to the story mode’s cutscenes.

Since Xblaze Code’s plotline is situated nearly 150 years before Calamity Trigger’s proceedings and a half-century before the Phase Shift light novel, Xblaze Code: Embryo’s self-contained plotline centers on a new, unknown cast of characters. This choice means that players who’ve never heard of the Black Beast or even Ragna the Bloodedge will be able to enjoy the title’s plotline without carrying out a cornucopia of research. Adeptly, XBlaze Code also amplifies it’s accessibility by not pigeonholing it’s plotline into one of the conventional visual novel types. While the protagonist is a high schooler, and there’s the obligatory romantic rudiments- the story also mixes in elements of comedy, intrigue, and suspense. With a seeming unwieldy mix of momenta, XBlaze Code handles each constituent competently, and provides transitions between major tonal shifts. 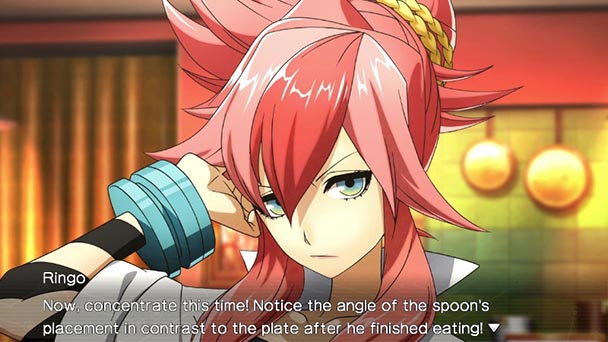 Most proficient is the title’s choice of protagonists. Undoubtedly, lead Touya Kagari is a character that naturally elicits identification; he’s unswervingly friendly, considerate, and constantly tries to resolve any conflict that he comes across. We first meet Touya at his place of residence, where he rents a room from sisters Hinata Himezuru and her adoptive older sister Yuki. On the way home after his shift at a local curry shop, Touya passes by the Ward, a zone around the derelict Wadatsumi Research Facility, which has been abandoned since an accident ten years ago.

Hearing a distant chime, Kagari investigates the source of the sound and is approached by a delirious man. Compassionately, the protagonist offers assistance, but when the stranger destroys a nearby wall with a sonic emission, it’s obvious that Touya is in peril. Auspiciously, an attractive young woman named Es comes to the character’s aid, attacking the man, but injuring Kagari in the process. When the adolescent returns home, he finds Es there, along with a members of a research team. Seemingly, Touya’s ability to hear the chime makes him an ideal associate for the investigators, who are hunting down the “Union”- the name given to Wadatsumi’s infected. 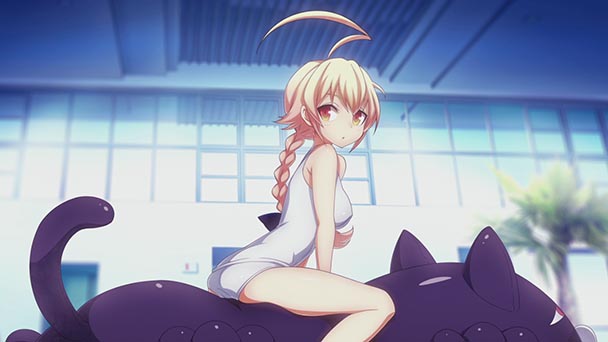 Initially, XBlaze Code: Embryo’s set up can be overwhelming, with the story’s setup beginning in medias res. But if players can relax amidst the prologue, they’ll find that the title offers plenty of insightful exposition and an ample amount of character background.

Soon, gamers will be introduced to Embryo’s signature mechanic, the TOi. Described as “easy to use as a toy”, the Technology of Interest system simulates intelligent RSS feed gathering, allowing players to glean more information about key places, events, or figures. Remarkably, XBlaze Code: Embryo’s storyline branches depending on what articles are read, often commencing conversations inspired by Touya’s newly gained knowledge. Additionally, sifting through the blog-style system is the key to earning affinity with other characters. While the first playthrough of XBlaze might instill uncertainty in gamers- as they have little insight into the repercussions of their readings, subsequent runs reveal character associations. Beyond TOi, players are also a button press away from an expanding database which provides a synopsis of vital information. 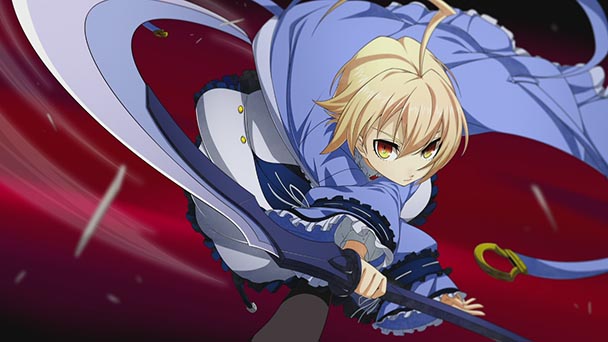 Given developer Arc System Work’s prodigious oeuvre, its little wonder that XBlaze Code: Embryo sets a new bar for the visual novel medium. Beyond a massive amount of voice acting for every character and a soundtrack that underscores, not overpowers every scene- the title offers a gorgeous visual delivery. On the PS Vita’s screen, character and background detail are fastidious, with offering plenty of graphical diversity. But even more astounding is the developer’s effort to make XBlaze Code’s scenes as arousing as possible. From sinuous camera movement, lifelike facial animation, and a variety of one-time visual effects, at times the title can resemble an anime.

Which brings us to Embryo’s only blemish: the inability to review key pieces of dialog. After experiencing Atelier Rorona Plus: The Alchemist of Arland’s conversational navigation capability, we quickly grew accustomed to being able to review an interchange with a few intuitive button presses. Seemingly, XBlaze Code: Embryo’s control options allow for the touchscreen to be used to review the “backlog”, but no combination of tapping or swiping allowed us to revisit a preceding conversation. On the upside, the title does allow players to automatically advance dialog without the need for interaction, which might be ideal for players grabbing a quick meal. Beyond the game, Embryo bestows Blaz’s traditional gallery, extending a collection of unlockable scenes, cinematics, and songs. 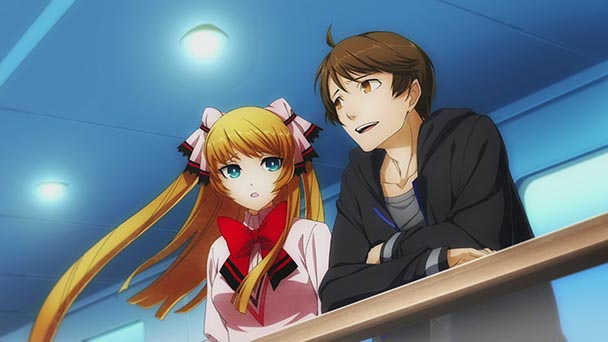 With an adept localization, lengthy and involving storyline, as well as an unsurpassed visual output, XBlaze Code: Embryo easily stands as a benchmark for the visual novel medium. Although the title makes a perfect companion title for the recently released Vita version of BlazBlue: Chrono Phantasma, those who have eschewed the fantastic fighting series will be able to enjoy every bit of this engaging experience. Considering the ambitions and aptitude of XBlaze Code, the visual novel seems destined for an upsurge in acceptance.

XBlaze Code: Embryo was played on the PS Vita with review code provided by the publisher.

Summary : XBlaze Code: Embryo is about as close as the visual novel comes to emulating the aesthetics of anime. Peer past the sounds and visuals, and you’ll find a storyline that should satisfying a wide swath of fans.