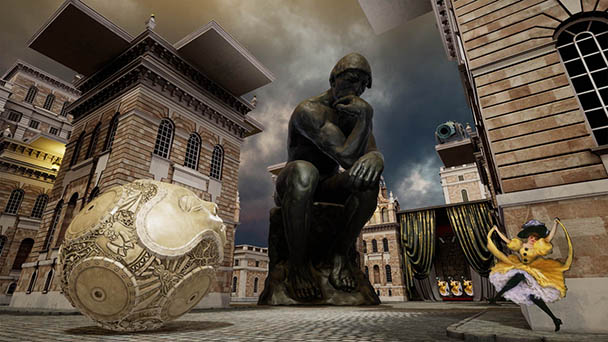 Few developers have a body of work that demonstrates as much creativity as Santiago-based ACE Team. From surreal first-person fighter Zeno Clash, the integration of Chilean folklore and art nouveau into platformer Abyss Odyssey, to the B-movie camp that endowed The Deadly Tower of Monsters with distinction, the studio’s output packs more imagination into a single title than some publishers muster up across their lifespan. This ingenuity was also evident in Rock of Ages, a 2011 title that melded Monty Python-esque animation with mechanics that drew inspiration from both Super Money Ball as well as the tower defense genre. Woefully, it’s cleverness never quite garnered the following it deserved.

With the release of Rock of Ages II: Bigger & Boulder onto the mighty Switch, ACE Team gives the giant rock another roll. When originally released on console and PC, the follow-up offered there’s improvement to both visuals and gameplay, without veer wildly from the lumbering trajectory etched by its predecessor. That means those who played the original title might be disheartened by the shortage of novelty offered up by ACE Team’s sequel. But players who somehow sidestepped the first game risk being bowled over by this quirky and often engaging effort. 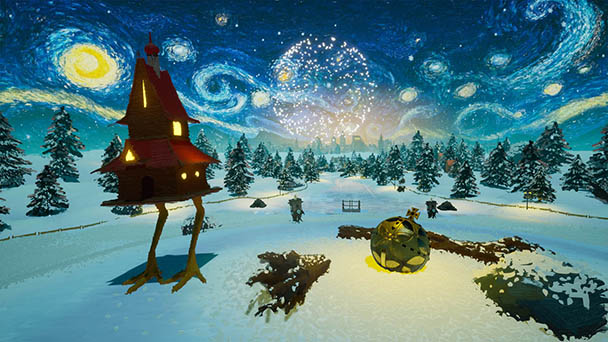 Heading into Bigger & Boulder’s main campaign reveals both a madcap story as well as the bulk of the game’s single-player content. The first game centered on Sisyphus, the Greek king punished for craftiness, and sentenced to endlessly push an enormous boulder up a hill. This time out, Atlas gets the nod, and after misplacing the celestial globe, is tasked with directing boulders through the gates of castles- each helmed by a notable culled from history.

Preceding each stage are Rock of Ages’ Terry Gilliam-inspired cinematics, where paper cut-outs of notables like Richard the Lionheart, William Wallace, Joan of Arc, and even Edvard Munch’s The Scream challenge Atlas. Although there’s an element of slapstick, Bigger & Boulder’s comedy hinges on having paid attention during your humanities coursework. Essentially, it’s low brow humor dependent on high-brow context. Although utilized in the first Rock of Ages, it still feels fresh here. 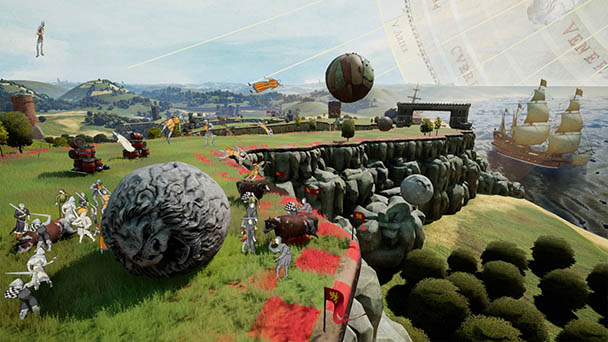 A Rolling Stone Gathers No Moss, But Does Take Damage

Fortunately, any understanding of Western civilizations isn’t a prerequisite for enjoyment once the big rocks begin careening downhill. Here, players will find stages formed from symmetrical pathways, typically filled with an assortment of curves and turns. Play revolves around two activities: building defensive structures and guiding your giant stone orb down the obstruction-filled paths.

Utilizing an expanding toolset that includes everything from fortified walls, springboards, and even groups of explosive powder kegs and cows, players lay down their ensnarements from an overhead perspective. Pleasingly, there’s the possibility of synergy with tools. Slow down or even stop your opponent and other measures will spring to life, steadily damaging your boulder, and diminishing the impact it will have when it smashes against your rival’s doorway. 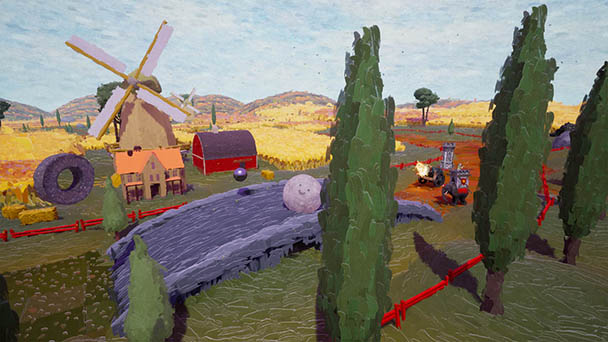 Success in Rock of Ages II stems from understanding the best ways to use your arsenal. Narrow passageways are perfect for the springboards that can send a rock hurting over the side of a course, inducing damage. Walls are also effective as a deterrent, potentially sending foes down the trap-filled region after a fork. Like many tower defense games, experimentation reveals the most effective strategies as you learn to maximize the impact of your defenses and the best ways to spend your income.

As players are construct their fortifications and snares, a team of workers is building your next boulder. Once they’ve completed their task, a fanfare sounds, indicating the colossal sphere is ready to roll, which represents the game’s other endeavor. Thankfully, the curves of each course are highlighted by ground-based icons, forewarning of bends as players simultaneously scan for impediments. 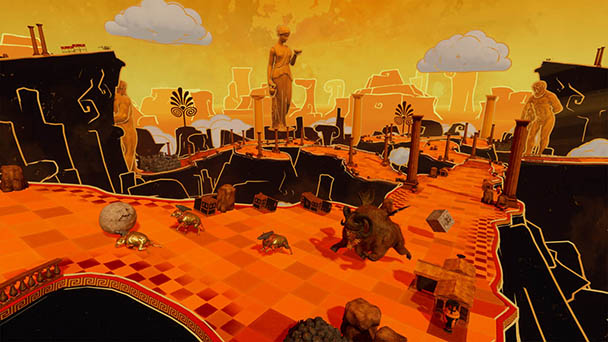 Keep Your Eyes on the Humongous Orb

While previous releases offered an optional picture-in-picture feature which displayed the enemy’s sphere, that feature was nixed for the Switch iteration, presumably to keep frame rates fluid. But with an overhead view of the action and a multiplicity of visual information vying for attention, runs still feel hectic. Another element bound to produce apprehension is just how close competitions can become. Often, a single exodus from the course or a couple of seconds squandered in defense placement can spell defeat, ratcheting up the level of competition.

For players who just want to focus on boulder rolling, Rock of Ages II extends a number of focused mini-games. Obstacle Courses extend races where players circumvent randomly generated obstructions, while Time Trials’ heats offer contests on defense-free environments. For those seeking unadulterated competition, the game’s supports both local and online competitions, with the latter accommodating up a quartet of players. Agreeably, the game endows matches with variation, offering a range of boulders of varying weight, speed, and durability as well as other rolling objects that offer some compelling risk/reward selections. 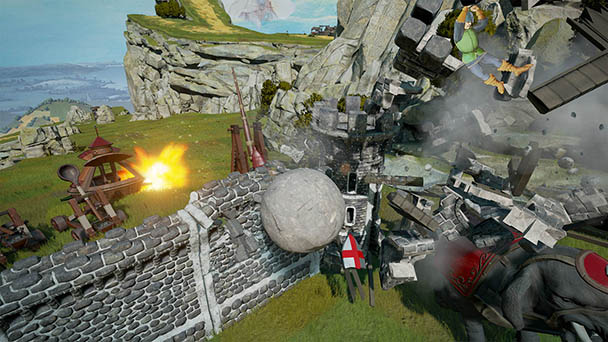 Rock of Ages II: Bigger & Boulder’s campaign is succinct, likely completed in less than five hours. And while the game’s rivalries and mini-games advance additional activity, don’t be surprised if fatigue sets in before you made your through the title. While the game’s creativity is appreciated and new defensive strive to maintain interest, there’s just a bit too much repetition across the game’s core component. The defense building and rolling components are enchanting at first, but gradually lose their luster with each new stage.

On Switch, Bigger & Boulder was built on the Unreal Engine, which endows the game with a satisfying physics system and level of visual charm that helps the game recreate a number of historical aesthetics. Sure, you won’t find the fidelity offered by dedicated consoles or PC, but even in handheld mode, the game maintains a decent framerate and functional output resolution. 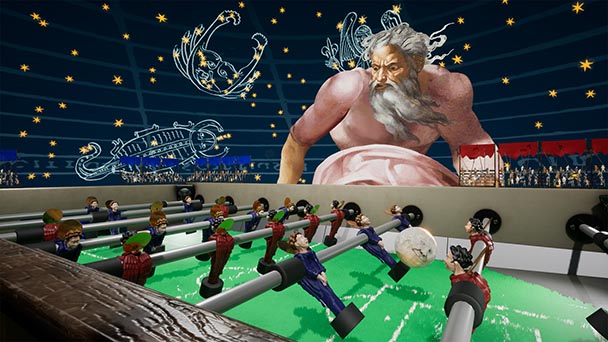 A Solid Port, Especially for Fans of Spirited Quirk

Adeptly, Bigger & Bolder make a solid impact on Switch, bringing the two-year old title to Nintendo’s hardware with a minimum of sacrifices. But for better or worse, this is the same sequel that didn’t radically advance idea expressed in the original titles. What’s here is solid, especially at an affordable price, and certain to provide a few hours of creative fun. But Bigger & Boulder feels like returning to an art museum, where many of the same pieces are on display and the new curations are a bit too few. Fans of the absurd and the irreverent might not mind paying admission again, because what’s here is often charming.

Rock of Ages II: Bigger & Boulder was played on
the Switch with review code provided by the publisher.

Rock of Ages II: Bigger & Boulder (Switch) review
Few developers have a body of work that demonstrates as much creativity as Santiago-based ACE Team. From surreal first-person fighter&nbsp;Zeno Clash, the integration of Chilean folklore and art nouveau into platformer&nbsp;Abyss Odyssey, to the B-movie camp that endowed&nbsp;The Deadly Tower of Monsters&nbsp;with distinction, the studio&rsquo;s output packs more imagination into a single title than some publishers muster up across their lifespan. This ingenuity was also evident in&nbsp;Rock of Ages, a 2011 title that melded&nbsp;Monty Python-esque animation with mechanics that drew inspiration from both&nbsp;Super Money Ball&nbsp;as well as the tower defense genre. Woefully, it&rsquo;s cleverness never quite garnered the following it&hellip;

Summary : Rock of Ages II: Bigger & Boulder is brimming with creativity in this solid port. Unfortunately, a majority of that imagination was already exhibited by its predecessor, diminishing the impact of this sequel. That said, even if van Gogh had painted The Starry Night Part Two, it would likely be worthy of attention.