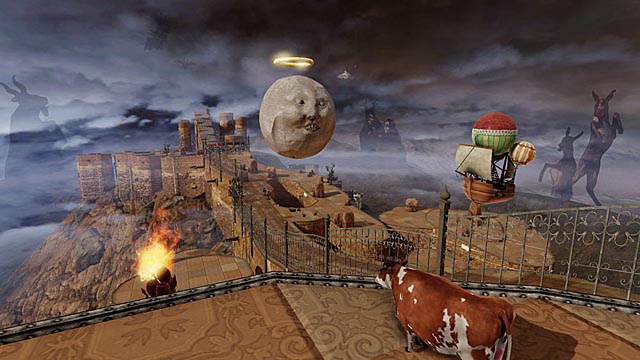 What’s the concept? In Rock of Ages delightfully Python-esque world, Sisyphus finally gets his revenge. As the ancient king forced by Zeus to persistently push a giant stone up a hillside (only to have it repeatedly fall back down), the title offers an alternative mythology were the boulder is used as a vehicle for vengeance. As Ace Studios’ (Zeno Clash) sophomore release, players alternate between rolling these rocks though an opponent’s reinforced door and building impromptu defense systems- designed to protect against the enemy’s own encroaching bolder.

Gratifyingly, Rock of Ages rewards players on their way to the fortified front gates, tempting resolute rocks with period-specific trinkets to shatter. Although some destructibles might push a boulder perilously close to a path’s edges, each shattered object contributes to the war fund, allowing players to augment their defenses or even place a protective, spiked shell around their rock. 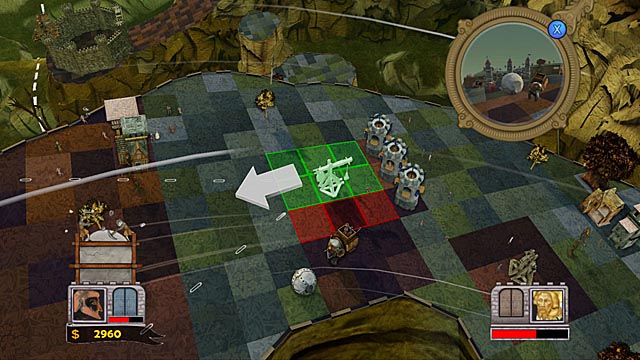 Once an overpowering orb dents their opponent’s entryway, participants are given time to supplement their resistances, placing item such as bulky ramparts, siege weapons, TNT barrels, or even angry elephants in an effort to stymie an opponent’s boulder.  Cleverly, each of Rock of Age’s levels offer multiple pathways, requiring players to be tactical in the placement of their protective forces.

What are the game’s strengths? Rock of Ages is undoubtedly elevated by its charming visual decisions and eclectic references, which allude to everything from Melies’ Voyage dans la Lune to Synder’s 300. Rolling sequences use a low perspective similar to the Super Money Ball series, while defense building channels the omnipotent viewpoint of a tower defense game. Both views are supplemented by a picture-in-picture, allowing players to observe their opponent’s deluge of destruction. In practice, the temptation of gleaning some insight on an enemy’s patterns can often place players on a trajectory for trouble. 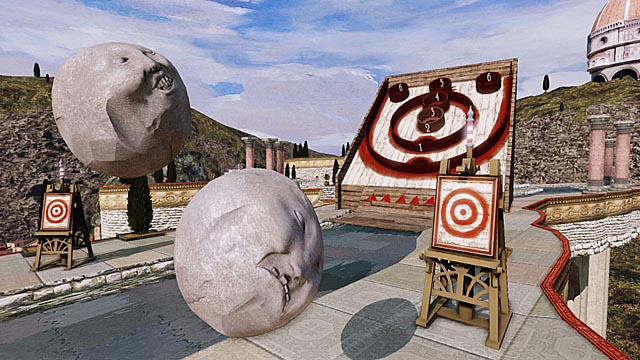 Playable with either an online or local opponent, the game excels as a competitive diversion. Here, the thrill of circumnavigating another player’s elaborate guard system is particularly rewarding. Once players tire of head-to-head battles, Rock of Ages also offers a ‘skeeboulder’ variant and a series of time trials.

What could have been improved? Regretfully, the title’s balance between boulder bowling and building is imbalanced. Since victory usually stems from the force of your third rock smashing into the enemy’s gate, success rewards speed over strategy. Rocks of Age’s controls seem to substantiate the decision. Steering your stone controls impeccably, allowing players to swing their boulders around tight turns and leap over obstacles. Placing defenses is different story, as dropping items in specific squares obliged a bit of analog stick fiddling. Luckily, devices such as the catapults and ballistae have a suitably wide field of effect. 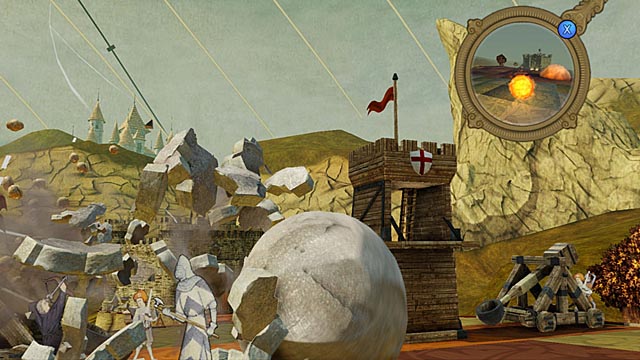 Is it worth the money? Despite Rock of Age’s scarcity of deep strategy, guiding a behemoth boulder through garrisoned grooves and mowing down Western civilization’s luminaries is one of the more eclectic experiences of the year. At 800 Microsoft points, the game’s twenty-three level campaign and two-player variants offer “something complexly different” during an era marked by homogeneity.

Previous: Line and Reason- Lucid Review
Next: Podcast 8-2: Smitten By the Kitten