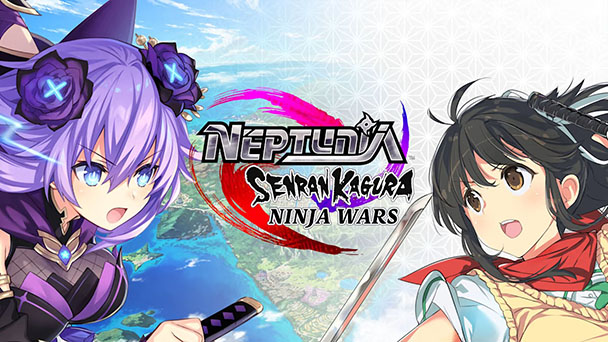 With comical conversations and absorbing combat, the meeting of Goddesses and Shinobi is a triumphant crossover. But there’s a strong likelihood of wishing you could spend just a bit more time with both factions in this proficient Switch port. 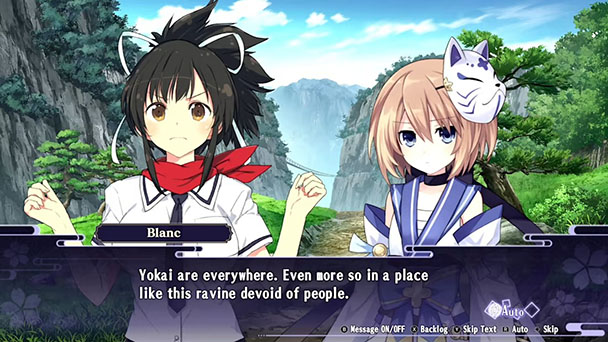 Fortunately, Neptunia x Senran Kagura: Ninja Wars is a victorious crossover that should please fans of both franchises. Although the title favors the perspective of Gamindustri’s goddesses and enjoyment is rather fleeting, Tamsoft’s capable direction results in a title that delivers a pleasing mix of playful banter and engaging action. 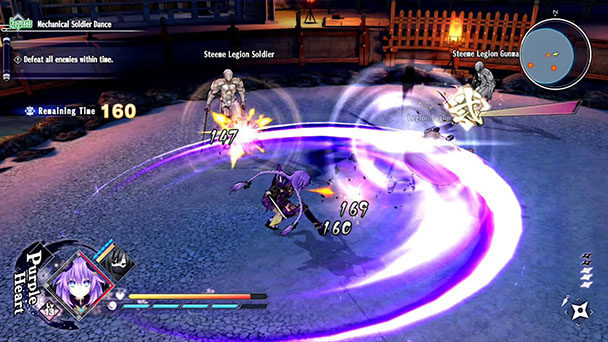 Quite often, the explanation behind cross-over narratives can feel forced, as writers struggle to fuse two fictional worlds together. Adeptly, Ninja Wars doesn’t create a convoluted backstory, reimaging characters from both factions living on a shuriken-shaped island named Gamninjustri. Here, there’s a rivalry between the Daimyo of Heartland and Marveland, putting Hyperdimension’s Neptune, Noire, Blanc and Vert in one faction, while Kagura’s Asuka, Homura, Yumi and Miyabi serve as their sworn rivals. Two new characters join the fun but the cast is notably smaller that efforts from both properties.

Although there’s a lot of boasting between the groups, deep down Nep Nep and the gals just want to be friends, eat pudding, and play games with their adversaries. When a group of metallic ninjas from the Steeme Legion shows, the two groups are united by the threat of a common enemy. Referencing Hyperdimension Neptunia’s allegorical console wars, the robotic practitioners of the ‘Headshot” martial arts represent both Western gaming and the attitude surrounding PC elitism. 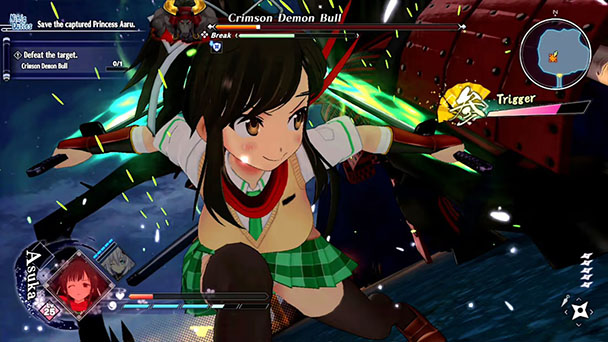 While the script is playful, with mentions of DMCA takedowns and the prevalence of amnesia as a plot device, it does squander a few opportunities. I had hoped the resentments between the Console Patron Units and Steeme Legion would have replicated the absurdity of keyboard warriors defending their hardware choices. Yet, the plot eschews adding fuel to the fire, often hiding the heated rivalries between a veiled representation of market share. It’s all ambiguous enough to not offend anyone but also squanders opportunities to truly poke fun at the absurdity of the industry.

While there’s the requisite hot springs visits and conversations about boob sizes, Ninja Wars can feel like it was reverse engineered around PlayStation’s inequitable stance on decency. Sure, there are hints of sexiness but this is a long way from the clothes shedding, scrolls-in-the-cleavage, puckishness of Senran Kagura’s past outings. There’s still plenty of laugh out loud moments but the sexuality is notably muted this time out. One last issue surrounds the length of the conversations. Chances are you’ll be itching to get out there and start hacking during some of the longer sequences. Likewise, the supplementals often included in the Kagura games is missing. While the ten hour campaign is fun, the sole balancing game lacks the enjoyment of outfitting the girls in different costumes or giving them a muscle-relaxing message. 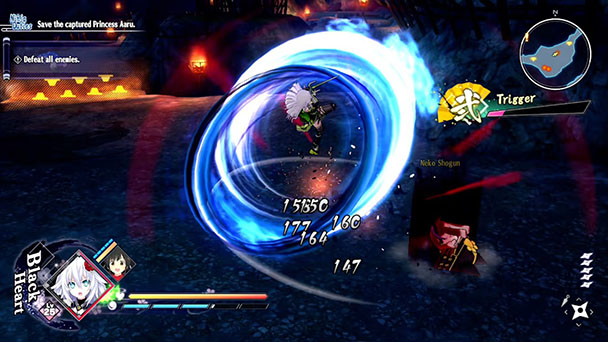 A Successful Spin-Off Thanks to Absorbing Combat

This urge for confrontation is rooted in the quality of the action, which ranks as one of Tamsoft’s better efforts. Here, you’re able to take out a pair of any unlocked characters, where you’ll batter familiar foes leading on the way to the obligatory stage boss. While there’s not much distinction among the cast of playables, there’s accessibility and even a bit of autonomy in Ninja War’s control scheme. For those interested in button-mashing their way through encounters, you can create painless combos with the attack button. But if you’d rather speed up the process of pummeling, you can bring up the game’s Ninja Art Skills with a hold of a shoulder button. Time will slow to a crawl and you can issue four different assaults via your Joy-Con’s face button. While a stamina meter prevents overuse, it refills swiftly, allowing for plenty of eye-pleasing, hit point-draining power moves.

Enemy counts lack the numbers of most musou titles and adversaries tend to shamble around before attacking, providing plenty of possibilities for attacks from behind. Alternatively, you can maintain distance, peppering opponents with shuriken or kunai. Once the EX Gauge is filled through a succession of attacks, characters can unleash their Shinobi Extreme assault. This devastating attack humbles nearby adversaries while rewarding players with a dramatic animation. 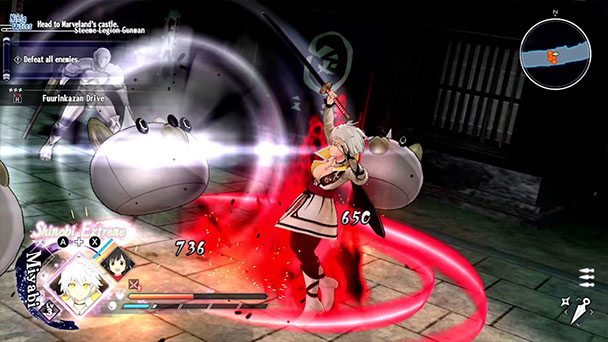 As Swift as Wind, as Gentle as Forest…

Additional variety found in the Fuurinkazan Drive mechanic. This gives character the ability to activate different stat-altered states, potentially providing qualities like additional striking power when facing tougher foes. It’s largely optional, by its inclusion helps keep Ninja Wars’ treks interesting by allowing for experimentation. The one caveat with combat is found when facing bosses who are a higher level than you. Here, Ninja Wars can be punishing, with a single hit reminding players they should have undertaken those noncompulsory missions. And yet, the sporadic hit from an off-screen attacker might frustrate.

Supplementary stat-boosts can be earned by slotting in found Spirit Gems onto a gridded board. Pleasingly, there’s a bit of strategy to placement, with the positioning of identical types of gems activating bonuses. While there aren’t many role-playing elements in Ninja Wars, being able to increase the speed of stamina meter recovery or dimmish damage from certain kinds of foes offers a bit of customization.

Largely, the Switch iteration is a competent port, offering solid 30 frame-per-second battles in both docked and handheld modes. Sure, a bit of resolution may have been sacrificed, but traits like texturing quality, draw distances, and level geometry was spared. Best of all, the physical version is feature complete, since there’s no DLC included in the game. 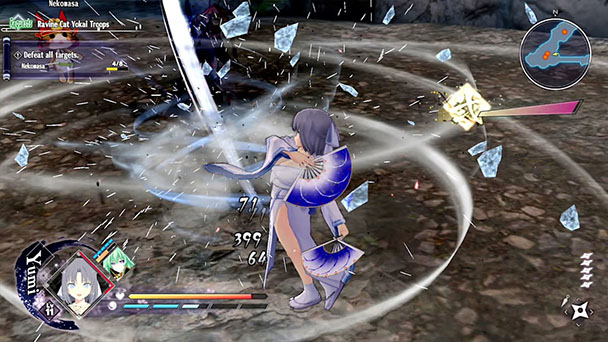 Neptunia x Senran Kagura: Ninja Wars journey is woefully brief, with a total playtime of about ten hours. Although there’s post-game trials found in Yomi Training mode, these tests merely escalate the difficulty by adding in modifiers, rather than contribute anything that feels fresh. On one hand, it’s gratifying to see a game that offers such a succinct length. But on the other, Ninja Wars enjoyment is fleeting, especially for a near-full priced purchase. Think of Tamsoft’s latest as an 88-minute movie brimming with humor and action. While devotees of either franchise will want to be there opening night, less fervent fans might want to wait until Ninja Wars hits the discount theatres.

Neptunia x Senran Kagura: Ninja Wars review
With comical conversations and absorbing combat, the meeting of Goddesses and Shinobi is a triumphant crossover. But there&rsquo;s a strong likelihood of wishing you could spend just a bit more time with both factions in this proficient Switch port. Both the&nbsp;Hyperdimension Neptunia&nbsp;and&nbsp;Senran Kagura&nbsp;franchises have spawned an assortment of spin-offs. But disappointingly, quality has varied wildly. While titles like&nbsp;Hyperdevotion Noire: Goddess&hellip;