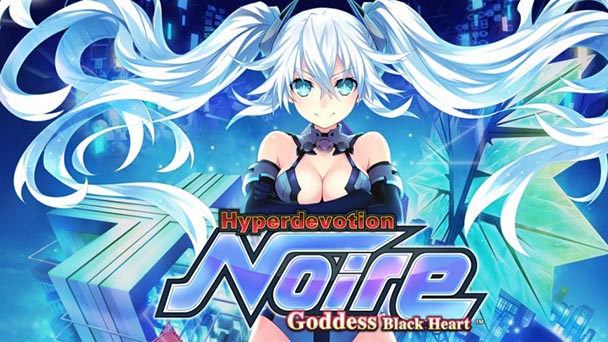 Mirroring the moniker of their parent company, Idea Factory, developer Compile Heart has been consistently proficient when it comes to conceptualization. Record of Agarest War introduced an intriguing “Soul Breed” system into the SRPG genre, permitting characters to sire playable offspring who inherited the statistic traits of their parents, giving the game an enriching sense of legacy. Likewise, the studio’s most famous franchise, Hyperdimension Neptunia, created an elaborate allegory, depicting anthropomorphized consoles fighting for market share as well as the scourge of software piracy.

But across these franchises, Compile Heart’s coding couldn’t quite match the ambitions of its gameplay systems and storylines. Combat would become stagnant during the marathon treks, leaching much of each game’s energy. Likewise, the developers struggled to depict each imaginative realm, with recycled dungeons and framerate dips discouraging a sense of immersion. It wasn’t until the PS Vita remakes of the Neptunia titles (co-developed with Felistella) that imagination wasn’t undermined by imperfect programming. 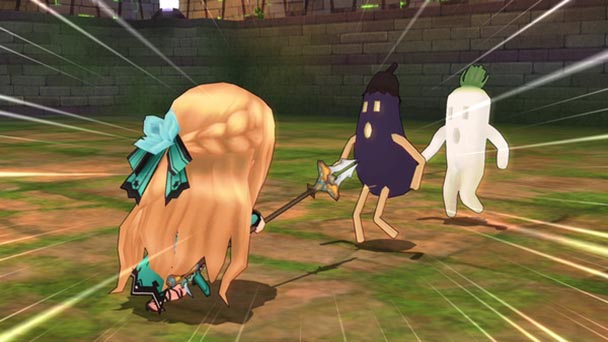 With the Vita release of Hyperdevotion Noire: Goddess Black Heart, Compile Heart teamed up with Sting Entertainment, a studio best known for their programming prowess and attention to detail. Within minutes of first booting up the title, the synergy between the two teams was unmistakable. Goddess Black Heart was undoubtedly Noire, Neptune, Blanc, and Vert’s best outing, offering the rare spin-off that outshines its source material. Pleasingly, the PC port proves just as adept.

This becomes immediately known through Goddess Black Heart’s aesthetic aptitude. An opening cinematic depicts Noire’s rise to power, with the Goddess who symbolizes the Sony PlayStation giving her console-competitors a devastating trouncing. While pre-rendered, the segment is achingly cute, imagining the characters as expressive, pugnacious Nendoroids. While in-engine visuals can’t match the sheer adorability, the game does render the girls in chibi form during battles, while character portraits retain the detail of the Neptunia’s console titles. 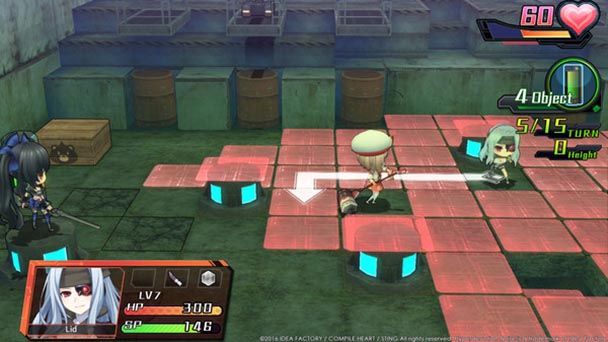 Smartly, it’s not just the main characters that will enchant the eyeballs- with enemies that draw from game lore, referencing foes like Dragon Quest’s endearing slimes, ghosts from Pac-Man, or Space Invaders. But that’s just the beginning of Noire’s hyperdevotion to homage. Parody abounds, with characters that poke fun at popular personalities like Street Fighter II’s Chun Li, Resident Evil’s Jill Valentine, and the Blitzball-loving Tidus from Final Fantasy X. There’s plenty of allusions to slightly more obscure properties, whether through the personification of a bishōjo game or a reki-jo who appreciates Dynasty Warriors just as much as your author.

Satisfyingly, Goddess Black Heart does more than just drop names. Stages lampoon elements of celebrated material, whether it’s a wrestling ring with electrified ropes that satirizes the persistent pugnacity of Street Fighter, a bomb-filled combat zone that’s typifies the tension of Metal Gear Solid, or an exaggerated take on a Winning Eleven football field. Considering that the game’s battles don’t veer too far from strategy role-playing blueprint, the creative contexts can help maintain a player’s interest during the extended duration of the campaign. Ingenuity even extends to the game’s status effects, where characters can become pixelated, tofu-ed, or even zombified, conditions that effect your stats in clever ways. 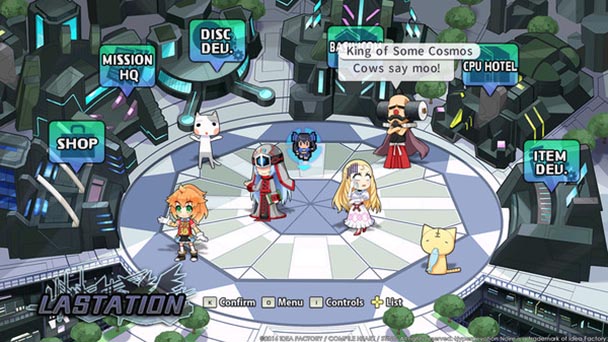 Although the game’s writing is a bit more mischievous than most of the Hyperdimension Neptunia games, dialog has the tendency to become long-winded. There’s little fault in the game’s set-up, which sees Gamarket’s downfall after Noire risks the realm’s wellbeing in an effort to avoid future hostility with her fellow goddesses. The decision effectively enfeebles the character, her strength diminished by a lack of supporters. The impetus for her return to grace arrives the form of an unseen, unvoiced secretary, a contrivance which pushes players into the game’s world. Shrewdly, Goddess Black Heart assumes the assistant has a crush on the characters, which adds a new wrinkle to the series’ typical repartee. But when the goddesses start conversing with one another, they can get become quite loquacious, making players wonder how long they’ll have to wait until the next battle.

Eschewing the conventional combat mechanics associated of the franchise, Hyperdevotion Noire moves conflict to a grid-based playfield, contributing a gratifying tactical element to each skirmish. In execution, battles follow the Disgaea model, with highlighted regions showing the movement range and combat reach. Expectedly, unit positioning is important (with the game requiring characters to worry about the direction characters are facing, but can pay vast dividends through the Lily Boost system. By performing a special adjacent to an ally, the cost of the strike is reduced, while its effectiveness is bolstered, with the perk signified by a perk on the cheek between the girls. 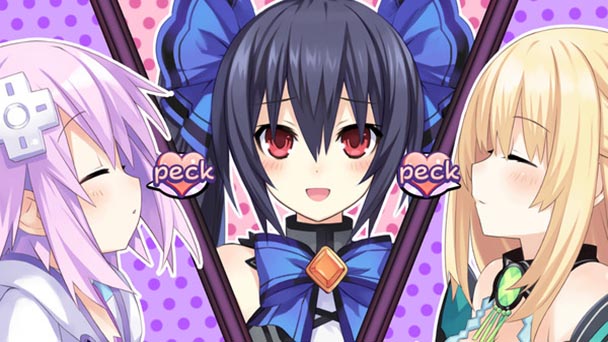 Pacing in strategy role-playing game can sporadically become plodding. Elegantly, Hyperdevotion Noire allows gamers to control the cadence of conflict. Button and key presses can skip animations, while a trip to the title’s menu allows the sequences to be evaded entirely. But only the most time-pressed people will want to shun them. Reliably, the game maintains a solid 30 frame-per-second delivery, even when exhibiting a procession of impressive looking special attacks on lower-end rigs.

For PC aficionados with burlier rigs, the frame rate cap might be a little disappointing, especially when the options menu touts “60 Hz”. Hopefully, either developers or fans will come up with a way to harness the power of those expensive GPUs we saved for. On the upside, the game’s been given a noticeable visual overhaul, with Live 2D models and textures taking advantage of elevated monitor resolutions. Just out of beta, Goddess Black Heart’s only issue is that music tracks will loops errantly. 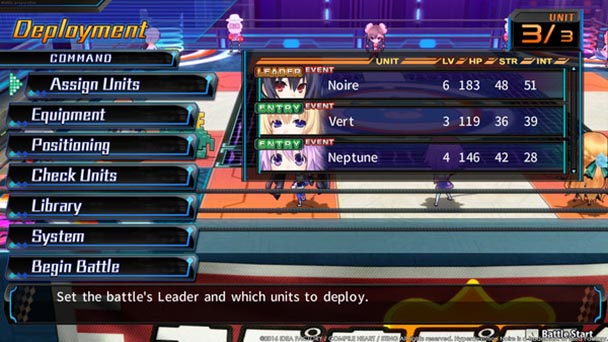 Beyond exposition and conquering antagonist, the game has a quite a few components destined to occupy players. Exterminated monsters reward the adventuring team with a bevy of materials that can be used to craft unique new items and weapons, which ultimately become consumables sold at the item shop. Meanwhile, the disc developer lab allows you to augment your adventuring team, giving stat upgrades, or earn abilities which distribute skill points whenever you take damage. Purchasing item also bestows Sim Points, which can be used to improve Noire’s dwelling, recalling the relationship you had with a Prinny wife in Z.H.P. The Unlosing Ranger VS Darkdeath Evilman. Thankfully, Noire is much less of a nag, bestowing helpful items, and even allowing players to answer her fan mail.

Hyperdevotion Noire: Goddess Black Heart is the game that series fans have hoped for- a near-faultless mixture of concept and coding. While the franchise’s set-up have offered variations of an imaginative and amusing theme, early iterations struggled to deliver. That’s not the case with Goddess Black Heart, which offers a new combat mechanic, as well as the novelty and nuance we’ve always wanted from Neptunia. Noire, take a bow.

Hyperdevotion Noire: Goddess Black Heart was played on the PC with review code provided by the publisher.

Summary : Hyperdevotion Noire: Goddess Black Heart delivers the fan-service players want, and the polish they rightfully deserve. This is how a spin-off should be executed.