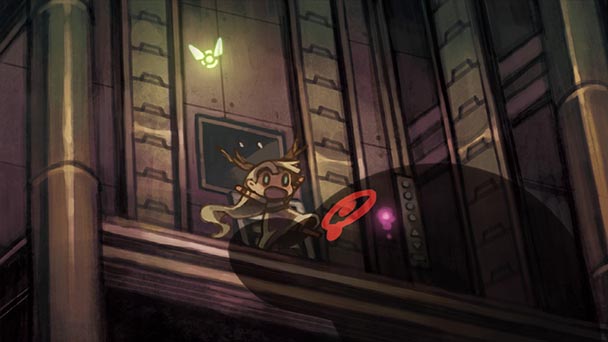 While Nippon Ichi has enjoyed sustained success with the Disgaea franchise, the Gifu-based publisher/developer has often struggled to cultivate another hit. Sure, Spike Chunsoft’s Danganronpa games has earned critical and commercial acclaim and NIS America gradually nurtured stateside appreciation for the Hyperdimension Neptunia series (at least until Idea Factory decided to self-publish), but titles such as The Witch and The Hundred Knight and Battle Princess of Arcadias failed to find substantial audiences on either side of the Pacific.

Unruffled, NIS president Sohei Niikawa pledged that the company would create new brands to serve as an outlet for creative energy. One of the first titles to result from this ambitious initiative was htoL#NiQ: The Firefly Diary, a game conceived and spearheaded by Disgaea D2: A Brighter Darkness character artist Masayuki Furuya. Shirking the Prinny property’s impish irreverence and engrossing battle system, htoL#NiQ was a wide departure from Disgaea or any of N1’s previous efforts, delivering an atmospheric PS Vita-based puzzler that was equal parts solemn and sadistic. Following the publisher’s trend of porting it’s properties to PC, the game has received a port to Windows-based machines. 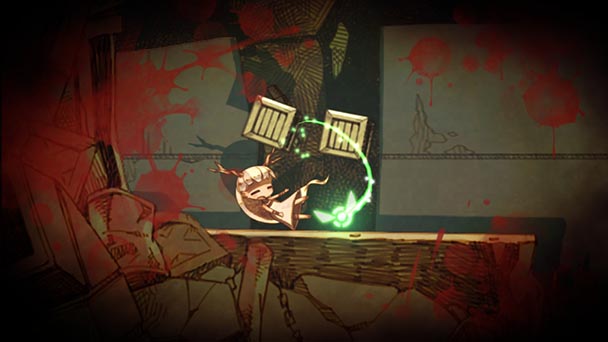 Told with a minimal amount of text-based exposition, htoL#NiQ introduces players to Mion- a young girl who’s lost amidst a desolate, industrializing backdrop. With a vignetted aesthetic framing an already austere world, the sole source of cheerfulness stems from an emerald-hued firefly named Lumen, who casts a radiant aura. Another hovering insect known as Umbra also lingers nearby. But unlike Lumen who exists in Mion’s Light World, the pink-colored creature is confined to the shadows.

What’s in a Name?
At first glance, htoL#NiQ seems like an unpronounceable, indecipherable mouthful. But it’s actually little more than a stylized rendition of the game’s Japanese name, Hotaru Nikki (meaning “Firefly Diary”). Pronouncing “hto” aloud would sound like “hoto” with an utterance of “L” said as “Ru”. The Pound sign (“#”) could be shortened as “No”, and the final two bits would be said as “Ni” and “Ki”. Put it all together and you have “Hotoru no Niki” which when spoken would easily be understood as Hotaru Nikki. Kind of clever, right?

This dichotomy forms the fundamentals of htoL#NiQ’s play mechanics. Using either controller, mouse, and a mouse and keyboard combination, players maneuver Lumen around the screen, with Mion obediently following the character across both platforms and the periodic ladder. Periodically, players are tasked with maneuvering Umbra, who travels on an intricate network of darkened pathways to activate switches that are obscured in the darkness. Naturally, htoL#NiQ’s puzzles push players to shift between the Light and Shadow realms, as players evade increasingly perilous traps and enemies. 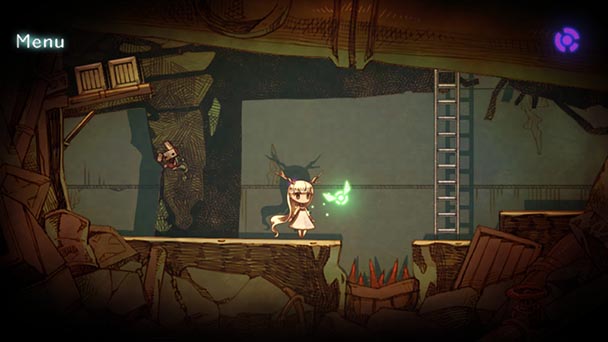 No matter which input method player’s use to guide Mion, implementation is less than ideal. The game uses a narrative-based justification to justify the protagonist’s perpetually lethargic movement. While that excuse might explain the character’s sluggish speed, it doesn’t make navigation any less irksome, especially when danger swiftly moves toward the player. Later, the game’s traps require near-pixel precision to elude, which proves to be challenging without direct control over the character.

Make no mistake, I enjoy a lofty challenge just as much as any of my masochistic peers, but htoL#NiQ transcends mere adversity, frequently encroaching on infuriation. Some of the problem is found in the aforementioned movement speed of the protagonist; often Mion lacks the agility to elude peril. But, rooted in that issue is a problematic design decision, where the game repeatedly demands trial and error testing to advance. Too often, there’s little foreshadowing of danger, whether via trajectory of falling boxes or by a switch that releases a deluge of green liquid that instantly drowns Mion. As such, death is both frequent and arbitrary, which feels like a decision to pad The Firefly Diary’s concise playtime. 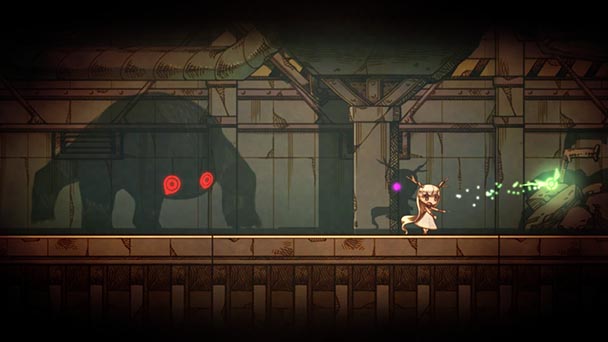 Evidence points to the game’s difficulty being a design decision. There’s a Steam acheivement for dying a hundred times, which for most players will likely be earned before the midpoint. Fortunately, save points are frequent, with the game automatically persevering a player’s progress at regular intervals, while reloads are near instantaneous. In an effort to obtainhtoL#NiQ’s best ending, you’ll have to gather all of the game’s memory fragments. These concealed collectable’s offer glimpses into Mion’s backstory, propelling players into pixelated, three-dimension recollections that vary in tone from good natured to gruesome.

Overlooking htoL#NiQ’s dominating difficulty, the game has a number of positive qualities. Boss battles, (save for the final showdown, which is too dependent on luck) are routinely creative efforts, requiring players to exhibit a mastery of control and concept. Meanwhile, variety is lifted by a number of mechanic changes that emerge throughout the trek, adding elements like an umbrella that can slow Mion’s descent or a section where the controls are inverted. While the character can’t confront foes directly, encouraging reprisal against antagonists can be accomplished by tripping traps. Undoubtedly, The Firefly Diary’s biggest virtue is its presentation, which cultivates a well-crafted sense of melancholy through a minimalistic toolset. While, there’s the occasional shock, most of the game’s atmosphere is subtly hewn- a trait best demonstrated by htoL#NiQ’s moody, Moog-ish soundscape. On the PC, the framerate is locked at thirty frames per second, with a variety of resolutions scaling a windowed or fullscreen image accordingly. 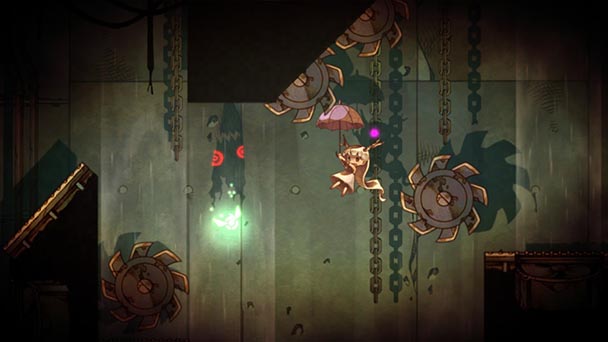 Although htoL#NiQ: The Firefly Diary lives up to its birthright, offering a significant departure from Nippon Ichi’s typical fare, it’s also a tough recommendation. Challenge needs to stem from a prudently foreshadowed sense of adversity rather than arbitrarily erupt from regular points. As such, potential purchasers should approach the title with patience, if they hope to unearth its virtues.

htoL#NiQ: The Firefly Diary was played on the PC with review code provided by the publisher

htoL#NiQ: The Firefly Diary
Platform: PC, previously on PS Vita
Developer: Nippon Ichi Software, Inc.
Publisher: NIS America
Release Date: May 18th, 2016
Price: On sale through 5/22 for $13.49, regularly priced at $14.99 on Steam
htoL#NiQ: The Firefly Diary PC review
While Nippon Ichi has enjoyed sustained success with the&nbsp;Disgaea&nbsp;franchise, the Gifu-based publisher/developer has often struggled to cultivate another hit. Sure, Spike Chunsoft&rsquo;s&nbsp;Danganronpa&nbsp;games has earned critical and commercial acclaim and NIS America gradually nurtured stateside appreciation for the&nbsp;Hyperdimension Neptunia series (at least until Idea Factory decided to self-publish), but titles such as&nbsp;The Witch and The Hundred Knight&nbsp;and&nbsp;Battle Princess of Arcadias&nbsp;failed to find substantial audiences on either side of the Pacific. Unruffled, NIS president Sohei Niikawa pledged that the company would create new brands to serve as an outlet for creative energy. One of the first titles to result from this ambitious&hellip;

Summary : Melancholic masochists, you’re found your next test. Sporadically unfair and unsettling, htoL#NiQ: The Firefly Diary shows Nippon Ichi’s searching for following outside of the Netherworld.

Previous: The Binding of Isaac: Afterbirth review
Next: New Game Releases: May 19th-25th, 2016