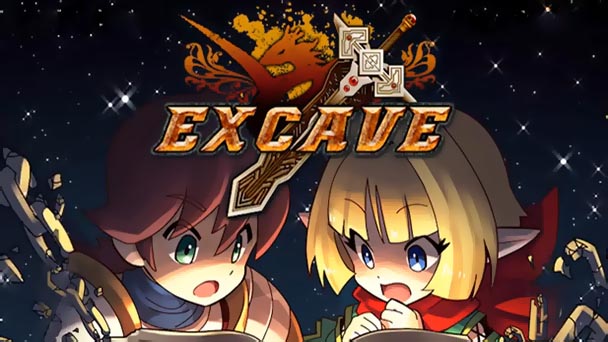 Between Shin Megami Tensei: Devil Summoner: Soul Hackers and the Etrain Odyssey series, the 3DS has a number of quality, turn-based dungeon crawlers. But real-time exploration and creature elimination on the portable is a bit rarer- with Heroes of Ruin being the atypical example of action-based combat across the genre.  Sympathetic to the void in the 3DS’ library, Japanese developer Mechanic Arms (Hooked on Bass Fishing) has crafted a modest entry that sends players hacking and slashing across five different milieus- each filled with monsters, loot, color-coded keys, and the sporadic boss who’s resolute on wiping out the players’ health meter.

A brief bit of text establishes the skeletal set-up, detailing an experiment gone awry in a magician’s subterranean laboratory. The accident led to a multitude of monsters filling the underground lair, and the sorcerer seeking refuge during the ensuing invasion. It’s up to two adventurers to delve into Excave’s dungeon, subsist and support themselves using found items, ultimately attempting to put an end to the enemy onslaught. 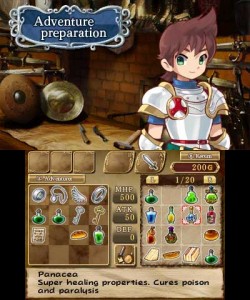 Naturally, Excave’s characters offer a divergent set of abilities. The brown-haired male fighter is adept at melee-based combat, able to wield heavy swords and spears, while the fair-haired female adventurer is skilled at quick and ranged combat, quickly striking at foes with a rapier or bow. While basic gear can be utilized by both explorers, more exotic weaponry is ascribed to each lead. But beyond a collective pool of unearthed equipment, the two characters don’t have much interaction, which feels like a missed opportunity. Instead, the plot is moved along by finding notes scattered around each dungeon. Offering succinct bits of explanation exposition, the memos occupy a space in each character’s undersized inventory. On the upside, the notes can be sold for a bit of coin, so they shouldn’t automatically be sent to the recycle bin.

A lack of interaction also permeates Excave’s storefronts. While venturing to the blacksmith’s workshop can fix broken weapons and there’s an item shop which sells commodities like potions and food, the game shuns any kind of characterization, merely giving players a visual representation of goods and the corresponding prices. After years of making developing rapport with the local shopkeeps, the lack of any personalities is a strange omission- especially since the lead characters are attractively drawn. 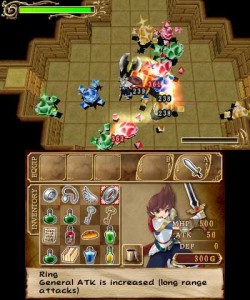 As players decent through Excave’s depths, they discover packs of pugnacious creatures, with a bestiary broadened by an ample amount of palette-switching. Largely, combat favors simplicity with players learning to effectively issue a multi-hit combo, while shielding or evading during the period of vulnerability which follows that succession of strikes. Smartly, battles aren’t just about well-timed button mashing, with both characters having access to magic that automatically attacks nearby creatures for a short period of time. While large groups of monsters can be perilous, Excave’s most threatening enemies are boss characters who require player master the art of timely blocking.

Complication arrives in the form of the aforementioned breakable weapons, which seem to stop working during moments of extreme urgency. As such, this feeds into Excave’s most notable mechanic: frantic menu fiddling. While players can use a combination of the directional-pad and ‘Y’ button to move items into boxes representing equipped gear, the most intuitive method is via the touchscreen. With a few swipes, players can switch tools but when you’re surrounded and taking damage from hoard of attacking creatures, even a few simple gestures can’t be accomplished too quickly. Likewise, players drag potions to their on-screen characters mouth, making Excave best played with stylus always at the ready. 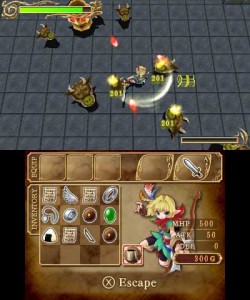 Even during durations when you’re not encircled by incensed monsters, inventory management can be thorny. Boxes representing items held in the characters’ hands need to be constantly swapped out, often requiring an exchange of an indispensable shield with a key that’s used to open entrances. Supportive gear gets three containers, while the rest of the players goods have to fit into sixteen spaces- with no bundling of comparable items such as  potions. As such, expect to contemplate the value of newfound gear and carefully build a carrying inventory from a list of items you think will be most essential.

While Excave’s first non-descript first stage, with its gridded floors and round enemies looks like a Go board, the game’s visuals improve once players visit subsequent levels. While the game’s isn’t without perk- weapons are nicely rendered and clearly differentiated, graphics can be slightly drab. Some of the problem is that the game is presented entirely in two dimensions, with Mechanic Arms failing to take advantage of the 3DS’ stereoscopic capabilities. Fortunately, the game’s sonic output is far better, flaunting an array of cheerful, driving chiptunes which charismatically evoke the 32-bit era. 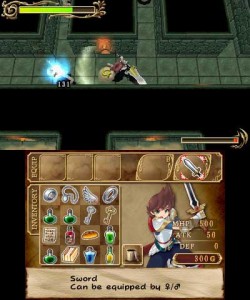 Given economical price and the lack of action-based dungeon crawlers on the 3DS, Excave makes a worthwhile addition to the portable’s growing library. While the game has a good hold on the rudiments, offering enough beast-bashing and loot to drive players onward, the experience can feel a bit drab at times- a blemish steaming from a lack of secondary characters and a spartan visual design. That said, if rumors of a trilogy are true, sequels could build something that quite distinctive on this rather dependable foundation.

Excave was played on the 3DS with review code provided by the publisher.

Excave
Platform: 3DS
Developer: Mechanic Arms
Publisher: TEYON
Release date: February 19th, 2015
Price: $4.99 via eShop
Excave review
Between Shin Megami Tensei: Devil Summoner: Soul Hackers and the Etrain Odyssey series, the 3DS has a number of quality, turn-based dungeon crawlers. But real-time exploration and creature elimination on the portable is a bit rarer- with Heroes of Ruin being the atypical example of action-based combat across the genre.&nbsp; Sympathetic to the void in the 3DS&rsquo; library, Japanese developer Mechanic Arms (Hooked on Bass Fishing) has crafted a modest entry that sends players hacking and slashing across five different milieus- each filled with monsters, loot, color-coded keys, and the sporadic boss who&rsquo;s resolute on wiping out the players&rsquo; health&hellip;

Summary : Although Excave isn’t a consummate dungeon crawl, it’s engaging and affordably priced. Fans of the genre may want to plumb its depths.