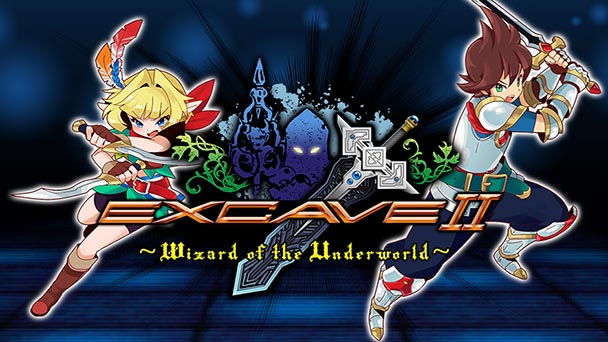 Helping to fill the deficiency of dungeon-crawlers on the 3DS, last February’s Excave proved to be a passable entry in the genre. While the title periodically succumbed to hack-and-slash tedium and exhibited an uneven challenge curve, these transgressions were counterbalanced by a five dollar purchase price. Most interesting was the game’s approach to character advancement, with any obtained loot making just as much of a difference as the stats boosts earned through level progression.

For the next installment in the trilogy, publishing duties have stitched from Treyon to Bergsala-Lightweight, a firm best known for bringing Hello Kitty titles to mobile, Wii U, and 3DS owners. While Excave II: Wizard of the Underworld is twice the price of its predecessor, the sequel also refines a number of key elements. As such, the title is a serious contender for players who appreciate the commission of mangling creatures while simultaneously managing their inventory. Much like Damascus Gear: Operation Tokyo, the DNA of Diablo is ingrained in Excave II.

Like its predecessor, Wizard of the Underworld’s narrative is both terse and non-compulsory. An introductory text scroll offers the game’s set-up, where the once-tranquil forest adjacent to the players’ castle has been overrun with monsters, signifying an anomaly growing in the middle of the woodland. To evaluate and eradicate the emergent threat, Underworld employs the same two protagonist from the first game. A spikey-haired young male offers a melee-based might, able to swing axes and swords, while his female counterpart has a repertoire of ranged attacks. While a rapport between the two adventurers is non-existent, they two leads share a communal inventory. With the game’s quintet of dungeons (each with three or four sub-levels) shifting between massive mobs and the occasional overpowered foe, players will most likely want to promote the growth of both protagonists. 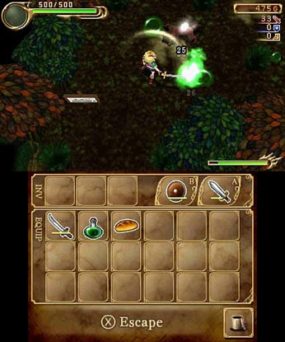 Whereas Excave’s leveling system was essentially concealed from player’s eyes, the sequel is much more forthright. Now, each adventurer doesn’t level up, instead any found items raises the character’s stats- which are persistently shown on the right side of the top 3DS screen. As such, there’s a bit more item management this time around, with developer Mechanic Arms’ bestowing two additional sundry slots, allowing characters to carry eighteen items, three accessories, a weapon, and either a shield or a spell casting rune.

Pleasingly, runes have a larger capacity last longer this time out, extending the use of most of the elemental abilities. Like Underworld’s weapons, their endurance is exhibited by a small gauge. Push arms to the brink and they’ll eventually break, requiring repair back at the castle blacksmith. Runes can be rejuvenated as well, but will permanently shatter is pushed past their maximum usage. Wizard of the Underworld retains the tension between shield and spell, forcing players to decide between offensive or defensive capabilities.

Whereas players could use the direction pad and face buttons to select, rearrange, and use inventory items, now players are forced to use the left shoulder button to cycle though their consumable goods. As such, when adventurers becomes surrounded by attacking antagonists, navigating to a health replenishing elixir can take a moment too long, pushing players to question why the other shoulder button or d-pad is inoperative. Another gripe is the lack of a pausing. Although players might be able to take a quick breather after clearing an area of enemies, occasionally the lone hidden opponent emerges- poised to siphon the player’s health away. 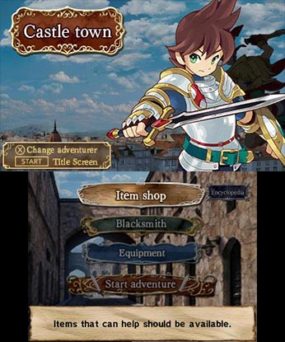 Look past these blemishes and combat is enjoyable. Wizard of the Underworld is particularly adept as conveying the difference between weapons. Carry a giant, crowd-clearing axe and you’ll find the weight of the weapon being a burden, while different swords produce distinct attack animations and damage zones. While enemy attack patterns are largely predictable, with foes making a beeline toward players, their increased numbers makes Underworld’s battles most rousing. With stages and sub-levels habitually punctuated with boss encounters, players are encouraged to study the abilities of these foes and bring provisions to help offset poisoning and paralysis. For the most part, these end of level opponents are nicely drawn, bringing a bestiary of substantial-sized animals and mythological creatures for tense confrontations. The only real downside is that bows and magic spells can’t lock onto enemies, limiting the span of ranged attacks.

Completion of the campaign opens up two additional components designed to test the abilities of talented players. The Underworld Tower increases the fortitude of foes, compelling gamers to confront individual enemies rather that whole mobs. Challenge Mode tasks gamers with completion of the game without the amenities found in the town castle. As such players will have to rethink their strategies, making use of every found item if they hope to see the make it to the finish.

Visually, Wizard of the Underworld is an improvement over the first Excave. Environments are more organic, while enemy variety is augmented. The downside is the game fails to utilize the 3DS’ stereoscopic capabilities, delivering a consistently two-dimensional dungeon crawling experience. Sonically, the Excave II excels, with melodic melodies that recall the chiptunes of gaming’s golden age, with effervescent, upbeat tunes that demand deliver through a set of headphones. 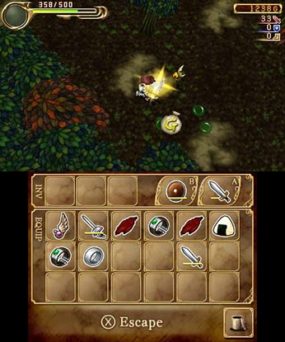 Although Excave II: Wizard of the Underworld isn’t free of flaw, it’s an enjoyable experience that improves upon the first game. More than lively, plumbing the title’s depths will divulge an absorbing dungeon crawl that’s light on complexity, but heavy on hectic creature killing and inventory management.

Excave II: Wizard of the Underworld was played on the New 3DS with review code provided by the publisher.

Excave II: Wizard of the Underworld
Platform: 3DS
Developer: Mechanical Arms
Publisher: Bergsala-Lightweight
Release date: April 2nd, 2015
Price: $9.99 via the Nintendo eShop
Excave II: Wizard of the Underworld review
Helping to fill the deficiency of dungeon-crawlers on the 3DS, last February&rsquo;s Excave proved to be a passable entry in the genre. While the title periodically succumbed to hack-and-slash tedium and exhibited an uneven challenge curve, these transgressions were counterbalanced by a five dollar purchase price. Most interesting was the game&rsquo;s approach to character advancement, with any obtained loot making just as much of a difference as the stats boosts earned through level progression. For the next installment in the trilogy, publishing duties have stitched from Treyon to Bergsala-Lightweight, a firm best known for bringing Hello Kitty titles to mobile,&hellip;

Summary : Although the escalated purchase price might trigger suspicion, Excave II: Wizard of the Underworld is a dungeon crawl that’s largely pleasing.