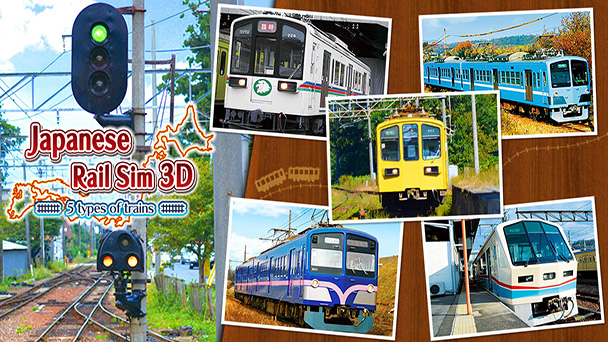 An appreciation for rail transit is inevitable after a trip to Japan. Whether you’re enjoying a scenic three-day tour aboard the Twilight Express Mizukaze, taking the Shinkansen (bullet train) to race between Tokyo and Kyoto, or just riding the Yamanote Line for an afternoon of shopping in Akihabara, you’re bound to appreciate the efficiency and ubiquity of rail systems. Not only is each train immaculately clean and blissfully quiet, but Japan prides themselves on the punctuality of their transit. And with such a complex network of different rails, even a slight delay could wreak havoc on the entire system.

As such, it’s little wonder that trains run with clock-like precision. In fact, a delay of more than a few minutes is an extreme rarity, prompting a heartfelt, personal apology from the conductor and the option for a “delay certificate” to show the boss. In short, there’s little room for error for a rail engineer. 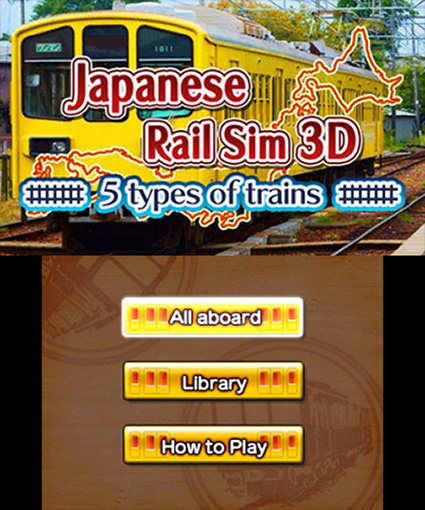 The recent release of Japanese Rail Sim 3D 5 Types of Trains demonstrates just how large the margin for miscalculation can be. Placing players in the engine cab, where they’ll stop at the proper mark across a succession of stations and obey a strict set of speed and time limits, you’ll undoubtedly develop newfound appreciation for engineers. While the game might have limited appeal, those who do purchase this eShop title might just gain insight into the acceleration and braking systems of light commuter rails, as well as an appreciation for the hard-working individuals who are in charge of moving thousands of commuters and sightseers each day. At the very least, 5 Types of Trains works as a virtual tour guide, taking players on the Ohmi Railway, the oldest existing private railway in the Shiga prefecture.

Players who have picked up previous Japanese Rail Sim installments will notice a similar structure as they direct a quintet of passenger trains across twenty-five stops across the Main Line, simulating a 47.7 km journey. Bordering on Mount Ibuki and Lake Biwa, the trek showcases Shiga’s rural charms. With a multitude of topographical changes and bends, the trip will keep budding engineers busy, as they deal with a variety of grades and short station platforms. As such, you’ll have to keep a close eye on your speed indicator, as you’re speeding over bridges and past the alluring landscape. 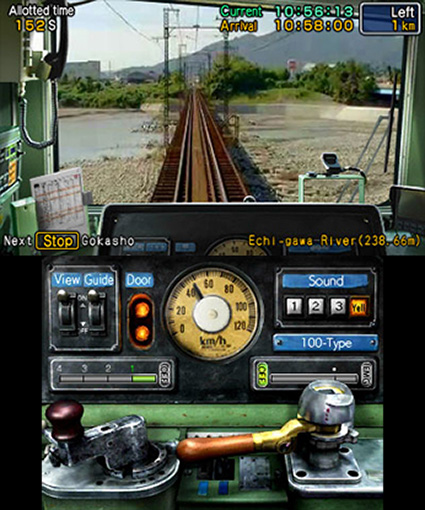 At each station a countdown timer gradually winds down until it’s time for departure and the doors automatically close. Once this happens, players can use the ‘Y’ button to release the brakes, before using the directional pad to increase the speed on the master control switch. Alternatively, players may opt to use the stylus to interaction with the levers that are rendered on the bottom 3DS screen. Regardless of what input method is used, both systems mimic the control system of the 100, 220, 700, 800, and 900 type engines. While there isn’t a striking difference in performance, qualities like kilowatt power influence the speed, acceleration, and braking ability of trains.

For the three to five-minute duration between each stop, players are responsible for setting the speed of the train. Here, Japanese Rail Sim does an admirable job of articulating speed limits, with either glowing indictors on the accelerometer or text to show the restricted speeds when leaving stations or around bends. Periodically, the game even asks players to sound the whistle when rounding a corner, with overzealous blowers receiving a point deduction. Tension mounts as warnings alert players to an upcoming station, where they have to bring the hurtling train to stopping point that roughly the size of a 500-yen coin. 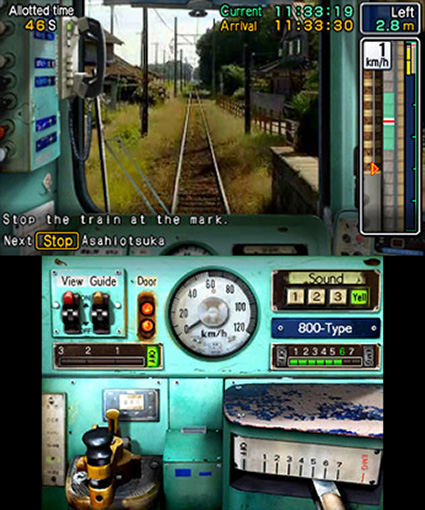 When coming into stations, if you bypass the mark by more than a meter the game ends, signifying a conclusion to your condensed career as a rail engineer. Those who do bring the commuter train successfully into the station receive a grade based on precision and punctuality. As a reward, players will gradually unlock entries in 5 Types of Trains’ library. Here, players get to look through photos and text-based descriptions of the attractions around each station, like the Seigan-Ji Temple, with its 14th century statue of Kannon, the Goddess of Compassion or the Ohmihachiman’s verdant zelcova trees outside Hikone station. While the content in the library isn’t as abundant as previous Japanese Rail Sim outings, there’s enough picturesque content to inspire a trip to the Land of the Rising Sun.

But, arguably the game’s biggest reward are the full motion video sequences which offer an engineer’s perspective across the picturesque journeys around the Shiga prefecture. In execution, the visual delivery isn’t perfect. When your locomotive is hurting along at 60 kilometers per hour, the scenery is wonderfully fluid. But when the train is coming to a halt, and you really need to monitor your velocity (fortunately, an overheard visual representation is offered on the right side of the screen), since the video is significantly slowed down. Peripheral elements like birds seem frozen, sullying the game’s reproduction of movement. Fortunately, each title’s aural delivery is flawless, with both games offering a realistic recreation of roaring engines, squealing brakes, and in-train announcements in Japanese. 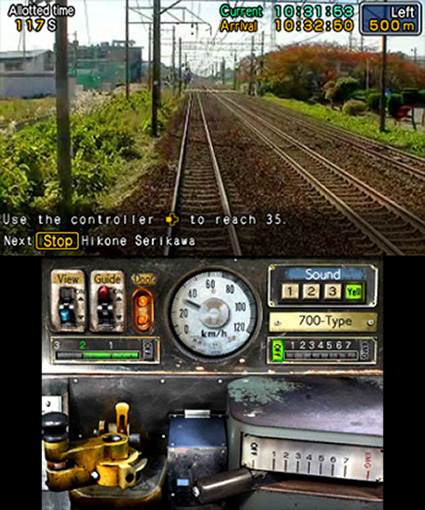 Considering that gameplay consists of regulating speed and making precision stops, Japanese Rail Sim 3D likely won’t interest the average player. But those with an appreciation for trains or Japan’s natural beauty might want to hop aboard Sonic Powered’s simulation. While the title has a limited amount of interaction, the subject matter and the natural splendor won’t be found outside of this series.

Japanese Rail Sim 3D: 5 Types of Trains was played on the
Nintendo 3DS with review code provided by the publisher.

Japanese Rail Sim 3D: 5 Types of Trains review
An appreciation for rail transit is inevitable after a trip to Japan. Whether you&rsquo;re enjoying a scenic three-day tour aboard the Twilight Express Mizukaze, taking the&nbsp;Shinkansen&nbsp;(bullet train) to race between Tokyo and Kyoto, or just riding the Yamanote Line for an afternoon of shopping in Akihabara, you&rsquo;re bound to appreciate the efficiency and ubiquity of rail systems. Not only is each train immaculately clean and blissfully quiet, but Japan prides themselves on the punctuality of their transit. And with such a complex network of different rails, even a slight delay could wreak havoc on the entire system. As such, it&rsquo;s&hellip;

Summary : Given the quality of the simulation, there's little reason why players shouldn't take a ride on Japanese Rail Sim 3D 5 Types of Trains.