The Future of 20XX 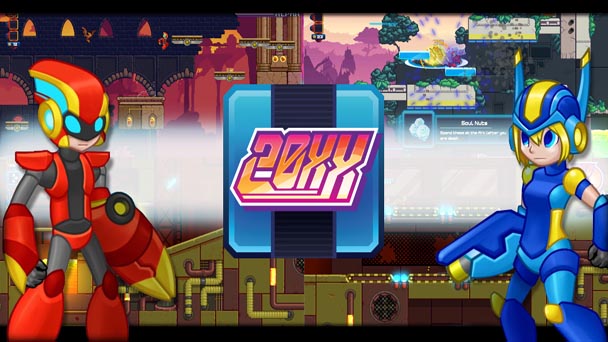 It’s interesting to think how ten years ago Megaman fans were suffering from franchise fatigue as Capcom kept releasing title after title starring the famous blue bomber. Yet, today this mascot is relegated to little more than cameo appearances with every announcement of a new Megaman release being either canceled, or left in limbo. However, those of us who grew up during the 8-bit and 16-bit days still hold fond memories of our battles with Dr. Wily and Sigma’s reploids. In the end, it was only a matter of time before another developer heard the fans’ outcries, niche as they may be, and release their own spin on this formula hoping to attract an already established follower-base.

Enter 20XX, an indie title which can best be summarized as Megaman X with roguelike elements. Indeed, the connection to Capcom’s blue bomber SNES spin-off are made evident as soon as one takes a glance at our two protagonists, Nina and Ace. Ace may resemble Zero in character design, but Nina takes this one step further and looks so close to X that it borders on copyright infringement. 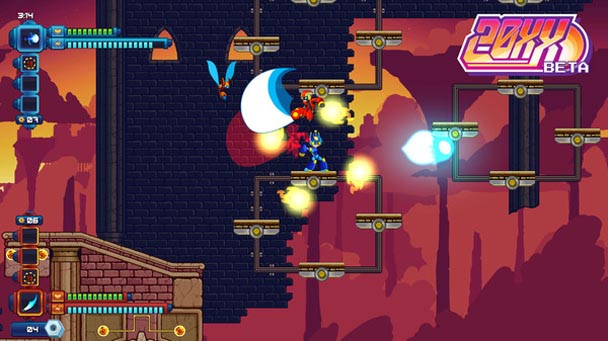 Similarities don’t end there, as Nina handles much like Megaman does, shooting enemies from afar though she may only fire three shots at a time, no doubt a reference to NES limitations. Among her repertoire, she can charge shots for a more powerful blast, scale walls and issue a short speed boost. Ace on the other hand controls much like Zero does in Megaman X4 and X5, foregoing ranged attacks in favor of melee strikes.

Rather than providing a stage select screen with fixed level design, 20XX features procedurally generated stages with a boss encounter at the end. Traversing through these areas provides a nostalgia-filled experience for anyone who familiar with the 16-bit games. Stylistically, all backgrounds and enemies seem based around classic designs, one particular foe was reminiscent of Chill Penguin and even featured the same lunge attack. Oddly enough, there were no enemies based on mets. 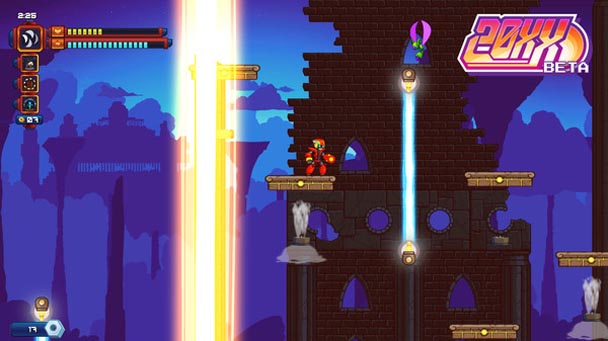 Although levels are procedurally generated, there is a certain logic as to how they should be carried out. Often times players must traverse through tricky platforming segments or can wander off the beaten path in search of secrets and upgrades. Any power-ups found are persistent throughout your run, losing them only when the player dies at which point the entire game must be restarted.

Upon defeating a boss, players are taken to a reward area where they may choose one of two enhancements. These range from new weapons to health, jumping and ammo upgrades. Should a stage be completed within par time you will receive an additional bonus. As a result, gamers are expected to navigate through each level as quickly as possible mastering tricky platform segments as they appear. Once a stage is completed, you may then choose one of three random paths with the next boss encounter being your only indication. Bear in mind that bosses may be repeated as unlike Megaman, your new weapons are not tied to their abilities. 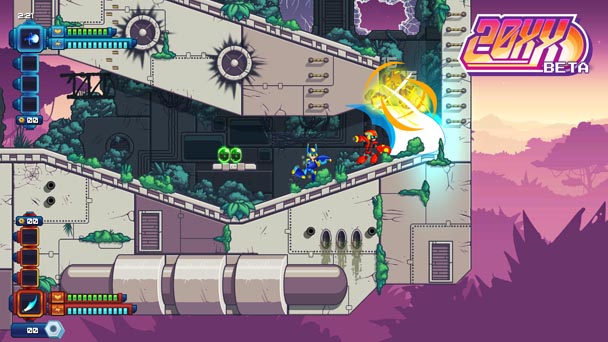 Some power-ups and weapons can be used by either Nina or Ace while others alter their gameplay in distinct ways. I generally found Nina to be the better character due to her ranged attacks which allow players to dispatch enemies before performing a tricky jump. Ace however, provided a clear advantage when battling groups of enemies in close-range. Defeated foes may sometimes drop healing items, nuts which can be used to purchase in-level healing items or soul nuts. The latter allow players to purchase bonuses for their next playthrough.

20XX features local and online co-op allowing players to pick any combination of the two available characters. Though sadly, as of yet, the online portions do not seem to work properly. In theory, once the final release is out, gamers may employ a matchmaking feature, but this did not seem to function at all during my playthroughs. 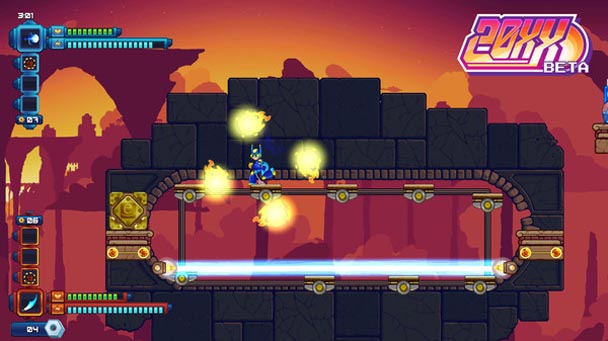 One front where 20XX falls short from the series it’s paying homage to is the soundtrack. This isn’t to say the game’s music isn’t pleasant or fitting, only that one would be hard pressed to match Capcom in its prime.

Even as an early access title, 20XX is the best approximation to the Megaman franchise gamers have been presented with in roughly a decade. The game celebrates Capcom’s blue bomber in both visuals and gameplay while adding enough twists to make it feel unique. We can only hope the final release will improve upon an already solid formula even further. 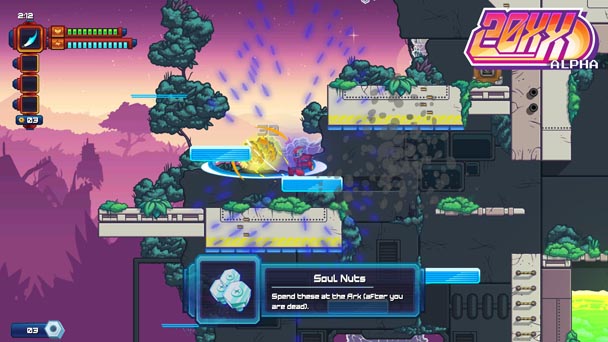 20XX was played on the PC with preview code provided by the publisher.