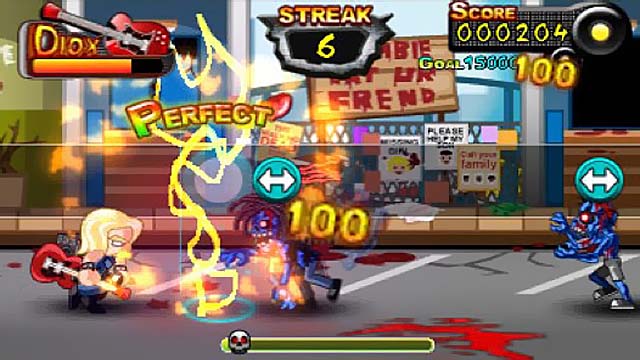 What is the concept? Last January, UFO Interactive unleashed its inaugural eShop title, Samurai Sword Destiny, which pitted a lone protagonist against throngs of encroaching enemies. Like the developer’s debut effort, follow-up title Zombie Slayer Diox tasks a solitary, stalwart hero with slicing through a procession of foes- this time seizing inspiration from the music/rhythm genre. Yet, where Destiny provided players with a helpful selection of power-ups to offset monotony- Diox makes the mistake of lingering on the same note far too long.

On the easiest challenge level, Zombie Slayer Diox requires gamers to duplicate the gesture shown atop each invading undead enemy. Obviously designed to mimic the plucking of guitar strings, an accurately timed swipe of the touchscreen launches at attack from the game’s eponymous character. On higher difficulty settings, zombies become color-coded, demanding players to press a direction on the D-pad in coordination with their simulated strumming. At first, doing both actions simultaneously feels completely awkward. By the game’s final thirty-sixth level, Diox is slightly less cumbersome, but never quite as instinctive as playing a plastic guitar. For southpaws, the game allows participants to alternatively use the 3DS’s face buttons to select colors. 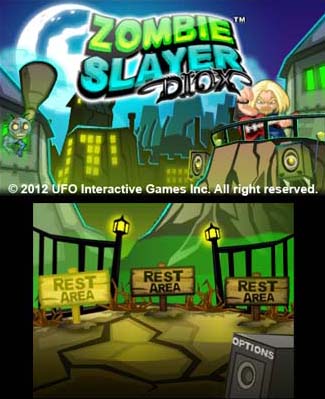 What are the game’s strengths? Although each slash of Diox’s sword produces a fleeting shower of cartoonish crimson, the game visuals are more good-natured than gruesome. From the lead character’s determined stride, satirical backdrops, to the way scores leap from dispatched opponents to the score counter, the game’s visuals are consistently competent. Without the money or memory space for licensed music, Zombie Slayer’s soundtrack offers faux-rocking midi tunes right out of SNES classic Rock N’ Roll Racing. While some might not appreciate the campy chiptunes, gamers familiar with the 16-bit era will reveal in each synthesized power chord.

The title’s three difficulty levels are protracted learning curve allow Zombie Slayer Diox to be played by gamers to wide-ranging experience levels. Initially, the game’s songs will issue forth clusters of corresponding creeps, allowing players to concentrate on timing. Subsequent selections offer an ever-increasing amount of gestures, maintaining a continuous level of challenge. 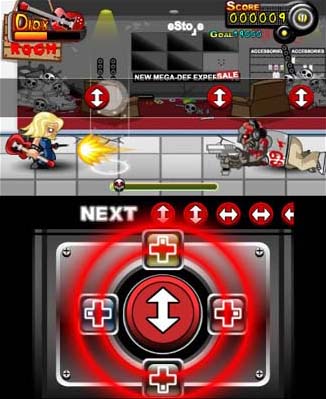 What are the game’s weaknesses? Whereas most rhythmic games offers a subordinate mechanic- from Guitar Hero’s Star Power to the five discrete phases which add nuance to the Guitaroo Man games, Diox’s gameplay is unwavering. Coupled with the three minute-long songs, Zombie Slayer Diox stages’ sink into tedium, as players repeat the basic zombie-killing actions. Ideally, the game would have offered a way to rip through large bands of dissimilarly-coded foes or a second play element which would have complemented the rhythm-ripping sections.

Successful music-based titles establish a strong relationship between the tempo of the music and the action required from gamers. While there is a cadence to Zombie Slayer Diox’s action, the link doesn’t always feel as inherent as it should. As such, levels seldom cultivate a palpable vibe, with a suitable crescendo and climax. Instead, the zombie hordes feel like they approach at a methodical pace. 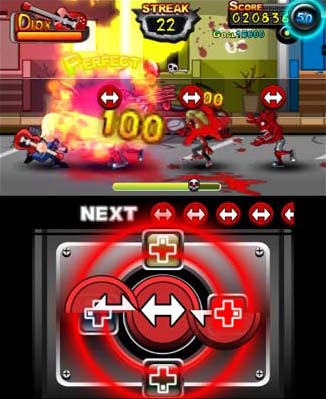 Is it worth the money? As a six-dollar purpose, Zombie Slayer Diox isn’t intolerably expensive- but the title isn’t particularly engaging either. While it’s evident that UFO Interactive can extract some attractive visuals out of the 3DS, it would be gratifying if future efforts could offer enough gameplay to match the graphical goodness.