The Legend of Heroes: Trails of Cold Steel PC review 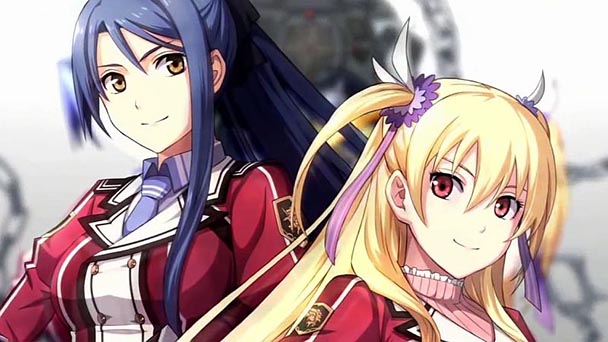 Only a few years ago, the console role-playing game seemed to be in peril, its existence whittled down to a few decisive hit points. Pundits predicted that a combination of escalating production prices, dwindling audiences, and a rise in mobile gaming would eventually form the fateful coup de grâce. But much like role-playing’s resilient protagonists, the genre has bravely fought adversity, and is even enjoying a mild renaissance. From Fairy Fencer F: Advent Dark Force, Tales of Berseria, Criminal Girls: Invite Only, to Project X Zone 2, RPGs might not have the massive following they once enjoyed, but they are hardly scarce.

As inspiring as quality is, it’s the wave of quality that’s truly invigorating, with many contemporary efforts riding a crest of craftsmanship. The latest example of this trend is Nihon Falcom’s The Legend of Heroes: Trails of Cold Steel for the PC, a title previously released for both PlayStation 3 and PS Vita. Building on their success with the incessantly charming The Legend of Heroes: Trails in the Sky series, Cold Steel persists Falcom’s ability at cultivating engaging battle mechanics, an interesting cast of characters, and a game world which truly feels alive. While Estella and Joshua might not be around for this one, Trails in the Sky’s verbose characterization, as well as a healthy amount of Persona 3-inspired mechanics, are likely to win the affections of role-playing aficionados. 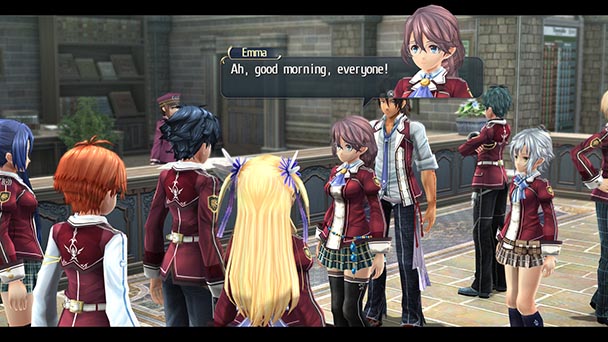 Like most RPGs, Cold Steel doesn’t skimp on metaphor, with the frictions of Class VII replicated on a larger, geo-political scale that threatens to plunge the Erebonian Empire into civil war. Adeptly, the game manages to keep the multiple levels of conflict interesting. Even more remarkable, is the title’s handling of its extended cast. While there’s a slight reliance on trope for characterization, through expended exposition and dialog, Class VII’s student body is given complexity and their social rapport that remains compelling through the title’s 50+ hour playtime. Adeptly, Falcom delivers backstory for each member of its cast, weaving an intriguing tapestry of likable characters. For some, the game’s tendency toward copious amount of inter-character conversations might be off-putting, but like Tales in the Sky, this is Falcom’s method of world building. 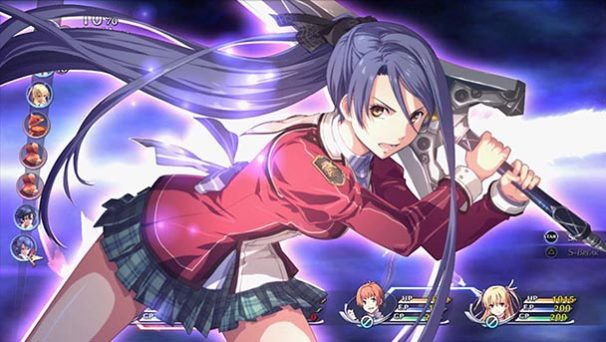 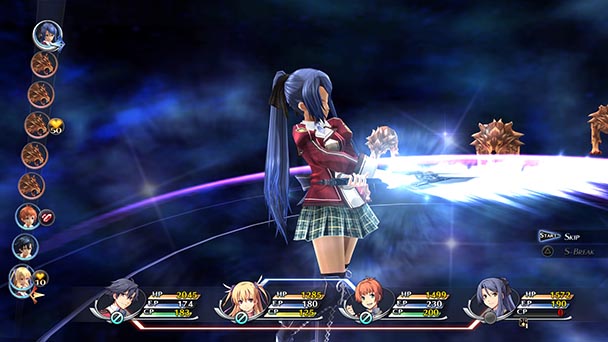 Once back on campus, battling is complemented with bonding with your fellow cadets. Naturally, you don’t have an unlimited amount of time to build rapport, with players able to build bonds with two or three characters. The limitation forces you to determine which friendships are the most essential, and since your affinity with different characters has a significant effect on combat, Trails forces some thorny decisions and forces you to live with them. Ream’s role in the student council in the impetus behind a slew of optional side-quests. Given the magnitude of these errands, it’s conceivable that dedicated players could stretch Trails of Cold Steel playtime past the hundred-hour threshold. 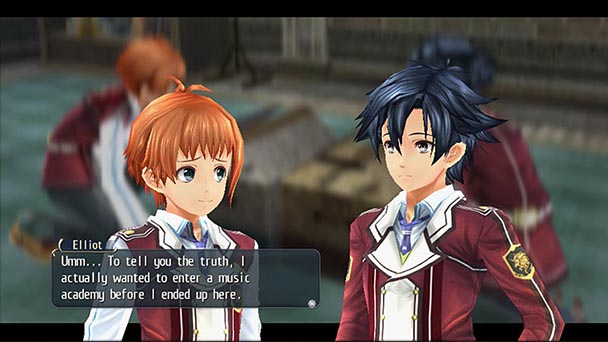 Beyond the occasional austere environment, the title largely excels at Legend of Heroes’ transition to the third dimension. Character design is especially pleasing, with each cadet sporting a richly detailed academic wardrobe, with attire that ranges from stylish blazers, slacks, leggings, and skirts. Likewise, Class VII members express a broad range of emotions, bolstering the game’s sense of sentiment. Nihon Falcom’s melodic dexterity shines here as well, with Cold Steel delivering a number of memorable pieces. The game’s only real aural fault is the reliance on an English dub; while the quality of the voice acting is respectable, too many male characters have a similar speaking style.

As a contemporary role-playing game, players can expect many of the genre’s modern amenities. Except for in the middle of dialog sequences, players can save at almost any time. Random encounters, a role-playing relic, have largely been removed, with visible enemies that can sporadically be avoided. Lastly, the addition of a multi-faceted, in-game encyclopedia is a worthwhile addition, supplying everything from a larger map, to a notebook system which details quests, character bios, dialog, and even battle stats.

Cold Steel’s Transition to PC
With programming prodigy Peter “Durante” Thoman at the helm, it’s hardly surprising to find that the PC port of The Legend of Heroes: Trails of Cold Steel. Substantiating a high level of polish is the game’s launcher, which not only extends a bevy almost any option a modern game could want, but also provides descriptions for each selection. With tick-boxes for visual niceties like v-synch, anisotropic sampling, unlimited draw distance, and depth of field, and well as pull downs for framerate targets, shadow quality, and button prompt, it’s clear that an obsessive amount of care went into the configuration app. Conveniently, you can even adjust the setting via a controller.

But all array of options would be futile if Trails of Cold Steel ran poorly. Fortunately, it’s a wonderfully tuned effort, capable of putting the PS3 option to shame. On our 1050Ti, 1060, and 1070 based-rigs, Trails ran like a dream, flaunting a consistently fluid framerate, a complete elimination of pop-in objects, and shadowing that helped make things look a bit more natural. Although we strove to find a graphical blemish, none could be found. Given the quality of the effort, we really hope that XSEED makes it an effort to keep Durante on the company payroll. 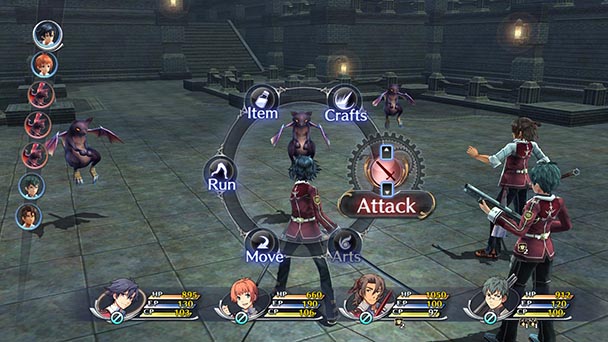 While the game’s verbosity might not agree with all gamers, there’s no denying that The Legend of Heroes: Trails of Cold Steel is one of the better role-playing experiences of recent history. Demonstrating Nihon Falcom’s proficiency with the genre, the title’s mixture of absorbing combat and poignant characterization is destined to delight fans. As long as the genre continues producing titles of this caliber, role-playing is poised to remain resilient.

The Legend of Heroes: Trails of Cold Steel was played on the PC with review code provided by the publisher.

The Legend of Heroes: Trails of Cold Steel
Platform: PC, previously released on PlayStation 3, PS Vita
Developer: Nihon Falcom
Publisher: XSEED Games
Release date: August 2nd, 2017
Price: $39.99 via Steam. On sale for $35.99 through 8/9/2017
The Legend of Heroes: Trails of Cold Steel PC review
Only a few years ago, the console role-playing game seemed to be in peril, its existence whittled down to a few decisive hit points. Pundits predicted that a combination of escalating production prices, dwindling audiences, and a rise in mobile gaming would eventually form the fateful coup de gr&acirc;ce. But much like role-playing&rsquo;s resilient protagonists, the genre has bravely fought adversity, and is even enjoying a mild renaissance. From Fairy Fencer F: Advent Dark Force, Tales of Berseria, Criminal Girls: Invite Only, to Project X Zone 2, RPGs might not have the massive following they once enjoyed, but they are&hellip;

Summary : With The Legend of Heroes: Trails of Cold Steel, developer Nihon Falcom solidifies their reputation as one of the premier role-playing production houses. Now PC players can enjoy the same mammoth time sink console and portable owners played- courtesy of this altogether proficient port.