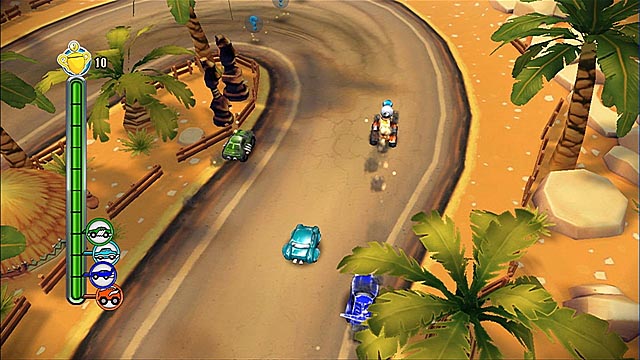 What is the concept? One of the more remarkable racers during the 8 and 16-bit eras was Codemaster’s Micro Machines franchise, which delivered frenzied competitions from a distinctive overhead perspective. Although subsequent series entries were created for the PSOne and PlayStation 2, it appeared that careening around corners in tiny vehicles wasn’t compelling enough to mandate additional full-priced, disk-based releases. Published last year on XBLA, Keen Game’s TNT Racers seems eager to remedy that omission, adding a robust selection of weaponry to complement the diminutively-sized driving.

Highlighted by cartoonish visuals and a jovial ragtime soundtrack, the game’s miniature motorists whip around a variety of outdoor environments- from flora-filled jungles to dusty deserts. Just as varied is the title’s vehicular selection, which a selection of roadsters, racing cars, and even hovercraft which each exhibit slightly different driving models. Less diverse is the TNT’s gameplay which attempts to offer more than mere circuit sprints, but comes up vanishing in the middle of the racing pack. 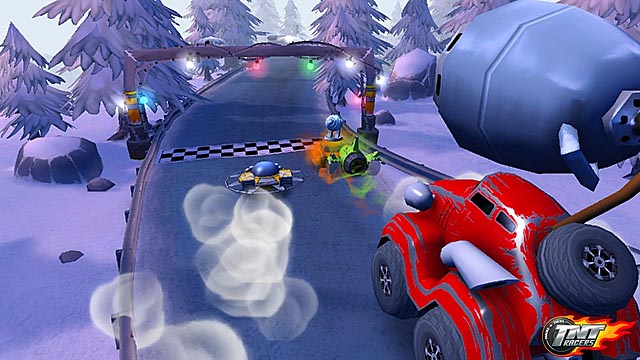 What are the game’s strengths? TNT Racers’ arsenal of wacky weaponry proves to be consistently enjoyable and surprisingly intricate. While routine items like vehicle-mending toolkits and the Speed Booster often appear across the game’s selection of courses, the title also contains a number of exceptional devices. Players looking to sabotage a speedy rival can launch a weighted plunger on their back bumper or use the Time Machine to initiate a brief increase in game speed to confuse opponents. Cleverly, carrying pick-ups slows your car a little- encouraging players to consider jettisoning any tools that aren’t immediately necessary.

Instead of instantly eliminating unsuccessful players from a bout, some variations allow players to return as shadow drivers. Although these ethereal motorists can’t win races, they can still acquire coins and unleash havoc on fellow competitors. Considering that the game’s AI drivers are no pushovers and use pick-ups prudently, gamers will likely see a fair amount of playtime behind the wheel of these vengeful vehicles. 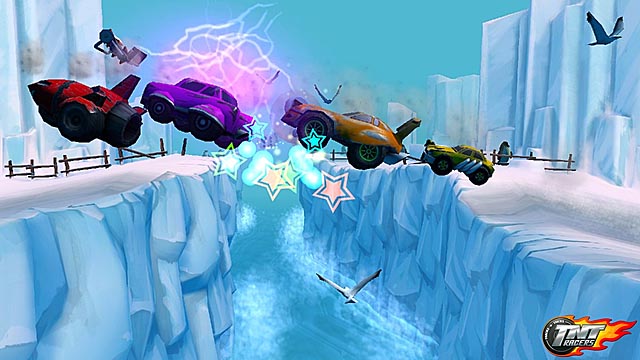 What are the game’s weaknesses? Despite having a pleasing election of eighteen tracks, TNT Racers might not offer enough variety for solitary players. While the game attempts to augment its dashes to the finish line with point-based deviations which task drivers with collecting coins littered across the track or razing other cars, an undeniable homogeneity persists across each match.

Regretfully, TNT’s camera can stymy players at the most inopportune times. When leading in front of a pack of racers, the perspective zooms out- revealing imminent obstacles and the upcoming turns. However, tighter heats bring the camera closer, making a single errant calculating devastating. Although track memorization can help offset these woes, they go against the game’s otherwise agreeable nature, which welcomes pick and play opposition. 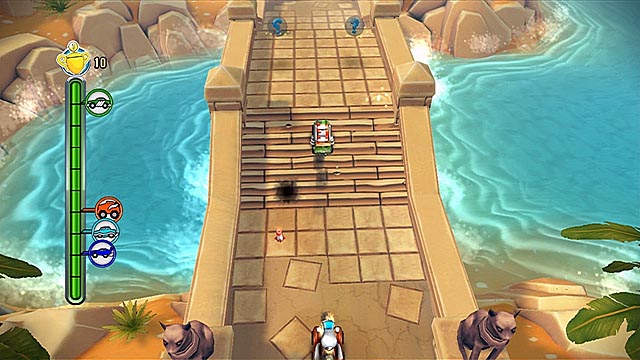 Would I enjoy this game? For players pining for some old-fashioned Micro Machines-esque action, TNT Racers capable competitions are ideal for a room full of local competitors. Although the title’s online matches benefitting for uncomplicated match-making and a lack of lag, the present lack of participants is a bit disheartening. While one might expect to witness bustling activity three days after launch, I sporadically would have to wait a few minutes for a competitor to come online.

At its current $10 price, TNT Racers offers a decent amount of value to fans of breezy, lightweight racing action, but less passionate players may want to wait for a sale that could bolster the amount of participants in the title’s online constituency. 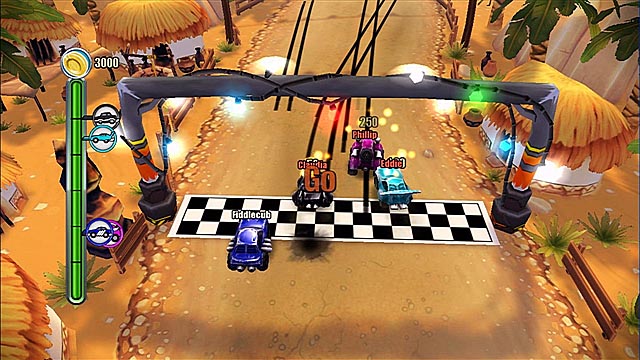 A copy of TNT Racers for the PS3 was provided by the publisher for review.

Previous: New Releases for the Week of January 8, 2012
Next: NFL Blitz Review