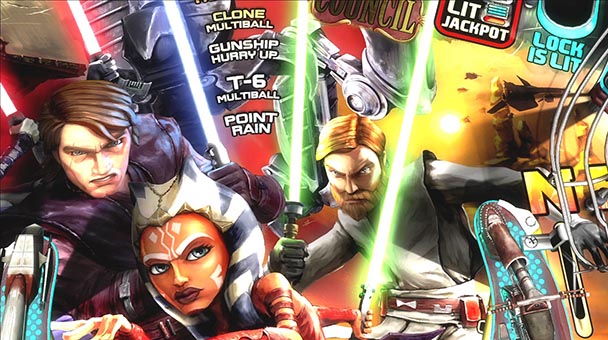 When 2007’s Pinball FX was released for the Xbox 360, critics had a common stickling point: the steel-ball simulation failed to recreate actual machines. Although Zen Studios has yet to fulfill that wish, over the years the developer has offered a commendable concession. From the creation of Street Fighter II and Ninja Gaiden-themed tables to designs based around Plants vs. Zombies as well as Marvel Comic superheroes, digital downloads has brought a number of notable IPs to both Pinball FX 2 and Zen Pinball 2. The release of Star Wars Pinball for the 360 and PlayStation 3 sustains Zen’s efforts- delivering a pleasing collection of tables based around Lucas’ recently bequeathed legacy.

Prudently, the anthology draws from fan-favorite Star Wars Episode V: The Empire Strikes Back, offering one machine based around the 1980 film and another based on the movie’s subordinate villain Boba Fett.  After pulling the plunger to send the ball careening across the Empire table, players might make the mistake of deeming the machine to be a bit too sparse. At the start of every game, the orb will descend to the lower portion of the field – a region that draws inspiration from the tables of the ‘80s and early ‘90s. Yet, hitting the illuminated ‘Star’ and ‘Wars’ targets gradually opens up the playfield, permitting players to select missions that are accompanied by dazzling faux-LCD film clips. Here, gamers can select from six multipart undertakings such as eliminating a squad of stormtroopers or bringing down an AT-AT to its knees. One challenge even offers a first-person perspective, as players use to flipper and launch button to manipulate Luke’s lightsaber and evade Vader’s attacks. 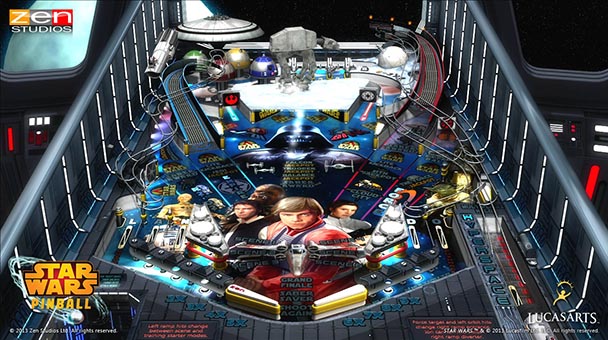 Echoing the speed of the jet-pack darting antagonist, the Boba Fett table dazzles players with its sheer sense of speed. With a wealth of wire ramps on the edges of the field as well as an abundance of scoring alleys and drain lanes, the board plays swiftly and feels persistently perilous. Smartly, the designers provide players with a few perks to keep the table from becoming provoking. While gates that block the side gutters are commonplace, pinball devotees will be surprised when the main character uses his fiber cord whip to save the ball from plummeting down the main hole. Beyond the possibilities for earning lucrative combo multipliers and multi-ball play, Boba Fett also provides players with a gratifying selection of contracts from Darth Vader or Jabba the Hutt.

Star Wars Pinball’s biggest surprise is the Clone Wars playfield, which delivers a dazzling mix of reckless speed along with an uncluttered midfield which hosts an ample number of scoring targets. Like the Boba Fett table, Clone Wars has an agreeable assembly of wireways, which push the ball around the playfield. Beyond offering four main flippers, the top part of the field even hides a mini-table, where the game zooms in, allowing for a maniac shooting session against training clone targets. Once gamers spell out “council” they are able to accept missions which emulate the plotline of the television series. 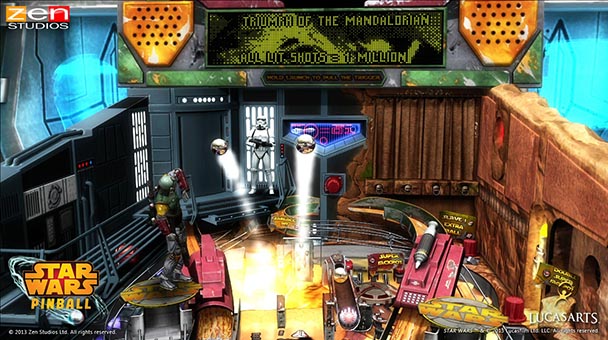 Visually, Star War Pinball maintains Zen Studios’ pinball pedigree, providing a faultless sixty frame per second delivery, even amidst multi-ball play or picture-in-picture effects. Three dimensional models for Fett, Vader, Skywalker, Hutt and others are agreeably rendered and energetically animated, complementing the more traditional coin-operation mechanics. Like Zen’s previous offerings, players may turn off some of the enhancements, such as the scoring sums that pop up around the field. Undeniably, Star Wars Pinball is bolstered by its prodigious soundtrack, which combines John Williams rousing score, sound effects culled from source material and well as voice work recreated by capable imitators.

Given the popularity of the IP, Star Wars Pinball’s sole downside is forgivable: players receive a set of three tables, instead of Zen’s customary quartet. Save for that quibble, the ten dollar download is a worthwhile purchase, prolonging the developers’ proficiency at crafting pinball simulations. Even those who don’t wouldn’t know a Wookie from Wicket W. Warrick should be able to enjoy this gratifying compilation of tables. 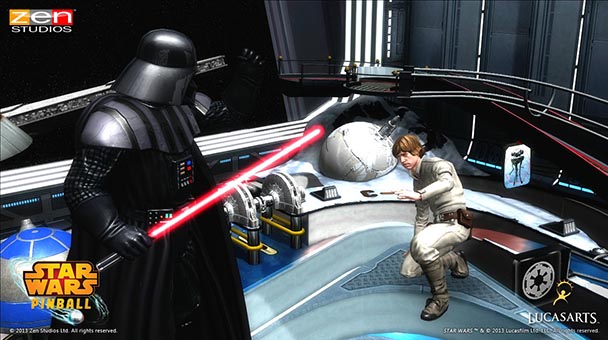