Return to PoPoLoCrois: A Story of Seasons Fairytale 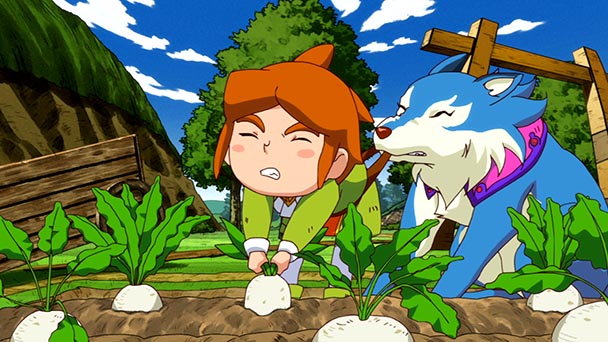 Browse Metacritic and you’ll probably uncover of couple of Return to PoPoLoCrois reviews where the critic sheepishly admits not having played any of the Harvest Moon games. This is not going to be one of those reviews.

On the contrary, I’ve devoted an embarrassing amount of time to Yasuhiro Wada’s creation, becoming hopelessly ensnarled in the gameplay loop of tilling, planting, watering, gathering, and selling. Year after year, I met with Natsume’s resident Bokujō Monogatari (Harvest Moon’s Japanese moniker) expert at E3, discussing esoteric changes to your tool set, variations in romantic pursuits, and the senseless sanitizations made for the Western release. Playing each new Harvest Moon/Rune Factory game wasn’t enough for me, I even ventured toward knock-offs like Sheppard’s Crossing– a title so outrageously bland, that the internet barely remembers its existence. 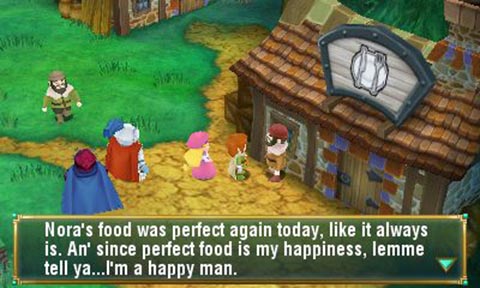 But here’s the terrible little secret about the franchise: Harvest Moon demonstrates less improvement in each successive entry than even the most stagnant sports franchise. Change is measured in the slightest minutia, with many of the series’ core tenets remaining the same across Moon’s massive twenty-year legacy. In a nutshell, that’s what makes Return to PoPoLoCrois: A Story of Seasons Fairytale so promising. It’s the first farming title to radically change things up, by introducing role-playing elements from the long-running PoPoLoCrois property,

While the Rune Factory games have brought direct antagonism into the farming framework, the action-oriented combat never felt nuanced. Likewise, plots drew from Harvest Moon tradition, offering solid characterization but without any semblance of a stirring storyline. 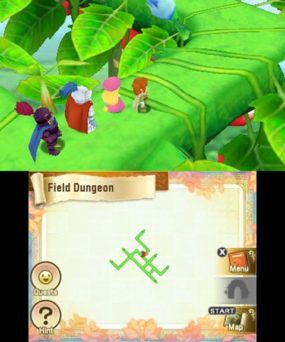 Cultivation and combat were largely means to their own end, absorbing gamers in little more than an engrossing albeit endless cycle. Return to PoPoLoCrois’ ambitions are grander, with Tokyo-based developer Epics, Inc. merging conventional role-playing storytelling and combat with Harvest Moon’s time-tested mechanics. The union might not be flawless, but the deviation from form is wholly gratifying.

If you didn’t play the 2005 PSP release of PoPoLoCRoIS, fear not. The localized version was a Frankenstein-ed trilogy that detailed Prince Pietro’s tenth, twelfth, and fifteenth year of life. Return to PoPoLoCrois tells an entirely new tale of his extraordinary thirteenth year, which begins innocently enough at his regal birthday celebration. Although the tone of the festivities are generally joyous, an enigmatic visitor from a far-flung empire warns of the emergence of Black Beasts plaguing her realm. Unsurprisingly, Pietro’s soon finds himself in the trapped in the plagued province, with destiny picking the young prince as the realm’s redeemer. 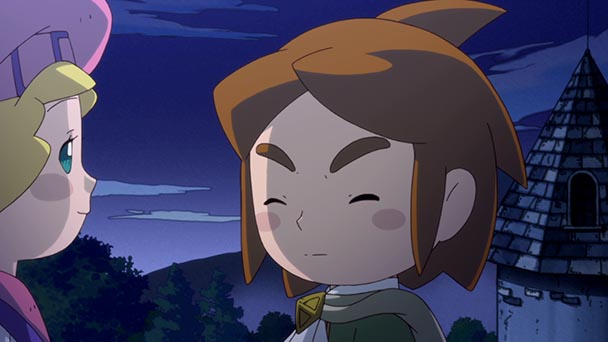 In execution, the story isn’t complex, nor does it need to be. Pietro is a reminder of the genre’s past, before angsty, indisposed heroes become the norm. He’s persistently energetic and thoughtful, and like any respectable RPG character, up for the occasional valiant risk. His relationship with Narcia, a young witch, is rendered with innocent romantic charm, while secondaries like the White Knight and former heel, Gami Gami Devil add a bit of storybook-like eccentricity to the title.

Another memento of the genre’s golden era is Return to PoPoLoCrois’ refusal to be rushed. Save for a bit of slogging on a derelict plot of dirt, the game doesn’t allow players to jump right into farming, pressing players into become attached to the plot and the game’s role-playing mechanics. Four hours in, when you finally do get a chance to tend to the land, Return to PoPoLoCrois rarely compels you to focus on farming. Instead, it’s an optional pursuit, presented as a break from the game’s dungeon crawls and as a method to earn a bit of additional coin. 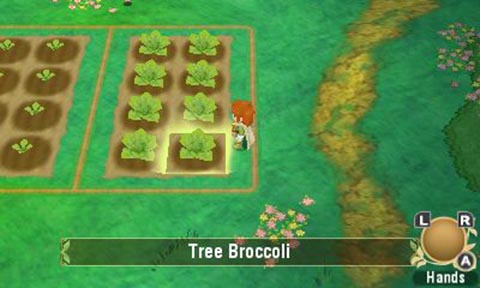 Horticulture is streamlined, with many of Harvest Moon’s intricacies and delicate crops tempered. That means mainstay mechanics like variable weather and even the withering of neglected crops are discarded, while your upgraded toolset makes upkeep easier. While Bokujō Monogatari maniacs might be distressed by the simplification, it’s a prudent design decision, allowing gamers to teleport back and forth between main quest and cultivation. Similarly, the game’s handling of time is adept, with the period between replanting and reaping ideal for either a bit of exposition or a short expedition. Even if you do get a bit too involved, Return to PoPoLoCrois will provide warnings when your produce is in peril.

Much like gardening, combat is kept simple- extending turn-based battles that are accessible and breezy. Random encounters pit parties against a horde of monsters on a grid, with players able to swiftly move and attack thanks to a color-coded system that reveals effective ranges. Spells rouse a bit of strategy, with players forced to think about AOE zones, attack vectors, as well as the occasional cone-shaped assault. But save the intermittent boss encounter, conflict errs on the easy side, with players able to auto-battle and even adjust the encounter rate. 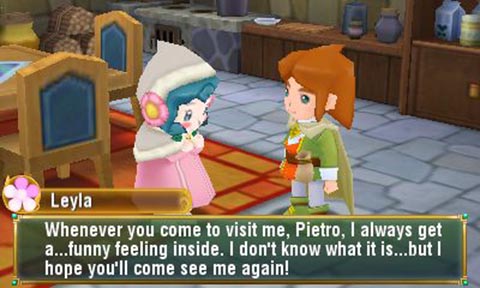 Visually, Return to PoPoLoCrois makes the most of the 3DS stereoscopic capabilities, offering interiors and landscapes that flaunt multiple levels of depth. While some characters vaguely look like Nintendo Miis, they display a pleasing range of emotion and animate fluidly. Periodically, players are even treated to a fully animated cutscene, but unfortunately, these interludes seem all too brief. Sonically, the game provides both English and Japanese voiceovers, although gamers wont get to hear every line vocalized with some dialog summarized by one word spoken responses. Unlike the typical sterile synthesized MIDI scores that accompany many portable RPGs, PoPoLoCrois’ soundtrack feel organic, with instrumentation that can sound like a like performance.

If Epics is hoping to convert Return to PoPoLoCrois into a franchise, there’s certainly room for improvement. The game’s biggest transgression stems from a lack of graphical diversity. Dungeons use a limited amount of assets which doesn’t foster the sense of discovery. Even worse are the layouts, with the narrow labyrinthine hallways having far too many dead-ends. 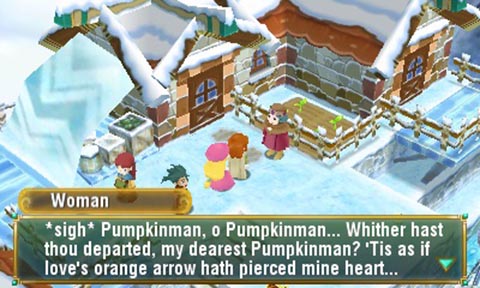 Likewise, the game’s boss battles can be a bit underwhelming thanks to asset recycling. Those who appreciated fining their ideal mate in Harvest Moon might be displayed to find that Narcia is your requisite interest. Sure, you can incite friendships with other ladies, but there’s little incentive for doing so.

But these minor quibbles barely soften Return to PoPoLoCrois: A Story of Seasons Fairytale’s charms. With a pleasing plotline and the lure of light agribusiness sim, Epics Inc. has planted the seeds for a promising series. In many ways, it feels like after years of minimal upkeep, Bokujō Monogatari has finally blossomed, with the faint promise of perennial fruits for us to savor.

Return to PoPoLoCrois: A Story of Seasons Fairytale was played
on the Nintendo 3DS with review code provided by the publisher.

Return to PoPoLoCrois: A Story of Seasons Fairytale
Platform: 3DS
Developer: Epics, Inc.
Publisher: XSEED Games, Marvelous USA
Release date: March 1st, 2016
Price: $39.99 via retail or eShop
Return to PoPoLoCrois: A Story of Seasons Fairytale
Browse Metacritic and you&rsquo;ll probably uncover of couple of Return to PoPoLoCrois reviews where the critic sheepishly admits not having played any of the Harvest Moon games. This is not going to be one of those reviews. On the contrary, I&rsquo;ve devoted an embarrassing amount of time to Yasuhiro Wada&rsquo;s creation, becoming hopelessly ensnarled in the gameplay loop of tilling, planting, watering, gathering, and selling. Year after year, I met with Natsume&rsquo;s resident Bokuj&#333; Monogatari (Harvest Moon&rsquo;s Japanese moniker) expert at E3, discussing esoteric changes to your tool set, variations in romantic pursuits, and the senseless sanitizations made for the&hellip;

Summary : Blending of genres can occasionally feel forced, but Return to PoPoLoCrois: A Story of Seasons Fairytale merger of role-playing and farming doesn’t veer far from the merits of Mana Khemia and the Atelier series.