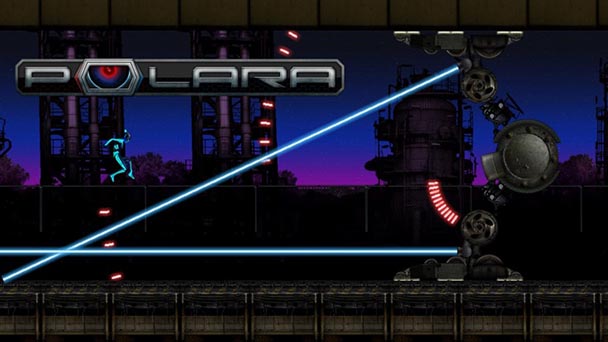 The term ‘endless runner’ is a bit of misnomer. Fundamentally, games that fall into the genre grow progressively more challenging- to the point where difficulty eventually outstrips our visual acuity, reaction time, and coordination skills. And that moment, perpetuity is annulled as players are inevitably propelled to the ‘game over’ screen.

Undoubtedly, those who take a cursorily glance at Polara might mislabel the recently released downloadable title as another two-dimensional endless runner. As Hope This Works Games’ sophomore title (following 2011’s iOS puzzler, Kunundrum) the game shares a number of mechanics with popular games like Vector and Canabalt HD. But Polara forges distinction by extending a comic book-styled narrative, discrete stages, and ingenious level design that divorce it from contemporaries. Whereas, many of the game’s free-to-play contemporaries feel designed to push in-app purchases, Polara is more of a traditional game experience. 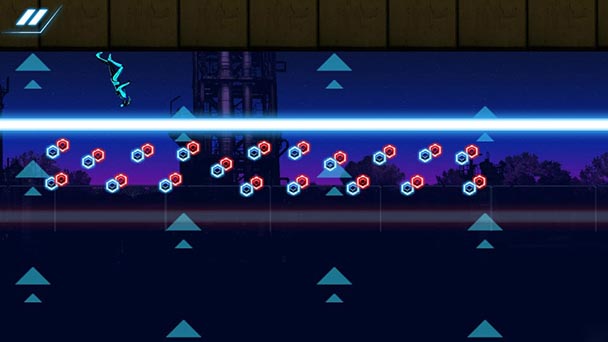 Given the diminutive size of the game’s 730 block footprint, players might not expect Polara to convey much in the way of premise. But the game’s decidedly dystopian context, which a describes world divided into a working class and a parasitic bourgeoisie, is destined to draw comparisons to The Matrix’s exploration into classical Marxism. Sure, the impact of Polara’s still images are restrained by the fidelity of the 3DS’ top screen, but there’s certainly gravitas when we learn of lead protagonist Lara’s background. Initially reluctant to assist a rebel faction with acquiring the bio-defense suit, her allegiances turn when the group reveals photographic evidence that her father was murdered.

Whereas most game narratives feel an obligation to divulge every small detail, Polara succeeds by allowing gamers to fill in the gaps. As such, the expositional cutscenes that bookend each collection of stages feels laconic rather than loquacious, endowing the game with an engaging impetus that doesn’t sabotage the pace of Polara’s speedy stages. 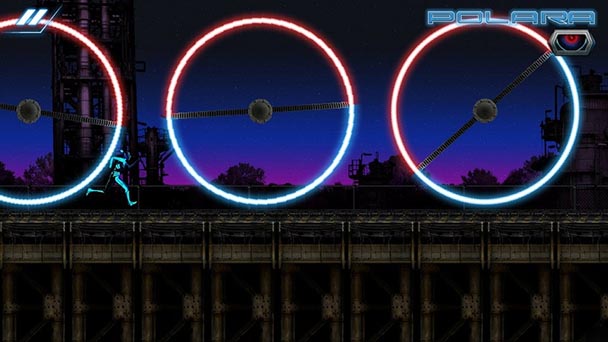 But narrative is only a small part of the game’s strengths, with playability also praiseworthy. Using either the shoulder buttons or a combination of analog stick and face bottom players can issue two commands. The first is the obligatory part of any platformer- a jump that allows Lara to clear gaps, obstructions, or move to different levels of the side-scrolling environment. The other control element shifts Lara’s suit between red and blue, allowing her to bypass correspondingly-colored defense systems.

Initially, Polara presents conventional obstacles, allowing players to acclimate to their input method of choice. But soon, the predictable cadence of alternate-colored barriers give way to additional variances. Soon, you’ll have to deal with more than the on-screen enemy who launches a wave of crimson or cobalt-hued projectiles. Treadmill-like segments can slow or propel you depending on affinity, while color switching can make platforms appear or disappear. Later, the two tints change the direction of gravity allowing Lara to run along the top part of the screen. Polara also likes to keep players on their toes, mixing each component into levels that demand your undivided attention. Naturally, there’s also the occasional boss battle, where picking up the appropriate colored icon damages the belligerent baddie. 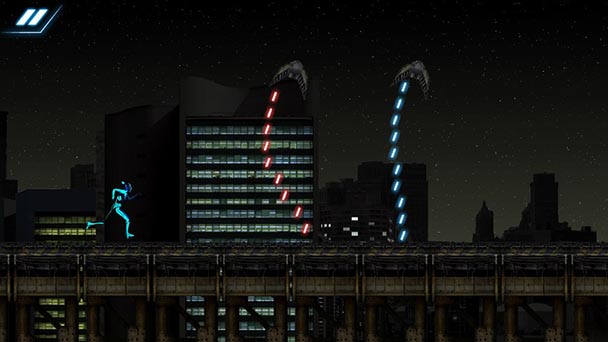 Inevitably, failure will occur with Polara’s end-of-level recap articulating the exact number of deaths. But largely, the game shirks frustration thanks to a liberal supply of check points throughout each stage. More importantly, the pre-designed levels offer a fleeting intermission, allowing Polara to avoid the tedium of most endless runners. But for those do want to test their endurance, the title offers a number of unlockable modes with one generating the type of randomized, continuous challenges that are familiar on mobile platforms.

Visually, the title doesn’t offer many frills. Lara and the game’s defense system are rendered in neon-colored colors which stand out against the muted backgrounds. While a few corners were cut in the character’s running animation and in boss explosions, the shortcomings aren’t too detrimental to the game’s atmosphere. Musically, Polara’s soundtrack attempt to generate a sense of urgency with its synth and snare combinations, but ultimately the tracks tend to be a bit forgettable.

But Polara’s decidedly average aesthetics should be contrasted with its reasonable five-dollar price. While the game’s output might not be drop-dropping, there no denying that the game is surprisingly engaging, especially in short doses. Players seeks a title that tests reflexes and visual awareness should consider giving the title a try.

Polara was played on the 3DS with review code provided by the publisher.

Summary : Polara’s looks might be middling, but the game’s mechanics and level design are remarkably polished for a downloadable 3DS title.