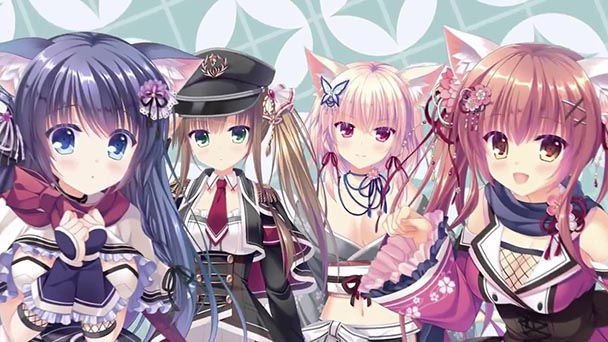 Purportedly influenced by nekomata, the feline-like yōkai present in Japanese mythology, cat-girls have a fairly extensive history. In the 1960s, manga like Hakaba no Kitarō (Kitarō of the Graveyard) began showcasing a young woman who would turn into a cat/human hybrid when upset. In the ensuring years, an appreciation for animalistic qualities grew, with works like Dominion Tank Police, Outlanders, and Tokyo Mew Mew each having characters with feline-like features. Notably, Darkstalkers: The Night Warriors brought nekomimi to new audiences, with Felicia’s pugnacious paw-play enchanting a generation of arcade goers.

But over the last few years, cat-girls seems to have reached critical-mass. In 2014, Sekai Project brought three volumes of NEKOPARA stateside, finding an audience eager to adopt the idea of a family of neko helping to run a confectionary. Subsequently, a Kickstarter to translate the visual novel into anime form was a rousing success, with backers providing nearly a million dollars to create an OVA. Hoping to capitalize on the trend, Sekai has doubled down, localizing Whirlpool’s NEKO-NIN exHeart. Although attractive and playful at times, a simplistic storyline means that the novel will mostly appeal to those with an unapologetic case of cat-fancy. 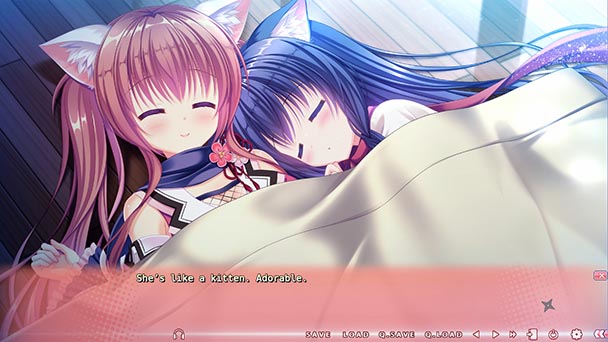 NEKO-NIN’s prologue establishes a promising mythos, telling of an era when ninja neko formed alliances with humans, with the demi-humans functioning as shinobi, protecting those in power. But in a modern context, the need for ninjutsu appears to have waned. As such the game’s two fuzzy-haired leads, Yura and Tama, venture from their village to a city, poised to fulfil a pact. When they arrive, neko duo are famished and fatigued, yet eager to serve their new master, a young man named Haruki. For some, the backstory will be more interesting than the novel’s extended foray into wish fulfillment.

Woefully, the first hour and a half of NEKO-NIN exHeart is rooted in a mundane cycle of empathy and indifference. Confused by the emergence of cat-girls showing up outside his door, Haruki is reluctant to feed them, despite learning of their three-day journey without food or water. Eventually, compassion arises, and when fed, the pair ravenously consume every edible in the house. It’s a lightly comic sequence, but when Haruki shifts between indifference and compassion several more times, identification with the protagonist becomes difficult. That said, the early novel isn’t without its charms. When the neko exhibit their skillset, using ninja magic to hide their cat-like quality and shirk suspicion, exHeart is capable of entertaining. But largely, satisfaction comes from eXHeart’s world-building and character background, rather than the banter between the leads. 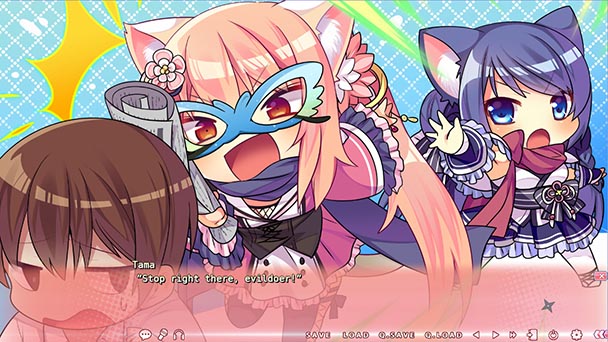 Inevitably, Haruki relinquishes his resistant attitude, cultivating a bit of romance. In the Steam version, that means a kiss and caress. But for lascivious-minded, Danpasoft sells a five-dollar patch which exhibits the liaisons in non-mosaiced detail. Whether implied or explicit, the interlude effects the protagonist, making the second half more enjoyable. Mechanically, NEKO-NIN exHeart comes close to being a kinetic novel, with only two choices offered during the read and a single ending.

Visually, NEKO-NIN exHeart’s artwork is adept, with a pleasing level of detail applied to the novel’s characters and multitude of backdrops. Expectedly, interactions are highlighted by CGs that show the cast in chibi form, adding a bit of variety of the experience. Animation and expression is a bit sparse. Beyond basic changes to each characters’ face, Yura and Tama fault the occasional ear twitch. Sonically, the novel’s voice acting is appropriately adorable, with the soundtrack helps to provide a light-hearted undertone. With rushed, gaffe-prone localizations becoming a worrisome norm for the industry, it’s pleasing to see an error-free adaptation with this title. 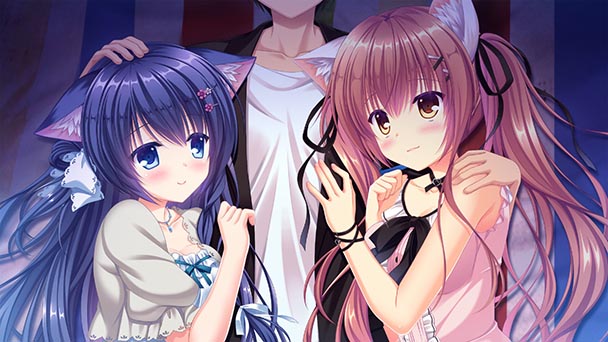 Destined for comparison that with other cat-girl game, NEKOPARA, NEKO-NIN exHeart is a suitable, second-string alterative. Predictable at first, exHeart gradually shows its playful side, mirroring the qualities of an aging tabby. Kemonomimi fans will probably take to it like a spool of yarn, but those who aren’t as enamored by the cat-girl hybrids will want to wait for a price reduction.

NEKO-NIN exHeart was played on PC with review code provided by the publisher.

NEKO-NIN exHeart
Platform: PC
Developer: Whirlpool
Publisher: Sekai Project
Release date: April 21st, 2017
Price: $9.99 via Steam
NEKO-NIN exHeart review
Purportedly influenced by nekomata, the feline-like y&#333;kai present in Japanese mythology, cat-girls have a fairly extensive history. In the 1960s, manga like Hakaba no Kitar&#333; (Kitar&#333; of the Graveyard) began showcasing a young woman who would turn into a cat/human hybrid when upset. In the ensuring years, an appreciation for animalistic qualities grew, with works like Dominion Tank Police, Outlanders, and Tokyo Mew Mew each having characters with feline-like features. Notably, Darkstalkers: The Night Warriors brought nekomimi to new audiences, with Felicia&rsquo;s pugnacious paw-play enchanting a generation of arcade goers. But over the last few years, cat-girls seems to have&hellip;

Summary : A premise of cuddle-craved, ninpo-trained cat girls showing up on your doorstep seems inspired. But distressingly, NEKO-NIN exHeart squanders too much time resisting their advances.