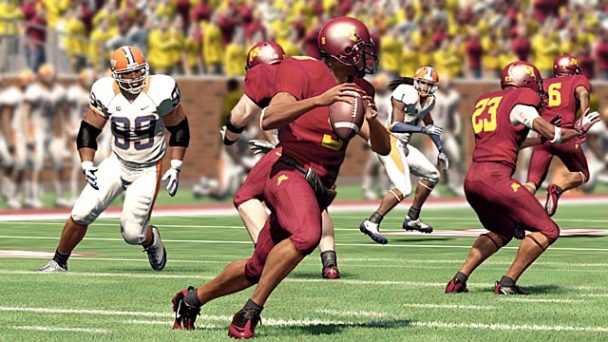 Since its inception as Bill Walsh College Football in 1993, Electronic Arts interpretation of collegiate athleticism has doggedly attempted to recreate every last minutiae of the sport. From acquiring the NCAA license during the last ‘90s, integrating beloved fight songs, and meticulously modeling each of the 124 FBS stadiums, the rechristened franchise has grown in leap and bounds. Yet, with so many of college football’s fundamentals covered the last few annual iterations of the game have delivered lesser tweaks rather than wide additions. NCAA Football 13 shows the series offering up both the requisite tweaks, but also adding a number of embellishments which reject rigid authenticity in the name of enjoyment. Although the decision is as unanticipated as an opening drive hook and lateral, most of EA Tiburon’s additions prove to be productive.

Throughout the franchise’s two decade long history, gamers have longed for the inclusion of actual athletes. Yet, with NCAA restrictions on names and likenesses, precise player recreations are prohibited. Instead, NCAA Football 13 includes the Heisman Challenge, which cunningly depicts the collegiate careers of NFL pros, past and present. While it’s gratifying to take the field as Barry Sanders, Carson Palmer, Marcus Allen of ten other renowned players (Gamestop preorderers receive access to Matt Leinart, Tim Tebow, and Mark Ingram) , without vintage uniforms or stadiums, the Heisman Challenge veers from verisimilitude. Still, for those willing to forsake authenticity, being able to put Robert Griffin III on a Division 3 team offers an intriguing ‘what-if’ scenario, as each athlete tries to match his real world statistical triumphs. 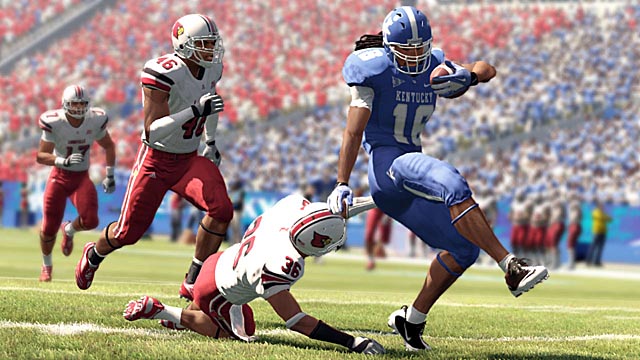 While the game’s Dynasty mode largely remains the same as the component in last year’s version, a few minute changes will be noticed by methodically-minded GMs. Using resources to scout potential diamonds in the rough or avoid courting a potential bust offers an interesting risk/reward element while pitching to potential recruits is now guided by a dynamic system of algorithms, modeling everything from conference prestige, television exposure, to the proximity to an athlete’s home. While most players might not delve deep enough into Dynasty Mode to notice the changes, NCAA Football fanatics should appreciate the adjustments.

Both the title’s Road to Glory mode, where gamers direct a prodigious high school player through their university career, as well as the aforementioned Heisman Challenge flaunt another of the game’s departures from strict simulation- Reaction Time. Allowing players to slow down events in order to evade an imminent tackle or carefully scan your receivers, the concept seems culled by the engaging arcade mechanics popularized by titles such as NBA Jam or NFL Blitz. In execution, Reaction Time is discriminatingly integrated, prohibiting the system from being the focus of the game, as gamers are given a diminutive amount of the resource after each successful play. NCAA 13’s other alteration to Road to Glory is the inclusion of multiple challenge settings, with higher levels paying out more XP dividends and earning a coach’s confidence at a quicker rate. 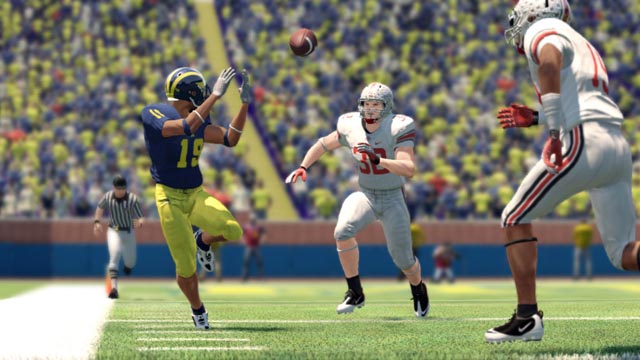 NCAA Football 13’s largest on-field revision is an overhaul of the passing game. Whereas previous iterations in the franchise often felt like you were offering general suggestions to the QB, this year players can throw the ball with all the accuracy your simulated athlete can muster up. This year’s Total Control Passing allows players to use the left stick to guide the pigskin into a defender-free pockets, where a directed receiver awaits with expectant hands. Coupled with the game’s twenty different pass trajectories, throw animations, and bevy of dropback animations, each passing attempt in NCAA 13 looks and feels distinctive.  Elsewhere, icons disclose a receiver’s awareness level while defensive players must see the ball before they are able to react, eliminating the precognitive DBs and LB’s that would make some implausible swats or tackles. Yet, despite all these changes interceptions occur with dubious frequency.

Visually, NCAA 13 is top-notch, with 80 new stadiums, mascots, trophy presentations, uniform updates, and fervor-building team entrances. Studio updates from ESPN’s Rece Davis as well as relevant ticker updates contribute to the game’s television-quality presentation, which is only soiled by diffused grass texture used in replays as well as the occasional graphical oddities, such as the number of fans wearing EA apparel to a bowl game. Although the game’s crowd chants and exuberance is remarkably recreated, the commentary between Kirk Herbstreit and Brad Nessler is prone to repetition and sporadically overlooks key events. 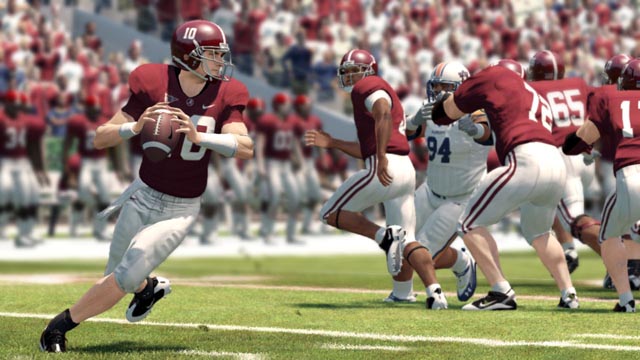 For every modification which hopes to bring NCAA Football 13 one step closer to realistic simulation, there’s another which shirks steadfast realism. It’s a gutsy move which makes this year’s iteration one of the most enjoyable, competitive, impassioned entries in recent series history. Mirroring the heated rivalries which can pack over 100,000 zealous fans in a stadium, NCAA Football 13 should be a serious consideration for fans of college pigskin.