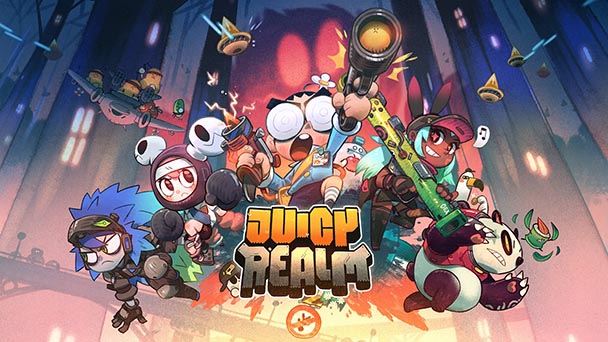 With engaging offerings like The Binding of Isaac, Nuclear Throne, and Enter the Gungeon, there’s no shortage of Rogue-like, twin-stick shooters on Steam. Eager to join the popular sub-genre is Juicy Realm, a title that brings an ample amount of adorability along with the obligatory ammo drops. While the game doesn’t deliver much in the way on innovation, it’s certainly competent and might be worth a purchase, as long as you don’t mind a bit of repetition.

Each run-through commences with the selection of one of Juicy’s four distinct characters, who each carry a primary weapon as well as a secondary device that’s constrained by a cool-down timer. The game’s bespectacled botanist brings a sidearm that resembles a ping-pong ball gun into battle, as well as grenades that can injure tough foes. The boxer has a more realistic looking pistol and the ability to heal herself with a regenerating supply of potions. Players who prefer an offensive edge might opt for the mercenary, who carries a yellow rifle and lay down sentry turrets. Meanwhile, those who favor speed might pick the blue-haired ninja, who carries a saw-like blade, and can stun foes with small autonomous drones that will follow you around. 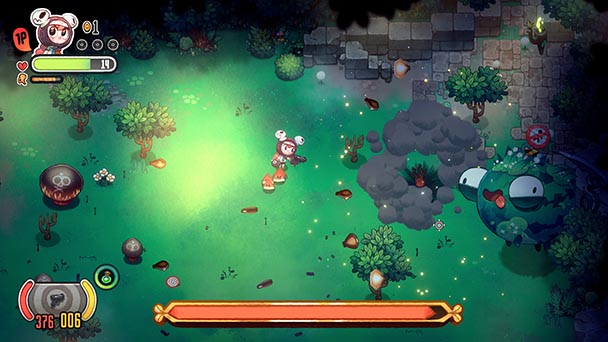 The trek takes players through several of environments guarded by anthropomorphic plants before leading up a boss battle. Here, credit is due for SpaceCan’s artist biboX, who crafts a wonderfully cartoonish territory that’s brimming with personality. From trees that gently sway, rain that sporadically falls, to grassy plains dotted by a lonesome mushroom, Juicy Realm explores the intersection between the organic and the comic book-esque, across its succession of milieus. While there’s not a wide variety of subordinate enemies, the game’s bipedal, gun-toting pear, watermelons, and apples are a visual treat.

Regrettably, fighting them becomes tedious rather quickly. Sure, it’s rather charming when they notice the protagonist, and shuffle toward them before releasing a barrage of firepower. But dodging their slow-moving projectiles isn’t particularly challenging, even when you run recklessly in the middle of a group. On the upside, there is a bit of variability to enemy behavior with opposition like small sprouts clinging onto player, potentially slowing them down. 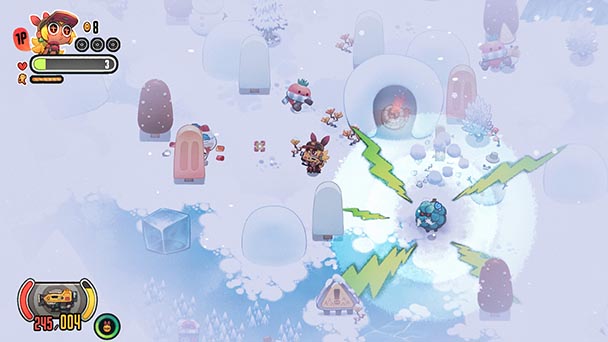 Ideally, randomization would be rooted in the procedurally-generated playfields. But all too often, the environments are homogenous, offering only basic deviations in layout, the scattering of explosive devices, and enemy placement. Another knock against the game is found in the loot system. Instead of giving players access to an increasingly powerful set of tools, you are just as likely to find a less useful weapon as you are uncovering a better one. On the upside, Juicy strikes a good balance between ranged and melee weapons. The former are ideal for maintaining distance from enemies, while the later conserve ammo and can be lifesavers when your magazines run dry.

Boss fights are undoubtedly the game’s highlight, pitting players against gigantic foes that require a bit of ingenuity to defeat. Save for the game’s decision to maintain the attack order of these adversaries, confronting a stomping watermelon or a cake armed with deadly lasers is an enjoyable challenge. Here, the difficulty level feels correct, with a higher level of antagonism than what’s exhibited from the toothless standard opponents. Ideally, the game would throw more of these challenges at players, mixing it up with a few randomized sub-bosses. 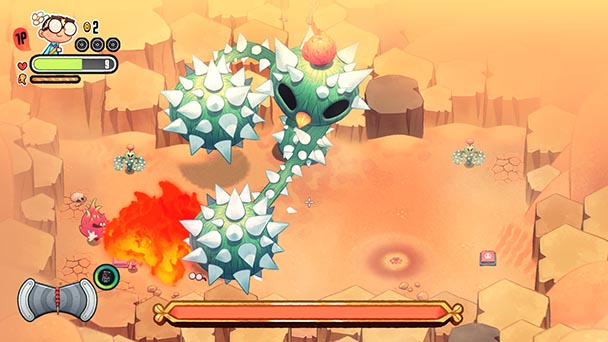 Juicy Realm’s largest downfall is that the game doesn’t thoroughly surpass the competition. Sure, the artwork is a delight and it’s delightfully accessible regardless of whether you play with a controller or opt for a mouse and keyboard combo. But gameplay is where it counts, and here Juicy Realm is slightly inferior. But if you are a die-hard fan of the genre, the game’s evenhanded price makes for affordable apple killing.

Juicy Realm was played on the PC with review code provided by the publisher.

Juicy Realm
Platform: PC
Developer: SpaceCan
Publisher: X.D. Network
Release date: May 3rd, 2018
Price: $9.99 via Steam
Juicy Realm review
With engaging offerings like The Binding of Isaac, Nuclear Throne, and Enter the Gungeon, there&rsquo;s no shortage of Rogue-like, twin-stick shooters on Steam. Eager to join the popular sub-genre is Juicy Realm, a title that brings an ample amount of adorability along with the obligatory ammo drops. While the game doesn&rsquo;t deliver much in the way on innovation, it&rsquo;s certainly competent and might be worth a purchase, as long as you don&rsquo;t mind a bit of repetition. Each run-through commences with the selection of one of Juicy&rsquo;s four distinct characters, who each carry a primary weapon as well as a&hellip;

Summary : Although Juicy Realm's art is gorgeous, it's gameplay doesn't quite measure up. Pick up this dangling fruit only if you're you're still not satiated from other, more robust Rogue-likes.