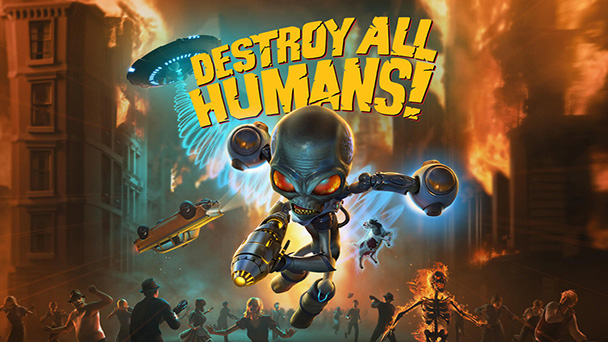 The remake of Destroy All Humans! reminds us that being the bad guy can be a lot of fun, especially when protagonist Crypto 137 can fling people across hillsides. Pleasingly, most of the fluidity of ragdoll tosses and open-world antics have been preserved in Black Forest Games’ Switch port. 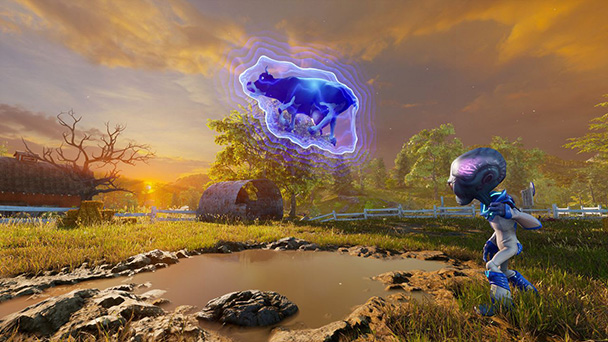 Currently, sandbox-based franchises are abundant, with properties like Assassin’s Creed, Watch Dogs, and Just Cause all letting players loose across vast, open worlds. But it was Los Angeles-based Pandemic Studios that was one of the pioneering influences for the genre. 2005’s Mercenaries: Playground of Destruction provided a sweeping battlefield where players could accept contracts, as well as acquire the tools for mayhem. Once vehicles or firearms were obtained, you were often free to plot your own riotous course. Largely, the departure from linear-based missions felt gratifying.

Pandemic followed up Mercenaries with an open-world title set in the cold-war era1. Blending ground-based and saucer-based hijinks with a healthy dose of irreverent humor, Destroy All Humans! might have lacked the militaristic mayhem of Mercenaries, but doubled-down on the feeling of subversive vandalism. Sixteen years on, Black Forest Games (Giana Sisters: Twisted Dreams, Bubsy: The Woolies Strike Back, Rogue Stormers) Switch port retains the enhancements of the recent now-gen remaster. It’s an update that preserves much of the gameplay and humor of the original, and save for the intermittent archaic mechanic, Destroy All Humans! could nearly pass for a contemporary title. 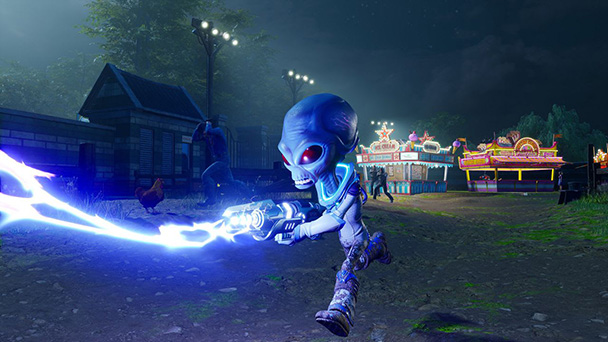 Players take control of Cryptosporidium 137 (aka Crypto 137), a bipedal extraterrestrial with an oversized head and an abhorrence for humans. But he’s arrived on Earth for two undertakings: to save Crypto 136, a colleague who crash-landed and was subsequently captured by the army. His secondary objective is to compete his compatriot’s original quest and secure enough human DNA to prevent his species from growing extinct. As such, Destroy All Humans’ plot rekindles the kind of pulpy sci-fi that captivated movie-goers in the late ‘50s. Here, much of the is rooted in seeing the governmental cover-ups for all your turmoil, which is often blamed on communists.

While some might take issue with Destroy All Humans! equal-offender humor, which pokes fun at positions on the entire political spectrum. Everything from the military, rural communities, and sleezy politicians are receive a spirited skewering. In an era when games are becoming increasingly sanitized and scrubbed of anything that could be interpreted as insulting, I found the satire refreshing. Sure, some of the jokes haven’t aged gracefully, and it’s refreshing to see Black Forest Games preserve the playfulness of the script. 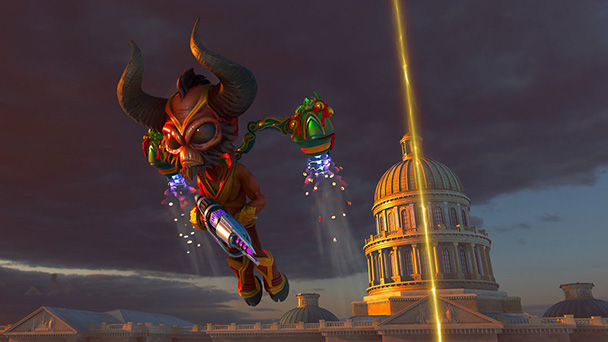 Probing the Boundaries of Good Taste

Fundamentally, much of the gameplay remains just as solid sixteen years after the release of the original. For the first few missions, Pandemic Studios didn’t provide too much autonomy, and these stages act as a tutorial for your mischievous toolset. One of the first powers you’ll earn in telekinesis, capable of grabbing people or animals and flinging them into the horizon. This was persistently entertaining in 2005 and doesn’t lose an iota of enjoyment over decade and a half later. Later, your arsenal will grow, allowing to electrocute groups of people, offering cartoonish x-rays as they twitch from the electrical current. And of course, there’s the anal probe, that doesn’t just culminate in a satisfying head pop, but allows for the collection of DNA, which can be used to augment Crypto’s arsenal.

When DAH! shifts away from pandemonium, things aren’t quite as compelling. You’ll be able to disguise yourself as a human to make your way into restricted areas. When this happens, you can raise the suspicion of humans who will follow you around each of the game’s six environments with relentless determination. After you’ve passed the first few missions, there’s the occasional difficulty spike where the game expects you to tackle adversity in a very specific way. This can be vexing, but quite often the game rewards you afterward with another joke, weapon, or upgrade making exertion bearable. The exception are the game’s culminating showdowns which are exceedingly challenging. 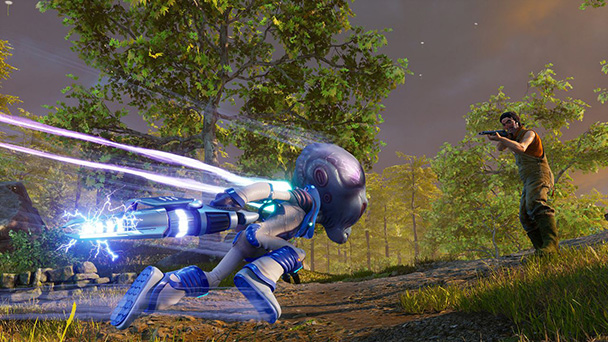 A Solid Showing on Switch

Saucer-based sequences that take up about twenty percent of the game. Although the number of devastating tools at your disposal are fewer, it’s here that Destroy All Humans! flaunts its visual upgrade with some of the best explosions around. These are often mindless sorties, which arrive with less frequency once your spaceship is powered up. But they do provide a pleasing outlet for all the times those pesky humans brought out their elevated weaponry.

Although these sections showoff some eye-pleasing blasts and offer respectable draw distances, they do reveal the Switch sporadically struggling to keep up with its console counterparts. There’s the occasionally bit of pop-in and trees obscure the third-person perspective when flying too frequently. When it comes to visual fidelity, this iteration hews far closer to the PlayStation 4/Xbox One/PC remake than the original. Sure, there are graphical compromises and load times are sluggish, but Black Forest’s port is largely commendable. Despite a few sputters when the action heats up, but largely the game’s framerate is surprisingly smooth, keeping Crypto 137 feeling responsive. 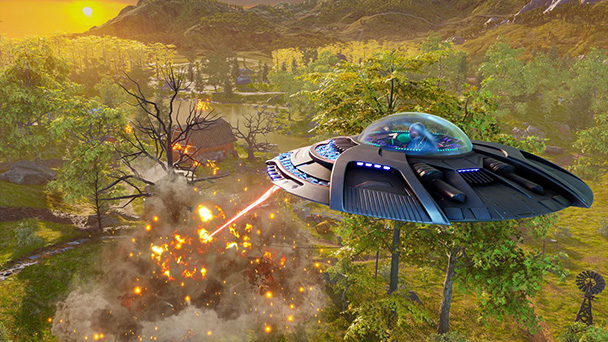 Inevitably, some picky players will ask if Destroy All Humans! needed a remake. Spend a few minutes with Black Forest Game’s adept remake and the answer is a clear and resounding, “yes”. While there is a wide selection of sandbox titles, few provide such a spirited outlet for intergalactic vandalism. Being a bad guy in Destroy All Humans! presents a plethora of ways to be malicious- and most of them feel utterly satisfying. Hopefully, this isn’t the last Pandemic Studios’ sandbox we’ll revisit. Returning to Mercenaries and The Saboteur would be magnificent.

Destroy All Humans! was played on Switch with review code provided by the publisher.

Destroy All Humans! (Switch) review
The remake of Destroy All Humans! reminds us that being the bad guy can be a lot of fun, especially when protagonist Crypto 137 can fling people across hillsides. Pleasingly, most of the fluidity of ragdoll tosses and open-world antics have been preserved in Black Forest Games&rsquo; Switch port. Currently, sandbox-based franchises are abundant, with&hellip;

Summary : Sure, there are a few jokes and mechanical elements that feel creaky sixteen years later. But the re-release of Destroy All Humans! demonstrates that developer Pandemic Studios were one of the masters of the sandbox, which is evident throughout this proficient Switch port.