Bubsy: The Woolies Strike Back review 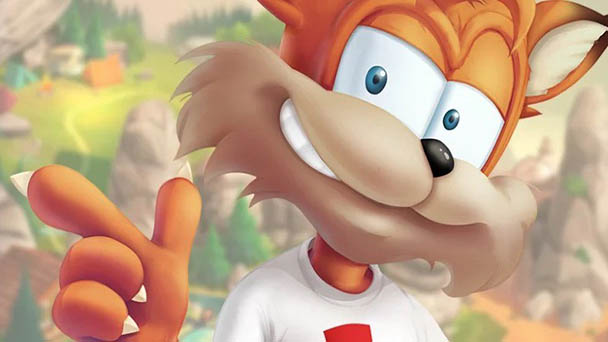 The ‘90s had a number of platform-game based luminaries like Mario, Sonic, and Crash Bandicoot. Unsurprisingly, their popularity inspired a surplus of second-rate copycats, with characters like Alfred Chicken, Zool, and Plok seemingly abandoned by the end of the twentieth century. After a pair of middling two-dimensional titles and an abysmal three-dimensional outing, Bubsy fell into the latter camp, with the property mostly dormant for the better part of two decades.

Yet, courtesy of a resurrected Accolade label and the coding of Black Forest Games (Giana Sisters: Twisted Dreams), the bobcat is back, with the release of Bubsy: The Woolies Strike Back arriving on PC and PlayStation 4. Sadly, this attempt at a comeback feels like the attractive but only moderately talented member of a boy band desperately struggling to make a mid-life comeback. Largely, it’s an embarrassment for everyone involved. 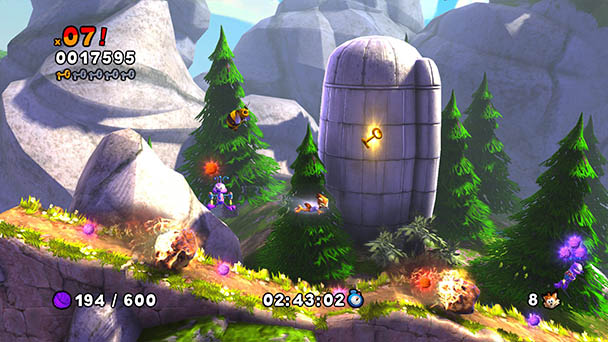 First, the good news: The Woolies Strike Back doesn’t try to shoehorn in any long-winded plotline to keep up with modern convention. Instead, a ten-second intro explains the context, with the woolies stealing Bubsy’s beloved Golden Fleece, plunging the bobcat into action, as he attempts to recover the gilded yarn ball. Subsequently, players are ushered into a tutorial level which demonstrates Bubsy’s moveset.

Unsurprisingly, the character retains his innate abilities. Like a wild lynx, he can fall great distances without incurring harm, as long as he doesn’t land in water. And his glide is intact, with players able to trigger a double jump than provides both a bit of elevation as well as the ability to float across wide gaps. Regrettably, these are mapped to two different buttons, making double jumps feel awkward. Expect to spend a few hours with Bubsy before you are able to maneuver the bobcat across elevated platforms without uneasiness. 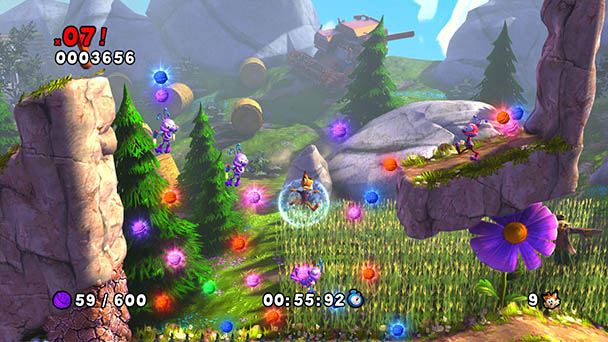 The Bobcat’s new move is a pounce, that aims to have several uses. From the ground, the maneuver allows Bubsy to clear large distances, clearing wide chasms rather easily. Along with a traditional leap onto the heads of threats, the pounce can also be used to take out enemies, as well as crash through rock walls. But all too often, the arc of your leap sends the protagonist sailing right over the head of foes. Occasionally, you can take aim at an opponent on the other side of the screen and tap the pounce button to ricochet into other nearby foes. But frequently, the move will send you careening around wildly. Given the game’s inelegant collision detection, colliding with a foe frequently uses one of Bubsy’s nine lives, explaining the liberal scattering of 1ups across my playfields. Ideally, the pounce button would have behaved like modern Sonic games, automatically locking onto, before homing in on the next adjacent enemy.

Eventually, you’ll come to terms with The Woolies Strike Back, leaping across the game’s eleven platforming stages with a watchfulness that saps most of the fun from the platforming. Undoubtedly, you’ll need to master maneuvering if you have any ambition of assembling the five keys that open a yarn locker at the end of the level. But that’s not the only type of collection extended here. Each stage has hundreds of yarn balls that require gathering. 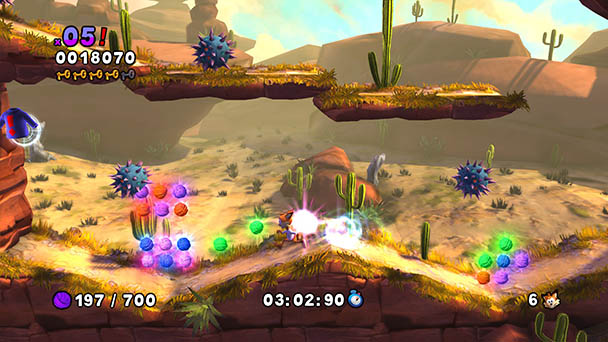 If the game’s levels were entertainingly designed, this Sisyphean task might be appealing. But woefully, there’s little imagination or diversity here, with Bubsy largely moving through a succession of stages which vary mostly in appearance. Yes, there’s the occasional flaming boulder that recalls Donkey Kong, but far too often The Woolies Strike Back displays less ingenuity than the average user-made level from LittleBigPlanet. Woefully, the game’s trio of boss battles are only a little better, tasking Bubsy with taking on UFOs. While these showdowns traditionally require players to predict patterns, all too often the routines change without warning, single-shotting our fragile bobcat.

On three Nvidia-powered rigs, Bubsy: The Woolies Strike Back ran flawlessly on one of them. The other two consistently crashed after loading a level. While that level of performance it’s disheartening, it seems quite likely that Black Forest Games will patch the game. Save for this major issue, the game otherwise ran smoothly, exhibiting a sixty frame-per-second delivery on even a modest machine. While the game’s visuals are respectable, the soundtrack doesn’t fare as well, offering up generic synth-heavy strains that will disappoint even the most diehard bobcat enthusiast. Sonically, the sole upside is a sliding meter which permits players to adjust the frequency of voiced quips. 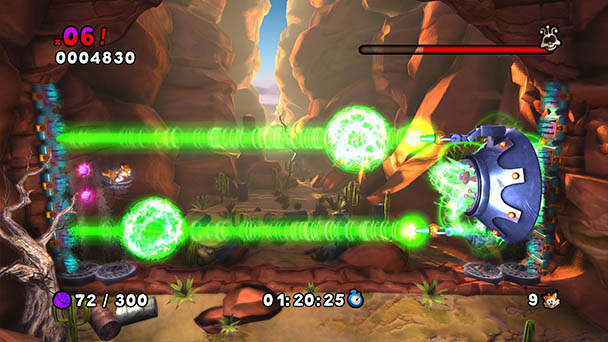 Bubsy: The Woolies Strike Back’s final transgression is a thirty-dollar MSRP. With a paltry fourteen stages that can be completed in a few hours, there’s just not enough content to justify the asking price. Factor in the game’s only passable play, and Bubsy is better left as a bargain proposition.

Bubsy: The Woolies Strike Back was played on the
PC with review code provided by the publisher.

Bubsy: The Woolies Strike Back
Platform:
PC, PlayStation 4
Developer: Black Forest games
Publisher: Accolade
Release date: October 31st, 2017
Price: $29.99 via Steam, currently on sale for $19.74
Difficulty: Easy to moderate
Bubsy: The Woolies Strike Back review
The &lsquo;90s had a number of platform-game based luminaries like Mario, Sonic, and Crash Bandicoot. Unsurprisingly, their popularity inspired a surplus of second-rate copycats, with characters like Alfred Chicken, Zool, and Plok seemingly abandoned by the end of the twentieth century. After a pair of middling two-dimensional titles and an abysmal three-dimensional outing, Bubsy fell into the latter camp, with the property mostly dormant for the better part of two decades. Yet, courtesy of a resurrected Accolade label and the coding of Black Forest Games (Giana Sisters: Twisted Dreams), the bobcat is back, with the release of Bubsy: The Woolies&hellip;

Summary : Platformers need interesting level designs and some type of stimulation to goad gamers into gathering a multitude of collectables. Bubsy: The Woolies Strike Back misses on both counts, leading to an experience poised to produce disappointment, even in the most fervent fans of character-driven platformers.