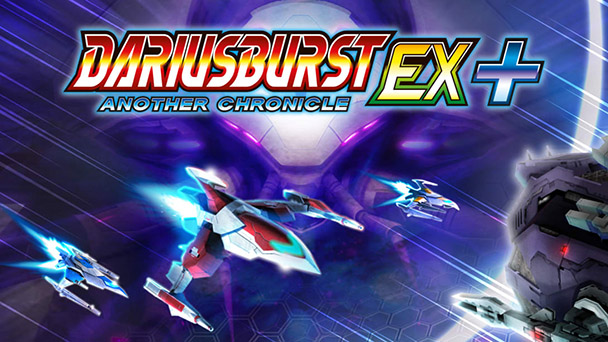 Dariusburst: Another Chronicle EX will have you shooting bio-mechanical fish for weeks if you let it, thanks to Chronicles mode. It’s a rather robust package, even if the source material is a single coin-operated title. 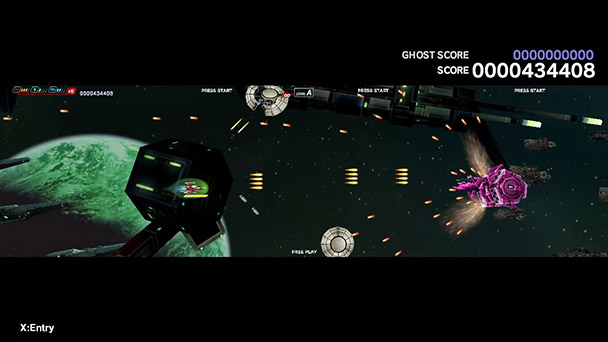 During the late eighties, there was a growing concern that home consoles would start ebbing away at the popularity of arcades. The editor of Beep, one of Japan’s leading magazines wrote at the time, “to survive, arcade games must be different from home games. Developers must continue to create new hardware, which will expand the possibilities of games.” The result was a wave of taikan coin-ops. 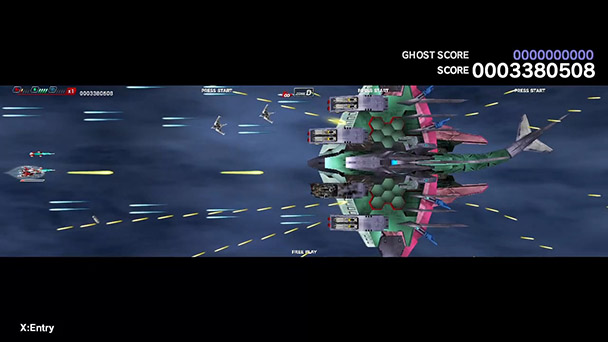 A Subaquatic Journey for the Senses

Engineering creativity might have reached a climax with 1987’s Darius. Using a trio of thirteen-inch monitors, the games used mirrors to render an unprecedently long playfield, as two players shot their way through schools of wonderfully eccentric mechanical fish. The playfield, which mimicked the panoramic perspective of the human eyes, was stunning. More importantly, it provided players plenty of time to react to the enemies that would dance and dart about.

The game’s aural output was every bit as astounding. Speakers were positioned underneath the player bench. Offering what developer Taito referred to as “Body Sonic”, they reverberated in time with the music. In execution, the warning of an imminent boss battle could be felt in your legs, inspiring a sense of dread. Hisayoshi Ogura’s pulsating soundtrack, with veered into experimental territory, could be enjoyed by plugging in your own headphones. Players could even adjust the left and right balance. Plugging in your Walkman headphones into the cabinet and preparing to be immersed in sight and sound must have felt like a trip into the future. 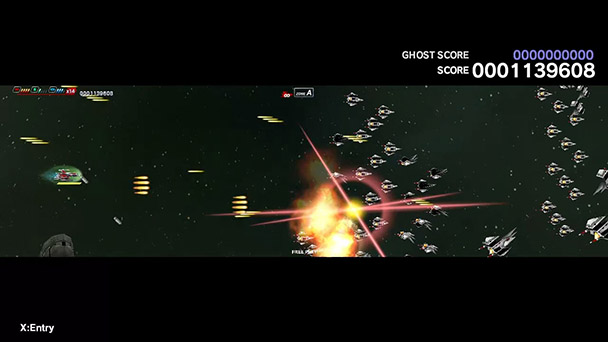 Yes, A Bit of Game History

Of course, home consoles and portables inevitably prevailed, and one result was the Japan-only release of Dariusburst for the Sony PSP in 20091. Remarkably, the game was successful enough to spawn an arcade iteration the following year, which arrived in the form of another taikan cabinet. Boasting a pair of thirty-two-inch LCD screens and angled mirrors to provide the illusion of an elongated playfield, Darius Burst: Another Chronicle seized the attention of arcade-goers.

It also added a number of changes, permitting simultaneous play for up to four players and power-up sharing that increased the feeling of collaboration. Body Sonic as well as a headphone port all made an appearance, with Taito hoping that the title might get 30- to 40-year-old males back in arcades. Luckily, you don’t have to be a part of that demographic to enjoy the core game as well as its variations, which are included in Dariusburst: Another Chronicle EX. 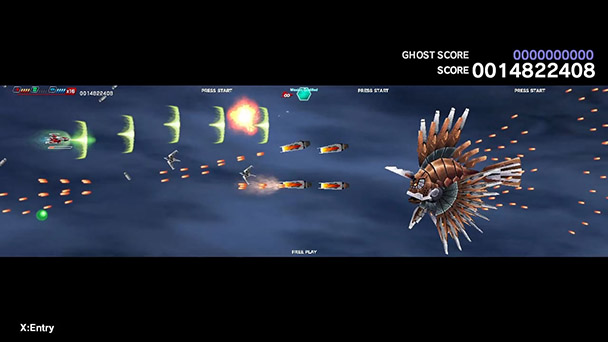 Months-worth of Play for Darius Fanatics

Delve into the physical edition or the 2.2GB download, and you’ll be presented with four ways to enjoy the game, offering Original, Original EX, Chronicle, and Event mode. Original, apes the experience of playing the arcade original. Sure, you’ll forgo the dual monitor set-up and Body Sonic is reduced to HD rumble, but you’ll have to the ability to tackle the title on three difficulty settings (via the traditional ‘tree branch’ pathing) or play with an infinite number of ships. While having unlimited lives might seem like cheating, the option can help you get acquainted with Another Chronicle EX’s prickly stages.

Even if you’re a STG veteran, Dariusburst can chew you up and spit you out. You have the advantage of an ultra-wide 32:9 screen ratio, permitting plenty of visibility across the horizontally-scrolling spacescapes. But with only a single still image as tutorial and enemies that habitually buzz around the screen, acclimation will take time. Dariusburst’s robo-aquatic enemies often move in capricious, animalistic patterns. Confronting a serpentine-like creature in an early stage might make you hesitant to draw too close to enemies. But your main gun fires much quicker against adjacent targets, providing an intriguing balance between risk and reward. 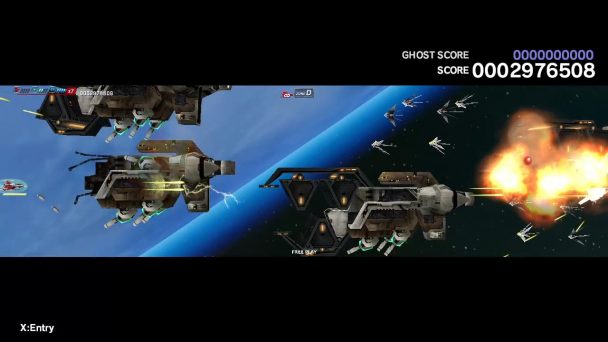 Is This Series ‘Canon’?

Learning how to properly use your ships F-Burst Cannon is a key contributor to success. A button press can send out a sizzling blue beam capable of carving a pathway for you. Alternatively, a double tap allows you to drop the weapon in place and even rotate it your maximum effectiveness. What’s rewarding about the second method is that every eliminated enemy feeds back into its power gauge. Deploy it at the proper time and you can keep your cannon operational for quite a few seconds. Even if you trigger it at an inopportune time, you can recharge your meter by gunning down foes.

Power-ups are color-coded, with red increasing the dominance of your firepower. Green augments your bombs, gold acts like a smart bomb, and silver provides additional points. Blue power-ups are crucial, as they improve your shielding. Pleasing, deaths aren’t always caused by single-hits; you have a defensive meter positioned right below your ship that gradually refills over time. When playing with up to three others, collecting a power-up sends out a temporary wave and other players able to enter the area automatically receive the same dividends. 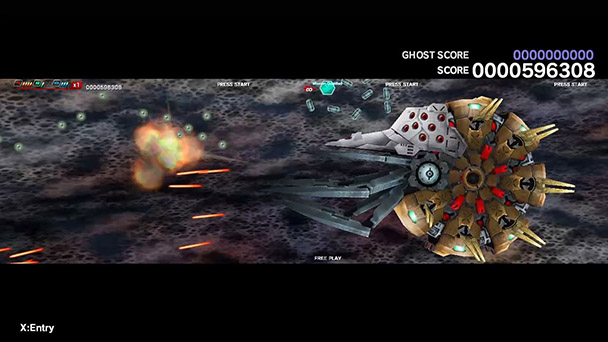 Original EX cranks up the difficulty and adds additional endings to the ones found in Original Mode. But Chronicle mode is undoubtedly the deepest component of the package. Here, you’ll navigate a galactic map, taking on thousands of remixed missions, each varied through restrictions and variations. Chronicles doesn’t radically change the core Dariusburst experience, but instead of memorizing your way through a level, you be forced to rely on your shooting skillset. Finally, Event Mode offers the limited timed events found in the original arcade version, along with eight new alternatives.

Given the multitude of modes, there’s a lot of ways to enjoy Dariusburst: Another Chronicle EX. But unlike the previous compilations which assembled entries from Darius’ console and arcade outings, Another Chronicle EX offers deviations from a single game. For diehard fighters of the Belsar forces, it’s a worthwhile package, but shooter fans who favor diversity might be better off with one of the other developer-centered packages, such as Psikyo Shooting Stars Alpha and Bravo or even the tritely titled, Shmup Collection, which bundles Astro Port’s titles.

Dariusburst: Another Chronicle EX was played
on Switch with review code provided by the publisher.

1 Before making a pilgrimage to Super Potato, know that 2015’s Darius Burst: Chronicle Saviours offers an enhanced version of Dariusburst and is available for PlayStation 4, PS Vita, and PC.

Dariusburst: Another Chronicle EX review
Dariusburst: Another Chronicle EX will have you shooting bio-mechanical fish for weeks if you let it, thanks to Chronicles mode. It&rsquo;s a rather robust package, even if the source material is a single coin-operated title. During the late eighties, there was a growing concern that home consoles would start ebbing away at the popularity of arcades. The editor of&nbsp;Beep, one of Japan&rsquo;s leading magazines wrote at the time,&hellip;

Summary : Geared mainly toward Darius diehards, Dariusburst: Another Chronicle EX offers a multitude of deviations from the 2010 arcade game. Given the price tag and the concentration, it might be best suited for collectors.