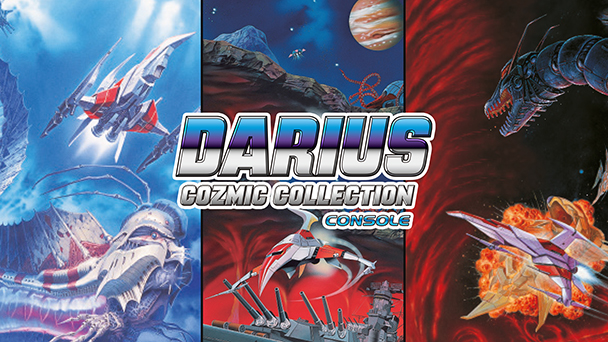 Collectors might call them rarities, less fervent fans might call them filler, but there’s a bit of redundancy and at least one series omission in Taito’s latest compilation. But that shouldn’t stop shooter supporters from this considering this assembly of Darius console ports and originals.

There’s a bit of gaming history inside Taito’s Darius franchise. Originally, the 1986 coin-op was created to deliver a sense of spectacle that home consoles couldn’t compete with. Designers Junji Yarita and Akira Fujita created a cabinet that housed three 13-inch CRT monitors. Using mirrors, Darius provided the illusion of playing a shooter on a single, massively wide screen. Meanwhile, the ‘body sonic’ sound system pumped out formidable reverberations that signaled a boss battle.

But over time, arcades steadily lost their foothold. During this period, Darius moved its mechanical fish out of public places and shifted its foes into a succession of console adaptations. You’ll often hear about these types of reworkings as ‘ports’, often uttered with more than a hint of disdain. Naturally, the transition between high-priced dedicated hardware and a modestly priced home system meant that sacrifices were required. But looking back many of these adaptations were surprisingly adept. They might not have pixel perfect, but artistry was evident in capturing the spirit of the source material. 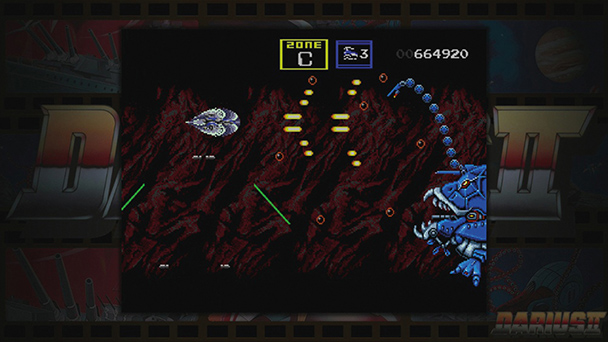 Dive into Darius Cozmic Collection Console’s assemblage of four main games and two rarities and you might reconsider any contempt for nineties-era console ports. Darius II makes an ideal place to start, with Natsume’s 1990 Mega Drive adaptation offer a respectable reworking of the original coin-op. You’ll notice that an option for two-player simultaneous play is missing. Presumably, another on-screen ship and its offensive weaponry might have been two much for the Mega Drive’s single Motorola 68000 CPU. The original arcade hardware used two of the chips. Another sacrifice is the original game’s madcap voice acting, which offered statements like, “I always wanted a thing called tuna sashimi”.

To help compensate for the lack of co-operative play, Darius II added a few extras. Instead of just a generic pilot steering the franchise’s signature ship, the Silver Hawk, you’ll also have access to Proco Jr. and Tiat Young in the game’s menus. While the former plays normally, the latter starts you off with a small boost to each of your main guns, bombs, and shielding. As with many old games, codes can be entered on the title screen for options like a level select, invincibility, or even a harder game. 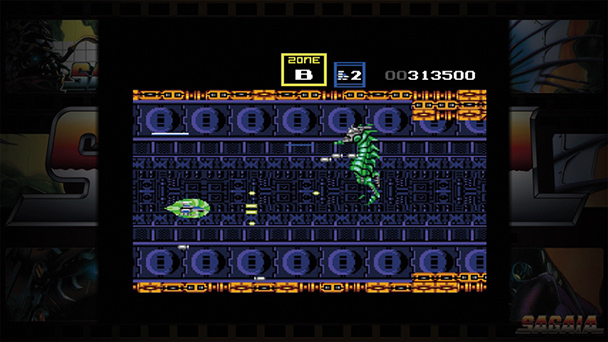 In territories like the United States and Brazil, Darius II was renamed Sagaia. During the localization process, Japanese text was removed, as well as the game’s invincibility code. Otherwise, it’s nearly identical. But the Sega Master System version, which is included here, is for die-hard collectors only. The system’s modest, eight-bit Zilog Z80A CPU obviously struggles with Sagaia. Delve into the game, and you’ll witness a lot of sprite flicker and a chiptune soundtrack that strains to reproduce Hisayoshi Ogura’s soundtrack. It’s an interesting curio, but you’ll probably stick with the Mega Drive/Genesis versions. 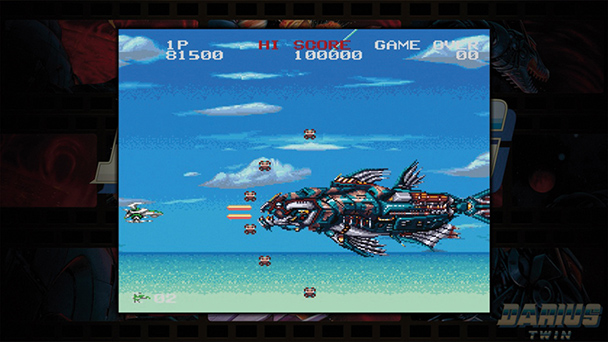 In Japan, Darius Twin debuted alongside the release of the Super Famicom, flaunting some of the console’s superiority over it’s rival, the Mega Drive. As the title implies, Twin revisits the franchise’s cooperative action. Two players can take on schools of robofish with little impact on performance. But the game’s true distinction is found in its musical score, which gives Sony’s S-SMP a vigorous workout. Darius Cozmic Collection Console includes both the Super Famicom and SNES iterations, with the latter offering true stereophonic output, giving it a slight edge.

Released in Japan and North America two years later, Darius Force feels like a lateral shift rather than a solid advancement. At the beginning in the game, players can select from three different Silver Hawks, with color coding representing abilities from the original Darius, Darius II, and a new craft. But that’s not the only change to your offensive approach. If you opt to auto-fire with both guns and bombs, Force drops the weapon strength of each one notch. While that system might have its admirers, few will find that Kiyoshi Kusatsu and Yoshio Watanabe’s soundtrack outshines the sonic quality of Darius Twin. The inclusion of Super Nova on the anthology represents the North American version of Darius Force, where bosses have been renamed. 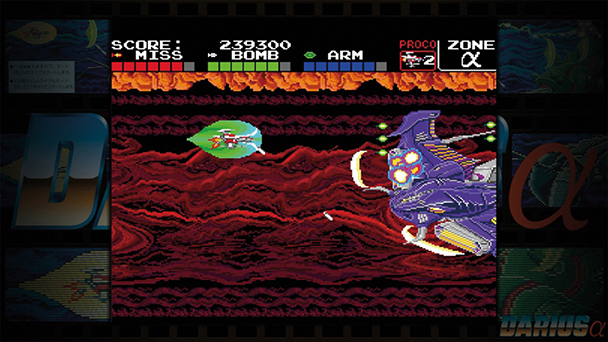 Round out the collection are two PC Engine entries, Darius Alpha and Darius Plus. The first is an exceeding rare promotional title that was made available via mail order. It’s essentially a boss rush, where players can try to tackle all 16 elevated foes, or with a press of the select button on the title screen attempt to see how much mechanical marine life that can defeat in four minutes.

1990 Darius Plus is an abridged version of Super Darius, with cuts to ensure the game fit on a HuCard. It’s a proficient port of the original game, that somehow manages to condense the triple-screen action to a single 4:3 playfield. But with a Redbook soundtrack and a full roster of 26 bosses Super Darius is the definitive version of the game but woefully is missing from this collection. However, the title can be found on the TurboGrafx-16 Mini/PC Engine Mini. 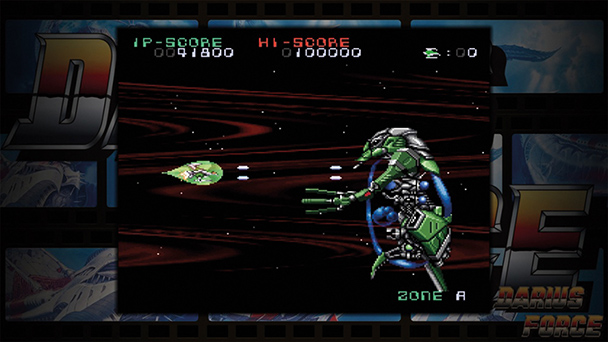 Despite some questionable inclusions for the compilation, there’s little room for complaint when it comes to emulation. Here, M2 delivers their dependably proficiency, mirroring ever sprite flicker and pitch bend with meticulous accuracy. Pleasingly, there are a few options not found in the original release, with Darius II extending a score-based challenge, and every game offering the ability to view and download replays. That said, a rewind ability would be exceedingly welcome.

Save for the omission of Super Darius, Darius Cozmic Collection Console does a commendable job at chronicling the history of the shooters console entries. Taito’s legacy might have faded during the early years of the new millennium. But with this compendium as well as the Arcade collection, the former vodka manufacturer is on the way to reviving its reign.

Darius Cozmic Collection Console was played on
Switch with review code provided by the publisher.

Darius Cozmic Collection Console review
Collectors might call them rarities, less fervent fans might call them filler, but there&rsquo;s a bit of redundancy and at least one series omission in Taito&rsquo;s latest compilation. But that shouldn&rsquo;t stop shooter supporters from this considering this assembly of Darius console ports and originals. &nbsp; There&rsquo;s a bit of gaming history inside Taito&rsquo;s Darius franchise. Originally, the 1986 coin-op was created to deliver a sense of spectacle&hellip;