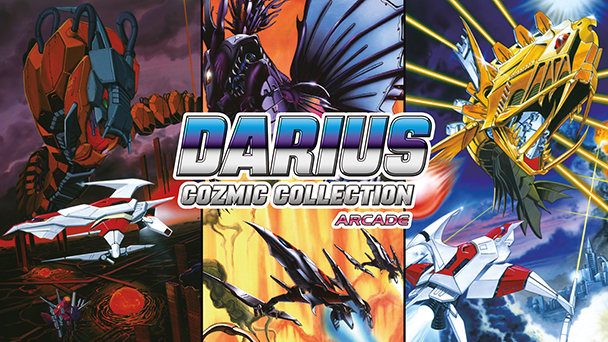 Exterminate schools of antagonist mechanical marine life across a compilation of Darius’ arcade offerings. There’s a notable omission, but that’s not enough to prohibit enjoyment from Taito’s classic shooters.

During the late eighties, there was a growing concern that home consoles would start ebbing away at the popularity of arcades. The editor of Beep, One of Japan’s leading magazines wrote at the time, “to survive, arcade games must be different from home games. Developers must continue to create new hardware, which will expand the possibilities of games.” The result was a wave of taikan coin-ops. 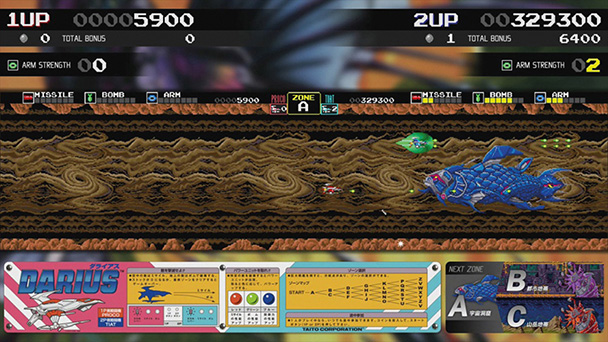 A Subaquatic Journey for the Senses

Engineering creativity might have reached a climax with 1987’s Darius. Using a trio of thirteen-inch monitors, the games used mirrors to render an unprecedently long playfield, as two players shot their way through schools of wonderfully eccentric mechanical fish. The playfield, which mimicked the panoramic perspective of the human eyes, was stunning. More importantly, it provided players plenty of time to react to the enemies that would dance and dart about.

The game’s aural output was every bit as astounding. Speakers were positioned underneath the player bench. Offering what developer Taito referred to as “body sonic”, they reverberated in time with the music. In execution, the warning of an imminent boss battle could be felt in your legs, inspiring a sense of dread. Hisayoshi Ogura’s pulsating soundtrack, with veered into experimental territory, could be enjoyed by plugging in your own headphones. Players would even adjust the left and right balance. Plugging in your Walkman headphones into the cabinet and preparing to be immersed in sight and sound must have felt like a trip into the future. 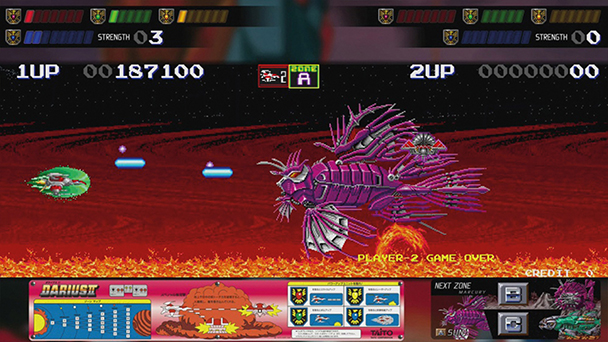 Exactitude if Your Can Endure Tiny Sprites

For years, Darius’ innovations inhibited any kind of home adaptation that would do the innovative shooter justice. But the Darius Cozmic Collection Arcade brings us within whispering distance. Thanks to M2’s consistently masterful coding, we’re able to get pretty close to the sensation of being in a Tokyo arcade circa 1987, playing a coin-op fresh off the assembly line, before age would disrupt the illusion of Darius’ three-screen layout.

In its default, precise pixel-ratio default mode, Darius still thwarts home consoles. The elongated playfield becomes a narrow ribbon on your Switch screen or even on a television, making the avoidance of projectiles and enemies a bit difficult. But head to the menu, and select the “fit to screen” option, and you’ll be privy to a pretty truthful recreation. There’s also a fullscreen option that doesn’t squander any screen estate, but you’ll have to deal with unsightly squatty sprites. 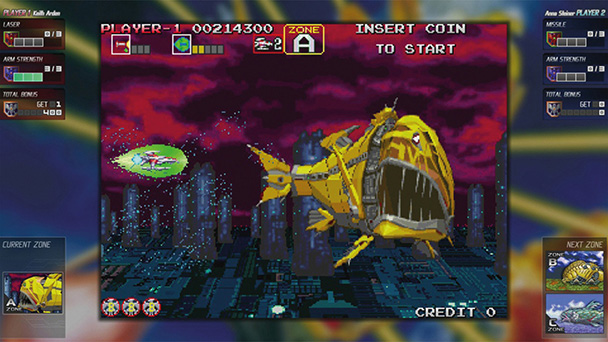 Soaring with the Silver Hawk

Pleasingly, the original Darius remains an engaging horizontally scrolling shooter. Rather than merely flying the Sliver Hawk defensively and evading the formations of foes and their bullets, you are roused toward assault. Prioritizing and eliminating enemies is the only way to keep the playfield from devolving into chaos. Enemies that carry power-ups are color-coded with red, green, and blue orbs augmenting your main guns, bombs, and shielding, respectively. But unlike many shooters where power-up linger on screen for extending periods, Darius forces you into gathering them before they disappear. While each one boosts your abilities a minimal amount, losing your progress feel fittingly upsetting. And then, there’s the Zone Map, which offers a branching route much like OutRun, contributing replayability.

Optionally, the Switch’s HD rumble emulates the sensation of ‘body sonic’ with a generous amount of haptic feedback. In execution, it doesn’t convey the body-rumbling foreboding of the original but it’s a respectable effort. On the downside, it tends to eat up battery life, and occasionally the throb of boss fights can induce a bit of numbness in fingertips. While the Switch doesn’t have any way to balance stereophonic volume levels, plugging in a set of headphones is still the best way to play Ogura’s sonic brilliance. 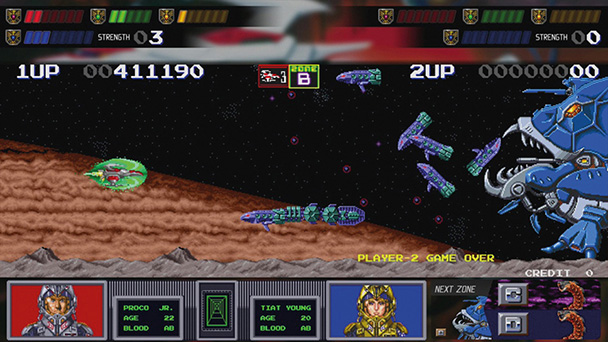 Subtle Distinctions Found in Iterations and the Sequel

Beyond the original Darius, Cozmic Collection Arcade provides players with six other selections. Some offers minor iteration, like the New and Extra versions which tweak your weaponry to rebalance difficulty. For the latter, the early game is easier but as you persevere, the challenge level escalates, hoping in conjunction with the level of improvement your power-ups add. If you do find yourself outmatched, the collection offers a training mode, where you can set your weapons levels before plan. While neither the New or Extra versions are comprehensive revision, retro enthusiasts will certainly appreciate the inclusions of these two variants.

1989’s Darius II, is also included in the collection. Wisely, the sequel doesn’t try to radically change formula, opting instead to make some restrained alterations. The original coin-op arrived in both the same three-screen as well as a dual-screen set-up, the latter of which appears here. With the Cozmic Collection, you’ll also find Sagaia Versions 1 and 2, which are variation of Darius II for the international market. Venture into these and you’ll find abridged adaptations, that shorten stages while increasing the difficulty.

Whichever iteration you tackle, you’ll notice elements like larger sprites, weapon system where upgrades are provided after defeating an entire squadron (ala Gradius), and boss battles that will change the direction of the Silver Hawk. Shooter fans will also notice a few homages, with a fiery level that seems to reference Gradius II, and mid-bosses that make a reappearance from the original game. Likely, you’ll enjoy the creativity of some of the big bosses, such as the giant hermit crab that is using the hull of the Yamato as a shell. 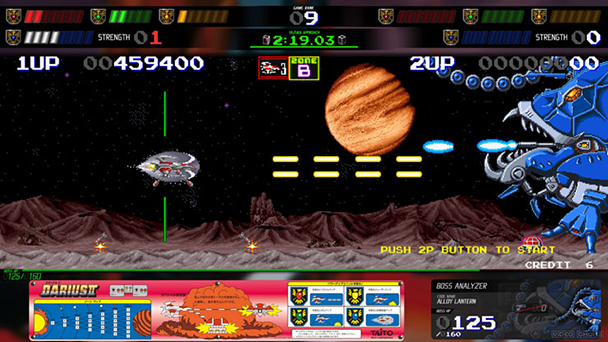 A Side-Story as Good as the Main Game

The inclusion of 1994’s Darius Gaiden endows the Darius Cozmic Collection Arcade with a bit more variety. The single-screen title forgoes the allure of multiple CRT displays, extending the allure of a well-made horizontally-scrolling STG. Sure, the robo-fish and zone maps are still here, but now there’s the ability to capture a mid-boss, effectively transforming it into an option, and using this power against your opponents. Gaiden is hard but rarely unfair, and an imperative part of the franchise’s development, making its inclusion here essential.

Inexplicably missing from the collection is G-Darius (1997), which used polygons to render its mechanical marine life. Typically, late nineties STGs that moved away from sprites felt loose, lacking the strict hit detection found in bit-mapped efforts. But G-Darius demonstrated shooters could endure the industry’s passion for polygons. Much of the game’s strength was rooted in the introduction of Capture Balls, which built on Gaiden’s mechanics. This time, any enemy could be converted into a turncoat who assisting you in battle. The absence of G-Darius is notable and is one of the two significant flaws in an otherwise adept assemblage of Taito’s winning coin-op shooters. The only other blemish is a price point that feels a hit too high. Yes, this is a commendable collection that’s proficiently ported, but also one’s that carries a premium price tag.

Darius Cozmic Collection Arcade was played on
Switch with review code provided by the publisher.

Darius Cozmic Collection Arcade review
Exterminate schools of antagonist mechanical marine life across a compilation of Darius&rsquo; arcade offerings. There&rsquo;s a notable omission, but that&rsquo;s not enough to prohibit enjoyment from Taito&rsquo;s classic shooters. During the late eighties, there was a growing concern that home consoles would start ebbing away at the popularity of arcades. The editor of Beep, One of Japan&rsquo;s leading magazines wrote at the time, &ldquo;to survive, arcade games must&hellip;

Summary : The Switch’s comprehensive shooter library gets another winning addition with anthology of Taito’s Darius Arcade games. But for the price, G-Darius should have been bundled in.