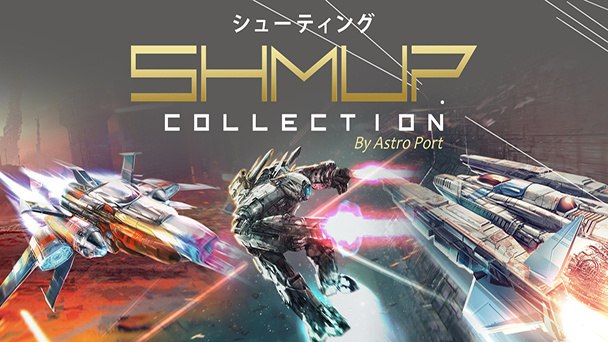 The Shmup Collection brings together a trio of Astro Port’s efforts that each offer lightly familiar, foe-exterminating fun. Genre fans will appreciate everything that the lack of supplementals.

Since its release three years ago, the Switch has become an exceptionally practical piece of hardware. Sure, it might lack the raw computational power of the PlayStation 4, Xbox One, or a PC. But the system has demonstrated the ability to proficiently run ports of previous generation titles. Whether it’s games like Red Faction: Guerilla, Darksiders II, or Zombie Army Trilogy, Nintendo’s system permits players to enjoy each of these games in portable form. There’s something quite gratifying about enjoying a game in a patio chair, without any requirement for an adjacent AC outlet.

With the release of The Shmup Collection, players can now appreciate a trio of Astro Port’s shooters without the need to lug a five-pound laptop around. Although each of the three included titles might not be household names, Armed Seven DX, Satazius NEXT, and Wolflame are enjoyable efforts. Each draws inspiration from some of the genre’s best efforts, while injecting their own individual features. Available individually from the eShop, STG fans can save a few dollars by purchasing the bundle. So, let’s take a look at each title: 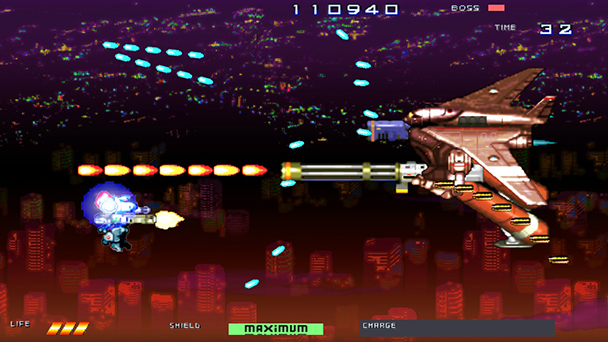 Back in 1989, the Earth was attacked by the Gogoh Army. We emerged victorious, repelling the invasion, and using alien technology to advance our own expertise. With a common enemy, international conflict hit an all-time low, leading to the formation of a unified Earth Federation. But we all know a precarious sense of peace often precedes wanton violence.

In Armed Seven’s case, hostility stems from the Neo Roland Order, a shadowy group opposed to the ideals of the Earth Federation. What this means is that you’ll hop into a massive mech, outfitted with three different types of weapon systems, in an effort to quell this emerging uprising. 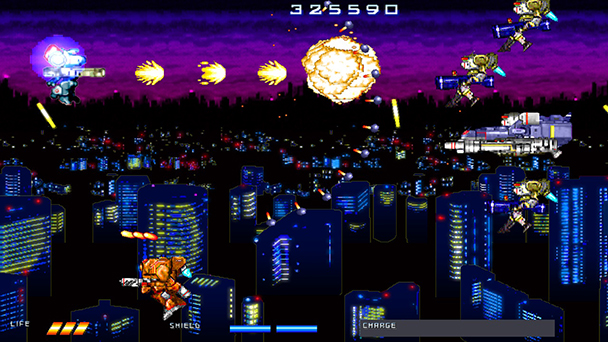 Seven stages of side-scrolling action stand between you and victory, with each level containing a mid- and final boss. Beyond the four different weapons available for each of your three guns, you’ll occasionally uncover power-ups and shielding power-ups by destroying certain enemies. The hook is that your primary weapon systems can be aimed, directing your output in three different directions. While either left or right stick can be used to for aiming, neither are ideal in the heat of battle. Another blemish is that a band of the playfield in obscured by the scoring overlay. While you can usually just avoid this zone, it can make hitting ground-based, projectile-laughing enemies quite challenging in the fourth level.

You’re also privy to a charged weapon, that gradually regenerates over time. These summon short-lived but exceedingly powerful attacks, offering abilities like giant laser beams or volleys of missiles. Although the game is a rather short affair and can be completed in about 20 minutes, learning to prioritize different enemies will undoudtedly take more than a few attempts. This Switch iteration also extends the original Armed Seven, with visuals that aren’t quite as polished as its successor. But either way, it’s hard not to love the game’s beefy PC Engine/TurboGrafx 16-style sprite designs. 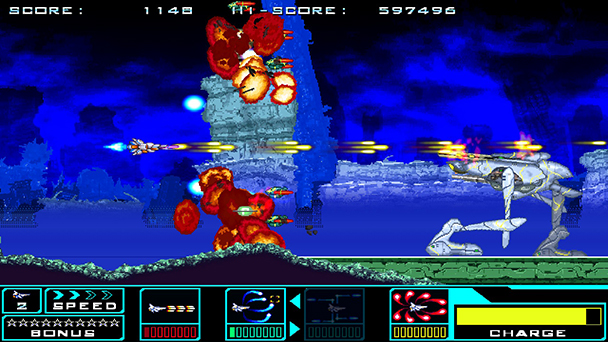 While Armed Seven borrows gentle inspiration from the Assault Suit series, Satazius NEXT is much more obvious in its tribute. Head to the loadout screen and you’ll spy a ship that looks suspiciously like the Vic Viper, while different weapons systems are a more direct reference to Gradius III. Head into the first of the game’s six stages, you’ll discover that your offensive toolset grows much quicker than Konami’s series, and successions of power-ups found on the air and ground. Your ship is a bit more maneuverable, as well. Yes, there are different speeds, but you’re much more likely to find a medium before feebly sluggish and so fast that it’s easy to crash into a canyon wall. As such it’s much easier to graze the ground, eliminating a chain of enemies or pick up a low-flung power-up.

The larger divergence appears at the end of the first stage. Here, the boss emerges from the left side of the screen, chasing you through a number of branching paths before confronting you head-on. Instead of the typically exchange of fire, you must elude the foe, conveying a sense of vulnerability that is rather rare in STGs. While latter bosses exhibit more traditional forms of aggression, Satazius’ level of adversity doesn’t let up. Across asteroid fields and through bases brimming with hostiles, the game is quite difficult. 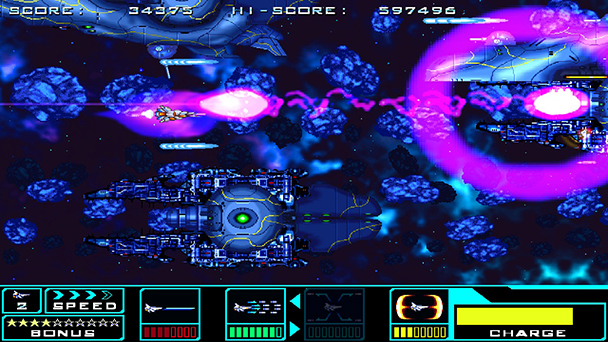 For battle-hardened shooter enthusiasts, that will be a blessing. Like Super Hydorah, this is an unrelenting test of stage memorization and razor-sharp reflexes. However, even on the lowest of four difficulty levels, the game might be a bit too punishing for those who honed their projectile-evading chops.

Let’s toss objectivity aside for a minute and talk about why Wolflame is my favorite title in the bundle. As a vertical shooter with mechanized enemies like tanks with independent turrets and futuristic flying foes, there’s an undeniable Raiden-esque vibe. Like the Seibu Kaihatsu classic, defeated adversaries occasionally drop power-ups that cycle in color. But here, these enhance the two options that can flank your ship. 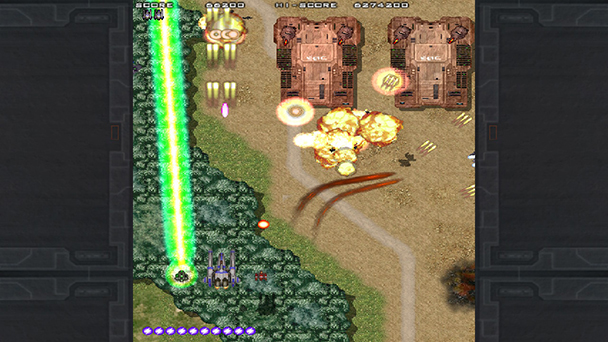 Each hue represents a certain type of secondary arm. Green provides a pulsing laser that can either deliver a concentrated blast at a formable foe or be used to sweep the screen free of subordinates. Red sends out a spread shot that augments your main cannons as well as adds a few homing missile. Blue pick-ups contribute lock-on beams that can sizzle multiple enemies. Picking up additional power-ups of the same color increases the power of your options, up to five levels of enhancement.

Like many shmups, death is punishing, confiscating your developments, quickly eradicating any sense of superiority. But Wolflame isn’t overly punitive, putting a ship on-screen that when eliminated, releases a cross-shaped power-up that returns your entire weapon set, save for any banked bombs. 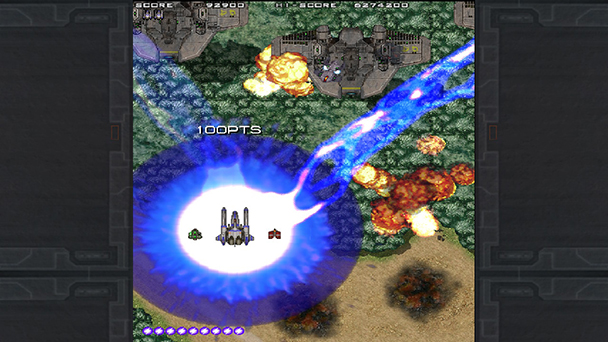 While the sound mixing favors music over the glory of detonations, few criticisms can be said about the game’s visual delivery. Player ships and enemy tanks, boats, and aircraft are rendered in muted tones, while projectiles are cast in bright colors, making the opposition easy to read. Explosions are especially nice looking, with blasts sending out a wealth of sprites; destroy a bunker and the screen with fill with fire. The sole contentious design decision is the speed of enemy projectiles in the latter levels. Intermittently, you’ll get picked off by an opponent just off the edge of the screen, with scant time to react.

Beyond the end credits in each game, the package offers little insight in the production of these three titles. Beyond Astro Port being a three-person doujin, little information can be found online. As such, The Shmup Collection neglects the omake (extras or bonus material) that intermittently elevate these bundles. Although publisher Storybird likely wanted parity between this collection and purchasing all three titles individually, a link to a website (similarly to that’s some with the SEGA Ages collections) would have been beneficial. This is an affordable and skillful compilation of shooters, and the developers definitely deserve the recognition.

The Shmup Collection review
The Shmup Collection brings together a trio of Astro Port&rsquo;s efforts that each offer lightly familiar, foe-exterminating fun. Genre fans will appreciate everything that the lack of supplementals. &nbsp; Since its release three years ago, the Switch has become an exceptionally practical piece of hardware. Sure, it might lack the raw computational power of the PlayStation 4, Xbox One, or a PC. But the system has demonstrated the ability to proficiently run ports of&hellip;

Summary : Bringing together Armed Seven DX, Satazius NEXT, and Wolflame, The Shmup Collection is a practically priced gathering of three superior shooters. While none are groundbreaking and err on the sire of brevity, each entry is strong enough to support multiple playthroughs. 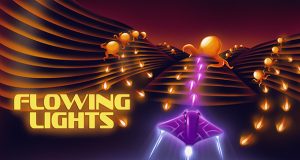 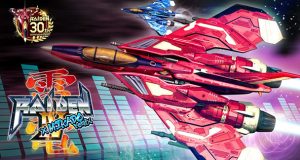 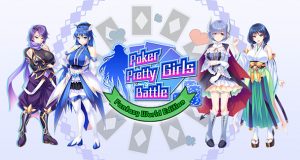