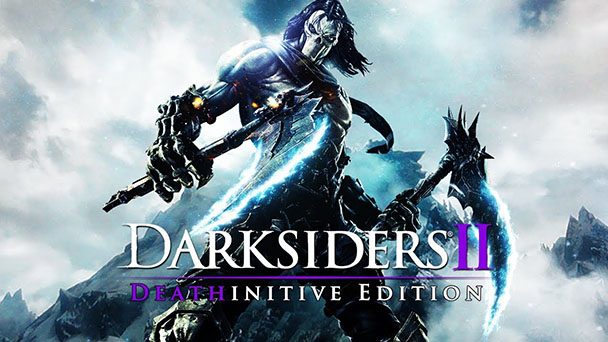 In the game industry, it’s an abnormality for an untested development team to deliver an inaugural hit, and an irrefutable miracle if they can sustain that success. As Realtime Worlds demonstrated with 2007’s Crackdown and Team Bondi with 2011’s L.A. Noire, even a marvelous maiden title is no guarantee for future fruition; both studios proved unable to build on their initial accomplishments and were subsequently forced to close.

Darksiders II demonstrated the team at Vigil Games able to defeat the sophomore slump, with the title receiving critical and commercial success. Unfortunately, it was the team’s final effort. In 2013, publisher THQ’s bankruptcy meant the end for Vigil. While tragic, few developers can boost of a concluding effort better than Darksiders II. Now the 2012 game has been revived for the Switch, collecting the base game, DLC, along with a handful of tweaks into a package called the “Deathinitive Edition”. Luckily, the port is much better than the pun. 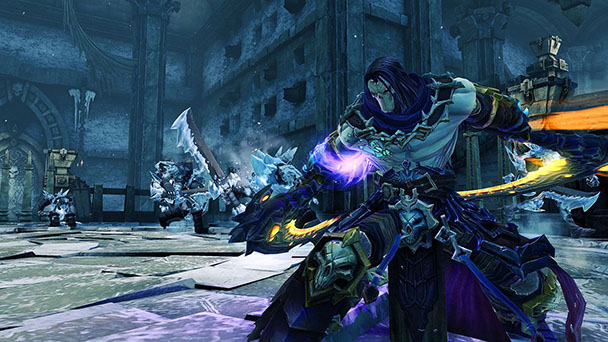 The Rare Sequel That Breaks the Mold

Many development houses mention to brainstorming sessions where groups convene to analyze a game’s strengths and weaknesses for a projected sequel. However, all too often the result is a collection of minor tweaks and negligible embellishments which serve as little more than back-of-the box bullet points. Although Darksiders II replicates some of the broadest design decisions of its predecessor, it’s obvious that Vigil decided to give the sequel the type of comprehensive and conscientious overhaul that occurs with shameful infrequency. Renovating components ranging from combat, environmental navigation, while adding in additional role-playing elements and even a loot system, Darksiders II offers an exemplar of how follow-ups should be fashioned.

Credit the game’s team of writers with offering a sequential continuation that merely apes the narrative arc of the first game. Instead, Darksiders II is set concurrently, as War- one of the Four Horseman of the Apocalypse, is charged with instigating Armageddon. Knowing these accusations are fabricated, his brother Death sets out to both reverse the damage to humanity and more importantly, find evidence to exonerate his sibling. Smartly, the developer’s resisted the urge to depict Death as a one-dimensional, horse-riding avenger. Crafted upon an absorbing dichotomy, Death can be both savage and aloof, other times exhibiting acerbic wit. Undoubtedly, Michael Wincott (Alien Resurrection, Seraphim Falls) deserves credit for his assistance in the characterization, adding enough nuance to maintain the anti-hero’s appeal through the game’s 30+ hour expedition. 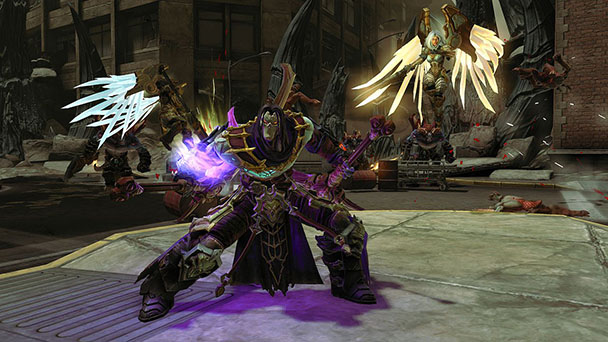 Playing with Death Is Surprisingly Fun

Death’s effectual agility and augmented arsenal is the other element that is likely to engross gamers. Generally, he moves with a litheness unseen by his indicted brother, whizzing around low-level enemies, while delivering velvety chains of rancorous violence. Beyond his weapon de rigueur- a pair of flesh cleaving scythes, Death also has access to a gratifying inventory to secondary arms, such as axes, hammers, glaives, maces and claws, supplementing his repertoire of combos even further. For the majority of Darksiders II’s playtime, combat remaining both compelling and substantial, only undermined by the appearance of swarms of combo-breaking foes during the title’s closing hours.

Satisfyingly, battles bestow a great deal of dividends- including experience points, dropped loot, and currency. Gaining levels allow players to cultivate two separate skill trees- The Harbinger, which allows basic combat skills to be augmented, and the Necromancer, which presents the ability to bolster Death’s defensive power and even summon minions to assist in battle. While Darksiders II’s trees and robust menus are a bit laggy, they do shroud a myriad of methods to customize Death. Prudently, the game allows you to re-spec your abilities and try alternative approaches to handling conflict. 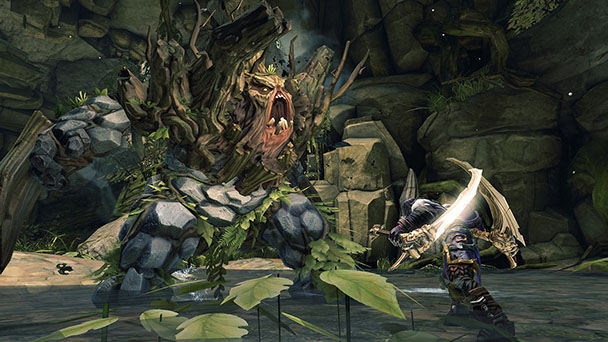 Complementing combat is the title’s well-groomed loot system, which incentivizes plunder at a proper level and rate while making item management a relatively hassle-free task. Beyond the archetypal stat-boosting armor and weapon pick-ups, players will find a large number of specialized enhancements to improve Death’s chance for criticals, amplify his experience growth, or even improve his probability of uncovering rare items. Cleverly, the title doesn’t require gamers to pause the action. Each unearthed piece of gear opens a small window disclosing any statistical boost and allowing Death to instantly equip the item with a single button press. Even junk items are handled proficiently, instead of obliging the dark horseman to pawn the goods at a local merchant, he can feed the items to ‘possessed’ weapons, supplementing specific attributes.

Darksiders II visual virtues are evident through Death’s excursion. Save for a perceptible drop in resolution when the action moves to wide-open spaces, the Switch port is visually adept, delivering the same detailed environments onto Nintendo’s hybrid. Each of the title’s four vibrantly colored realms are striking, juxtaposing wide-open landscapes with taut dungeons, each location offering a remarkable amount of architectural detail. Unlike the often sterile, premeditated pastures of Hyrule, the game’s articulation of scope and scale help construct an environment which feels naturalistic, elevating the sense of exploration. Harmonizing with the graphical opulence is Jasper Kyd’s score which smartly shirks the stereotypical orchestral swells of dark fantasy to underscore the title’s gradations. The sole sonic downside was inherited from previous console versions of Deathinitive Edition, with sound effect and voices sporadically dropping from the sound mix. It’s disappointing that THQ Nordic has let the glitch loiter years later. 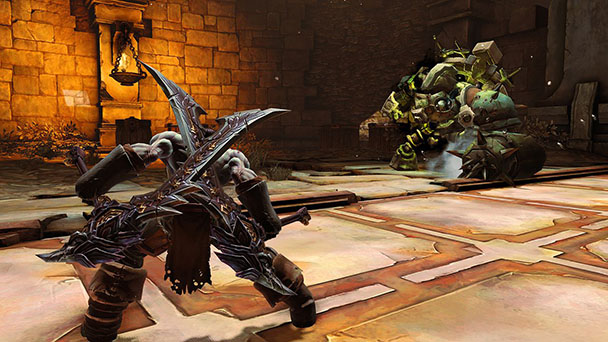 Darksiders II Errs on the Side of Leniency

Despite the game’s numerous merits, there are fleeting elements which detract from the title’s ambition. Quests which task gamers which gathering a quantity of items feels like padding, when contrasted with the game’s other, more interesting errands and puzzles. Boss battles are often pedestrian, entailing the same mechanics used to defeat the game’s prosaic underlings. That said, many might prefer the relaxed difficulty to the punishing tribulations found in the pre-patched release of Darksiders III.

Considering games are set in virtual realms, sequels can be unnecessarily ecological- salvaging, recycling and reusing the prevailing components of their predecessors. Darksiders II is the atypical follow-up offering an extensive redesign; whole systems have been renovated while new mechanics have been added. In the hands of most development teams, this could be an expensive, potentially disastrous undertaking. Yet, Vigil Games succeeded triumphantly, providing a triumph coda for a prodigious developer. Seven years later, Darksiders II remains an essential purchase for action game fans. 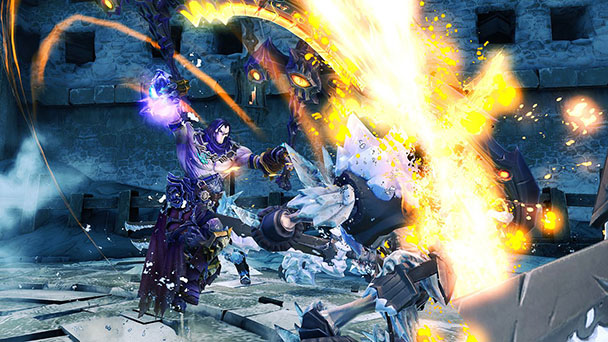 Darksiders II: Deathinitive Edition was played on
Switch with review code provided by the publisher.

Darksiders II: Deathinitive Edition review
In the game industry, it&rsquo;s an abnormality for an untested development team to deliver an inaugural hit, and an irrefutable miracle if they can sustain that success. As Realtime Worlds demonstrated with 2007&rsquo;s&nbsp;Crackdown&nbsp;and Team Bondi with 2011&rsquo;s&nbsp;L.A. Noire, even a marvelous maiden title is no guarantee for future fruition; both studios proved unable to build on their initial accomplishments and were subsequently forced to close. Darksiders II demonstrated the team at Vigil Games able to defeat the sophomore slump, with the title receiving critical and commercial success. Unfortunately, it was the team&rsquo;s final effort. In 2013, publisher THQ&rsquo;s bankruptcy meant&hellip;

Summary : With only the drop occasional drop in resolution, Darksiders II: Deathinitive Edition brings the 2012 tour-de-force title to the Switch with minimal sacrifice. This remains the highpoint of the series, offering a robust packages for players who missed the original release or just want to revisit the engrossing action title.