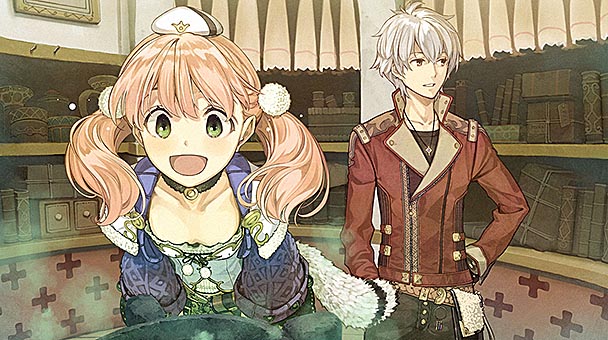 As successful game series spawn sequels, the push toward conceptual innovation becomes stronger. But one of the tragedies of this ambition is when imprudent mechanics are shoe-horned in to offset stagnation. Too often, these ill-developed elements can plunge a series into a near-irreversible state of mediocrity. Such was the fate of once-promising role playing properties like Wild Arms, Arc the Lad, Suikoden, Fable, and Dragon Age. Some might even make the claim that the beloved Final Fantasy franchise peaked with its efforts on previous hardware generations.

With the release of the fifteenth iteration in the Atelier series, players might assume that the Atelier Escha & Logy: Alchemists of the Dusk Sky would be fated toward a similar misfortune. After all, GUST has been extending their interpretation of item synthesis and character self-actualization since 1997’s Atelier Marie: The Alchemist of Salburg. However, a playthrough of the PlayStation 3 title demonstrates the developers’ efforts to conscientiously improve a number of key components. From the inclusion of the Dynasty Warriors’ LTGL engine (facilitated through Tecmo Koei’s acquisition of GUST), a storyline that not only interweaves the arcs of two protagonists, but also delivers a more mature tone- to an overhaul of the alchemical process, Escha & Logy establishes a new watermark for the franchise. 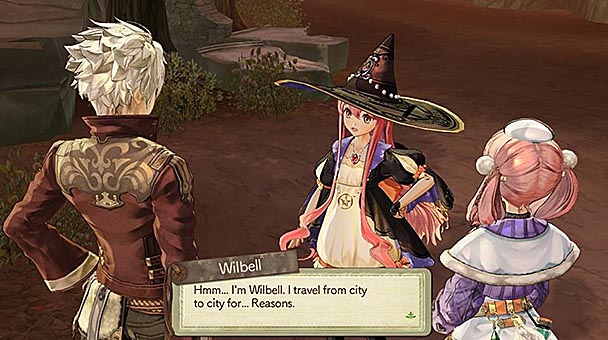 Watching protagonists such as Rorona, Totori, Meruru, and Ayesha realize their latent potential has supplied a number of inspirational experiences, but Alchemists of the Dusk Sky’s aspirations are a bit loftier. The story begins with players choosing to oversee the development of either Logix “Logy” Fiscario or Escha Malier. Although the game’s storyline remains the same regardless of character selection, the decision offers two divergent perspectives on events. For returning players, the perpetually upbeat Escha provides a character that’s similar to past protagonists, with Logy’s story mining the same melancholic undertone which drove Totori’s pursuit for her presumably departed mother.

Pleasingly, the complementary relationship between the characters never feels affected, and players will appreciate watching the duo progress together. Whereas most past Atelier entries focused on individual growth, much of Dusk Sky’s charm stems from witnessing the growing rapport between the two alchemists. Another prodigious plot element is the game’s antagonist. GUST understands that the best adversaries are ones which cultivate an iota of empathy within players. On a broader scale, Dusk Sky’s storyline poses some thoughtful questions, potentially getting gamers to think about the relationship between technological advancement and humanity at large. 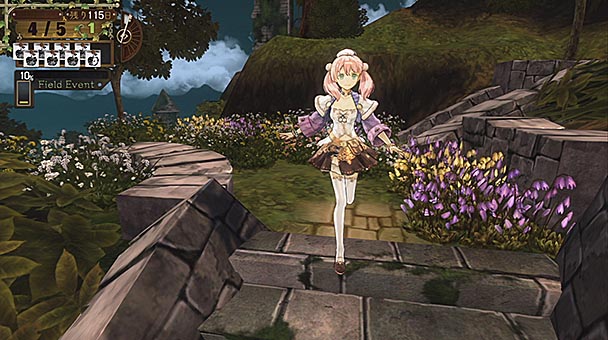 Thematically, Logy’s journey isn’t far removed from Miyazaki’s The Wind Rises, both tracing the ambitions of building a giant airship. For Escha, the objective is to use the craft to travel to the Unexplored Ruins- a destination that is rumored to rich with raw potential. Like Jiro Horikoshi’s motivations in the Studio Ghibli film, Escha is driven by the bringing hope to the disheartened townsfolk of Coleseit. As such, it’s easy to identify with each characters’ altruistic motivations. Although NPCs in role-playing games are often little more that foils for the main adventurers, here they are given personality, contributing poignancy and humor to the plotline.

Combat in the Atelier series can occasionally slide into the tedious across the forty-plus hour treks presented by most entries. Here, battles have been given a great deal of thought- striking an adept balance between accessibility and long-term allure. The skirmishes are guided by a number of different components- from a turn-order indicator at the top the screen, a two-tiered adventuring party, and an assist system where players can use their compatriots to absorb damage or issue additional attacks. Like Bravely Default, success hinges of the judicious use of the Support meter, a gauge which gradually fills with each new party command. Factor in nuances such as Escha and Logy’s alchemical skills, skill attacks which are learned as players level up, and even Special Support attacks, and warfare ends up edging on the sophisticated- without becoming plodding or convoluted. 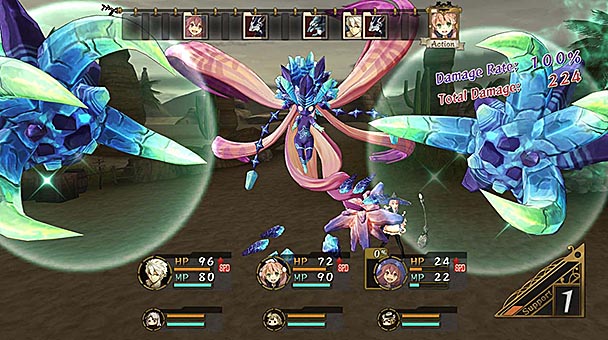 Likewise, the title’s item synthesis mechanic has been cleverly renovated. Materials uncovered during expeditions are used to make essential components, side-quest pursuits, as well as adventuring sundries like healing elixirs and improvised explosives. Selections such as item attributes and procedure order affects synthesis outcome, promoting experimentation from players. As with combat, crafting is multifaceted. Mercifully, Alchemists of the Dusk Sky provides players with a number of optional tutorials.

One of the points of contention in the Atelier series has been the game clock, which has placed gamers on a regimented schedule. With Dusk Sky the timetable is shorted and relaxed. Gamers should be able to easily complete the core goals within each four month duration, allowing for plenty of autonomous ‘free-time’ where characters can level up and work on a myriad on side-missions. The one blemish in the game’s structure appears in the fourth calendar year, with a challenge spike bound to infuriate gamers who didn’t see the adversity upturn coming. As such, even well-prepared players might need to consult a FAQ for assistance on the last few bosses. 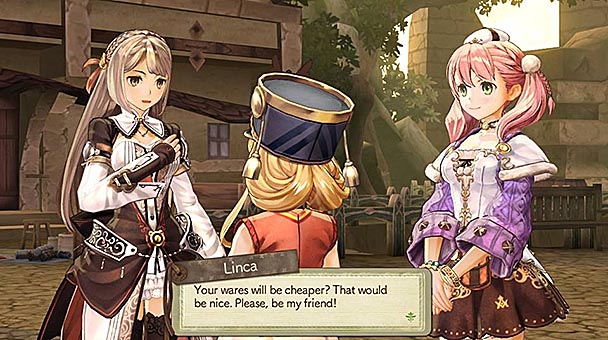 Visually, Escha & Logy’s new engine allows for a handful of visual enhancements. Moving through item collection areas often slowed the Atelier games down; now these segments flirt with a sixty frame-per-second delivery. Woefully, this fluidity isn’t consistent throughout the title. When there’s not much architecture on screen, camera pans move slowly. But once the game moves to busy areas, a sweeping perspective divulges screen shudder. Thankfully, Tecmo Koei went back to contemporary Atelier tradition by offering a dual language option. The downside this time is that the English language actors give a sub-par reading- it’s obvious that lines of dialog were recorded separately, making conversation disjointed. Beyond the vocalization, Dusk Sky’s soundtrack segues wonderfully, offering plaintive piano melodies as well as rollicking battle songs. For gamers who have a favorite piece in the Atelier series, the ability to assign song from past title is a considerate contribution.

Save for a difficulty leap in the game’s waning hours and some inferior English voice work, Atelier Escha & Logy: Alchemists of the Dusk Sky is a near-total triumph. With a storyline which shows subtlety, revised combat and crafting mechanics, and a new game engine, the title demonstrates a number of sensible changes. Atelier aficionados are bound to be delighted by the changes while newcomers will discover why the franchise has been so prolific. 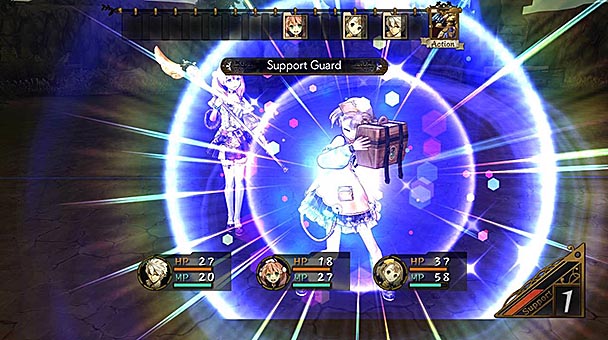 Atelier Escha & Logy Alchemists of the Dusk Sky was played on the PlayStation 3 with review code provided by the publisher.

Atelier Escha & Logy: Alchemists of the Dusk Sky Review
As successful game series spawn sequels, the push toward conceptual innovation becomes stronger. But one of the tragedies of this ambition is when imprudent mechanics are shoe-horned in to offset stagnation. Too often, these ill-developed elements can plunge a series into a near-irreversible state of mediocrity. Such was the fate of once-promising role playing properties like Wild Arms, Arc the Lad, Suikoden, Fable, and Dragon Age. Some might even make the claim that the beloved Final Fantasy franchise peaked with its efforts on previous hardware generations. With the release of the fifteenth iteration in the Atelier series, players might assume&hellip;

Summary : You’d think a franchise about item synthesis and reaching your potential would lose its steam after 17 years. But Atelier Escha & Logy: Alchemists of the Dusk Sky shows the series hitting a youthful stride.