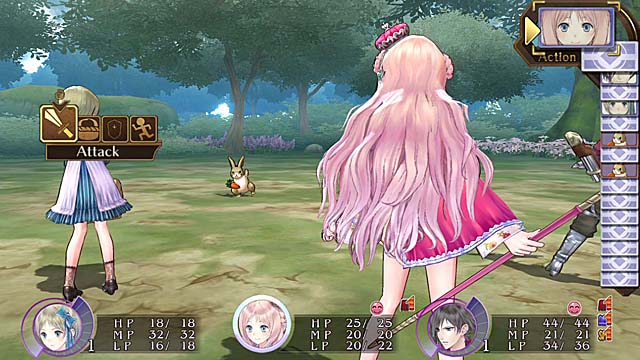 With playtimes which routinely transcend the thirty-hour mark, it’s not common for role-playing games to deliver a slow burn, engrossing players once the obligatory expositional elements are laid out. For Gust Corporation’s Arland series, the franchise didn’t really start cooking until the release of last year’s Atelier Totori: The Adventurer of Arland, a sequel which both streamlined and repaired some of the vexing mechanics of its predecessor. The recent release of Atelier Meruru: The Apprentice of Arland reveals the Nagano-based developer making additional modifications, resulting in a pleasing and poignant conclusion to the perpetually cheery series. By delivering a stalwart sense of smile-inducing charm and shirking a reliance on combat, Meruru offers an amiable alternative poised to recapture the respect of jaded JRPG players.

Whereas Rorona worked to prevent the shutdown of her Master’s workshop and Totori was tasked with finding her missing mother, Princess Merurulince (or Meruru) Rede Arls’ destiny is decidedly less individualistic. With the diminutive Arls Kingdom primed for absorption into the more developed and expansive Arland Republic, the reigning Lord hopes to suppress any detractors by enriching the fertile sovereignty. Among those sent to improve Arls is Tototi- who immediately develops a bond with the plucky Meruru. Enthralled by the visiting maven’s abilities, Meruru convinces her father that studying alchemy would both remedy the tedious life of a princess and be the best direction for the kingdom. Reluctantly, Lord Dessier offers up an ultimatum, giving Meruru three years to develop the miniature mainland, and cultivate a population of 15,000 people.  Although The Apprentice of Arland may lack the emotional poignancy of Atelier Totori, development of the region remains engaging thanks to the urgency of Meruru’s interminable inventory of tasks. 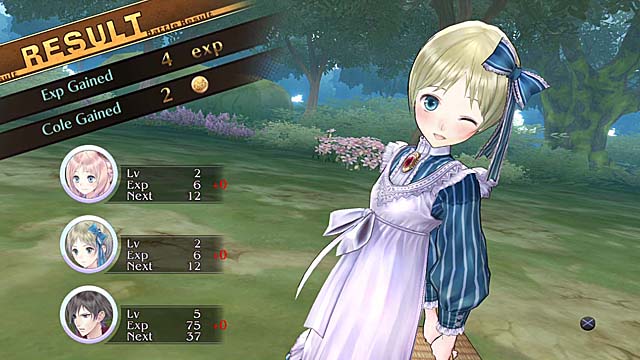 Instead of acquiring store reputation like Rorona or earning adventurer points like Totori, each request, hunt, and alchemical creation which Meruru completes earns development points used to adding new structures as well as upgrade existing ones. Smartly, each new building, pathway, improvement is not only rendered on the game’s sumptuous world map- but also pays dividends such as intensifying the alliance between party members give a booth to Meruru’s synthesizing stats. Naturally, construction also increases the size of Arls’ population- continually goading players to complete additional tasks. With an entangled web of variables and options, The Apprentice of Arland’s journey is decidedly non-liner, requiring players to constantly weight the merits of each new errand against a closing window of opportunity.

At the core of each entry in the Atelier franchise is the mechanic of alchemy, which requires players to combine a number of gathered or purchased materials into synthesized clothing, weapons, and goods.  From recipes which increase in number as player’s persevere, notations on the world map which show what kind of materials are available in each area, and later- the ability to send underlings on resource-gathering assignments,  The Apprentice of Arland flaunts an evolved alchemical system. Thankfully, synthesis still retains nuance, permitting players to quickly coble an item together or craft an item with exceptional quality, capable of giving a stat boost in battle. Arland veterans should appreciate an item bag capable of immediately transporting goods to her more expansive container. 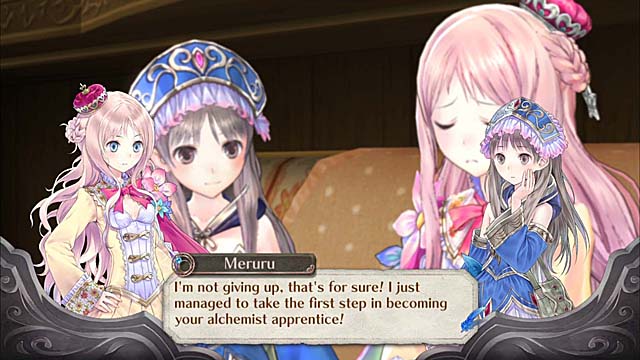 While the title’s turn-based combat doesn’t feel radically different from Totori’s modest tactics, a number of agreeably amendments are perceptible. Now, certain party members are capable of initiating group attacks and even guarding or performing follow-up attacks once their support gauges are filled.  Periodically, formidable boss characters will put Meruru’s synthesizing skills to the test, offering a sizeable quantity of development points if they are dispatched. The ability to avoid (or during a fracas- flee) most battles demonstrates that battles aren’t Arland’s focus, merely another pursuit vying for the player’s time, against a mounting deadline.

Visually, Atelier Meruru reveals a pleasing improvement over its predecessors, with polygonal models which elegantly emulate their character portraits. Save for framerate during resource gathering that edges on coarse and an absence of camera control, the title is habitually pleasing, endowing the kingdom of Arls with perpetual cuteness.  Following tradition, publisher NIS America gives gamers the options of Japanese or English language output. Regrettably, not all the game’s dialog is voiced, which would have aided the title’s bits of humor. Arland’s soundtrack reiterates the game’s upbeat vibe, although additional selections in the workshop would have been welcome. Earning the game’s best ending during an inaugural playthrough through seems unlikely, as the title demands a period of acclimation. Fortunately, Meruru’s New Game+ option allows players to begin anew, carrying not only familiarity, but also all their crafted equipment. 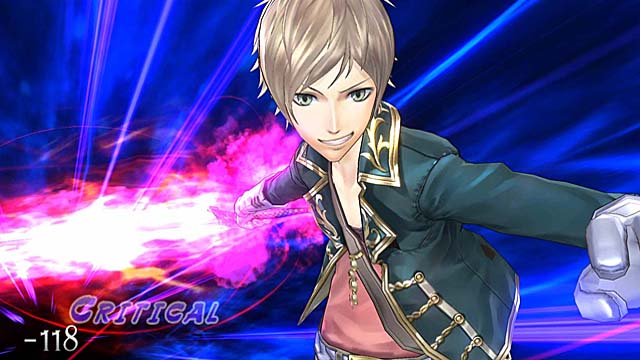 With a host of improvements which both streamline and simplify gameplay elements, Atelier Meruru: The Apprentice of Arland is a game ordained to please both franchise veterans as well as casual JRPG fans. Featuring an onslaught of opportunities for gathering, synthesizing, fighting, and building, the game’s stirred sense of urgency and engaging mechanics are capable of cultivating marathon sessions. Much like the protagonist of each series entry, Apprentice of Arland exhibits the kind of development able to nurture feelings of nostalgia as one reflects on the progress of Rorona, Totori, Meruru, and Gust.

Previous: New Releases for the Week of May 27th, 2012
Next: Mario Tennis Open Review