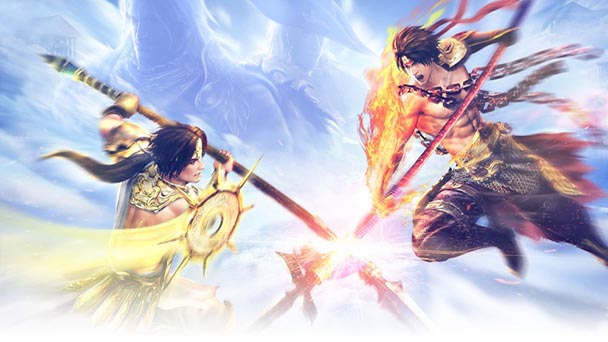 Romance of the Three Kingdoms author Luo Guanzhong once wrote, “The world under heaven, after a long period of division, tends to unite. And after a long period of union, tends to divide”. This observation also encapsulates developer Omega Force’s most famed franchises. For decades, Dynasty Warriors and Samurai Warriors have depicted fantastical rivalries and the unification of both Imperial China and Sengoku-era Japan. Traditionally, the Orochi series has brought the two groups of fighters together, creating a cross-over that bridges over a millennium, allowing for the intermingling of some of gaming’s most powerful historical characters.

The release of Warriors Orochi 4 demonstrates Omega Force’s understanding of what its fan-base adores. Less innovative than Dynasty Warriors 9’s attempt to bring the Three Kingdom’s combat into an autonomous open-world, the title doesn’t have the technical issues that troubled that title. Instead, Omega Force tunes the engine employed by 2017’s Warriors All-Stars, allowing for a faultless depiction of unrestrained power. It probably won’t appease the complainers who gripe about the perceived passiveness of infantry, but for those who understand the developers’ intentions, the seventy mission campaign is gratifying. 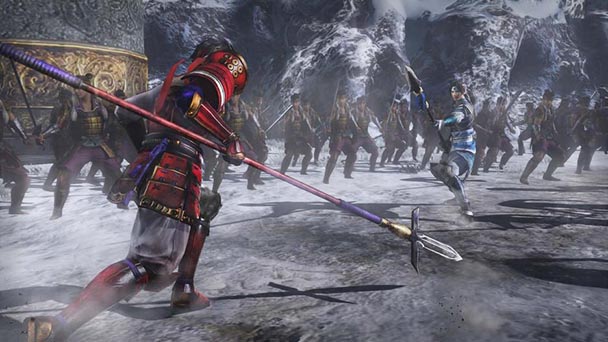 Picking up after the events of Warriors Orochi 3, the game’s fighters have forgotten about the fight against the maiden-eating, eight-headed serpent and returned to their respective worlds. But when Zeus’ re-summons the Warriors and their allies, the two factions of fighters seek out eight golden bangles hewn from Meduda’s locks. Only by obtaining the bracelets can the Warriors hope to return to their respective homes.

The script is penned by Suikoden and The Alliance Alive writer Yoshitaka Murayama, whose presence reveals an ambition for an stimulating plotline. While the concept that brings the game’s roster together might be a bit trite and slightly hard to follow, Murayama’s dialog largely overcomes these blemishes. Teams comprised of members from Dynasty Warriors 8: Empires, Samurai Warriors 4-II, five Greek gods, as well as returning Orochi officer Mizuchi all stay true to character, creating some spirited moments. Coupled with a bit of intrigue as the game’s gradually reveals Zeus’ intentions, Orochi 4 conversations are quite fun, especially if you have a familiarity with the encyclopedic amount of source material. While Dead or Alive, Atelier, Ninja Gaiden, Deception and Nights of Azure’s strong-willed females are apparently confined to Omega Force’s All-Star franchise, the strong banter here helps offset their absence. 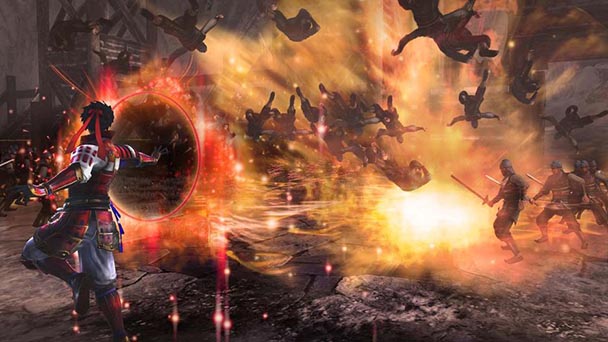 The other element that helps Orochi overcome the absence of beloved characters like Honoka, Kasumi, Plachta, Sophie, and Ayane is the awe-inspiring feeling of supremacy on the battlefield. As with previous series entries, Orochi 4 takes a tag-team approach to battle, permitting players to freely switch between a trio of characters. While you’ll probably establish a groove with a single character, you’ll want to shift between Warriors, since the two combatants in reserve gradually replenish their health and musou gauges.

Seeing Naotora Li’s transition from a girlish walking animation into a devastating combo that sends a swarm of soldiers reeling backward before singeing them with an energy wave is a delight. But being able to keep a chain going by shifting characters after a charge attack feels downright invigorating, with Orochi 4 communicating an awesome sense of power as you sweep the area free of soldiers. Naturally, you won’t be able to use some of your most powerful strikes against officers, who will block or parry your attacks. These showdowns are where the challenge occurs, forcing players to read and respond to enemy actions. 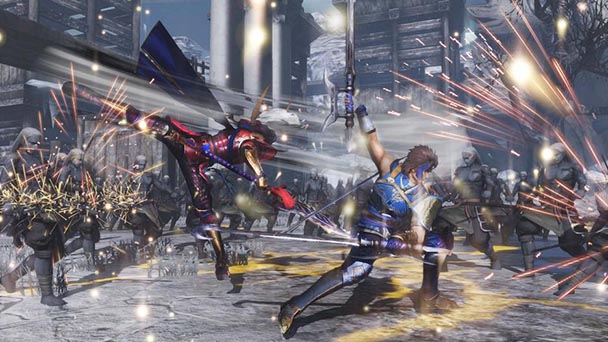 This time out, magic plays a fundamental role on the battlefield, with a press of the right bumper and a face button summoning four different types of spells. From calling your faithful steed, releasing a spell that can freeze adjacent opponents, or expending a topped-off magic gauge for an astounding, crowd-clearing attack, magic brings another set of musou-like abilities. Since some enemies also have the capability, you’ll want to cast a magical attack when they’re entangled in a summoning animation, demoralizing their efforts in a breathtaking style.

Unlike Orochi 3’s branching campaign, the game’s five-chapter trek plays out in a linear fashion. While some will miss the intermissions where you walk around a hub as you prepare for the next mission, Orochi 4 isn’t without sophistication. Here, weapon drops and experience augments your characters. Pleasingly, unused characters can be sent off on missions, fetching materials and experiences during their endeavors. As combatants work alongside one another, bonds develop, providing additional growth. Of course, the linear nature of the campaign still has a few downsides. If you’re hoping to play as a certain member of Orochi 4’s 170-strong cast, sometimes you’ll have to wait until the character is unlocked through play or during one of the game’s sporadic side-missions. 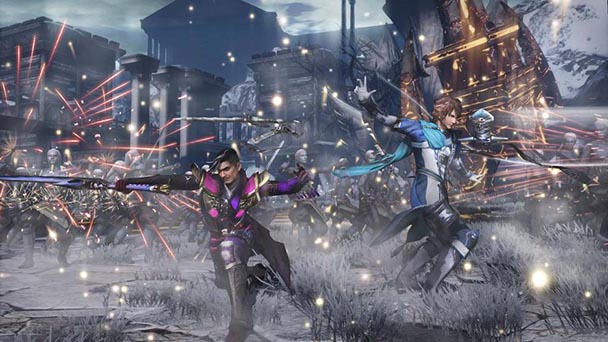 As long as one player has unlocked a mission, a cooperative partner can join in on the undertaking, which is one of the best ways to enjoy a musou game. Alternatively, players can opt to take part in Orochi 4’s three-on-three battles, where teams vie for control of bases. A few variations like limited character switching and healing of reserve characters are employed to make the proceedings more competitive. But largely, the Battle Arena feels like a novelty, and it seems a bit unlikely if there’s enough distinction and strategy to support a long-term community. At the time of Orochi 4’s release matchmaking was a bit suspect as well.

Dynasty and Samurai Warriors’ PC ports have an uneven performance record. Fortunately, Orochi 4 plays like it was built from the ground up for Windows-based machines. On a i7 with a GTX1070 GPU, the game pumped out 1080p/60FPS without any fluctuation in framerate- even when physics-heavy effects filled the screen. Although asset recycling and remixing are evident, Orochi 4’s shift in context obscures the practice. 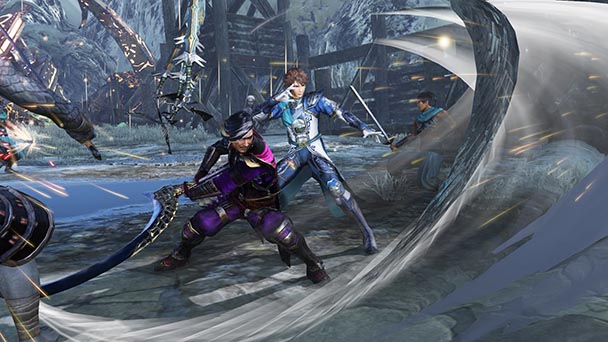 Following Dynasty Warrior 9’s contentious release, Warriors Orochi 4 shows Omega Force playing to their strengths. While the game’s linear structure and resistance toward reinvention might deter casual interests, musou aficionados will be delighted by the game’s roster of 170 playable characters and the sense of dominance on the battlefield. Plowing down hordes of subordinates has never felt more satisfying, and Orochi 4 makes you feel like the badass who’ll be remembered and revered for centuries.

Warriors Orochi 4 was played on PC with review code provided by the publisher.

Warriors Orochi 4 review
Romance of the Three Kingdoms author Luo Guanzhong once wrote, &ldquo;The world under heaven, after a long period of division, tends to unite. And after a long period of union, tends to divide&rdquo;. This observation also encapsulates developer Omega Force&rsquo;s most famed franchises. For decades, Dynasty Warriors and Samurai Warriors have depicted fantastical rivalries and the unification of both Imperial China and Sengoku-era Japan. Traditionally, the Orochi series has brought the two groups of fighters together, creating a cross-over that bridges over a millennium, allowing for the intermingling of some of gaming&rsquo;s most powerful historical characters. The release of Warriors&hellip;

Summary : Long before God of War imparted the feeling of being the most formidable force on the battlefield, Omega Force did the same with China and Japan’s venerated heroes. Warriors Orochi 4 takes that notion to the extreme, as teams cleave through opposition and when confronted by rivals, generate screen-filled displays of might.