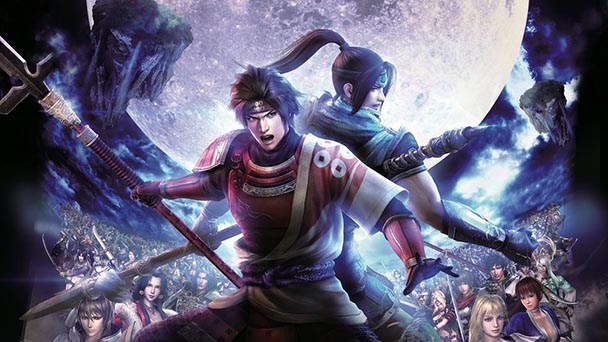 Much like the franchise’s unremitting cavalcade of enemies, Omega Force’s Warrior series has grown increasingly prolific, showing no signposts of surrender. Following Dynasty Warriors 2’s release in 2000, the franchise has forked into a variety of settings, covering not only Romance of the Three Kingdoms-era China, but also Japan’s Sengoku period, as well as venturing into Grecian conflicts, and even the Hundred Years’ War. Hoping to perpetuate their success beyond semi-historical contexts, Omega Force branched out further with Warriors Orochi, a title which used a fantastical plot device to unite both Dynasty and Samurai Warriors’ rosters.

Given the evolving developmental process, it’s not surprising to find that the release of Warriors Orochi 3 Ultimate for the PlayStation 3, PlayStation 4, PS Vita, and Xbox One is actually the third iteration of the title. Following the original release in 2012, Wii U owners received the Hyper Edition, which added a few amenities to an already humungous time sink of a title. Ultimate enlarges the compendium even more, offering a collection of 145 returning characters and Koei-Tecmo cameos, multiple new modes, and a bevy of tweaks to the game’s musou mechanics. 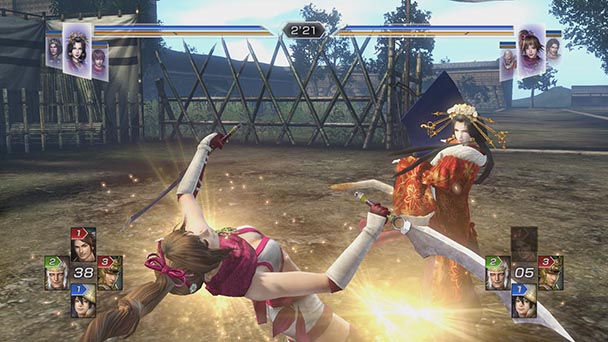 For players who haven’t picked up a Warriors title in a few years, the experience can be enthralling, as gamers are goaded on by a persistent procession of unlocks and character boosts. For those who already played their way through Orochi 3, Ultimate’s new modes don’t demonstrate the advancement of the core game, making the supplements a pricey, but admittedly attractive, proposition.

Players who made headway in the original version of Warriors Orochi 3 for the PlayStation 3 have the ability to import their save data into the PS3 or PS4 versions, as long as they’ve updated their game with the latest patch. In execution, the cloud-based data transfer worked flawlessly on the PlayStation 4, ushering in my character roster, experience levels, and campaign progress, permitting players to quickly  access Ultimate’s new content. 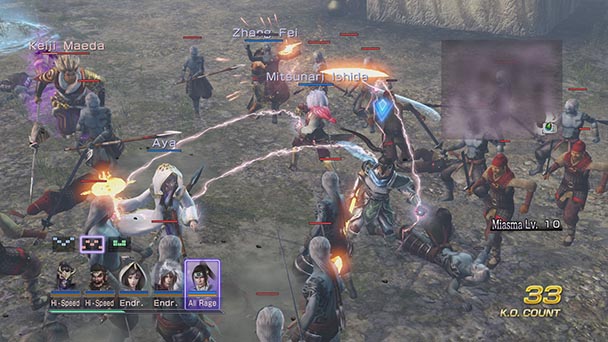 Four new missions frame Warriors Orochi 3’s storyline, extending the main narrative with a prologue and epilogue. To explain the convergence of combatants separated by over a millennium of history, the game employs time travel as a plot device. It’s a bit hokey at first, until you realize the set-up allows for an indulging allocation of game content. The opening stage follow Warriors’ last three fighters- Hanbei Takenaka, Ma Chao, and Sima Zhao, who valiantly confront a hydra despite the loss of their comrades. As defeat becomes increasingly evident, a mystic appears and chaperones the combatants to safety, before sending them back in time to re-experience the battles that killed their brethren.

After a few minutes with the title’s story mode, some of Ultimate’s changes reveal themselves. Whereas later iterations in the Dynasty Warriors allows players to switch weapons on the fly, here a trigger press instantly swaps between three soldiers, opening up the possibility for combos that send entire battalions billowing in the air. Infantrymen in older games might have taken a strike or two to incapacitate. Now, even inexperienced characters can swat away peons like piles of paper dolls. Pressing down on the direction-pad puts the whole trio on-screen, with AI assistance taking sporadic potshots at opponents. Largely, it’s your controlled characters that will be winning the war. 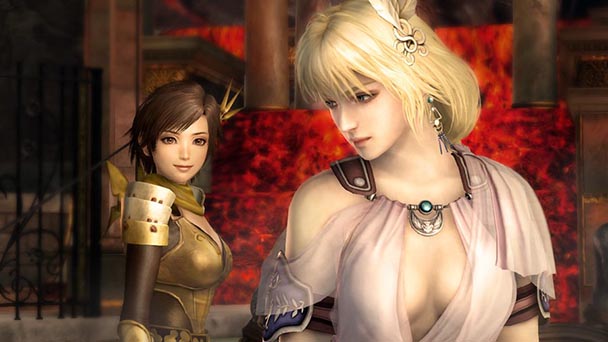 During a stage, dividends prove plenty, from temporary stat boosts to experience points and new weapons. Once you’re completed the stage, you’ll be send back to your swelling village where a largely intuitive weapon fusion system that replaces Dynasty’s Warrior’s forging component. Regretfully, not all of Ultimate’s elements are as instinctive- and without much in the way of tutorials, players will have to rely to experimentation to make sure their heroes persist. Beyond a star-rating exposing the general difficulty of a stage, there’s few other indicators of challenge in the game. As such, if gamers don’t want to squander the 30-45 minutes it takes to complete a mission, they’ll advance carefully, leveling their characters and fleeing the level boss capable of locking them into fall animations.

Those seeking even more advanced level of adversity can take refuge in Gauntlet Mode. These trying tests task gamers with making a five member team through a map that’s veiled by a fog of war. Against a difficulty that increases with both time and the number of opponents defeated, players must move through the stage to activate games while procuring the occasional piece of loot. Make it through alive and you’ll get to keep any treasure and unlocked characters, while those succumbing to the stage limp away with just any earned experience points. Pleasingly, any earned bonuses carry over to Ultimate’s main mode. 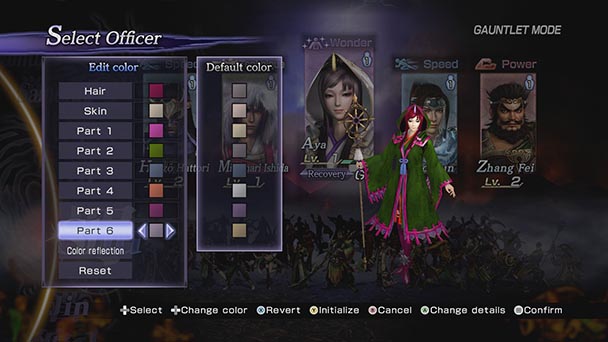 Hyper’s curious Dual Mode makes a reappearance, and while the one-on-one fights probably won’t absorb solitary players for too long, they offer an interesting diversion when two humans gather. Although Dynasty Warrior hack-and-slash mechanics don’t allow for graceful of even balanced battles, the integration of skills cards help to elevate conflicts. The more powerful the card, the longer players have to wait a cool-down time to expire, adding at least one interesting element to the fights. Likewise Musou Battlefields is amusing distraction but in need of additional refinement. In concept, creating and sharing your own custom stages sound like a dream come true for Dynasty veterans. However in execution, Ultimate allows for such a small scant amount of customization, like exchanging officers, that the end result doesn’t feel distinctive.

Platform Comparison
Fundamentally, Warriors Orochi 3 Ultimate on the PS Vita does a great job at emulating the experience of playing the title on console. Sure, there’s at least one control issues- using either the touchscreen or a flick on the back of the portable to switch characters doesn’t feel as uniform as pressing a controller button. Similarly, there a conspicuous shortage on on-screen enemies. But look past these shallow issues and the game playing surprisingly well on the Sony system, with a framerate that strives for fluidity and only breaking during significant amounts of on-screen activity. Pleasingly, the Vita version allows for importing your Warriors Orochi 3 PlayStation 3 save data and for the hardcore, a cross-save capability between the PlayStation 3 and PlayStation 4 version of the game.

Given the power of the PlayStation 4 hardware, next-gen owners might be a little disappointed with the game’s visual delivery. Sure, character details look great (and you can even customize color schemes ala Samurai Warriors 3) and the framerate strives for sixty frame-per-second, but other details divulge that Ultimate wasn’t built from the ground up for PS4 owners. Backgrounds looks drab and when large crowds of enemies appear on-screen, pop-up can be conspicuous. Sadly the game is a slight downgrade from Dynasty Warriors 8 Xtreme Legends Complete Edition.

Given the quality of the soundtrack, it’s gratifying to know that each iteration of the game features the same great sonic selection. With a set list which culls Dynasty Warriors’ searing guitar riffs, Samurai Warrriors’ shakuhachi-tinged techno, and Orochi’s energetic originals, Warriors Orochi 3 Ultimate has a remarkable collection of songs, poised to please most any taste. 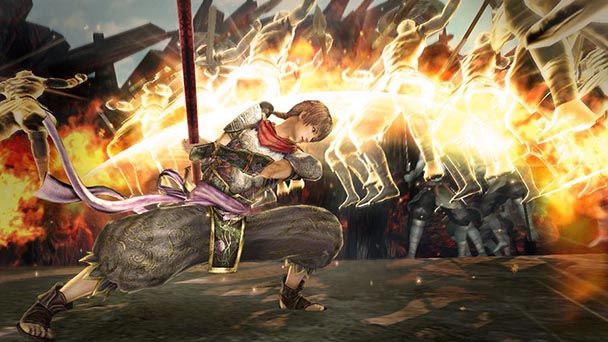 While gamers may be lured by the inclusion of Koei-Tecmo notables like Dead or Alive’s Kasumi, Tekken’s Sophitia, or even Atelier Meruru: The Apprentice of Arland’s Sterkenburg (sadly, Rorona, Totori, Meruru, or Ayesha didn’t make Orochi’s roster), these playable characters are only a small piece of Warriors Orochi 3 Ultimate’s cornucopia of content. For gamers able to endure musou mechanics, the title offers a new watermark of Warrior substance, able to occupy fans for weeks, and obsessives even longer.

Summary: Warriors Orochi 3 Ultimate is a grand collection of quasi-historical characters, multiple modes, and enough hack-and-slash gist to wear the paint off of your controller buttons. For franchise fans and those curious about the formula, Ultimate truly lives up to its mighty moniker. 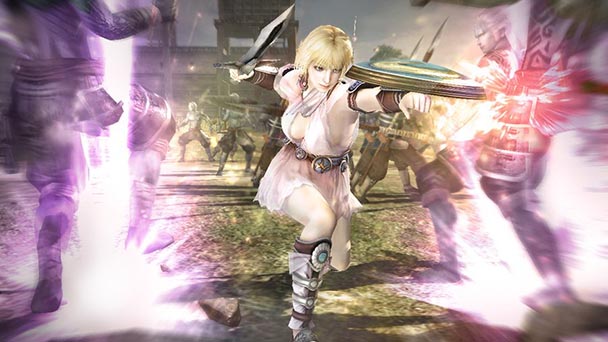 Summary : Warriors Orochi 3 Ultimate is a grand collection of quasi-historical characters, multiple modes, and enough hack-and-slash fodder to wear the paint off of your controller buttons. For franchise fans and those curious about the formula, Ultimate truly lives up to its mighty moniker.