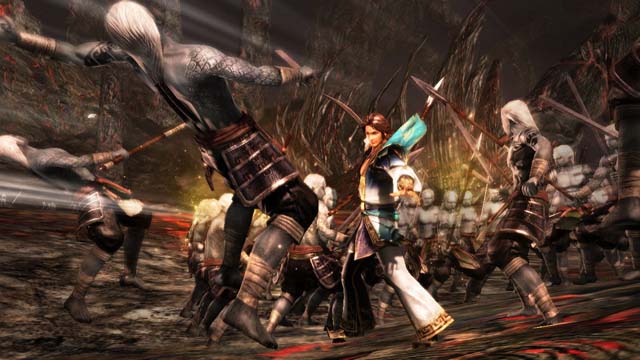 Across the last twelve years, Omega Force’s musou games have often been assailed for their repetitive combat. To help counterbalance these criticisms, the Yokohama-based developers have crammed an encyclopedic amount of content with each successive iteration. Last year’s Dynasty Warrior 7 had a roster of sixty-five playable historical figures, a number that was further augmented with the release of add-on Xtreme Legends. Yet, by combining the Dynasty Warriors and Samurai Warriors franchises into one giant fan-fermenting mash-up, all of Tecmo Koei principal series are dwarfed by the herculean amount of substance crammed into the Warriors Orochi games.

While Xbox 360 owners are able to enjoy the fantastical unification of China’s late Han Dynasty and Japan’s Sengoku period by putting a disk into their drive trays, PlayStation 3 owners don’t have it quite as easy. Due to Sony’s requirement of dubbed voice-overs for physical media, Warriors Orochi 3 is only available through an eleven gigabyte download. While that means hack-and-slash satisfaction may be delayed a few hours, the upside is that the PS3 version is priced ten dollars cheaper, at $49.99. 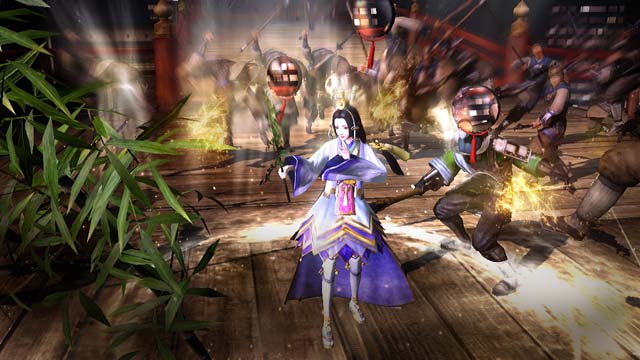 The impetus for reunification between these two discrete cultures is conveyed during Orochi 3’s prologue, as a group of hardened warriors struggle to defeat a ferocious eight-headed creature threatening extinction of the world. As a desperate effort, the heroes venture into the Hydra’s lair but are gradually defeated by the overwhelming strength of the beast- forcing a mortifying retreat. Now, the sole hope of survival is bound to a mystic’s ability to manipulate time- sending the surviving warriors back to rescue their fallen comrades. While Orochi’s plotline can be wonderfully implausible at times, players yearning to learn more are given an enormous amount of reference material.  From synopses of the event in previous Orochi titles to the ability to review cinematics, the game’s gallery options are plentiful.

On the battlefield, Warriors Orochi 3 matches its amplified roster with combat mechanics that are equally inflated. Recalling Dynasty Warrior 7’s weapon switching attacks which were capable of elongating combos, Orochi 3 allows players to execute devastating strikes by switching between members of their party, à la Marvel vs. Capcom. Like the tag-team fighter, heroes who are swapped out gradually regain health and musou, endowing the title with a slight strategic element. Those familiar with the often frantic skirmishes of the Dynasty Warriors franchise will be pleased to know that Orochi’s combat is especially impassioned. Once players have mastered the Switch Combo, battles converge on the incomprehensible, as the screen becomes flooded with packs of batted foes. Like previous games in the Warriors linage, there’s a sizeable gulf in the challenge level between the normal and elevated difficult settings. As a result, games can be either too easy (particularly with certain party groupings) or on hard, frustratingly strenuous. 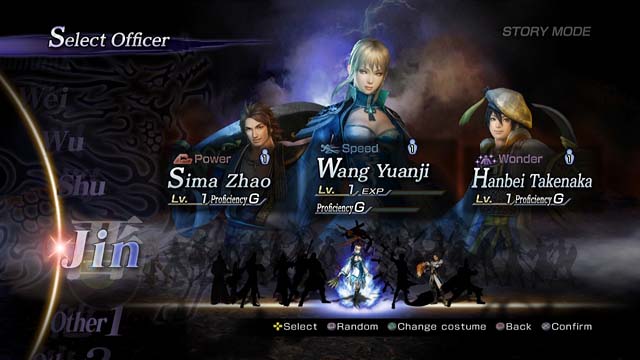 Beyond the archetypal crowd-clearing combinations, Warriors Orochi 3 also delivers a nice variety of formidable musou attacks. With an advancement of Dynasty Warriors 7’s bond system, characters can build beneficial alliances- even hosting coalition-cultivating banquets when not offering assistance during a mission. Beyond providing supplementary strikes and unlocking additional stages, bonds are the key to enabling the potential of True Union Arts. Once a faction relationship is solidified, a simultaneous press of the L2 and R2 button unleashes an annihilating attack executed by up to three members, capable of debilitating the sturdiest enemies.

Away from the frontline, towns present a host of preparative undertakings. Here, players can purchase and fuse weapons, empower characters through the distribution of Growth Points, and manage stat-boosting items. The settlement’s Network Assistant grants access to online play through the title’s Story of Free Play mode if a local participant isn’t available. Undeniably, Orochi 3’s most promising feature can be found with its Musou Battlefields component, where players can tweak completed levels, add key elements and even adjust the dialog. Regretfully, the mode wasn’t available at the time of the game’s launch. 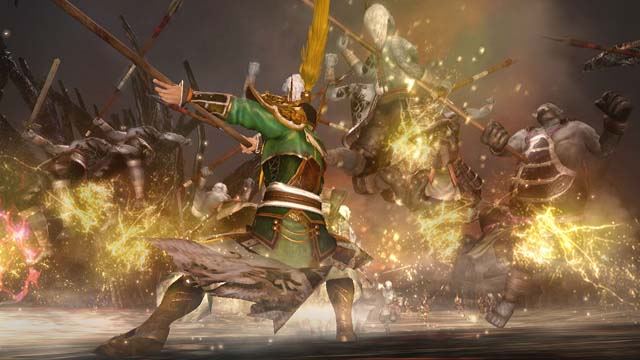 Expectedly, Warriors recycles much of the assets and animation routine from its musou brethren. While character garments waft pleasingly and weapons are renders in opulent detail, the amount of on-screen activity can sporadically cause a fluctuating framerate. Although the game never dips into unplayable jurisdictions, moments of faultless fluidity make the twenty-five frames per second output appear unpalatable.  Musically, Orochi 3 mines the same sonic territories as Omega Force’s previous efforts, juxtaposing grinding guitar riffs against soothing piano melodies. Those who plunked down cash on DW7’s supplemental costumes will be saddened to learn that the title doesn’t import any of the amenities.

Bolstered by a gargantuan roster sprinkled with a number of pleasing Tecmo Koei cameos, Warriors Orochi 3 delivers a satiating serving of fan service. Although critics are bound to dismiss the game, Omega Force’s fanbase could easily become immersed by the game’s minutiae. Hopefully, any resourced saved by skipping a physical release and providing a dubbed voice-over can be used to help refine the graphical engine, lest we visit these Warriors once more. 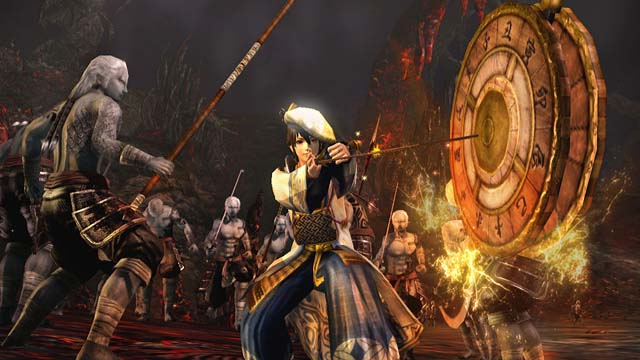