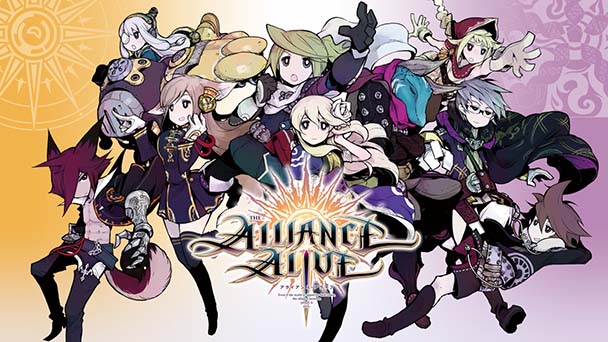 The twilight era for gaming systems routinely brings about a software schism. On one side, there’s an abundance of shoddy shovelware that has curiously eluted quality control standards. Prompting by the size of the install base, you’ll find rapidly-coded clones of popular titles, hewn by developers trying to make a quick buck. On the other side, you’ll find the type of prodigious efforts that demonstrate developers wringing every last drop of processing power from a platform. Often, these efforts are empirically designed, built by studying what has worked on a particular system and what concepts have yet to be realized.

Arriving during what will likely be the last bountiful year for the Nintendo 3DS, The Alliance Alive isn’t perfect, but comes close to being in the latter camp. Much of the game’s merit is rooted in the skillful approach, which while giving players direction, also extends an astounding amount of autonomy for a portable title. While console role-playing games often let players determine their approach, portables ones typically aren’t as indulgent- making The Alliance Alive an essential experience for RPG devotees who own Nintendo’s dual-screen device. 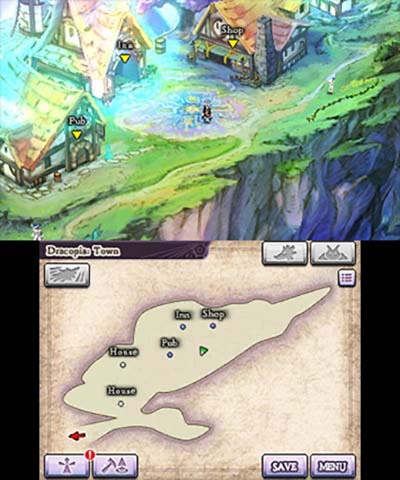 Although 2015’s The Legend of Legacy was predominantly developed by Cattle Call and Grezzo, several industry vets from FuRyu lent their expertise to the title. With The Alliance Alive, many of core creatives return, extending mechanics that simultaneously evoke the mechanics of the golden age of role-playing, which offering enough innovation to ensure that Alliance is no retread. If you’ve enjoyed the genre for extended span, expect to marvel at how intuitive it all feels, and how the studio managed to get a myriad of moving parts operating in near-perfect unison.

Yoshitaka Murayama, the director and writer of the first three Suikoden games, lends his prodigious talents to the game. Once again, he’s crafted a storyline that’s full of the genre’s requisite twists and turns, yet shirks convolution. The game’s prologue establishes a backdrop where a disheartening dominance looms both in the hearts of the populace and across the drab skies above. After the deployment of the Great Barrier, the world has been segregated into five realms, pushing a faction called the Beastfolk to bully the citizens of Rain Realm about. Another woeful consequence is the persistent layer of clouds in the lower atmosphere, blanking the land with an unrelenting cover of grey. Yet, a seed of hope emerges when a painting depicts an azure sky and a flying ark, suggesting that the possibility of revolution is possible. 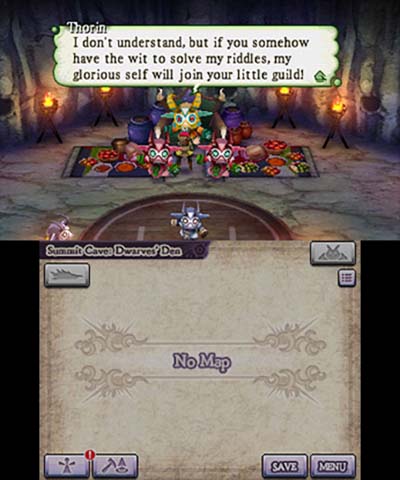 Pleasingly, Murayama’s script doesn’t succumb to protracted expository, steadily developing context and character along the way. Another interesting angle is that the narrative doesn’t have an individual focus, opting to shift the spotlight across an ensample of its nine party members. While there’s a seriousness surrounding the proceedings, the tone avoids becoming too melodramatic, making the forty-hour adventure feel thoroughly enjoyable. The sole downside is dialog and even cutscenes lack any type of voice acting, muting some of the emotional impact during pivotal plot points.

But assigning distinctive inflections to the cast might have been difficult, given the mutability of characters. Refreshingly, Alliance Alive moves away from the rigid Dungeons & Dragons style tropes, permitting players to nurture their own distinct adventurers. Sure, members start with an identifiable affinity, but almost any character can be equipped with any of the game’s seven types of weapons. 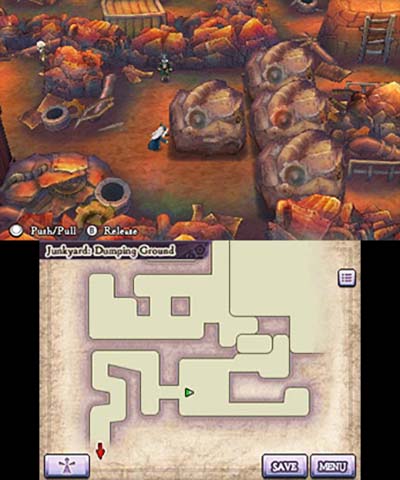 Naturally, it might make for an awkward fit at first, with a reedy Signimancer able to wrap his hands around a hulking broadsword. But stick with the weaponry, and your repertoire of abilities, called Arts will continue to grow. Instead of earning upgrades at a slow but steady pace, the use of an art can prompt a character to Awaken, where they’ll either improve the ability of their Art, or learn a new one. During much of Alliance Alive, it occurs at an energizing frequency, making combat persistently interesting, as you experiment with your new abilities and acquire new ones that renew the gameplay loop. Gratifyingly, the game gives you further control over the cultivation of your characters, spending skill points or even opting to seal Arts, where you’ll forgo new abilities to augment your existing ones.

Additional strategizing is rooted in Alliance Alive’s Formations, which reflect the battle stances adopted by your party. Adjustable at the beginning of every turn, that allow your team up to five combatants to be placed on front, middle, and rear zones. Additionally, there are a trio of functions available, with characters able to Attack, Guard, or Support, thereby earning potential stat bonuses. Like many of Alliance Alive’s other components there’s a lot of flexibility, and much of the fun steam from micromanaging Formations and positional roles, to gain an upper hand against foes. Since different enemies are vulnerable to specific types of attacks, the title goads gamers into studying details and experimenting with the myriad of tactical opportunities at your disposal. 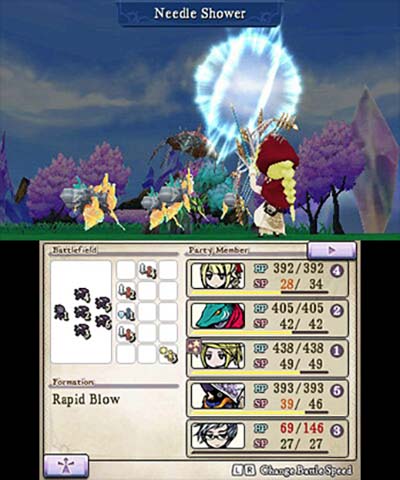 Given the game’s sprawling overworld and the occasional daunting danger that can devastate your party, you’ll need to glean every last advantage. And fortunately, there are a myriad of ways to improve your odds. There are five different guilds who specialize in everything from Signimancy, blacksmithing, to reconnaissance. Typically held up in sprawling spires, these factions can offer an immediate assistance, using say cannon fire to pelt any antagonists you encounter. But they’re arguably more helpful in the long term, with allegiance extending new spells, weapons and armor, and more effective survival tools. Cleverly, the guilds are populated with recruited procured during side-quests, making what’s often meddlesome work feel indispensable.

The sheer number of interconnected systems could sink other games in convolution. But with Alliance Alive components are all intuitively designed, transparently expressing effectiveness or inadequacy. Satisfyingly, there’s seldom a requirement to grind simply to inflate the stature of a boss battle. Save for one or two instances (a midpoint party split and subsequent battle is notably thorny), it’s usually possible for your team to avoid those moments of compulsory battle training. But should you want to strengthen the party in an effort to help alleviate the difficulty, the title offers a fast-forward feature that lets you zip through petty scraps. 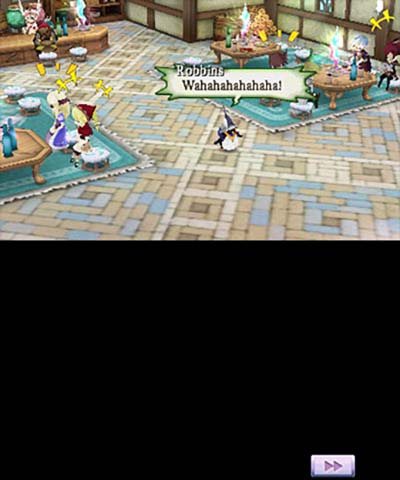 Save for Masashi Hamauzu’s multiplicity of melodic accompaniments, The Alliance Alive aesthetics are a bit utilitarian. While most will be fined with the chibi characters, the lack of voice and limited facial expressions undermines impact, while the limited use of stereoscopic functionality is curious. On the upside, the use of a watercolor-esque palette and environmental variety across the five realms make up for a presentation that doesn’t relish detail. While The Alliance Alive isn’t a visual stunner, it’s rarely unattractive, merely uninspired.

Reflecting on the 3DS’s software library, there are an assortment of exemplary role-playing games. But few match the level of autonomy offered by The Alliance Alive. FuRyu’s latest is remarkable for giving players a great deal of independence, with progression system echoing the Square’s SaGa series. With a compelling storyline, enjoyable combat, and the ability to modify a multitude of tactical elements, The Alliance Alive is distinctive and undoubtedly deserves a place in your 3DS collection.

The Alliance Alive was played on the 3DS with review code provided by the publisher.

The Alliance Alive
Developer: Cattle Call, FuRyu, Grezzo
Publisher: Atlus (US), FuRyu (JP)
Release Date: March 27th, 2018
Price: $39.99, available via retail and the Nintendo eShop
The Alliance Alive review
The twilight era for gaming systems routinely brings about a software schism. On one side, there&rsquo;s an abundance of shoddy shovelware that has curiously eluted quality control standards. Prompting by the size of the install base, you&rsquo;ll find rapidly-coded clones of popular titles, hewn by developers trying to make a quick buck. On the other side, you&rsquo;ll find the type of prodigious efforts that demonstrate developers wringing every last drop of processing power from a platform. Often, these efforts are empirically designed, built by studying what has worked on a particular system and what concepts have yet to be realized.&hellip;

Summary : Save for the lack of any voice acting and a lowkey visuals, The Alliance Alive is an outstanding role-playing experience, that gives players an astonishing amount of autonomy.