The Legend of Heroes: Trails of Cold Steel II review 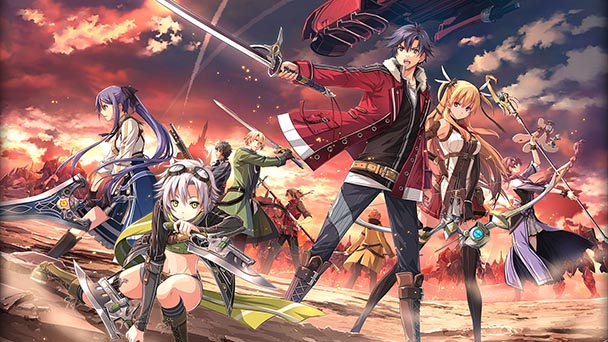 Media sequels can fall victim to their own version of middle child syndrome. Whereas inaugural efforts revel in world-building as well as character backstory, and concluding episodes are elevated by contributing a sense of closure, middle installments have it tougher. With context and a majority of main characters already established, they are tasked with maintaining momentum and cultivating anticipation for any concluding chapters. It’s this type of precarious predicament that The Legend of Heroes: Trails of Cold Steel II faces.

Sandwiched in the middle of last December’s stateside release of Trails of Cold Steel and a presumed concluding chapter that’s been announced but remains unreleased in Japan, the title needs to both replicate some of the accomplishments of its predecessor and contribute enough innovation to justify its purchase price. While balancing that taunt tension, Cold Steel II also needs a narrative pay-off and the ability to set things up for its successor. By virtue of design, the odds are against developer Nihon Falcom. 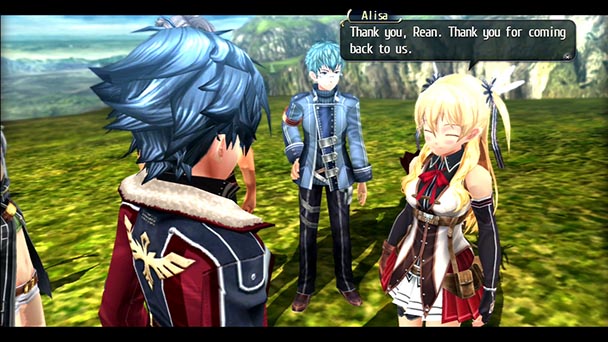 But miraculously, Trails of Cold Steel II largely transcends any mid-point muddle. Structurally, the gratification from observing the uneasy formation of Class VII is diminished. Tension between Thors Military Academy aristocrats and working classes set up some provocative rivalries in the first game, and the payoff was seeing the class gradually unite and let go of their prejudices, all as a growing civil war loomed. Cold Steel II opens a month after the finale of its predecessor as protagonist Rean Schwarzer rounds up the scattered members of Class VII, effortlessly stoking the smoldering flames of nostalgia for returning Legend of Heroes players and allowing a few of Class VII’s lingering divergences to be put to rest.

While the grand narrative tackles the taunt geopolitical situations that are common to the role-playing genre, fulfillment stems from finding old friends, making a few new acquaintances, as Rean picks himself up, before gathering the troupe, and lamenting the changes that have affected Erebonia. Although Cold Steel II extends a sepia-tinged summary of the main events on the first game, trying to recap every relationship, incident, and disagreement is near impossible. With so much of Cold Steel II’s journey grounded in the relationships and events of the first game, completion of Cold Steel is a near requisite. As a benefit for returning players, a bonus item is bestowed when a save game is found. So if you’re thinking about picking this up without having finished the first game, know that the game’s conquests and poignant moments won’t be as moving unless you’re taken Cold Steel to completion. 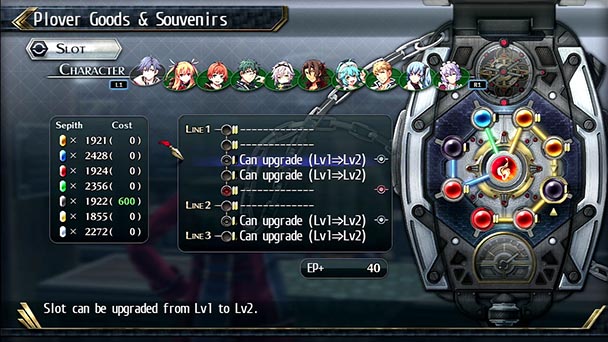 One constant across the Kiseki games are the use of NPC dialog to assist with the world building. While some impatient players might find the game a bit too loquacious, there’s good reason for the enormous amount of dialog: it helps craft one of the richest realms in all of role-playing. Here, even tertiary characters are endowed with multiple things to say. Taken collectively, each bit of conversation helps to weave a lush social tapestry, that’s the equivalent of pages of written exposition. And save for the occasional uncharacteristically pervy comment, it’s all incredible immersive.

While a number of publishers treat localization like an inconsequential task, it’s clear that XSEED feels different. Two of the editors I spoke with at E3 were remarkably committed to ensuring that the recent Kiseki games received the treatment they rightfully deserved, sacrificing physical and mental wellness in the process. Thankfully, the efforts paid off, with Trails of Cold Steel adeptly balancing faithful translation with dialog that feels alive and helps to delineate each character just as much as the series’ visual design. 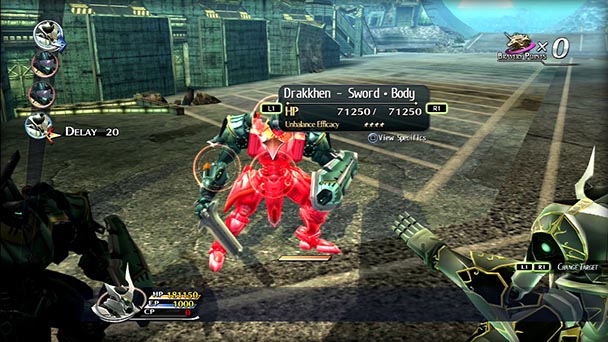 Fundamentally, Cold Steel II’s turn-based battles play out much like the first game, as a quartet of friendlies take on groups of foes via a combat system that’s nimble and offers enough nuance to maintain player interest. At the heart of the system is the game’s interpretation of Shin Megami Tensei’s social linking, permitting protagonists to intensify their level of comradery. The more time you invest in interpersonal bonds, the more battle options you’ll earn, bestowing a pleasing sense of progression extending everything from linked attacks to a free strike by a comrade when weapon affinity matches enemy weakness. But this time out, a few additions help to add even more variety when fighting.

While the Final Fantasy 7-like Quartz system remains relatively unchanged, the integration of Lost Arts encourages parties to defeat some of the noncompulsory foes scattered around the game world. By slaying one of these foes, players can come into possession of a gem which allows for a devastating, potentially momentum-reversing actions that can be used once per battle. Gradually, battle activity fills Cold Steel II’s new Overdrive gauge is another welcome assist, allowing for a trio of overwhelming critical strikes from linked members without any worry of casting time. 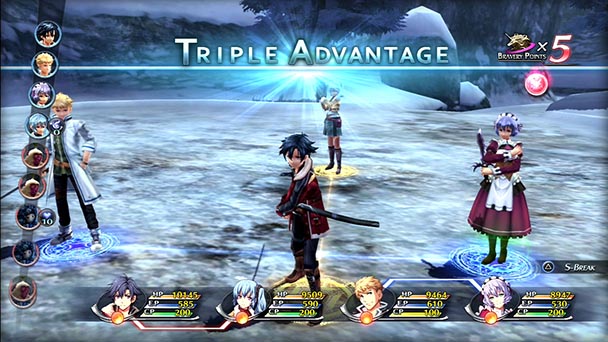 Whereas Cold Steel teased taking the helm of Divine Knight Valimar, but now players will spend an increasing amount of time piloting the machine. Regrettably, the new battle system is a bit simplistic, with players targeting either the head, arms, or torso of enemies- with the resilience of each area revealed by a star-ranking system. The one upside is Cold Steel’s allowance of secondaries, who can support Rean and Valimar with character specific strikes known as EX Arts that are capable of inducing status effects or even healing the Ashen Knight.

Another slight disappointment is found in Trails of Cold Steel II’s performance. Although the first game exhibited a few framerate woes, they’re more common here. Sporadic and not too debilitating on the PlayStation 3, they’re quite noticeable on the PS Vita. Platform parity also is broken with the title’s load times, with the console version experiencing reasonable five second interruptions but the portable having pauses three or four times as long. The game’s voice work could potentially be a sticking point for JRPG aficionados. Like the Japanese version, dialog is voice is some parts and missing in others, making for an inconsistent experience. Then there’s the issue of English dubbing- while the cast is competent, it’s disappointing that something couldn’t we worked out to include the original, Japanese voice acting. 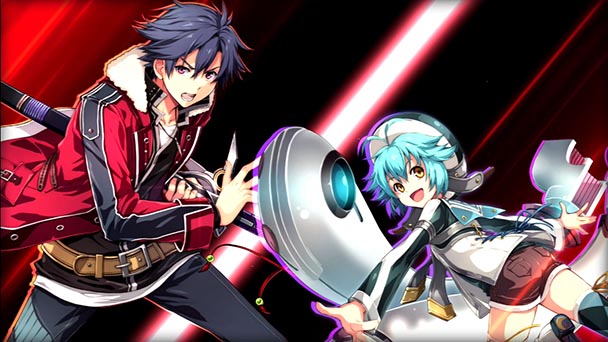 Small aesthetic quibbles aside, The Legend of Heroes: Trails of Cold Steel II is easily one of the best role-playing experiences of the year. Largely overcoming the obstacles that confront games situated in the middle of series, developer Nihon Falcom understands what made the first entry successful and builds on those foundations for the follow-up. Fans who lament about the genre’s golden age should not miss this oft-poignant, perpetually pleasing series.

Trails of Cold Steel II was played on the PlayStation 3 with review code
provided by the publisher. PS Vita version was played and purchased at retail

Summary : : Once again Nihon Falcom demonstrate they are one of the best in the business, delivering a worthy successor to one of PlayStation’s best role-playing games. Like the first two entries in the Suikoden series, Cold Steel is poised to be a property that you’ll want to experience every few years.