The Legend of Heroes: Trails in the Sky the 3rd review 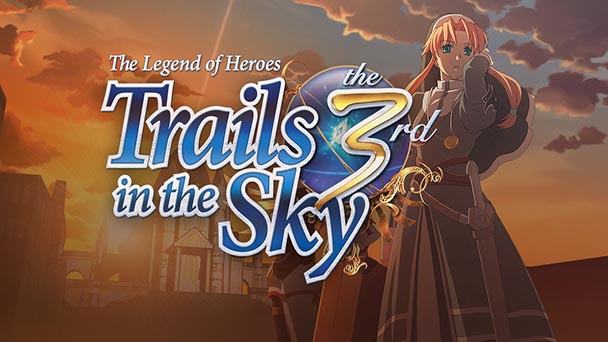 Sequels are often precarious endeavors. Stick too close to predecessor, failing to provide enough innovation or narrative-based consequence, and you’ll likely get labeled as an uninspired cash-in. Yet, if follow-ups are too revolutionary, and neglect to include the constituents that produced popularity, they can bomb just as easily.  Even if a publisher is lucky enough to nurture a prolific property, there’s also the struggle to push back against the law of diminishing returns, with each successive iteration risking the bond with its fanbase.

But largely, Tachikawa, Tokyo-based Nihon Falcom has ingeniously evaded the ebb of critical and commercial popularity, in both the Ys and The Legend of Heroes franchises. Born as a spin-off of Yoshio Kiya’s loosely-linked Dragon Slayer series, the latter made its debut in 1989, with Dragon Slayer: The Legend of Heroes bringing turn-based battles to Japanese PC-88 owners. In the states, however, the series got off to a discouraging start, with entries offering substandard localizations and released out of sequential order.

Please note: this review discusses some elements of Trails in the Sky the 3rd which might spoil the experience. 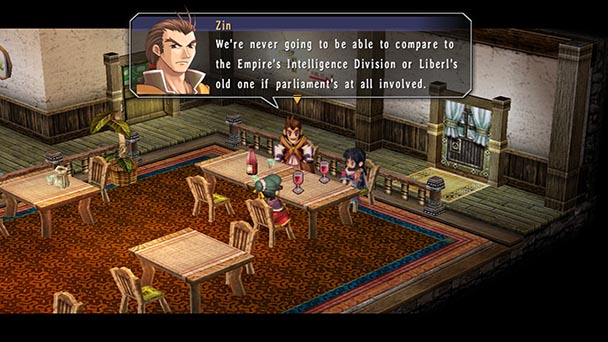 But when XSEED labored to bring The Legend of Heroes: Trails in the Sky, the sixth game in the series, Falcom’s franchise finally had an opportunity to soar.  Rooted in classic role-playing formula and offering one of the most appealing combat systems around, Trails in the Sky was also bolstered by its epic script. Exceeding 1.5 million characters in length, the writing endowed the game with a verbosity that few RPGs could even attempt to match. While the game’s visual output might have recalled the style of a previous hardware generation, the dialog was purely next-gen, extending a new benchmark in exposition.

Released four years later, The Legend of Heroes: Trails in the Sky Second Chapter offered a direct sequel, with a plotline picking right up from its antecedent. Like The First Chapter, the title continued its rich dialog, but more importantly elevated the already adept characterization. This time revealing a heartwarming sense of growth by key cast members. Shirking the customary PSP/PS Vita release of earlier entries, the PC-based Trails in the Sky the 3rd takes some radical design risks. Shifting its leads to secondary status and offering a trek that provides a sense of closure, the game delves into the psyche of one of the series’ more interesting protagonists. While it’s an obligatory experience for veterans of the first two Trails in the Sky titles, those with a newfound interest in the game are strongly encouraged to visit the original games before starting here. Mechanically, there’s nothing to bar Trails in the Sky the 3rd from newcomers, but they may overlook what makes the final outing feel so exceptional. 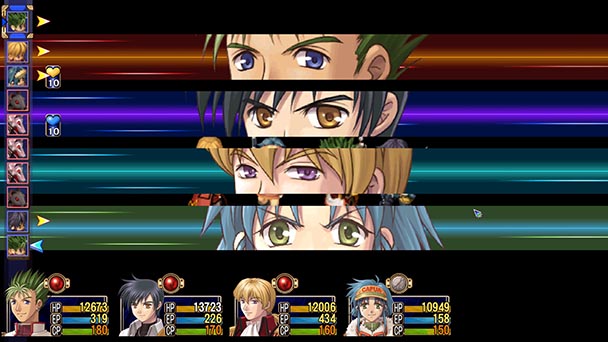 Pleasingly, Trails in the Sky the 3rd’s prologue is swiftly paced, detailing Father Kevin Graham’s plot to liberate an enigmatic relic aboard a swanky airship. With a masquerade ball in the backdrop and a steady succession of ham-fisted guards in dogged pursuit, the preface mimics the feel of a spy thriller, foreshadowing the onset of a grand adventure led by powerful protagonists. Following the assignment, Graham receives orders to liberate another artifact from the sunken remains of the Liberl Ark- the craft that served as Second Chapter’s concluding dungeon. Accompanied by his childhood friend, Ries Argent, the duo are pulled into a strange dimension called Phantasma, which is able to pluck many of Father Graham’s other associates, setting the stage for an unconventional adventure.

Largely, the rest of Trails in the Sky the 3rd’s plotline takes a radical shift from the first two chapters’ style of storytelling, which is why this isn’t billed as the ‘Third Chapter’. Which this entry certainly has a story to tell, it also focuses on sending players on dungeon crawl that might remind players of Joseph Conrad’s Heart of Darkness. Without venturing into spoiler territory, Kevin Graham isn’t your typical role-playing protagonist, with motivations, methods and diverge from the plucky, altruistic, and naive young adventurer common to JRPGs. Stick with it and you’ll see the 3rd further deviate from convention, with a concluding side-mission that ventures into some surprisingly dark territory. 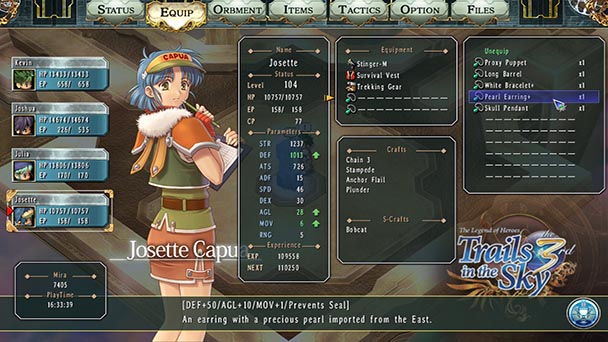 Functionally, there are two constituents to Trails in the Sky the 3rd, one detailing Father Graham’s backstory and other focused on the metaphysical doorways that dot the lone locale of Phantasma. Collectively, they refuse the duplicate the buoyant adventures that sent players careening across the Liberl Kingdom and the journey of Estelle and Joshua Bright to come Bracers. Although the two are present in 3rd, here they are secondaries- part of the sixteen-character roster that reveals the past, present, and future, of the Kiseki mythos.

During the expedition through Phantasma, doorways you encounter aren’t always readily open, with most requiring specific conditions met before they can be accessed. Once players are able to venture past these gates, Trails in the Sky the 3rd does some interesting things, offering an assortment of different excursions that range from mini-games to the discovery of unseen occurrences. The latter will be especially salient for Kiseki veterans, extending elucidation on events that happened between chapters, and well as nostalgia-inducing expeditions of earlier events. Given Trails in the Sky’s dense lore and substantial characterization, it’s gratifying when the game goes back and time, augmenting its already prodigious world-building. 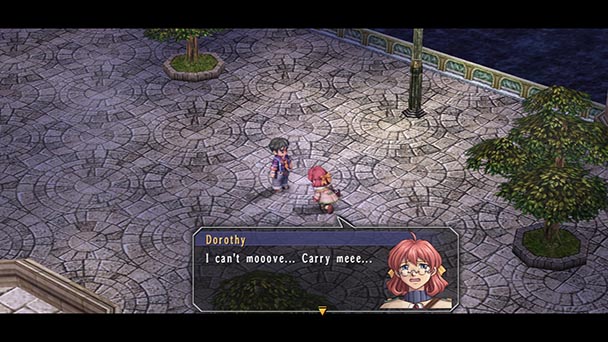 If there’s an obvious downside, it’s found in 3rd’s recycling of visual assets. While the journey through Phantasma would have been enriched by new art, expect to see many of the same sprites and backdrops from the first two chapters. Additionally, players will be asked to confront familiar enemies, padding gameplay with battles found across the first two chapters. While both of these design decisions are poised to induce a bit of tedium, the title occasionally tried to offset this, but providing protagonists in their leveled-up states. Few will find issue with the game’s soundtrack, with Falcom’s sound team offering a wealth of memorable melodies bound to send players on a quest to secure the soundtrack.

The Legend of Heroes: Trails in the Sky the 3rd represents a fairly radical departure from the treks extended by the first two chapters. But given that the sub-series has some of the richest character development around, the risk works. While the anthology might have seemed hackneyed for less properties, Falcom’s verbosity has crafted a world rich with intrigue and earnest emotion. Just make sure you’ve completed the previous two game before venturing into the 3rd. 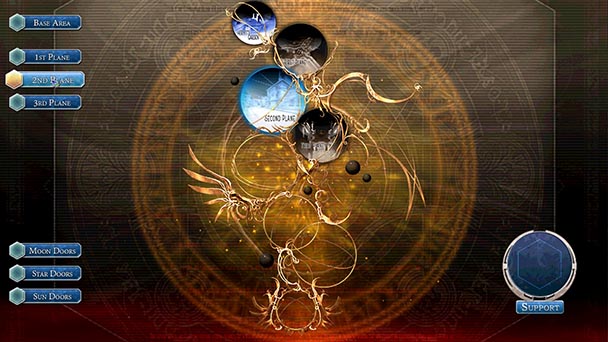 The Legend of Heroes: Trails in the Sky the 3rd was played on PC with review code provided by the publisher.

The Legend of Heroes: Trails in the Sky the 3rd
Platform: PC
Developer: Nihon Falcom
Publisher: XSEED, Marvelous USA
Release date: May 3rd, 2017 (US)
Price: $26.99 via Steam through May 10th, $29.99 thereafter
The Legend of Heroes: Trails in the Sky the 3rd review
Sequels are often precarious endeavors. Stick too close to predecessor, failing to provide enough innovation or narrative-based consequence, and you&rsquo;ll likely get labeled as an uninspired cash-in. Yet, if follow-ups are too revolutionary, and neglect to include the constituents that produced popularity, they can bomb just as easily.&nbsp; Even if a publisher is lucky enough to nurture a prolific property, there&rsquo;s also the struggle to push back against the law of diminishing returns, with each successive iteration risking the bond with its fanbase. But largely, Tachikawa, Tokyo-based Nihon Falcom has ingeniously evaded the ebb of critical and commercial popularity, in&hellip;

Summary : With an inspired combat system and writing that rose the role-playing bar, Trails in the Sky’ two chapters represented one of the genre’s best experiences. The 3rd takes risks, but still delivers a fitting coda destined to delight Kiseki fans.