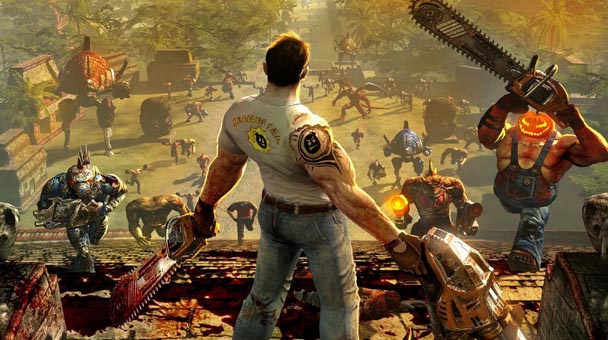 Ex-Bungie designer Jaime Griesemer once explained Halo: Combat Evolved as “thirty seconds of fun that happened over and over again”. In essence, the design philosophy centered around building a rock-solid game mechanic that could be contextualized- varying environments, weapons, and enemies to sustain interest. That said, Halo wasn’t the first first-person shooter to employ this stratagem, with Serious Sam: The First Encounter beating Bungie to market by eight months. Throughout the history of the Croteam-developed franchise, players faced a single, reoccurring scenario: using enormous weaponry to subdue scores of encroaching foes. Unlike successive FPS’s, Serious Sam wasn’t concerned with nuances like a cover system or regenerating health. Instead, the series focused on a lightning-quick engine which traded tactics for lengthy draw distances and jittery, controller-clinching excitement.

The recent release of the Serious Sam Collection for the Xbox 360 unifies four of the franchise’s titles onto a single-disk anthology. From Serious Sam HD: The First Encounter (TFE) and The Second Encounter‘s (TSE) high-definition reconstructions of the original two Sam titles, prequel Before First Encounter (BFE), maniac 2D side scroller Double D XXL, as well as the Jewel of the Nile DLC, the compilation offers the definitive compilation of Croteam’s console ports. While the disk can’t compare to the complexity or refinement of most contemporary first-person shooters, the compendium does offer twenty hours’ worth of single-player campaigns as well as an assemblage of competitive modes. The sole sticking point is that the price of the collection doesn’t offer much of an incentive over the purchase of full-priced digital versions. In fact, all of the Serious Sam Collection’s content went on sale last May- offering a considerable savings over the price of this anthology. 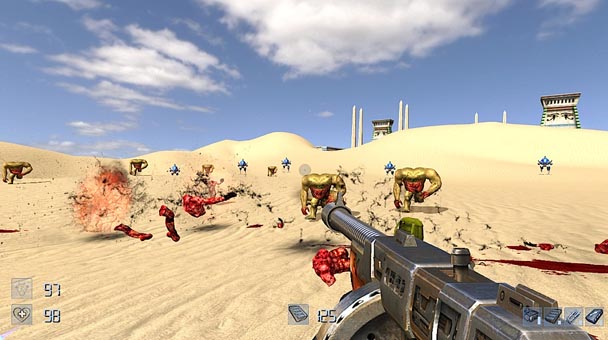 For collector’s hoping for presentational supplements, The Serious Sam Collection doesn’t make an encouraging first impression, exhibiting a primary game selection screen that resembles a menu of a budget DVD release. Shifting between episodes isn’t handled well, with gamers being forced to the dashboard to change installments. Notably absent from the collection is any type of ‘behind the scenes’ accompaniments such as interviews or concept art. As such, the anthology offers no additional content than what’s currently available for download on Xbox Live, which feels like a missed opportunity for a popular franchise with a twelve year legacy.

Vaulting into The First Encounter divulges the age of the source material. Although the remake exhibits a peppy refresh rate, getting close to enemies or environmental details divulges prominent pixelization. Yet, after a few minutes, graphical deficiencies become less conspicuous, as players are forced to focus on the game’s incessant onslaught of enemies and projectiles. Enigmatically, adversary AI is rudimentary, yet when Serious Sam throws several types of foes at players, containing the ambush is consistently engaging. 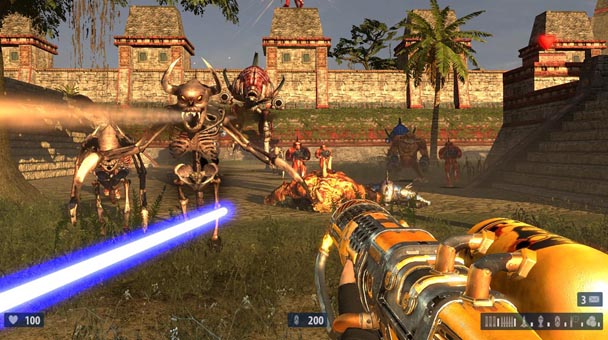 The Second Encounter augments the original game’s Egyptian settings with South American, Persian, and medieval motifs as well as several new weapons such as the chainsaw, sniper rifle, and flamethrower. Perceptibly, the episode’s visuals are more detailed over its predecessor, with fields of flora and more elaborate architecture. Regretfully, these improvements come at a price- with both visual and aural glitches present throughout the solo and cooperative campaigns. For players seeking to challenge online rivals, The Second Encounter does provide a variety of play modes ranging from Deathmatch, Capture the Flag, Beat Hunt, and Last Man Standing variants. However, online servers are largely vacant, with only a smattering of players spread across each type of competition.

Both an increase in visual fidelity and quantity of hiccups can be found in Before First Encounter. Here, Serious Sam acclimates to FPS norms, offering superfluous mechanics like iron sighting, an emphasis on melee attacks, and the ability to crouch. One of the most notable deviations in BFE is the dearth of hectic confrontations against swarms of enemies. Instead, the game favors tense exploration punctuated by the sporadic cluster of opponents. In retrospect, the alteration isn’t successful, with Before First Encounter playing like scores of other shooters, only with additional blemishes such as split second hiccups and disappearing graphical assets. 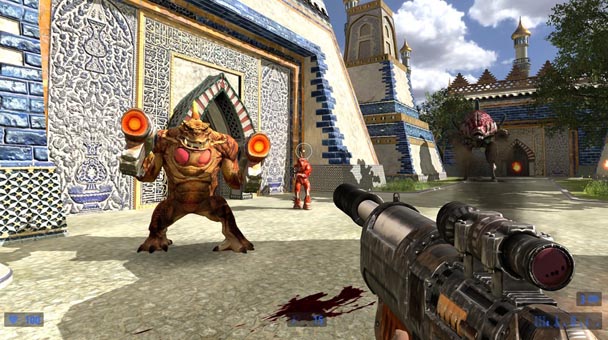 Undeniably, the standout of the collection is Double D XXL, a title which faultlessly reimagines the Serious Sam series as a twin-stick shooter/platforming hybrid. Drawing inspiration from other classic 2D run-and-gun titles like Gunstar Heroes and Alien Soldier, the title’s contribution to the genre is found in the Gunstacker, a tool which allows players to create their own, multi-weapon loadouts. As with previous efforts from Mommy’s Best Games, the game is energized by spectacle. One notable sequence has players escaping an abyss by creating a ladder of enemy carcasses while foes as jet-pack exploiting chimps and bomb-toting robot seductresses abound.

While The Serious Sam Collection’s four games and DLC offer enough value to justify its forty dollar price, it would have been comforting to see publisher Maximum Games offer additional incentive. Either dropping the MSPR to match the price of previous sales or including archival supplements would have been a courteous gesture. As it stands, Serious stalwarts will likely already own much of the collection’s content, while casual admirers might need a bit more enticement. For the latter group, demoing Serious Sam HD: The First Encounter along with Serious Sam: Double D XXL would be recommended before committing to this anthology. 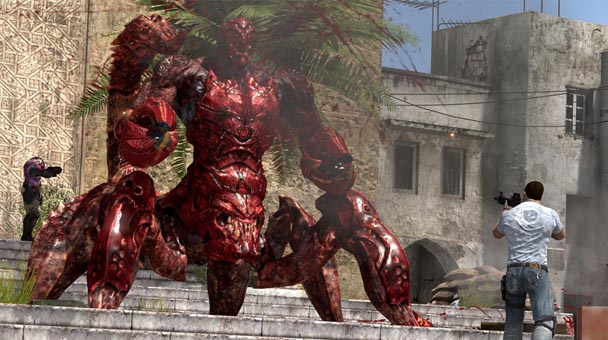 The Serious Sam Collection Review
Ex-Bungie designer Jaime Griesemer once explained Halo: Combat Evolved as &ldquo;thirty seconds of fun that happened over and over again&rdquo;. In essence, the design philosophy centered around building a rock-solid game mechanic that could be contextualized- varying environments, weapons, and enemies to sustain interest. That said, Halo wasn&rsquo;t the first first-person shooter to employ this stratagem, with Serious Sam: The First Encounter beating Bungie to market by eight months. Throughout the history of the Croteam-developed franchise, players faced a single, reoccurring scenario: using enormous weaponry to subdue scores of encroaching foes. Unlike successive FPS&rsquo;s, Serious Sam wasn&rsquo;t concerned with nuances&hellip;

Summary : A duo of two wonderfully frantic (along with one milder) first-person shooters, an exemplary run-and gun, and DLC summarize the console exploits of Sam “Serious” Stone.