The Lord of the Rings: War in the North Review 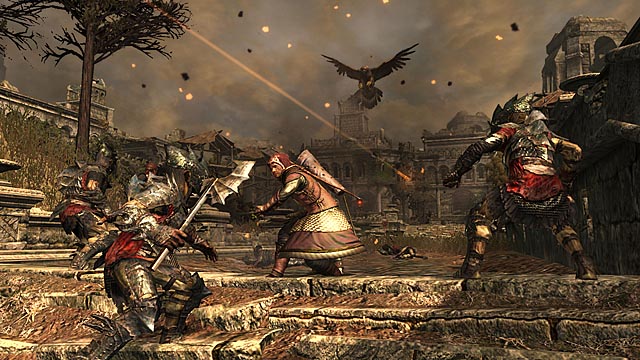 Last generation, Snowblind Studios’ Baldur’s Gate: Dark Alliance, Champions of Norrath and Champions: Return to Arms were the unrivaled monarchs of the console action/RPG realm. Each game was elevated by a bounty of stat-boosting loot, a clear-cut combat system, and in the case of the latter two titles- the ability to pillage with a quartet of online players. When news spread that the developer’s next title was built around The Lord of the Rings property, expectations rose like the searing flames of Orodruin.

Given the functional (albeit unmemorable) interpretations of Middle-earth conflict delivered by the now-defunct Stormfront and Pandemic Studios, crafting the consummate console version of Tolkien’s opus was certainly a conceivable task. While recent Xbox 360, PlayStation 3, and PC release The Lord of the Rings: War in the North doesn’t quite trounce Snowblind’s previous accomplishments, the title offers enough high-fantasy themed action to warrant a purchase from any player hoping to quash Sauron’s mounting regime. 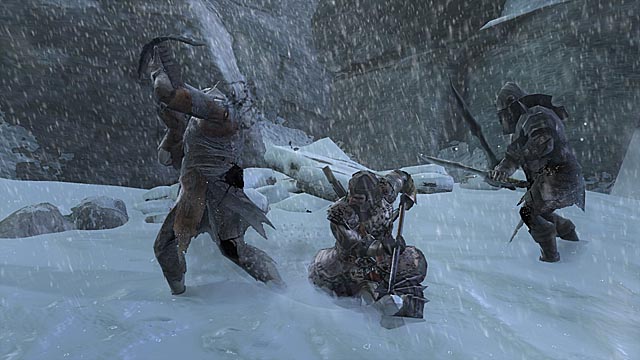 Mirroring Gandalf and Aragorn’s plot at the Black Gate to divert attention away from Frodo’s pilgrimage, War in the North delivers a canonical storyline where a trio of adventures employ a similar tactic to distract Sauron’s Chief Lieutenant, Agandaur. Players assume the role of Eradan the Dunedian ranger, Andriel the Elven loremaster or Farin the Dwarven champion- who despite their differences in physical appearance and combat proficiency, are each armed with a formidable set of melee and ranged skills. This similarity in offensive skill isn’t accidental, as players aren’t given the ability to switch control of characters mid-stage. So whether players prefer killing orcs with a crossbow, two-handed-sword, or staff bolts, none of the adventurers are inept push-overs. Any characters not helmed by either split screen or online co-operative partners are managed by the game’s AI. Satisfyingly, your CPU-controller companions are habitually autonomous, exhibiting the ability to tackle the most imperative foe or the perception to resuscitate a downed player. Although a press on the directional pad can issue a simple attack or defend command, directives are rarely need. Exception can be found when the sporadic ballista needs to be commandeered, where duty falls squarely on the player’s shoulders.

Beyond your compatriots, Beleram, The Giant Eagle offers additional support. From vanquishing turret operators, demolishing structures, to hoping on a troll’s back with clenched talons, the behemoth bird is both a powerful asset and likable character. Dialog-tree driven exchanges with War in the North’s NPC aren’t quite as engaging, as the conversations can be verbose and have little impact on the game’s storyline or the moral orientation of your character. 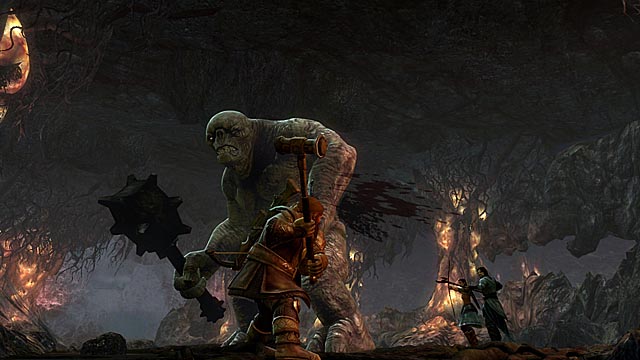 Following action/RPG convention, slaughtering every troll, spider, uruk-hai and undead creature disburses experience, allowing players to cultivate a distinct character. With three separate tech-trees for each protagonist, options are plentiful. Eradan, for example, has separate abilities in the areas of stealth, sword and bow combat. With augmentations ranging from evasion capabilities to increasing the strength and probability of critical strikes, these powers help offset the occasional tedium of combat. With the simultaneous increase of offensive stats and beast resilience, the number of hit points shaved from each monster strike increases- but combat doesn’t change radically. Predictable enemy AI and a limited number of enemy types also contribute to the repetitive nature of War in the North’s battles. Fortunately, skirmishes are rendered with a visceral tenor, with players slicing off appendages with feverish rage, spilling rivers of onyx-shaded orc blood in the process.

Drawing inspiration from both Peter Jackson’s trilogy as well as the Tolkien’s tomes, the title’s protagonists, enemies and locals are pleasingly rendered and proficiently animated, providing a majestic interpretation of Middle-earth. Consistently, outdoor locations reveal ethereal sky textures while interiors portray torch-lit chambers comprised of craggy bricks. Although the source material doesn’t permit the eccentric arsenals found in other fantasy brawlers, each separate armor, shield, gauntlet, single and dual-wielded weapon appears on the character models. Details such as seeing the remaining number of arrows in Eradan’s quiver are undeniably pleasing- even if they are offset by an aim animation which shows a notched projectile when the player has none left. Even with a multiple of opponents onscreen and three online partners, War in the North’s framerate remains consistently fluid. Sonically, the title’s impassioned orchestral soundtrack adeptly complements the on-screen skirmishes, but is sullied by repetitive player voices. 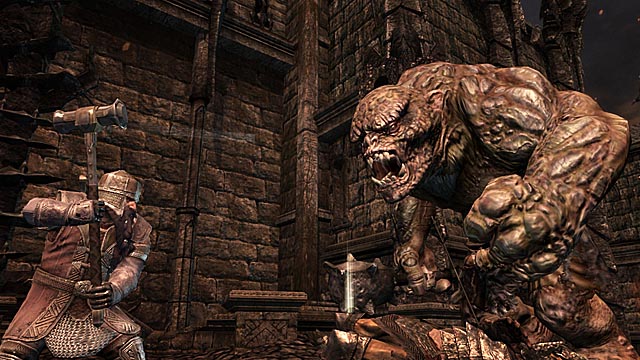 Snowblind Studios’ previous works have demonstrated success in the action/role-playing genre. Yet, with The Lord of the Rings: War in the North, the developers seem slightly stifled by an obligation to the source material. From the quizzically vacant towns of Bree and Rivendall, nearly-indiscernible storefronts located amidst castle halls, and dialog options which have little effect on the plotline, it’s clear that Snowblind was challenged by contextualizing Tolkien into a now-gen hack and slash game. Despite these minor woes, War in the North has enough loot and lore to ensure a rousing, good time for Middle-earth devotees.

Previous: Kirby’s Return to Dream Land Review
Next: New Releases for the Week of November 6th, 2011