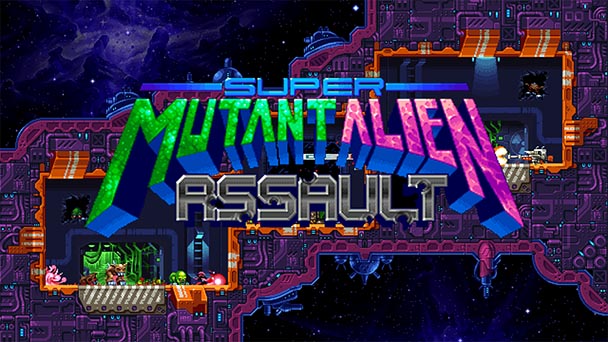 Progress, as the old adage states, doesn’t take place in a vacuum. Impressionism wasn’t the innovation of a single painter, but a group of interconnected artists riffing off each other’s techniques and styles, gradually advancing the art. This same evolutionary process is also demonstrated by Super Mutant Alien Assault, a title with mechanics that can be traced all the way back to the 1983 release of Shigeru Miyamoto and Gunpei Yokoi’s Mario Bros. arcade cabinet.

Following a developmental trajectory that includes both a Flash game and an Early Access title on Steam, Super Mutant Alien Assault has made its way onto the PlayStation 4. While it’s hardly the modern-day equivalent of Monet, Manet, or Renoir, and borders on hyperbole for being the self-proclaimed “Citizen Kane of Super Crate Box clones”, it is certainly enjoyable in diminutive doses. But a lack of substantial innovation means that the title probably won’t be exhibited in an urbane video game museum one day. 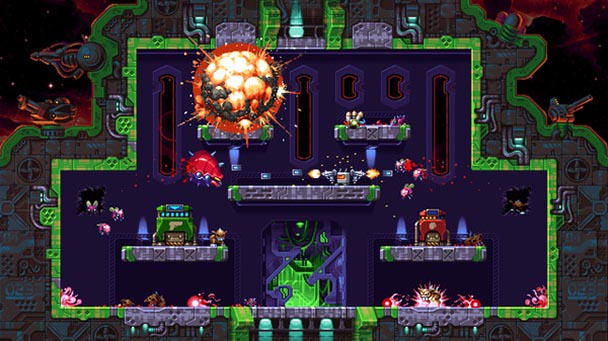 Like both Mario Bros. and Super Crate Box, each of the game’s stages is a claustrophobically small, confined to fit on a single, non-scrolling television screen. The decision behind this is clear- with the developers wanting to keep the action unremitting, as players jump and shoot at each level’s barrage of encroaching enemies. Completing the tenseness is a dub-step soundtrack that grows from intensity from a minor din to a beat drop and stuttering techno-wail that wouldn’t be out of place on a Skrillex EP.

While the piercing soundtrack won’t have universal appeal, it does help to convey urgency. In all levels, dawdling proves deadly, with pulse waves transforming ordinary aliens to fast, hyper-aggressive foes, reminiscent of the incensed green Sidesteppers in Mario Bros. In Survival-based rounds, merely eliminating all antagonists will push players toward the next stage. But variations like Hyperdrive requires players to transport fuel drums from one side of the playfield to the other, all while eliminating the ever-growing procession of enemies. 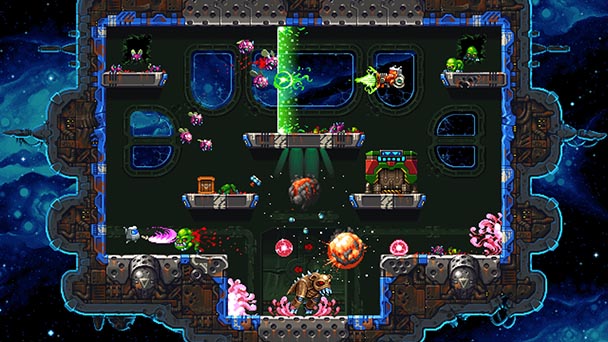 Still another variation has players releasing pressure from valves poised to burst. Don’t get there in time, and you’ll automatically take damage. Ever fourth stage is punctuated by a boss battle. Given the speed and resilience of these foes, they are Super Mutant Alien Assault’s toughest challenge. Quite often you’ll arrive at the encounter with an untouched health bar only to see it whittled away by a fuming foe who is bounding around the screen with tempestuous fury.

Fortunately, an ample arsenal of weapons helps to balance the opposition. At first, you’ll encounter conventional weaponry, like shotguns, assault and sniper rifle, before progression unlocks more exotic, yet no less lethal tools, like an explosive pogo stick. To keep player from feeling too comfortable with any weapon, ammunition is limited, while armament stations extending a new randomized tool every half minute or so. In execution, some of the munitions are cool, but the many of the offensive items feel too much like Super Crate Box’s ordnances. 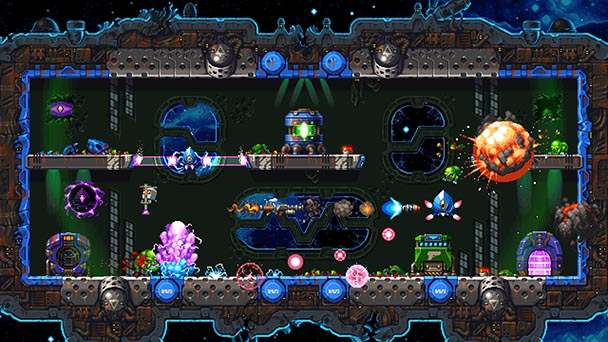 The slender difference is found in Vending machines which distribute explosives, but these aren’t quite as useful as your main weapons. Grenades have protracted delays before they detonate, leaving players prone for a few seconds. When they do explode they have a sizable blast radius and if you’re caught in it, you’ll lose health. Rounding out your toolset are backup arms like unlimited ammo pistols and well as navigation perks like a sprint and even a plasma blast ability that pushes away foes, damaging them in the process.

Those who wish additional assistance can bring a local partner in for the proceedings, although the game does scale the difficulty level accordingly. Unsurprisingly, a co-op session enlivens the title, with partners have to work in close coordination to push back the alien incursion. It’s enjoyable enough that the omission of any net-based teamwork is a notable transgression. Without even online leaderboards, Super Mutant Alien Assault feels like a sequestered experience. 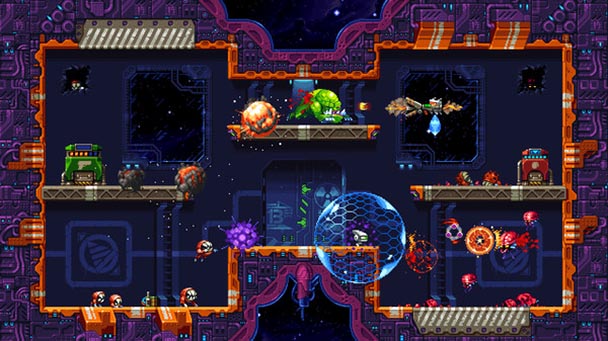 Visually, the game’s vibrant-hued, pixelated style is poised to remind players of the sixteen-bit era. But even if you’re not a fan of the retro-influenced style, you’ll probably appreciate the game signifier. The boundary of each environment as well as most monsters are rendered in eye-grabbing colors, making it easy to assess the whirlwind of on-screen activity. Credit should be given to the game’s controls, allowing leaps to be executed with pixel-perfect accuracy.

Perhaps Super Mutant Alien Assault greatest offense is that it’s a small evolutionary step which doesn’t demonstrate enough innovation from the gam’s that inspired it. As such, a game like Extreme Exorcism which follows the same blueprint, but adds enemies which duplicate your footsteps, feels like more of an advancement than a lateral offshoot. But if you haven’t mined every last once of enjoyment from Super Crate Box and Muffin Knight, killing aliens to raging dub step might provide a few afternoons of frantic fun.

Super Mutant Alien Assault was played on the PlayStation 4 with review code provided by the publisher.

Super Mutant Alien Assault
Platform: PlayStation 4, Xbox One, PC
Developer: Cybernate
Publisher: Surprise Attack
Release Date: July 12th, 2016
Price: $9.99 via PSN (PS4), XGS (Xbox One), or via Steam (PC)
Super Mutant Alien Assault review
Progress, as the old adage states, doesn&rsquo;t take place in a vacuum. Impressionism wasn&rsquo;t the innovation of a single painter, but a group of interconnected artists riffing off each other&rsquo;s techniques and styles, gradually advancing the art. This same evolutionary process is also demonstrated by Super Mutant Alien Assault, a title with mechanics that can be traced all the way back to the 1983 release of Shigeru Miyamoto and Gunpei Yokoi&rsquo;s Mario Bros. arcade cabinet. Following a developmental trajectory that includes both a Flash game and an Early Access title on Steam, Super Mutant Alien Assault has made its way&hellip;

Summary : Your enjoyment of Super Mutant Alien Assault hinges on not playing the games that inspired it. If you’re new to the single-screen jump and shoot give it a go.