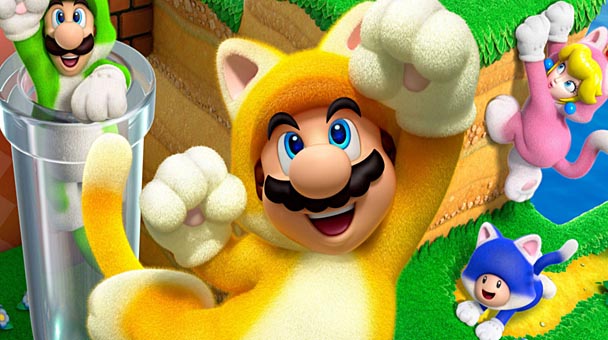 In an attempt to reinvigorate the market after the video game crash of the early ‘80s, Nintendo began exhibiting their then-unreleased Nintendo Entertainment System (or NES) across department stores in select cities such as New York, Chicago, Los Angeles, and San Francisco. Having witnessed one of these presentations, I recall the bulk of the demonstration being rather unimpressive. Sure, using the Zapper in Duck Hunt looked diverting, but the save for the cartoonish graphics, the game wasn’t all that innovative. Gamers had access to light gun-driven dedicated consoles like the Telstar Marksman for years. Even less impressive was the Robotic Operating Buddy- a device with a very limited functionality. In essence, R.O.B. would shift spinning tops which could open in-game gates in Gyromite. The general consensus seemed to find the device hard to control and largely unessential. The crowd started thinning.

Sensing the dwindling audience, the representatives played their ace in the hole- Super Mario Bros. While the game is now ubiquitous, with availability for most post-NES Nintendo systems transforming the title into an amalgam of platforming conventions, seeing the title for the first time was a revelation. Here was a game that didn’t need a verbose explanation or tutorial to explain its control scheme. Instead, Super Mario Bros. was deftly designed around the concept of experimentation and play, gently coaxing gamers to try new things through its capably crafted level design. Although the game had palpable objectives, it was also tempted players with a myriad of secrets, surprises, and oddities. After thirty-minutes of hands-on time with the Shigeru Miyamoto and Takashi Tezuka crafted masterpiece, nearly all the remaining spectators were ready to plunk down $250 just to play the game. Bearing the burden of R.O.B. seemed excusable when measured against a chance to climb that end-of-level flagpole. 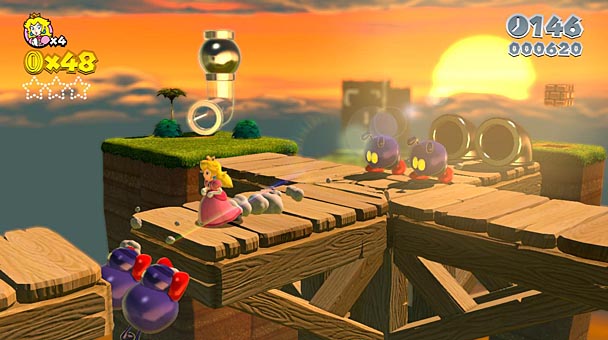 Over the years, Mario’s appearances have occasionally justified the purchase of hardware. 1990’s Super Mario World for the SNES offered an upsurge in playability, as gamers rode Yoshi through realms highlighted with Mode-7 enhanced visual effects. Super Mario 64 for the Nintendo 64 reshaped the series, reimagining the Mushroom Kingdom as a 3D space which favored open exploration over linear level progression. Although Wii U launch title New Super Mario Bros. U was a gallant effort, pushing the franchise into the HD sphere, it wasn’t quite adept enough to encourage a hardware purchase. With sporadic framerate drops, a few abridged animations, and gameplay which was a bit too similar to its predecessor, the title won’t be remembered as one of Mario’s finest outings. Conversely, the recent release of the fastidious polished and painstakingly constructed Super Mario 3D World is destined for a place in Nintendo’s platforming pantheon.

Undoubtedly, Nintendo EAD Team Toyko sought to unite the gameplay virtues which have propelled Mario through a nearly three-decade long history. Customary for the series, there’s a skeletal plot; an impetus which drives the action, without obligating the player to sit through superfluous cinematic sequences. This time, the target of reoccurring antagonist Bowser isn’t Princess Peach, but rather a group of fairy-like creatures called Sprixies, who end up in the Koopa King’s confines. Likewise, Super Mario 3D World follows tradition, largely shirking tutorials and on-screen prompts, allowing the game’s brilliant level design and the player’s natural sense of curiosity do the explanation. 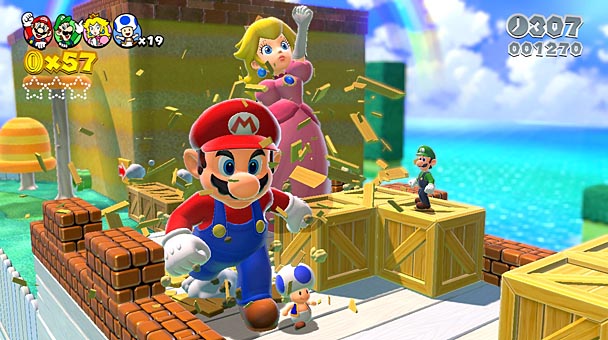 One of the best examples of this can be found in the game’s first stage, where players will inevitably stumble across the Cat Bell, a power-up which places the protagonist into an unbearably adorable feline suit. Using the traditional two-button input method, gamers are likely to discover the costume’s basic abilities, such as the capacity to claw at Goombas or pounce on enemies. Only though a bit of experimentation will players discover that they can also claw up the side of most walls- habitually granting access to clandestine alcoves and hidden areas. As such, the replay of stages is encouraged, as the acquisition of new traversal techniques subtly allows gamers to perceive new places for exploration.

Recalling Super Mario Bros. 2 quartet of protagonists, Super Mario 3D World offers players the ability to play as either Mario, Luigi, Peach, or Toad. Although the principal plumber offers a conventional movement set, each of the other characters have their own ability, from Luigi’s elevated jump, the Princesses’ hovering ability, and Toad’s speed and smaller hit box. Prolonging the series’ contemporary commitment to accommodate drop-in/drop-out play for up to four players- the game scales dexterously. Notably, two and three player games shaped into cooperative affairs, while adding a fourth person transformed the game into a competitive rivalry. Clearly, Nintendo has this possibility in mind. The participant with the highest level score is given a crown to wear. Wholly an intrinsic perk- it gives no advantage in play. Yet, offering the ability of rivals to steal and subsequently sport the coronet can produce a game within a game- just one example of design brilliance. 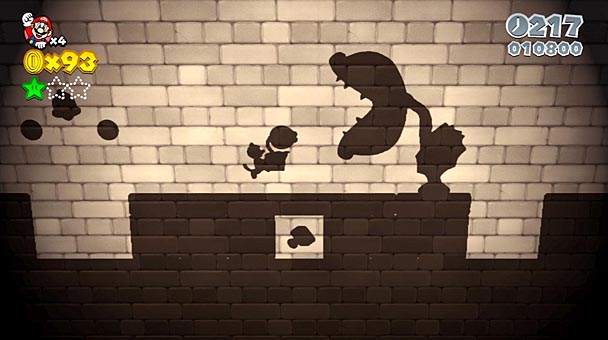 Occasionally, the journey across Super Mario 3D World’s multiple milieus is driven by comic relief as much as discovery. The game’s new Double Cherry power-up clones the player- and when multiple fruits are grabbed, soon players will be controlling an army of plumbers or princesses, turning stages into delightfully disordered, yet riotously humorous affairs. Masterfully, the Double Cherry is like many of Super Mario 3D World’s bits- used in thoughtful moderation. Habitually sequences, inventions, and gags are used once before being retired, making every moment of the twelve-to-fifteen hour journey feel distinctive. Occasionally, the game even dares to break convention, delivering delight by honoring deep-rooting desired, like finally putting Boos to permanent rest.

Nintendo’s efforts to eliminate difficulty spikes and demoralizing sequences should be commended. Not only does Super Mario 3D World carefully ratchet up the difficulty, ensuring players are prepared for the escalating level of challenge, they also place a few safeguards in. Like previous Mario titles, fail a stage too many time and you’ll be given the golden Tanooki suit, which give players invisibility as well as a lengthier jump. With this perk, even novices should be able to complete the game without experiencing the affliction of frustration. 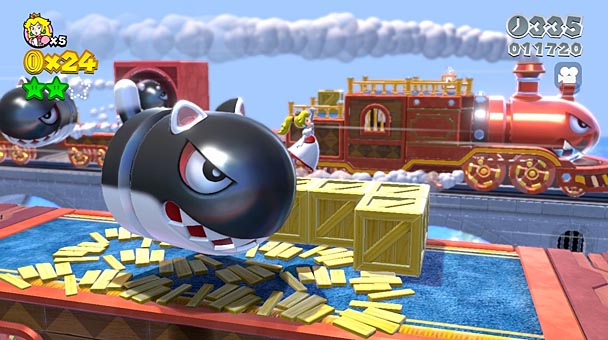 Aesthetically, Super Mario 3D World is nothing short of finely polished perfection. The jump to 1080p output wasn’t squandered on trying to fill the Uncanny Valley. Instead, stage materials have been given an organic ambiance, with textures allied to bricks, boxes, grasses, and rocks. Puffs of smoke explode cartoonishly and vanish in an eye-pleasing fashion, which glowing particles are hurled- all without any fluctuation to framerate. Sonically, the game’s soundtrack feels like it’s being performed by a live band- which is a nice change of pace from Galaxy’s ethereal, synth-driven score.

While those newly released consoles may trump the Wii U’s processing power and visual fidelity, there’s much more to a game than just polygons and hi-resolution textures. Essentially, Super Mario 3D World is one of the few games to make good on the promise of the next generation. It’s a title that’s both wonderfully impressive, graphically striking, and more importantly- a blissful experience during each minute of its protracted playtime and post campaign perks. If you’ve been waiting for a convincing reason to purchase Nintendo’s latest system, Super Mario 3D World is as persuasive as they come. 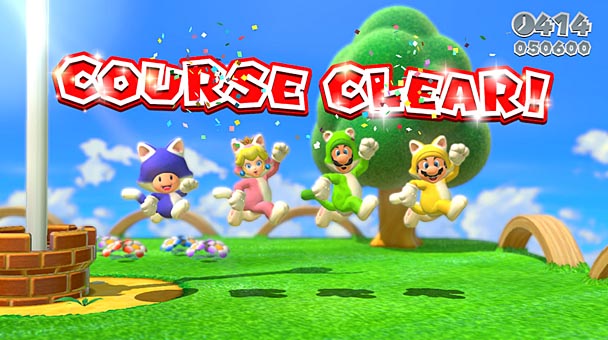 Super Mario 3D World Review
In an attempt to reinvigorate the market after the video game crash of the early &lsquo;80s, Nintendo began exhibiting their then-unreleased Nintendo Entertainment System (or NES) across department stores in select cities such as New York, Chicago, Los Angeles, and San Francisco. Having witnessed one of these presentations, I recall the bulk of the demonstration being rather unimpressive. Sure, using the Zapper in Duck Hunt looked diverting, but the save for the cartoonish graphics, the game wasn&rsquo;t all that innovative. Gamers had access to light gun-driven dedicated consoles like the Telstar Marksman for years. Even less impressive was the Robotic&hellip;

Summary : In 1981, Shigeru Miyamoto popularized the platformer with Donkey Kong. Thirty-two years later, he’s still innovating, as demonstrated by Super Mario 3D World- one of the most jubilant and enjoyable games in the genre’s history.