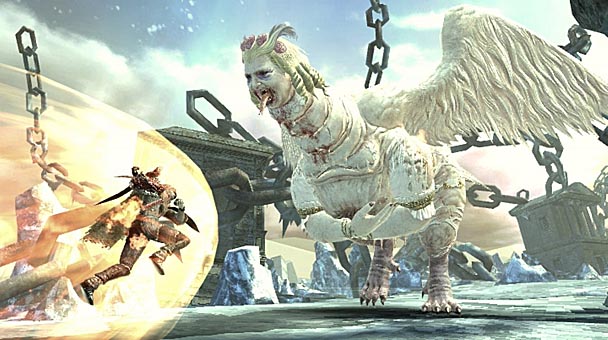 Serendipitously, the gameplay of the SCEA-published Soul Sacrifice can be read as a metaphor for the PS Vita. Mirroring the processing capabilities and sumptuous output of the portable’s OLED screen, the prospect of brandishing tremendous power is dangled in front of players. However, throughout the Keiji Inafune-conceived title, raw strength is unswervingly balanced by trade-off. Potential Vita purchasers face a similar dilemma: while owning a dominating piece of hardware can be exhilarating, waiting months between full-fledged, triple-A titles can be disconcerting.

The release of Soul Sacrifice isn’t quite the killer app capable of tipping the scales in favor of the potent portable. However, the title’s elegant presentation, engaging play mechanics, and unrelenting succession of thorny decisions make the game one of the platform’s leading exclusives. With the Comcept-developed title bestowing at least forty hours of absorbing play, players face only one compromise:  the journey hinges on a homogenous mission structure. 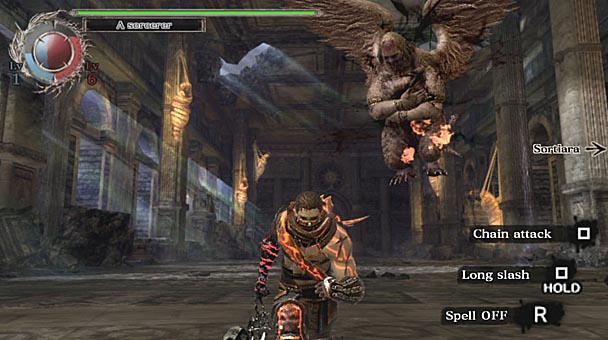 Naturally, Soul Sacrifice’s persistent cycle of combat, loot drops, and upgrades is bound to draw comparison to the Monster Hunter series. For better or worse, Capcom’s franchise relinquishes most narrative elements, allowing the game’s pursuit of self-actualization and prolonged combat sessions to do the bulk of the storytelling. Alternatively, Sacrifice provides a plotline filled with a roster of fascinating, often-tragic personalities. In execution, the technique is closer to expositional methods of traditional role-playing games, yet blessed with a refreshing appreciation of brevity. Don’t expect NPCs to blather on endlessly. Instead, terse writing and evocative voice acting establish the title’s melancholic tone.

Only slightly more verbose is Librom, a sentient tome who ingeniously acts as the game’s narrator, historian, and menu system. Sassy and sardonic, the book is at the core of Soul Sacrifice’s plot, chronicling the story of sorcerers who have attempted to defeat a malevolent necromancer named Magusar. While the title employs a scant number of cinematics to convey its parable, an opening animated sequence does reveal the plight of the last enchanter who tried to engage Magusar. Unsurprisingly, he ended up as a human sacrifice, foreshowing the game’s reoccurring motif of capitulation. Amusingly, players are allowed to confront the evil sorcerer at any time. Yet, without surrendering at least a work-week of leisure time, the confrontation will surely end in violent obliteration. 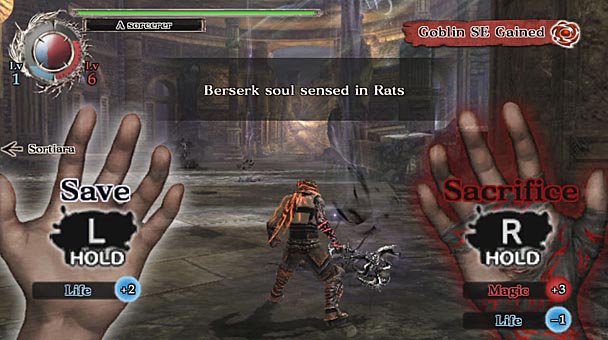 Instead, players will be conceding their time to the game’s missions, which fall into three basic categories: eliminating enemies, destroying bosses, and the sporadic collection errand. Travelling through derelict lands filled with crumbling statues, icy caverns, and territories filled with unruly flora, Sacrifice’s customizable character has a substantial arsenal at their disposal.  Three weapons, called Offerings, are mapped to the Vita’s face buttons, with a press of the right bumper allowing access to an additional trio of tools.

Soul Sacrifice’s combat is elevated by several notable elements. Even as the onset of the game, Offerings feel powerful and are gratifying to use. Although traditional melee and range-based attacks are present, more engaging are abilities such as mortar-like barrages, the capability to summon a golem, and even the ability to transform into a spinning boulder. Much of the title’s appeal stems from learning the timing, range, and allocation of each weapon. Factor in elemental strengths and weaknesses, ravaging combinations to be discovered, and the ability to upgrade your Offerings, and players will find a dazzling amount of nuances in combat. The downside is that enemies, even bosses are recycled, which can lead to a bit of tedium during the game’s waning hours. Also at fault is Librom, who neglects mentioning what kind of beasts each level holds. As such, it’s all too easy to enter a mission outfitted with the type of melee strikes that are inept again airborne baddies. 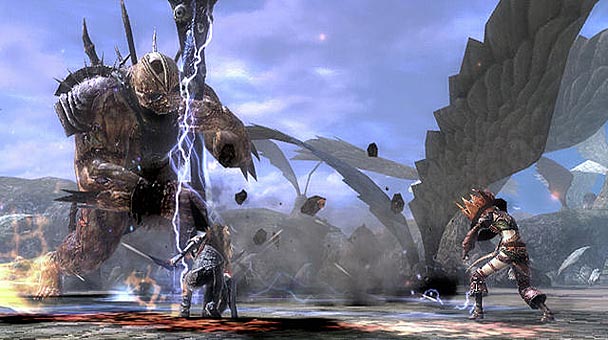 As the game’s moniker indicates, sacrifice plays a pivotal role, forcing players to make difficult decisions. Once a beast is defeated, players are given two options.  Saving a creature augments the protagonist’s defense, while choosing to slaughter the beast improves your sorcery skills. Although a player’s protective rating and magic abilities are tracked on two distinct leveling systems, the decision often affect both standings. When bosses are conquered the stakes are elevated even higher. Here, saving a soul can provide an AI assistant for side missions. Cunningly, if these supports succumb in battle, players may donate a bit of their heath to resurrect them. Or if players perish, they can ask the AI for revival. Determining whether high-ranking beasts live or die may also affect the trajectory of Soul Sacrifice’s story and draw the ire of a CPU companion, forcing them to leave.

Another poser faced by players is when to use the Black Rites. These abilities exact punishment on the protagonist’s body in exchange for an overpowering, momentum-turning assault. Summoning scorching flames to char beasts is a possibility, but the conflagration will also engulf gamers. Another instance allows players to summon searing eye lasers, but the main character will have to forfeit an eye to use this skill, subsequently limiting impairing the player’s perspective. Fortunately, corporal injury doesn’t have to be permanent- wiping Librom’s tears collects a currency which can repair the player’s body.  While this mechanic prohibits Soul Sacrifice from becoming too unfriendly, hardcore players will likely yearn for a mode with unyielding permanency. 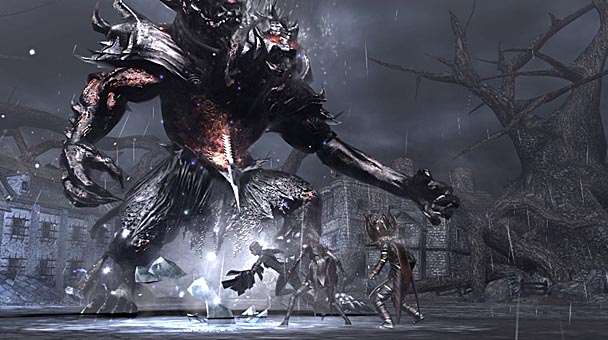 Soul Sacrifice scales seamlessly, allowing up to four sorcerers to battle beasts cooperatively via local or online play. Matchmaking options allows players to create their own room (with optional passwords), and well as regulate access to certain game mechanics. While the game employs party chat, player may also compose simple phrases via the in-game text bank. Arguably, the quality of the title’s multiplayer component is how ethical decisions are contextualized. It’s one thing to agree to give health to a downed AI drone, but it’s quite another to be a martyr- relinquishing your soul to offer one last, demoralizing attack against foes. Pleasingly, the afterlife entails more than just waiting for a restart; departed players use the touchscreen to augment allies or decrease the effectiveness of enemies.

Action games habitually gloss over ethical dilemmas, often focusing on the visceral. Soul Sacrifice feels fresh for forcing players to confront these quandaries, even if the decisions are based in a binary dichotomy. If players can look past repetitive mission structure, they’ll find that Sacrifice offers one of the most gratifying, long-tailed player experiences on the PS Vita. 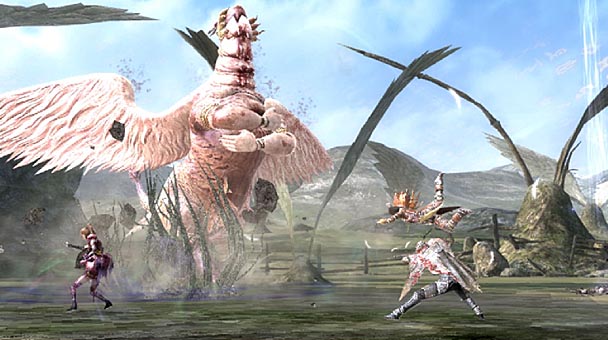 Soul Sacrifice Review
Serendipitously, the gameplay of the SCEA-published Soul Sacrifice can be read as a metaphor for the PS Vita. Mirroring the processing capabilities and sumptuous output of the portable&rsquo;s OLED screen, the prospect of brandishing tremendous power is dangled in front of players. However, throughout the Keiji Inafune-conceived title, raw strength is unswervingly balanced by trade-off. Potential Vita purchasers face a similar dilemma: while owning a dominating piece of hardware can be exhilarating, waiting months between full-fledged, triple-A titles can be disconcerting. The release of Soul Sacrifice isn&rsquo;t quite the killer app capable of tipping the scales in favor of the&hellip;

Summary : Yes, Soul Sacrifice shares a similar structure to Monster Hunter. But the game’s ethical dilemmas, formidable (and fun to use) weaponry, and storyline allow the Comcept-developed title to carve its own prodigious path.