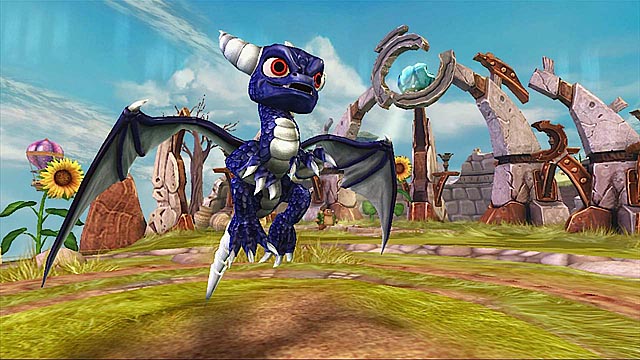 The old adage “birds of a feather, flock together” is a tragically accurate explanation of my social circle. Comprised of different ages, backgrounds, and cultures, each male friend finds their way into the clique by being imaginative, bookish, and owning an oversized assemblage of action figures, LEGOs, or plastic models.  In other words, they are the prototypical man-child. One recent movement which has swept through the group is an unconcealed interest in Toys For Bob’s (Pandamonium, the Star Control series) Skylanders: Spyro’s Adventure. While a perfectly capable youth game, the title also has an undeniable allure for a distinctly older demographic.

As a shrewd amalgam of dungeon crawl, figurine admiration, and social catalyst, Spyro’s Adventure has little in common with the fire-breather’s previous franchise entries. Considering the sharp decline in quality following Insomniac’s trilogy of Spyro titles, a fresh start might just have saved the dragon’s once-dignified reputation. However, players shouldn’t expect the scaly celebrity to be the focus of the game. In keeping with the collectable nature of the title, Spyro’s presence is no more pronounced than any other character. 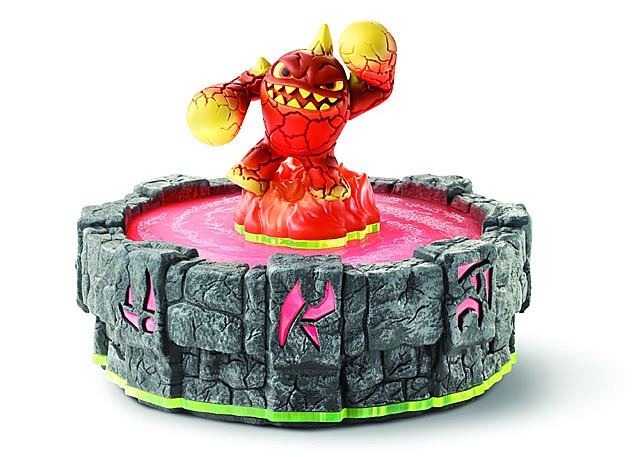 Clinging to the game’s toy-inspired roots, Spyro’s Adventure storyline is blissfully skeletal, placing players in the role of Portal Master- a revered role responsible for keeping any agents of darkness at bay. With heroes and a villain crafted from Saturday morning trope, characteristics of the cast can be gleaned from physical appearance. Resident basket-case Trigger Happy boasts a dangling tongue and twin pistols held frantically skyward while Eruptor’s brutish hands and mischievous grin reveal his primal demeanor. Essentially, the developers seized the formula for any successful toy line- creating a roster of colorful, contrasting, and quickly comprehended personalities.

Beyond the trio of figures which come bundled with the starter pack, players also receive the game, as well as the Portal of Power- an illuminated platform which serves as an interface between the on-screen world and the statuettes. Placing any one of the Skylanders on the stand transmits information into the game, articulating not only which character is on the base, but also each hero’s swelling set of stats. Stylishly, each figurine is capable of storing data, recording a creature’s status as well as an increasing inventory of offensive capabilities. Players are able to bring their Skylanders over to a friend’s house and- regardless of platform, instantly import their cultivated character into a cooperative match or friendly battle. 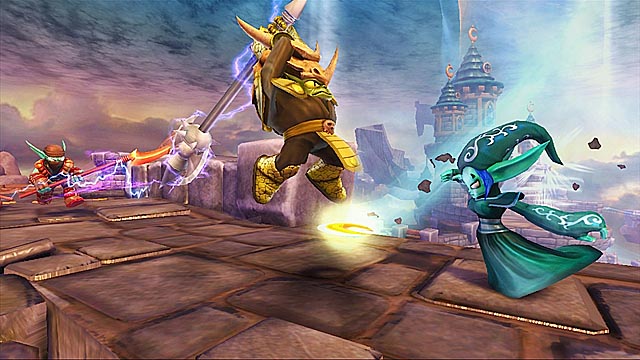 Smartly, the creators of Spyro’s Adventure didn’t skimp on the amenities. While character models aren’t articulated, each is agreeably detailed and sufficiently durable. With the Portal of Power plugged into a USB port (for the console and PC iterations) the pedestal floor glows with a gentle luminescence which varies by each Skylander. Both the Portal base and the bottom of each character give off a neon, emerald-hued glow, as well. Overall, the figures are impressive enough to propel players back to the stores to augment their team with additional characters (at eight dollars each). Fortunately, supplementary Skylanders aren’t needed to complete the game nor earn the game’s inventory of achievements/trophies, but they are required to open elemental-based gates which store stat-boosting items.

The expedition that takes place on the other side of the television screen is nearly as remarkable. Sending players through landscapes comprised of castles, pirate ships, crypts and flying fortresses, stages are fairly linear, sporadically requiring a key to access padlocked areas of the landscape. Skylander’s straightforward combat may shirk the characteristic jump, lock-on, and often, defensive elements- yet using each creature’s arsenal of attacks is undeniably gratifying as hit points spark from beaten foes.  Dispatching enemies rewards players with experience and money, which are both utilized to augment your team of Skylanders. Smartly, these light role-playing elements are never forced on players, allowing younger gamers to wail away on antagonists, without getting bogged down in statistical nuance. One aspect that might irritate adolescents is the game’s sporadically unskippable dialog, which is often a bit too verbose. 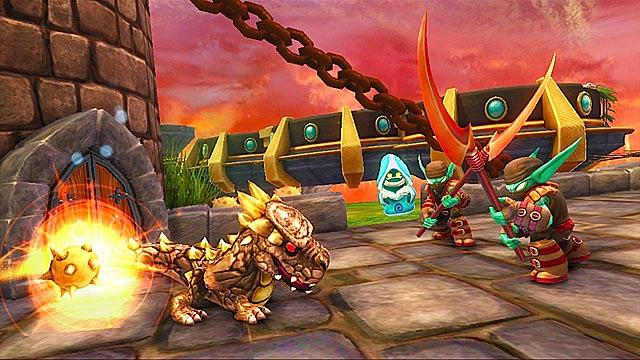 One of Spyro’s Adventure’s more contentious decisions occurs once players unlock an ability for a yet-to be-purchased Skylander. Here, the game offers to demonstration the new maneuver via a short in-game video. After viewing, I felt a distressing obligation to visit the local department store to strengthen my squad. For parents who just spend seventy dollars on the starter set, the pressure may verge on the dodgy. When each new Skylander figure grants an additional life on a stage, the incentive to expand your collection can be compelling.

Visually, Spyro’s Adventure vibrant colors and inventive character design are certainly charming. While the 360 version is attractive, an intermittent chuggy framerate and occasional low-res textures cause the title to look like a high-resolution port of the Wii version. The intermittent awkward animation is also present; characters leaving a turret seat looked like they were pulled by the claw of an invisible crane machine. The game’s music fares far better, delivering whimsical melodies as well as strains which convey the menace of imminent danger. 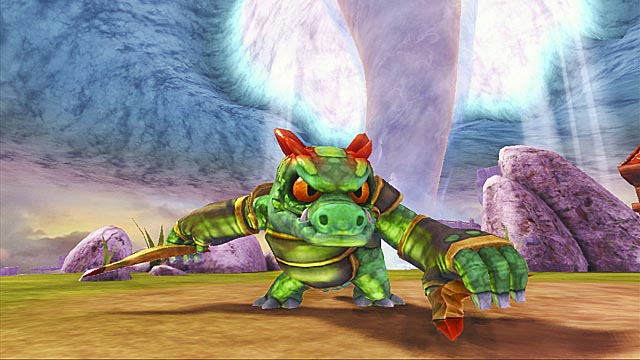 Although Skylanders: Spyro’s Adventure is aimed at a youthful market, it’s one the rare titles which transcends it target demographic. By complementing it’s collection of well-made figurines with a lively action game, Toys For Bob has managed to upstage Pokémon developer Game Freak, bringing its roster of creatures into the real-world. If the next Spyro doesn’t force players to rebuild their collection and polishes some of this game’s uneven edges, I wouldn’t be surprised to see a throng of thirty-something’s lining up on launch day.