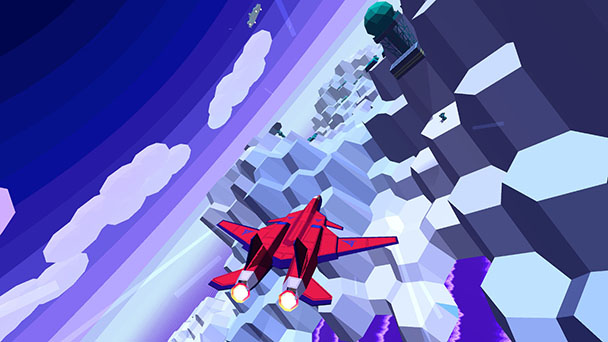 Eliminating mundane duties like take-offs, reconnaissance, and landings, dogfighting games permit players to jump right into the action. Unfortunately, there’s not all that many of them anymore, with titles like Ace Combat, Crimson Skies, and H.A.W.X. failing to make to the leap onto this generation of consoles. To help fill in the gap, Sky Rogue has taken flight on the Switch’s barren skies, extending action-driven aerial battles combined with a rogue-like approach. And while that description might make Sky Rogue seem like a strange bird, in execution the title largely soars.

Much of the success stems from the game’s adept handling of fundamentals. Whether players hop into Arcade or Endless mode, that will be evident after launching from your sky-high carrier. Soon, enemy drones will come jockeying for your six, and unlike many dogfighting titles, tangos seem to work in tandem. Instead of flying in tightly-formed squadrons making targeting all too easy, they’ll buzz around players, maintaining a realistically erratic flight plane to keep you from getting a missile lock. 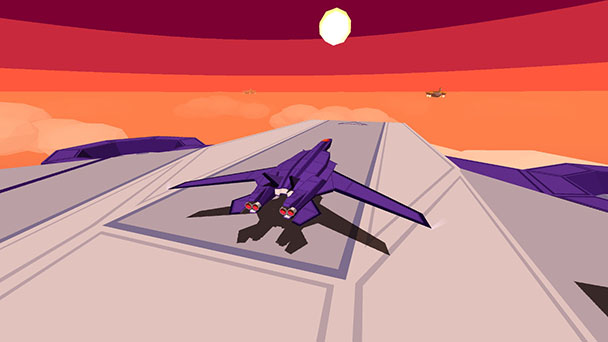 Controls are another of Sky Rogue’s merits. While the game allows owners to hold a Joy-Con in each hand, feigning throttle and flight stick control as you hold the peripherals in midair. Recalling the ill-fated motion control of Wii titles like Sky Crawlers: Innocent Aces or Blazing Angels: Squadrons of WWII, input here lacks precision, putting pilots in danger. Instead you’ll want to use a Pro Controller or the Joy Cons in some type of aligned formation, using the left analog stick to careen across the gradient filled skies. Opt for Arcade controls and you’ll enjoy an experience as accessible as Afterburner. But most will want authentic flight controls, where pulling down on the left analog stick sends you soaring toward the upper stratosphere.

Here, you can adjust the amount of throttle with triggers, cutting power to make a swift turn on a snaking opponent or speeding up to catch a runaway cargo jet. Just as important, you can use the shoulder buttons to work the ailerons, which is essential when you are getting ready for a bombing run. Like most respectable dogfighters, Sky Rogue feels responsive, as save for rare drop from the targeted sixty frame-per-second delivery, the game typically runs fluidly. (There’s also a bug which shows polygonal wing parts in first-person mode). While there’s no narrative or impetus for your actions, air combat is stirring, with fifteen to twenty-minute play sessions usually filled with close-calls and often ending when pilots stop playing prudent and take risks. 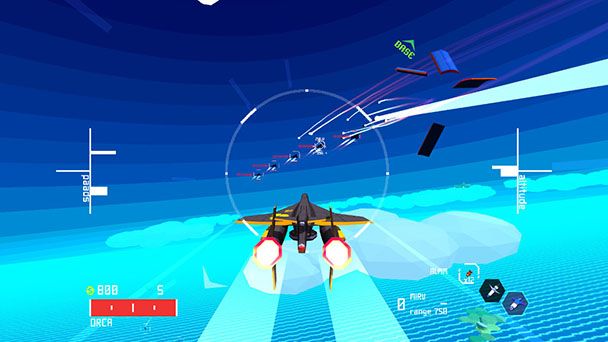 With a fleet of unlockable aircraft and weapons, there’s plenty of reasons to return to the commute-length sorties. Successful missions reward you with the option to research new jets or weapons. While these fall into established types, with armaments like guns, air-to-air, rockets, and bombs to unlock, it’s almost always enjoyable to try out your newly earned widow-makers. Some, like unguided bunker busters are a lot of fun to use, sending players precariously close to the ground as they attempt to release their deadly payload. Since, your weapon systems are all tied to cool-down timers that gradually replenish supply, there’s almost always tension with little downtime.

The only real downside is the limited number of enemy types and the tendency for procedurally-generated missions to feel a bit homogenous. Whether you’re tasked with downing a bomber and blowing up a factory, the landmass below is always a small, and relatively flat island, while the tactic for dealing with each type of opponent remains static. I would have liked to have seen missions where I’m ordered to eliminate a weapons station shielded in a mountain range, forcing a white-knuckle canyon run. Still, there are some highlights, such as when you attempt to take down a well-armed, floating battle station. But I just wish there were more set pieces incorporated into play. 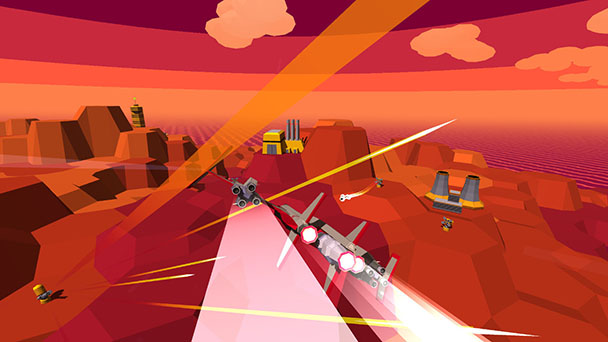 Beyond being able to study new hardware, there’s also a tech level which increases each time you are killed in action. This not only helps to soften the sting of defeat, but also opens up new research options, keeping the carrot on the stick dangling in front of players. Nicely, players can bring any earned armaments into a cooperative multiplayer mode, with Sky Rogue offering either horizontal or vertical split screen play.

Although the mix of dogfighting and rogue-like elements might seem like an odd mix, Sky Rogue deftly melds the two components, creating a captivating combat experience. More variety in both enemy and environment would have been beneficial, but for ephemeral play sessions, Sky Rogue largely delivers the goods. Now if developer Fractal Phrase could deliver a Mecha Rogue game, someone would have to pry us out of the cockpit. 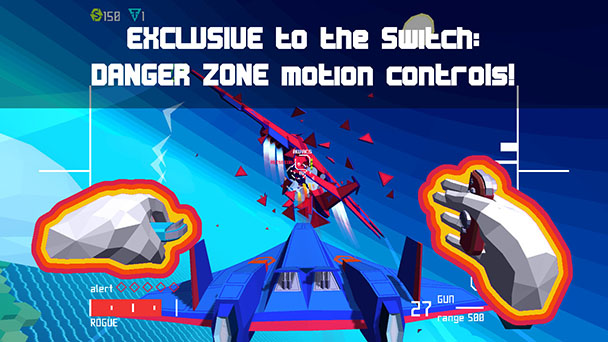 Sky Rogue was played on the Switch with
review code provided by the publisher.

Sky Rogue
Platform: Switch, previously on PC
Developer: Fractal Phrase
Publisher: Fractal Phrase
Release date: April 26th, 2018
Price: $19.99 via Nintendo eShop
Sky Rogue (Switch) review
Eliminating mundane duties like take-offs, reconnaissance, and landings, dogfighting games permit players to jump right into the action. Unfortunately, there&rsquo;s not all that many of them anymore, with titles like Ace Combat, Crimson Skies, and H.A.W.X. failing to make to the leap onto this generation of consoles. To help fill in the gap, Sky Rogue has taken flight on the Switch&rsquo;s barren skies, extending action-driven aerial battles combined with a rogue-like approach. And while that description might make Sky Rogue seem like a strange bird, in execution the title largely soars. Much of the success stems from the game&rsquo;s adept&hellip;

Summary : Hopefully, Sky Rogue doesn’t fly underneath the radar of Switch owners. Here’s a quality dogfighter, with accessible controls, a myriad of unlockables, low-poly visuals and a searing chiptune soundtrack. If those attributes sound appealing, a test flight is recommended.