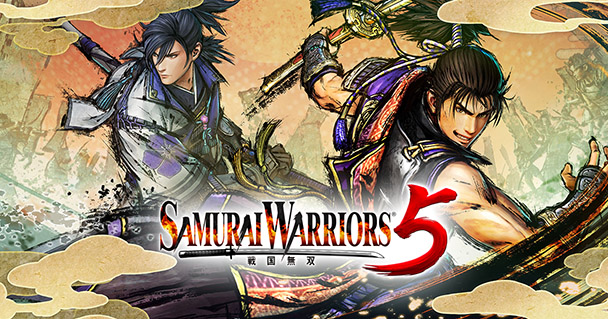 Context in emphasized in Samurai Warriors 5, which adopts a tighter narrative focus. Complemented with a new art style and mechanics borrowed from other musou offerings, it helps offset a smaller cast of playable characters. 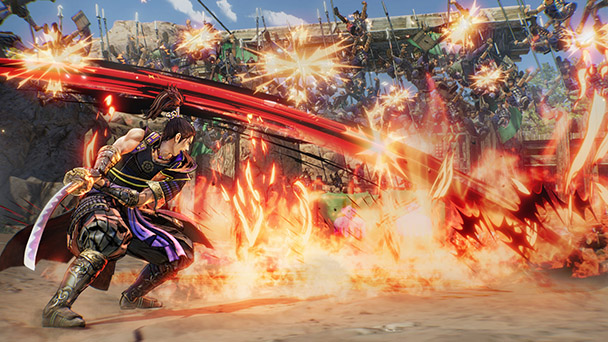 Once subject to widespread ridicule, Omega Force’s musou games have grown into essential experiences, especially for those with an appreciation for East Asian folklore. The developer’s Dynasty Warriors franchise began as a tolerable fighting game. But across twenty-four years the series grew into a hack-and-slash fueled, interactive retelling of Luo Guanzhong’s Romance of the Three Kingdoms, widely considered one of the most works in Chinese literature. Each iteration retold the same tale of ancient China on the brink of war, the downfall of rulers, and heroes born in tempestuous combat.

Alongside a multitude of improvements, an inventory of additions that added sophistication, and a growing roster of playable characters, storytelling was remarkably improved. The series’ early efforts rewarded a thorough knowledge of the source material, building gameplay around the tensions faced by generations of historical figures. More recently, Omega Force’s storytelling has become decidedly less complicated and dry, and favored a more movie-like style. 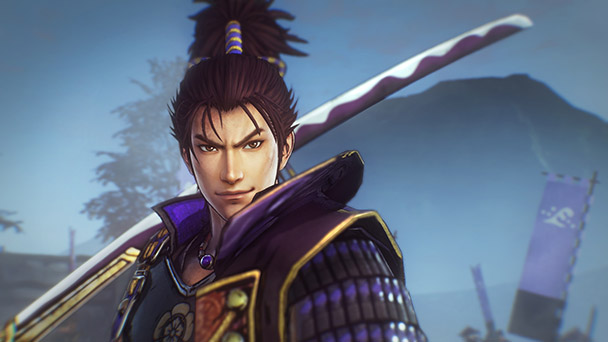 That approach was evolved with Samurai Warriors: Spirit of Sanada, a spin-off from the franchise’s fourth entry. Omega Force wasn’t trying to detail the unification of Japan once more. Instead, their focus narrowed, opting to depict the involvement of a specific clan, Sanada Masayuki and his sons, Nobuyuki and Yukimura. The release of Samurai Warriors 5 revisits this rich expositional method, detailing the arcs of Nobunaga Oda as well as vessel turned rival Mitsuhide Akechi.

Typically, the chronology starts later, detailing the latter years of Nobunaga’s aspiration for unifying all of Japan. But Warriors 5 reaches back further into the Sengoku period, observing the two protagonists in their youth. It’s fascinating to witness Nobunaga win the confidence of those around him, during his interactions with in the Owari and Mino Provinces. Plotting is handling through a combination of visual novel sequences and CGI interludes that really bring the characters to life. 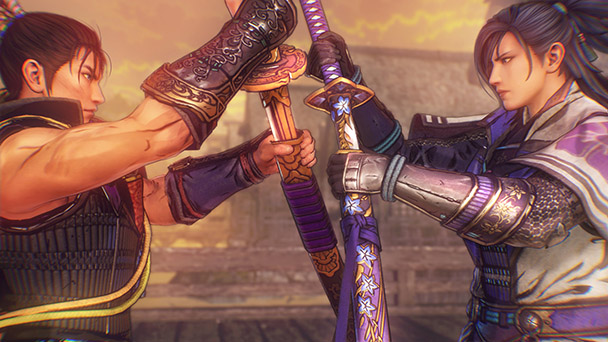 More importantly, Samurai Warriors 5 adopts a shrewd approach, ensuring that new characters are introduced at a measured rate and provides plenty of pulp (439-year-old spoiler ahead) leading up to the inevitable betrayal. To keep the interest of longtime fans, there’s been a curious interpretation of character personalities. Historians might balk, but it makes for a clever retelling for the well-versed.

Whereas Ieyasu Tokugawa, is often seen emerging into a role as a dignified shogun, here he’s bishōnen fodder who shifts from hostage to loyalist quicker that you can say “Stockholm Syndrome”. Lady Nō isn’t the political pawn turned prototypical tsundere of previous games. She’s depicted as having a growing admiration for Nobunaga adding a dash of tenderness to the proceedings. Even Nobunaga isn’t quite as tyrannical in this reimaging, with the game providing justification for many of his despotic behaviors. 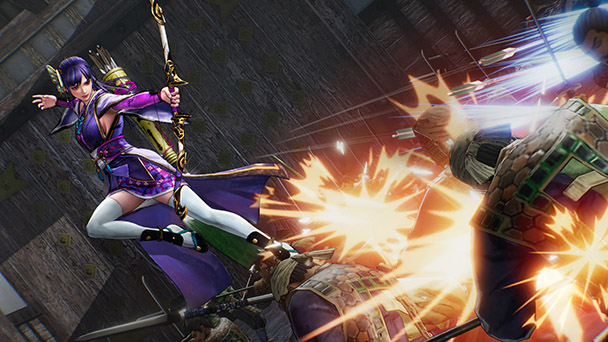 The downside of the narrowed narrative scope is a loss of material. Samurai Warriors 5 scales back the number of playables from 55 to 37 characters, leaving beloved notables like Musashi Miyamoto and Kotaro Fuma on the sidelines. Across the main campaign, you’ll spend the majority of time controlling either Nobunaga or Mitsuhide. Sporadically, secondaries are given the spotlight, contributing variety. Some musou aficionados might also be disheartened by the shift from character-specific move-sets to weapon-based ones. Samurai Warriors 5 does it best to disguise this with eccentricity. From a drum that emits energy blasts, bows that launch an army’s worth of arrows, and origami cranes capable of freezing foes, there’s a refreshing amount of unconventionality. And undoubtedly, newcomers Yasuke and Sena deserve permanent spots in the Samurai Warriors roster. 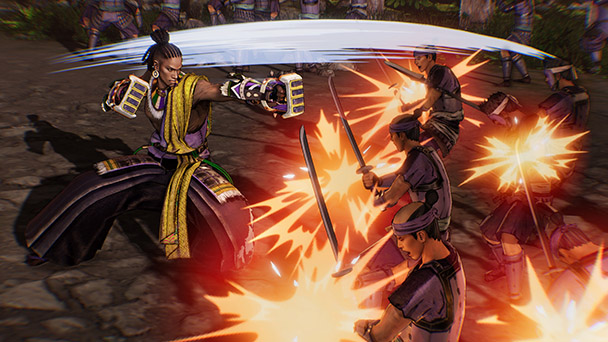 Combat has always been a decisive attribute, depicting characters bashing their way through dozens of foes. Samurai Warriors 5 does little to change that, instead integrating mechanics from other musou series. Samurai Warriors 4’s Hyper Attacks make a return, frantically merging map travel and the one against a hundred fracases. On easier difficulty settings, it persists the button mashing tradition, permitting players to sweep up battalions of adversarial forces.

But tactics will have to change when you encounter an enemy officer, as well as troops with glowing shields or spears. Each is resistant to Hyper Attacks, but susceptible to Ultimate Skills, a feature borrowed from Omega Force’s One Piece: Pirate Warriors 4 and Persona 5 Strikers. Here, characters can map four special moves, that do everything to summon devasting assaults, increase attack power, or refill your musou gauge. The cooldowns for these are rather lenient, which can quick quicken the pace of a stage. 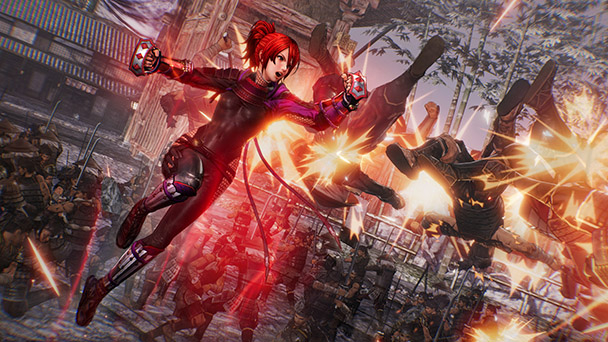 The Most Eye-Catching, Ear-Pleasing Warriors Yet

Alongside the main campaign, you’ll also be goaded to participate in Citadel mode. With either an AI or cooperative partner, you’re tasked with protecting a base from waves of attackers. Although the premise might sound tedious, it is elevated by the possibility of character interactions between particular pairs, recalling Fire Emblem. Resources earned here transfer over to the main game, so any efforts are fairly rewarded, providing an alternative method for level grinding. Of course, there’s also Free Mode, where you can lead any unlocked character into battle.

Samurai Warriors 5’s art style is undoubtedly one of its most striking qualities. While it doesn’t seek to emulate ukiyo-e, there’s definitely a stylish influence. Characters flaunt subtle cell-shading while the background offer muted colors, while combatants are adorned in more vibrant colors. While the game’s camera continues to misbehave within indoor areas, some of the texturing is rather exquisite, showcasing some the grandeur of the era. While recent musou titles have had a captivating soundtrack, Warrior 5 is one of Omega Force’s best. Combining classical instruments like the shakuhachi and taiko with modern musical influences, the game persistently pumps you up during battles. 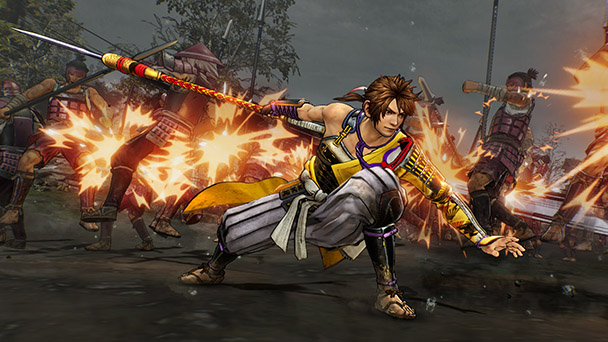 When it comes to storytelling, Samurai Warriors 5 is proficient, thanks to its tighter focus. But this approach also led to a loss of the distinction for the game’s larger cast. Elements like animations are now tied to the weapon’s system, making the latest outing a bit more homogenous. As such, Warriors 5 offers plenty of sizzle during its initial 35-hour playthrough but comes up a bit short in longevity. It’s a tolerable trade-off given the aesthetic improvements, though.

Samurai Warriors 5 was played on PC
with review code provided by the publisher.

Samurai Warriors 5 review
Context in emphasized in Samurai Warriors 5, which adopts a tighter narrative focus. Complemented with a new art style and mechanics borrowed from other musou offerings, it helps offset a smaller cast of playable characters. Once subject to widespread ridicule, Omega Force&rsquo;s musou games have grown into essential experiences, especially for those with an appreciation for East&hellip;

Summary : The focus on the relationship between Nobunaga Oda and Mitsuhide Akechi makes Samurai Warriors 5 an inviting entry for newcomers, providing context for no less than three Koei Tecmo series. Just don’t expect the same encyclopedic approach to playable characters this time out.