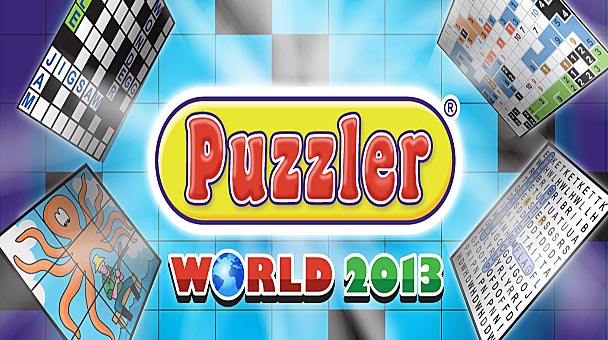 Browse through either retail budget bins or through Nintendo’s own eShop and you’ll likely discover a plethora of puzzle collections. Unfortunately, many are of these compilations are of a distressingly second-rate quality. Beyond Nintendo’s first-party Brain Age, Picross, and Crosswords Plus titles, players are destined to encounter clunky conversions of pen-and -paper posers sutured together with a slipshod user interface. One of the rare third-party franchises to transcend this tradition is Puzzler World, a series from Manchester-based developer Ideas Pad.

In the U.S., Puzzler World titles have seemingly struggled, as they’ve passed between publishers such as Atari and Ubisoft with minimal marketing efforts. That’s a shame, as the recently released third iteration- Puzzler World 2013, is crammed with well-crafted standards such as crosswords and Sudoku, as well as a number of captivating new variants. While the game’s ambitions won’t interest players seeking adrenaline-secreting thrills, those yearning for a cerebral challenge will certainly want to add the $9.99 title to their download itinerary. 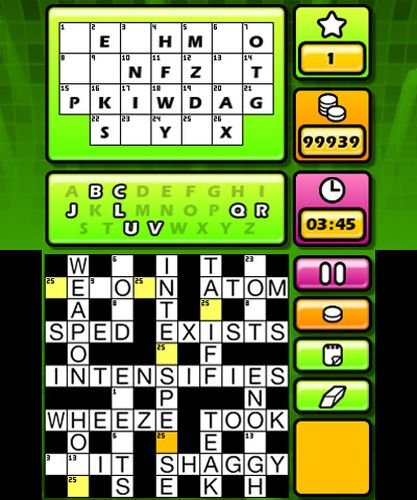 Initially, players will discover 560 diversions across Puzzler World 2013’s Challenge Mode, which offers an attractive assortment of 27 different game types. Mainstays such as Wordsearch, Spot the Difference, Hangman, and jigsaws puzzles are all present, each elevated by an efficient, responsive, and unified user interface. Crosswords use the directional pad or stylus to conveniently shift through down and across responses, with the input of letters handled by handwriting recognition. Capably, Puzzler World consistently identified my admittedly poor penmanship, but for those with even more disorderly scrawls, the title includes AI which can learn to detect a person’s particular squiggles.

Splitwords uses an intuitive input method, allowing players to use their stylus to slide around groups of clustered letters.  Like many of Puzzler World 2013’s other amusements, it’s a clever tweak on an existing type of conundrum; in this case, the change provides a pleasing simplification to anagrams. Pathfinder converts the traditional wordsearch into a labyrinthine network of phrases, tasking players to trace over key terms. It’s a remarkable deviation that makes the game easier as it persists, lending a satisfying tempo to the conventional find-a-word. However, despite these alleviating tweaks, Puzzler World 2013 is rarely a pushover, especially for Americans who might not be as conversant with the game’s U.K.-grounded vernacular. Puzzler World also likes to throw players headfirst into new game types without any introductory explanation. Fortunately, the game’s pause menu offers a codex of basic rules for each game to point players in the right direction. 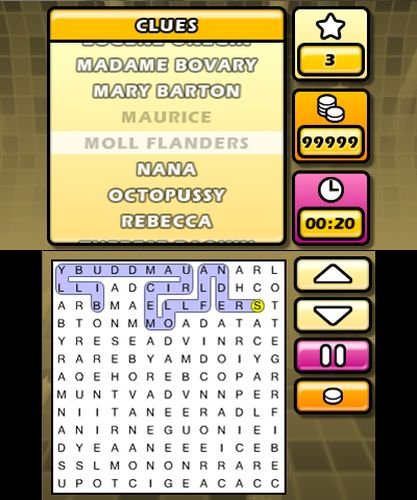 Credit should be given to Puzzler World 2013’s metagame, which both prods players along as well as provides currency used to fund an assist system. Each completed activity rewards players with a trip to the Fruit Machine, where players watch the slot’s dials spin until credits are earned. Cunningly, players may continue gambling their earnings in hopes of a earning a bigger windfall. Otherwise, credits may be used in each activity to uncover small, medium, and large-sized assistance. Given the number of puzzlers and the variety of game types, it’s forgivable that the help system has a few imperfections. In my case, a seemingly finalized crossword puzzle wasn’t showing up as completed, meaning I bungled a single letter or two. Regretfully, Puzzle World’s help options wouldn’t have assisted with depleting my bankroll. That said, if stumbling block is hit, the title never blocks progress, allowing players to move onto other brainteasers, conveniently offering to save any progress.

Many puzzle collections are little more than marginally interactive translations of inexpensive pen-and-paper books. Although Puzzler World 2013 includes an ample quantity among its assembly of over 1200 head-scratchers, it’s the activities that take advantage of the 3DS’s touch-screen capabilities which allow the title to outshine the plethora of puzzling contemporaries. Given the game’s diminutive 185 block footprint, cornucopia of content, and equitable price, adding Puzzler World to an SD card is a bit of a no-brainer. 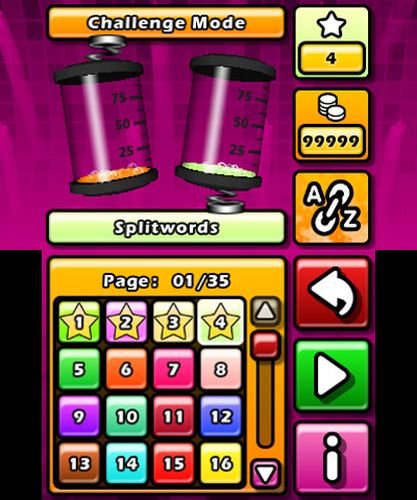 Puzzler World 2013 Review
Browse through either retail budget bins or through Nintendo&rsquo;s own eShop and you&rsquo;ll likely discover a plethora of puzzle collections. Unfortunately, many are of these compilations are of a distressingly second-rate quality. Beyond Nintendo&rsquo;s first-party Brain Age, Picross, and Crosswords Plus titles, players are destined to encounter clunky conversions of pen-and -paper posers sutured together with a slipshod user interface. One of the rare third-party franchises to transcend this tradition is Puzzler World, a series from Manchester-based developer Ideas Pad. In the U.S., Puzzler World titles have seemingly struggled, as they&rsquo;ve passed between publishers such as Atari and Ubisoft with&hellip;

Summary : Those who appreciate Professor Layton’s posers but are uninterested by the overarching narrative are encouraged to give to give Puzzler World 2013 an attempt.

Previous: New Releases for the Week of April 24th-30th, 2013
Next: Black Rock Shooter: The Game Review