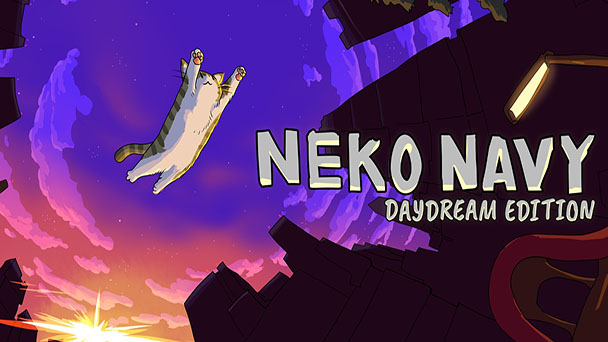 An Adorable Shoot ‘Em Up

In a perfect world, cute ‘em-ups would be released with regular frequency. But save for two Deathsmiles titles, the disappointing Otomedius, and QP Shooting – Dangerous!!, the last decade has delivered a discouraging number of adorable shooters. Fortunately, QP Shooting’s Western publisher, Fruitbat Factory seems to recognize this shortage. With a port of Neko Navy, the Finland-based firm brings a number of lovable felines onto Switch, each cat tasked with bringing down a cavalcade of foes across seven horizontally scrolling stages.

Initially, players select from one of the three difficulty levels that range from Easy, Hard, and Death; each only offering a slight underestimation of the challenge ahead. Next, you’ll choose from Chiyoko who sends out a wide beam of firepower, Mugi’s more modest spray of weaponry, or Miracle, who sends out a single beam along with a revolving corkscrew of enemy-eliminating projectiles. Later, you’ll even unlock an additional neko, providing that you’re bullet dodging skills are up to snuff. 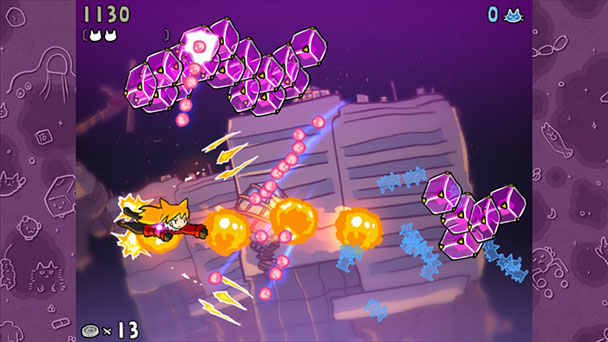 As with any respectable STG, players aren’t stuck with a default loadout. Destroying one of the game’s larger enemies can leave a power-up floating around the playfield. While these offer a slight increase to your projectile-pumping output, Neko Navy’s offensive buffs won’t radically improve your loadout- giving a slight boost to your feline’s potency. Besides different movement speeds and weapon traits, each kitty has their own distinctive special attack. From an avocado-colored cloud that assaults anything in its vicinity to a searing flamethrower attack, your secondaries are ideal for when things become exceedingly tough.

More importantly, specials are also used during the moments when Neko Navy’s emits a plethora of projectiles. By activating the assault, players are granted a few seconds of invulnerability, which are vital when the game’s tosses the occasional cavalcade of foes that stretch across the screen. Like a handful of other shooters, timing of the offensive is essential. Not only can a precisely-timed defense save one of your lives, but the attacks convert enemy bullets into orange cubes, which can be picked up for substantial amounts of points. Aa such, score-chasers will probably use Neko Navy’s specials regularity to acquire a place of the game’s online or local leaderboards. 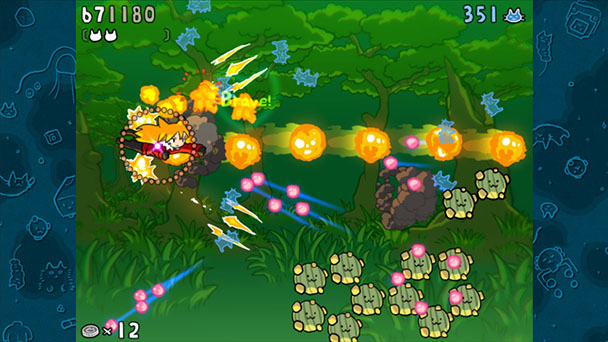 As with most STGs, Neko Navy’s stages are largely static, with enemies exhibiting no adjustments to player behavior. Thematically, the game’s levels convey whimsy, ranging from flora-filled wilds, topsy-turvy cities and a delicatessen adorned with hanging sausages. Similarly, bosses are just as zany, with players tackling flowers with shifting buds and even a maniacal meat-man. While these showdowns don’t depart from genre convention, they do offer an elevated level of challenge that are enjoyable without being overpowering. Stages largely play the same, with only slight variants like a diagonally-scrolling section to add a bit of divergence to the proceedings.

Running on Unity, Neko Navy makes for a competent Switch port, extending a solid thirty frames-per-second output in both docked and handheld mode. Either way, Daydream Edition mirrors the screen formatting of its PC brethren, with borders on each side of its 4:3-sized playfield. Aesthetically, the title is adept with an array of delightful-looking but eccentric enemies. For those inexperienced with shooters, the game offers a number of comforting aids. Not only is each neko’s hit box highlighted, but vulnerable points on each boss are highlighted. Sonically, the game’s soundtrack is unconventionally soothing, shirking the intense BPM that set the cadence to most STGs. For the DayDream Edition, Switch owners receive a perk that wasn’t in the original release. Infinity Mode extends an endlessness procession of foes from the game, challenging players to see how many points they can score with a single life. 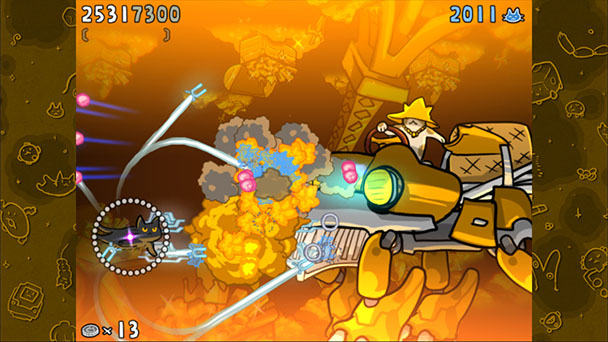 Almost as Irresistible as a Kitten

Although Neko Navy’s play might lack a bit of distinction, genre aficionados might appreciate its adorable approach to the shoot-‘em-up and the game’s procession of silly enemies. With fluid fun play and an additional mode for Switch owners, there’s little to prohibit players from enjoying themselves with DeathMofuMofu’s otherwise delightful doujin STG.

Neko Navy: Daydream Edition was played on the Switch
with review code provided by the publisher.

Neko Navy: Daydream Edition review
An Adorable Shoot &lsquo;Em Up In a perfect world, cute &lsquo;em-ups would be released with regular frequency. But save for two Deathsmiles titles, the disappointing Otomedius, and QP Shooting &ndash; Dangerous!!, the last decade has delivered a discouraging number of adorable shooters. Fortunately, QP Shooting&rsquo;s Western publisher, Fruitbat Factory seems to recognize this shortage. With a port of Neko Navy, the Finland-based firm brings a number of lovable felines onto Switch, each cat tasked with bringing down a cavalcade of foes across seven horizontally scrolling stages. Initially, players select from one of the three difficulty levels that range from Easy,&hellip;

Summary : While not quite purr-fect, enlisting in the Neko Navy offers a few perks, sending a pack of kitties in seven horizontally scrolling environments that aren’t quite as difficult as most shmups.