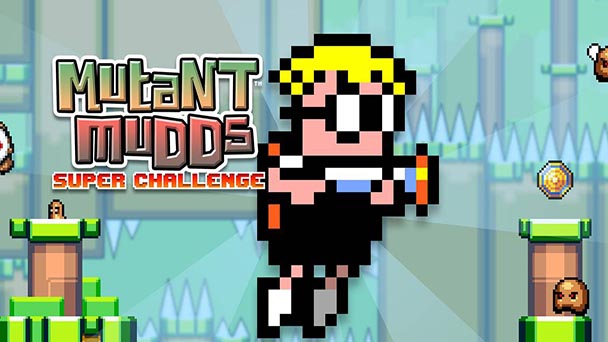 What is the concept? 2012’s Mutant Mudds proved that not every game needs a weighty storyline or elegantly evolving play mechanics to maintain a player’s attention. As gaming’s early years demonstrated, a simple concept that’s polished to near-perfection can captivate players. And that’s exactly what Mudds did, putting gamers in the role of Max- a pixelated protagonist outfitted with little more than a water gun and hover jump.

Nurturing the type of navigational precision needed to overcome any demanding platformer, developer Renegade Kid provided precise controls and a succession of stages that gradually increased in difficulty. Beyond being able to jump, shoot, and duck, Max could also could also stand on orange-colored pads, launching himself into the fore or background. There, he could  collect some of the 100 diamonds that were methodically scattered around each level. 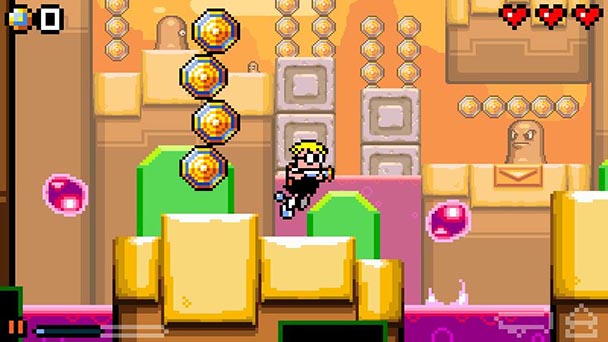 As the moniker of Mutant Mudds Super Challenge’ suggests, this time the level adversity has been thoroughly escalated. Using the same toolset (this time augmented with a trio of power-ups) and moving through aesthetically similar environments, the follow-up’s most significant variance is the amount of challenge. This time out, levels are utterly brimming with danger, tasking players to ratchet up their level of master with Mudds once more.

What are the game’s strengths? This time out, Renegade Kid has listened to fans, injecting taxing boss battles into the campaign. Merely getting to these battlegrounds isn’t easy, with gamers required to beat an entire succession of stages and collect every diamond before being able to engage the enemy. Pleasingly, these confrontations live up to expectations, with fights that will test both reflex and the ability to perceive pattern. 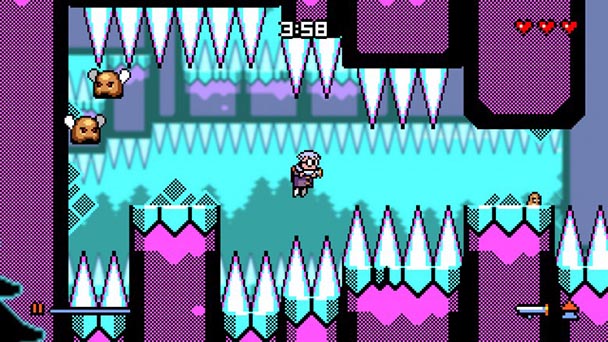 Confronting these opponents into the only deviation here. Both the G-Land and V-Land return, with portals that will transport you to either monochromatic Game Boy areas or crimson-drenched destinations that pay homage to the Virtual Boy. Hidden CDs require unearthing before tunes from both Super Challenge and the original Mutant Mudds can be played in the the game’s hub. The biggest surprise is the inclusion of twenty different character skins for Max. Although they don’t alter any play mechanics, finding a new one is consistently gratifying.

Players who blew through the first game might appreciate the upsurge in difficulty. Here, players will be tasked with advanced techniques like hoover-cancels and pixel-perfect leaps as they take on masochistic amounts of spikes, enemies, and chasms. Thanks to a thoroughly polished control scheme, blame for Max’s reoccurring demise can’t be level on the coding, with the protagonist nimbly and precisely responding to easy command. Instead, culpability is found when players don’t foresee how a multitude of sliding platforms, spikes, and roving enemies can put Max in peril. 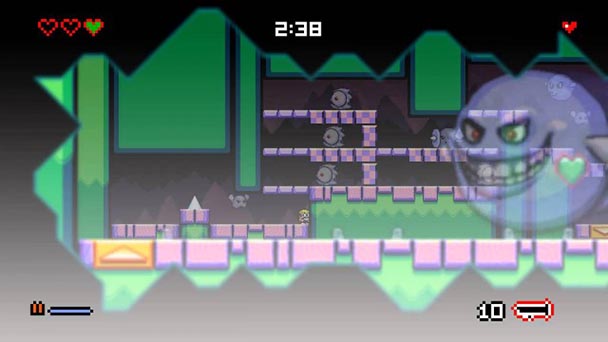 What are the game’s weaknesses? For some, the persistent parade of punishment will prove to be a bit too much. Even for those with razor-sharp reflexes, breaks will be needed to reduce the mounting frustration poised to accumulate during the forty-stage trek. If you’re the type of gamers who experiences exasperation during a sequence of same-stage deaths, you might want to eschew Super Challenge and go with the original Mutant Mudds. Of course, if you can speed through Super Meat Boy without emitting a string of expletives, then turn off the mid-level check-points and have at it.

Another minor quibble with Super Challenge centers on the recycling of assets. Although the game’s soundtrack boasts a number of new tracks, there are also several tracks which make an appearance from the first game. Similarly, the reappearance of advanced enemy types makes the game feel more like Super Mario Bros.: The Lost Levels that the Super Mario Bros. 3-esque sequel you might be hoping for. 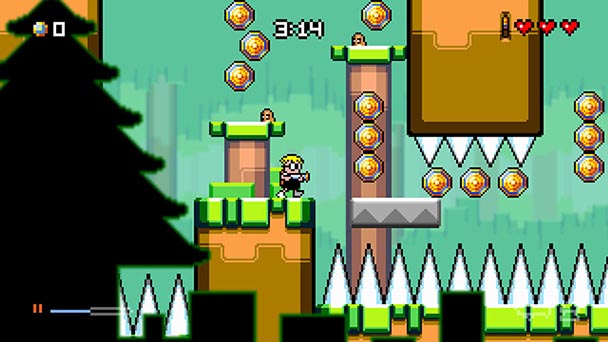 Is it worth the money? If you’re the owner of a Wii U and a 3DS, Mutant Mudds Super Challenge issues an enticing offer- giving gamers a code that effectively extends cross-buy encouragement. While the console version can’t offer the nifty stereoscopic functionality of the 3DS iteration, being able to play off-screen with the Wii U Gamepad is a contenting substitute. For players that don’t own both systems, the game’s $9.99 price isn’t prohibitive, so long as they’re aware of the trial ahead.

Mutant Mudds Super Challenge
Platform: 3DS, Wii U
Developer: Renegade Kid
Publisher: Renegade Kid
Release date: March 17th, 2016
Price at release: $9.99 via eShop
Mutant Mudds Super Challenge review
What is the concept? 2012&rsquo;s Mutant Mudds proved that not every game needs a weighty storyline or elegantly evolving play mechanics to maintain a player&rsquo;s attention. As gaming&rsquo;s early years demonstrated, a simple concept that&rsquo;s polished to near-perfection can captivate players. And that&rsquo;s exactly what Mudds did, putting gamers in the role of Max- a pixelated protagonist outfitted with little more than a water gun and hover jump. Nurturing the type of navigational precision needed to overcome any demanding platformer, developer Renegade Kid provided precise controls and a succession of stages that gradually increased in difficulty. Beyond being able to&hellip;

Summary : Between the sublime, retro-inspired play mechanics and a cross-buy promotion, Mutant Mudds Super Challenge belongs in your library. Just make sure you have the patience for the stratospheric difficulty level.