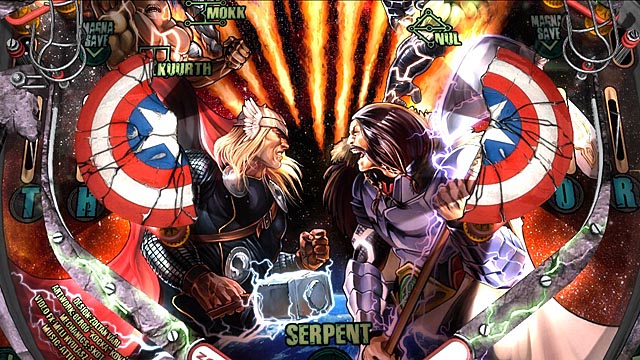 In the real world, the future of mechanical pinball is balanced on a precarious precipice, steadied by the contributions of two audacious manufacturers: Jersey Jack and Stern. However, in the realm of simulation, the recreation remains poised, thanks to the efforts of developers such as Farsight, OOO Gameprom, Silverball, as well as the prolific output by the reigning champions at Zen Studios. From their inaugural iOS app, Zen Pinball: Rollercoaster, the Budapest-based outfit has gradually enhanced their imitation of real-world pin, refining elements such as ball physics as well as the layout of each playfield across iterations across smartphones, portables, and consoles. For Marvel Pinball Avengers Chronicles, the development house ventures past the confines of stanch simulation, delivering four tables which offer mechanics inimitable by actual machines.

Drawing inspiration from the recent film rather than cartoon or comic series, the collection’s Avengers table might just be the set’s highlight. Players begin each game by choosing one of six uniquely skinned balls, each representing a different hero. Cleverly, the differences between each orb are more than cosmetic, with each sphere extending distinctive scoring opportunities as well as abilities. From Captain America’s capacity to secure a ball save, Hawkeye’s talent for escalating the value of skill shots to Iron Man’s aptitude to secure higher combos, ball selection endows Avengers with an intriguing number of techniques to earn a spot on the leaderboards. Procuring multiball assembles the team- resulting in one of the most passionate sessions found on the collection, as the heroes attempt to defeat a certain malicious Asgardian god. 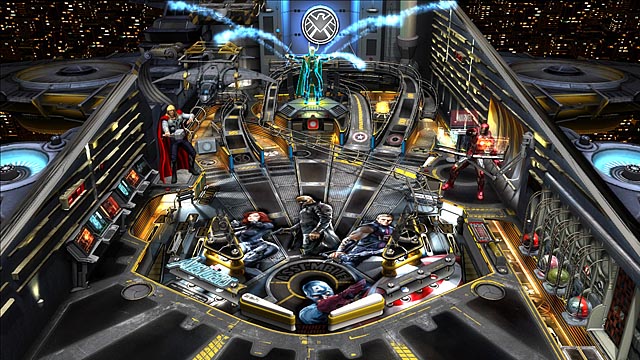 Based on a five issue comic series, World War Hulk follows the journey of the green behemoth as he’s tricked into space then returns to Earth fixated on vengeance. Like the rest of the Avengers Chronicles tables, Hulk demonstrates Zen’s improved ability to infuse a loose narrative as player’s thump drop targets and send their ball hurtling down lit lanes. Skillfully, the playfield also channels the speed and might of the irradiated brute, with a ball with careens through a network of loops and along elevated railings. While the table seems rooted in reality, Hulk does deliver an unseen mini-table called the Arena- where diminutive flippers attempt to keep the steel sphere circling around a high-speed recreation of a wrecked basketball court.

Fear Itself offers the compilation’s most conspicuous mechanic, with simulated magnets strewn about the field. From holding the ball in place to sending the metal orb circling around the outlanes, the table is an undeniable attention grabber. These elements also inflate Fear’s level of difficulty, with drains occurring when the game’s ball saves aren’t initiated. Beyond a Pong-like minigame, the table is also remarkable for its animated creatures. Ranging from Skadi’s formidable hammer-pound which launches a ball into play to the Midgard Serpent’s flickering tongue and circuitous movement, Fear Itself is a visual feast. 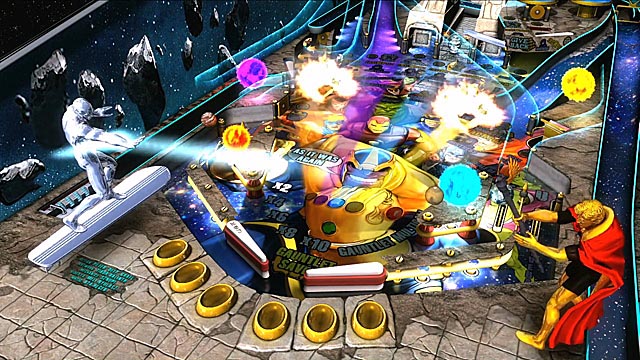 Rounding out the collection in The Infinity Gauntlet, which tasks heroes such as The Silver Surfer and Adam Warlock with defeating the Mad Titan, Thanos. Flaunting over 130 lines of dialog, the table reveals Zen Studios tacking a recurring weakness- substandard voice acting. Featuring a sufficiently passionate and bass-heavy delivery, Thanos continually taunts players with declarations right from the comic series, issuing up menacing warnings such as “Away from me, you clowns”. Imaginatively, each time players acquire one of the six Infinity Gem from the giant glove which loom over the playfield, Gauntlet delivers a different game-altering mechanic. With variants which range from inverting the state of flippers to flipping the entire table upside down, many of effects transcend the capabilities of actual pin machines. Hopefully, Zen Studios will prolong this trend- it would be a delight to see game which mirror the multiple tables and fantasy targets popularized by games such as Alien Crush, Devil’s Crush, Sonic Spinball or Adventure Pinball: Forgotten Island.

Graphically, Avengers Chronicles perseveres the developers’ dedication to offering an invigorating replication of pinball. With fanciful faux-LCD displays, gorgeous table art, and an unwavering framerate, the collection is visually gratifying. Sonically, the voice samples for each table are delivered with a suitable amount of comic-book bravado- but lack continuity between the tables. As such World War Hulk sounds drastically different from his Avengers counterpart. As expected, Chronicles maintains Zen’s robust leaderboard support, which is apt to drive gamers chasing after their friends scores. 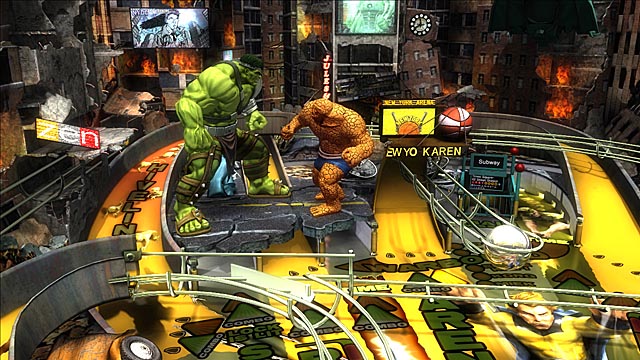 Considering that most actual pin machines cost between two to four quarters per game, the Marvel Pinball Avengers Chronicles ten dollar price is a comparative bargain. While compilations often sneak at least lackluster component past players, each of the four tables on the collection is both fastidiously designed and suitably engaging, securing Zen Studios place as shining star of silver sphere simulation.