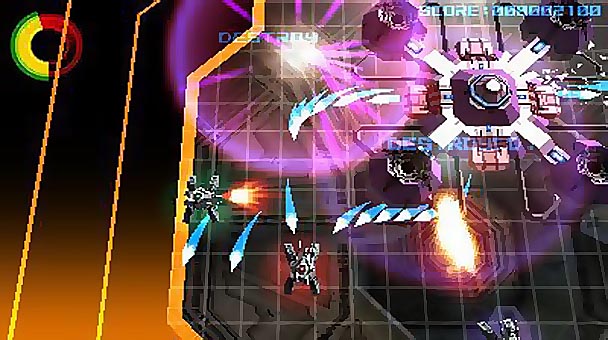 What is the concept? Behind every critically-acclaimed shooter is at least one captivating hook. 1985’s Gradius rose above its contemporaries with a creative risk/reward device known as the Power Meter. A press of the button could initiate a supportive speed boost- or players could delay gratification, collect additional orbs, and purchase an enemy-searing laser. Success in 2001’s Ikaruka’s hinged on the ability to cycle between two polarities. Collecting similar-hued bullets could fuel a special weapon, but impact with a contrastingly-colored projectile meant instant death.

Having served as the director for Gradius IV and Ikaruka, as well as having a hand in seminal shooters such as Gunstar Heroes and Sin and Punishment, Treasure alumni Hiroshi Iuchi has repeatedly demonstrated an ability to deliver a gripping game mechanic. The release of Kokuga onto the stateside eShop reveals Iuchi working in collaboration with shmup specialists G. rev. A refreshing reprieve from the bullet-hell shmup movement, Kokuga feels pleasingly fresh. As long as players can contend with an elevated price and a bit of aesthetic homogeneity, this overhead shooter is worth experiencing. 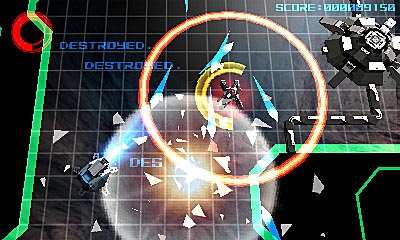 What are the game’s strengths? Input methods for shooters need to be transparent- if players have to think about the control scheme, they won’t become immersed in the turbulent, on-screen action. Masterfully, Kokuga’s controls are both immersive and responsive. Players use the Circle Pad to maneuver their tank through labyrinthine stages filled with fields of enemies and moving blocks that can provide cover. Moving the craft’s turret is accomplished with the top triggers. Since players control the pace of their assault, they typically don’t have to worry about foes encroaching from all directions. As such, the concurrent command of tank and turret control never feels overwhelming.

In execution, Kokuga is a game of patience, with players consciously scrolling the screen to reveal new targets, shooting at these enemies, and then backtracking to avoid return fire. Players also need to mind environmental elements; shifting grey blocks can suddenly push enemies or the players into areas. While projectiles are blocked by these slabs, other corridors allow the exchange of fire, urging players to be mindful of their position at all times. With divergence between player paths and lines-of-fire, Kokuga may be built from recognizable shooter mechanics, but taken as a whole, the game feels distinctive. 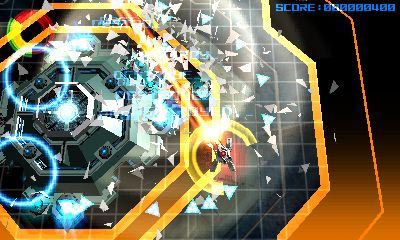 Complementing the tank’s basic attacks is Kokuga’s intriguing power-up system. In lieu of augmenting the protagonist’s loadout by gathering fragments left by eradicated enemies, the game gives players a full set of up to twenty consumables at the commencement of each stage. Ranging from offensive devices such as rapid fire, homing and three-way shots to defense-oriented such as shield regeneration, force fields, and a stealth mode where the protagonist becomes invisible to enemies. To activate any of these abilities, players merely choose from any of the four cards that are displayed on the bottom touch screen.

What are the game’s weaknesses? Kokuga’s card system allows for a bit of strategizing, as gamers access whether to use an aptitude to quickly blow through a section of pedestrian enemies or save the ability for a stage’s final boss. That said, the system could have been easily extended- awarding unlockables for success and allowing players to create their own customized decks. As it stands, concluding battles can feel frustrating, as gamers blow through a succession of random firepower intensifiers, when they desperately need to recuperate a bit of health.  Compounding this frustration is Kokuga’s lack of checkpoints; falling to the boss sends players back to the level selection screen. 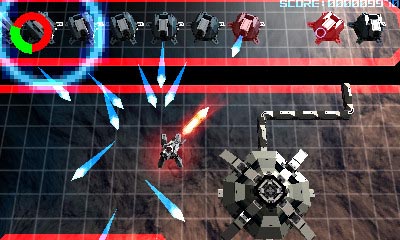 The title offers two distinct environments- a minimalistic Tron-like setting as well as one that’s decidedly less surreal. Although subordinate enemies have a common look, resembling steely turrets, tanks, and mines, there is a nice variety to their attack techniques. Between foes which emit beams, area-of-effect shells, or fields of fire and ones that dodge incoming projectiles or chase the player in packs, each of the game’s fifteen levels provide a pleasing mix of challenges. AI aside, there is a troubling similarity to the visuals of most stages, with little graphical novelty aside from boss designs. Score-chasers might be disappointed by the game’s point system, which presents almost no risk/reward opportunities. Ideally, a bonus correlated to stage completion time would be added at the end of a level.

Kokuga supports multiplayer, with options for both local and download play. Effectively, both options are similar, with the former offering shorter load times for cooperative teams. While this is a nice addition, the absence of net-play is sorely missed. Working collaboratively with online acquaintances would have been a pleasing addition for U.S.-based 3DS owners, who are all too often geographically separated. 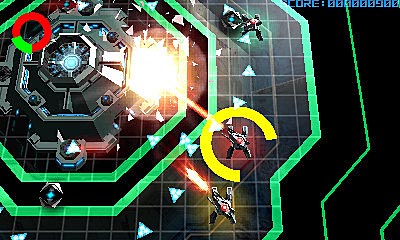 Is it worth the price? General perception assumes that shooters are becoming increasingly esoteric in the U.S. Although Kokuga’s fifteen dollar price is undoubtedly steep, a purchase sends the message that a constituency of stateside gamers still embrace the genre. If voting with your wallet doesn’t sit well with you, then pick up Kokuga because it’s an adept action title with a minuscule 268-block footprint. Ideal for commute-time play sessions, the game has earned a permanent place on my SD card, and an enduring position in my shooter-adoring heart.

Kokuga Review
What is the concept? Behind every critically-acclaimed shooter is at least one captivating hook. 1985&rsquo;s Gradius rose above its contemporaries with a creative risk/reward device known as the Power Meter. A press of the button could initiate a supportive speed boost- or players could delay gratification, collect additional orbs, and purchase an enemy-searing laser. Success in 2001&rsquo;s Ikaruka&rsquo;s hinged on the ability to cycle between two polarities. Collecting similar-hued bullets could fuel a special weapon, but impact with a contrastingly-colored projectile meant instant death. Having served as the director for Gradius IV and Ikaruka, as well as having a hand&hellip;

Summary : A steep price and the reuse of graphical assets won’t stop Kokuga from being enjoyed by genre fans.