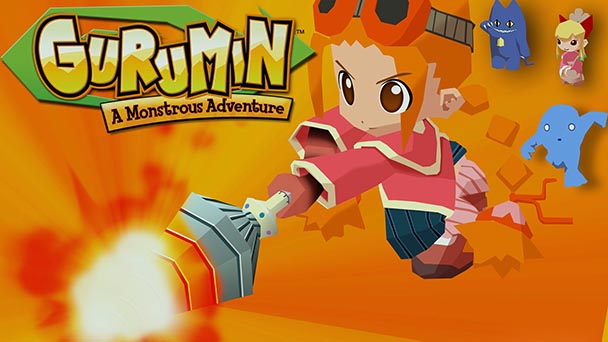 Like most mainstream media, the primary goal of interactive entertainment is escapism. When the collective weight of work, bills, and relationships congeals into a burdensome load, we have the ability to retreat into meticulously detailed, fantastical realms. For many, games act as our catharsis, offering a temporary reprieve from day-to-day drudgery.

But survey the predominant themes of our contemporary diversions and you’ll find a surplus of solemnity. From stoic first-person shooters to role-playing games where the apocalypse is near-certain, most modern games take themselves quite seriously. In fact, one of the few exceptions to this rule is Nintendo’s output, where radiant color palettes and affable character designs signify a deliberate departure from the norm. 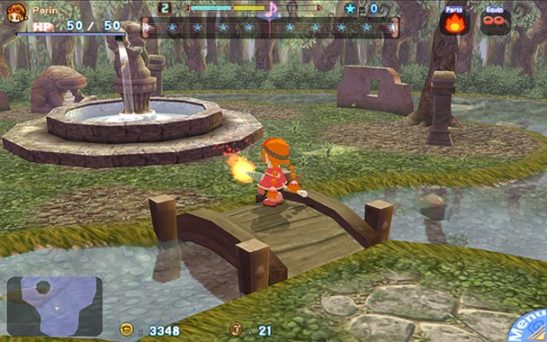 In many ways, the release of Gurumin: A Monstrous Adventure is a near-seamless reminder of that halcyon era, when games offered worlds we’d like to live in, rather than doleful reflections of our own worlds. Filled with the type of childlike wonder that characterizes the output of Miyazaki and Miyamoto, the Nihon Falcom-developed title tasks players with dissipating a scourge known as the Dark Mist. As an accumulation of apprehension and negativity, the murky haze is more than just a dilemma to be overcome, it also symbolizes the game’s persistently optimistic vibe.

While Japanese audiences were able to play Gurumin on their PCs in 2004, stateside games didn’t get in on the fun until Mastiff Games localized the PSP iteration in 2007. Once they inserted the game into their UMD trays, they discovered a narrative that centered around an twelve-year old girl named Parin, whose plucky demeanor and orange pigtails recalled children’s book character Pippi Longstocking. With her parents away excavating an ancient ruin, the adolescent is sent to live with her grandfather. Although the move provides the freedom to frolic through her new hometown’s quaint avenues, there is one significant drawback- there appears to be no other children residing in the diminutive mining village. 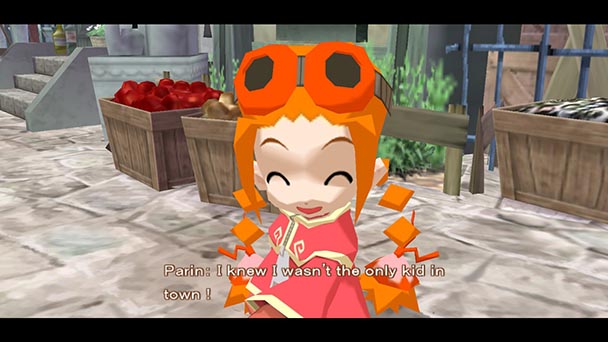 That situation changes when Parin comes to the rescue of a dog, and is thanked by a mysterious young girl. An apparent contradiction to the absence of youngsters in the town, Pino explains that’s she’s a monster and as such- unseen by the adult eye. Parin’s lack of distress becomes the catalyst for a friendship, with Pino inviting the protagonist to see her home of Monster Village. Inopportunely, the visit is interrupted by incident, with evil beings known as Phantoms breaking up the socializing, seizing the town’s monsters, and releasing a haze that blankets the realm.

Following the kidnapping, the remaining monsters lead Parin to a drill bit that’s wedged in an base, Excalibur-style. After retrieving the weapon, it’s apparent that the young girl is fated to assist the citizens of Monster Village, vanquishing the Phantoms, and in the process- dissipating the malevolent mist that has damaged the serene settlement. 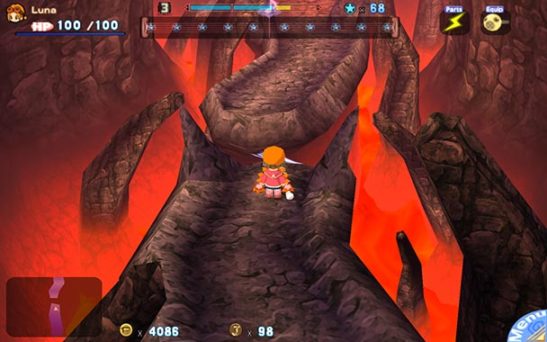 For a game that’s over a decade old, A Monstrous Adventure’s plotline can be a bit musty. Dialog is rooted in exposition, rather than the emotional, making conversations a bit insipid. A Monstrous Adventure’s decision to offer only the English-language dub is another tender point; it would have been great to hear the game’s original voice acting (which was unlockable in the PSP version, but only after finishing the game once). But look past these transgressions and the game’s storyline is admirable for its sanguine, Disney-like tone and attempts at humor.

Less dated is Gurumin’s combat, which adeptly scales from one-button strikes to sophisticated specials which are execution with a rotation of an analog stick. At the core of combat is Parin’s (or Popon, an alternate character who’s armed with a sword) ability to charge her weapon, which is accomplished by holding down the attack button. With the level of the strike supplemented, the character is able to overwhelm foes, sending minor enemies rebounding into other nearby opponents for additional damage. Later, players can purchase abilities that allow Parin to perform devastating strikes and even have access to elemental abilities, feeding into the game’s light puzzles. 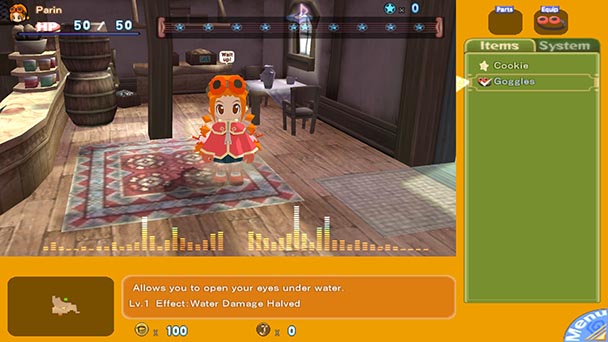 Remarkably, Parin’s damage output isn’t a constant, varying by the level of her drill power meter. When foes come into contact with the heroine, not only will she lose HP, but she’ll also sacrifice her potential to cause pain. As such, players are forced to care for the young maiden, keeping her from both enemies and the threat of water, lest they’ll be penalized twice. This is especially true during boss battles, where a battered Parin can only issue a faction of her potential punishment. Fortunately, recouping Drill Power is relatively easy, with oil or an ample number of breakable environmental elements restoring the weapon to its full potential.

Destroying objects or enemies also rewards players with coinage which play into Gurumin’s costume component. Far more than cosmetic changes, purchasable accessories and outfits endow the protagonist with potential, whether via a maid bonnet that restores HP to cat ears that can divulge the location of hidden chests. Beyond spending money on these items, players can also procure a variety of HP-replenishing pastries from the local baker. 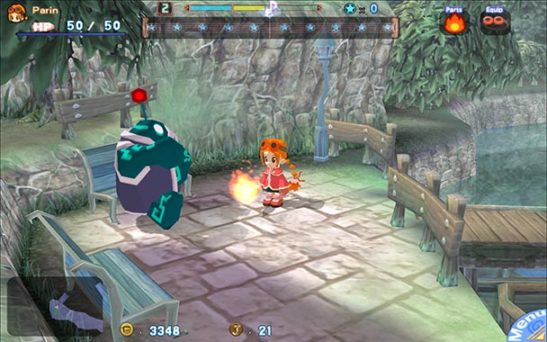 Pleasingly, hardware can upgraded further. Although A Monstrous Adventure has a limited number of phantom types, the game boosts its bestiary by adding different types of armor onto opponents. Knocking off this protection does more that allow players to cleave away at the foe underneath- they’ll also be able to pick up the discarded reinforcement pieces and recycle the scrap, earning the ability to upgrade their gear. While the amount of required junk can seem excessive near the end of the game, the majority of Gurumin is guided by an adept balance toward character and equipment improvement.

An unlockable difficulty level and new game+ option can raise the challenge for those seeking a demanding drilling expedition. But for those who seeking a more tranquil journey will appreciate the game’s sense of autonomy. Sure, Gurumin can be completed in a no-sense, twelve hour stint. But for those less concerning about the rush to the final credits, the title offers the ability to revisit previously played dungeons, which are habitually scaled toward fifteen minute play sessions. For completionists, there’s plenty to chase after, with stage rankings to perfect, a cornucopia of unlockables, and an alternate ending offering an alluring assortment of incentives. 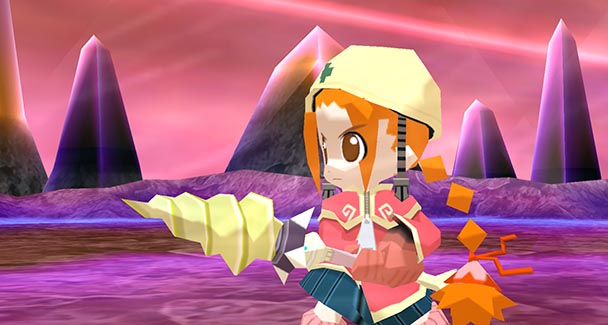 Woefully, A Monstrous Adventure’s PC port fall a bit short. Although the game’s offers a slew of customizable settings, allowing players to switch resolutions, apply six different levels of texture filtering, and tweak their controller inputs, the underlying code is rather unoptimized. On two i7ss, one with a GTX 770 the other with a GTX 860M, framerates never transcended the 30 fps mark, and even fell to the mid 20’s for a fraction of a second. What’s more, the game still shows the type of character clipping that was common in the late 2000’s, but has largely been eliminated in modern games. On the upside, the game offers a number of in-game achievements, which when attained give players desktop wallpapers.

While the lack of engine optimization will be a sticking point for PC purists, others will be too busy soaking up Gurumin’s charms to notice the framerate drops and polygon clipping. Like many Nihon Falcom games, A Monstrous Adventure has offset the afflictions of age by developing play mechanics that start simple, gradually adding just enough complexity to keep players absorbed through the game’s substantially-sized campaign. 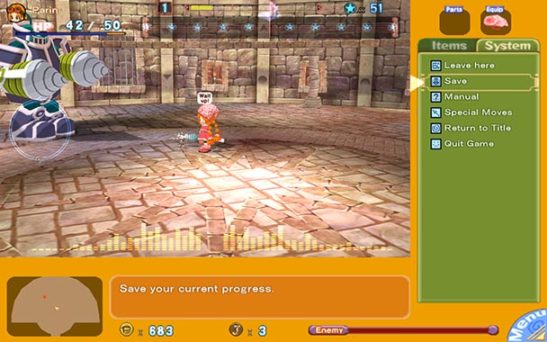 Gurumin: A Monstrous Adventure was played on the PC with review code provided by the publisher.

Gurumin: A Monstrous Adventure
Platform: PC
Developer: Nihon-Falcom
Publisher: Mastiff Games
Release date: March 30th, 2015
Price: $9.99 via Steam
Gurumin: A Monstrous Adventure review
Like most mainstream media, the primary goal of interactive entertainment is escapism. When the collective weight of work, bills, and relationships congeals into a burdensome load, we have the ability to retreat into meticulously detailed, fantastical realms. For many, games act as our catharsis, offering a temporary reprieve from day-to-day drudgery. But survey the predominant themes of our contemporary diversions and you&rsquo;ll find a surplus of solemnity. From stoic first-person shooters to role-playing games where the apocalypse is near-certain, most modern games take themselves quite seriously. In fact, one of the few exceptions to this rule is Nintendo&rsquo;s output, where&hellip;

Summary : Gurumin: A Monstrous Adventure mixes action-driven combat, a cheerful plotline, along with some light role-playing incentivizing. It’s a pleasing recipe that seems easy to replicate, but proves elusive for most modern developers.