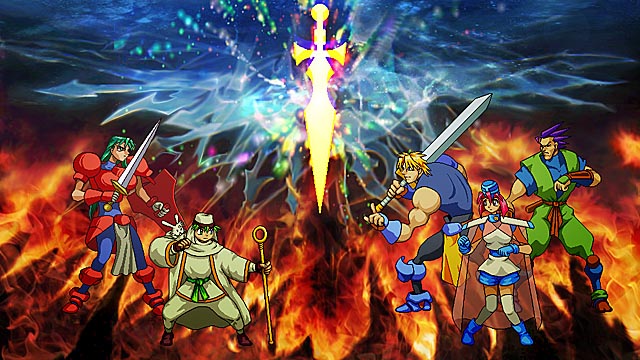 What is the concept? 1996’s Guardian Heroes is a textbook example of the fan-pleasing design philosophy of Japanese developer Treasure (Gunstar Heroes, Bangai-O, Ikaruga). Most brawlers of the era focused on the protagonist’s efforts to reach beyond the right side of their CRTs- a domain protected by a procession of pugilistic foes as well as the sporadic boss character. Although those rudiments are evident in Guardian, the title delivers a slew of mechanics which transcend archetypical beat-‘em-up tenets. From light role-playing elements, a branching storyline, multiple endings, an ethics system, as well as a supplementary Versus Mode, the game represents the genre’s apex.

SEGA’s recent revitalization adds several optional amendments in an effort to modernize the fifteen-year old Saturn title to the tastes of contemporary players. Coupled with a transition onto widescreen televisions, gamers can opt for a new visual filter which endows the game with a pleasing, hand-drawn  aesthetic which recalls the art style of Valkyria Chronicles. There’s also a remodeled control method available, which maps magic to the right stick to give players access to an invaluable backstep button. Arcade veterans will likely shun spell selection altogether, as magic can be cast with Street Fighter-esque quarter-circle commands. With the additions of air dashes and air recoveries, even players who have probed every pixel of Guardian Heroes will find a reason to revisit the technological/fantastical battlegrounds. 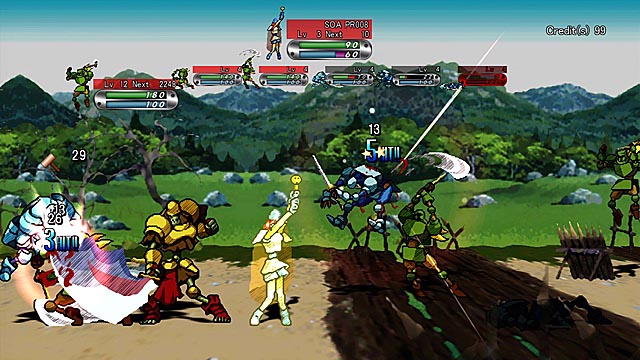 Although Guardian Heroes contains thirty separate stages, a single playthough won’t reveal all the levels, as gamers will select from various forks in the title’s narrative. As such, the game implores for replay, as your attitude toward helpless civilians and compassion toward fallen enemies all will factor in to the game’s finale. 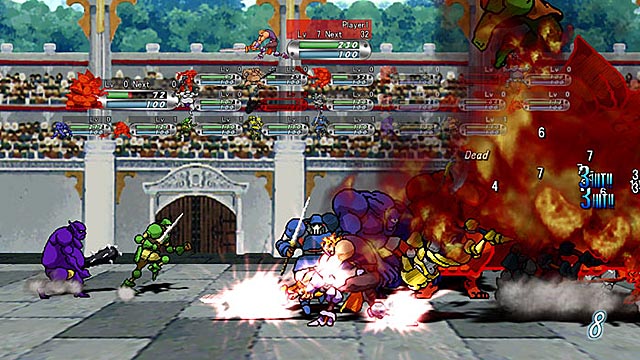 What are the game’s strengths? Whereas the original Saturn title forced multiple players to share a single console, this vitalization offers robust network support. Unlike most ports which shoehorn basic netcode in, Treasure remakes offers a wealth of lag-battling options- from limiting a game to the host’s country to offering clear indicators of a participants upload and download speeds. As long as players abide by the game’s advice, co-operative matches can feel as responsive as local play.

Beyond the core game, others will find virtue in the frenzied fracases of Versus Mode. Accommodating up to four local players or a dozen combatants over Xbox Live, this deviation permits the game’s enormous roster of friendly and enemy characters to vie for supremacy. With so many fighters to choose from, balancing this mode would have been a fool’s errand. Wisely, Treasure passes over the tools to players, allowing for a wide variety of game-altering options. In execution, battles habitually turn into the type of sublime chaos Treasure is known for, as dozens of sprites fuse into a hyperkinetic display of pixelated pugilism. 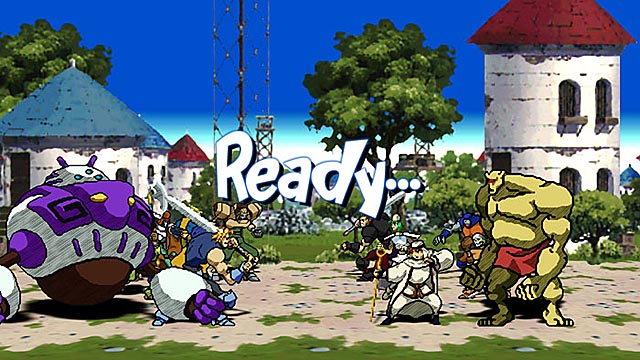 What could have been improved? Guardian Heroes’ combat is both frantic and gratifying, with the potential for a single, heavy strike to injure four or five foes. Unfortunately, the frenzied nature of combat can consequently result in the sporadic moment of confusion, as dozens of sprites are moving in close proximity to each other. Like Bangai-O or Radiant Silvergun, the tumultuous whirlwind of action is Treasure’s signature motif, yet may be appreciated by gamers seeking a serene beat-‘em-up.

Is it worth the money? With contemporaries such as TMNT: Turtles in Time, X-Men Arcade selling at the same price point, the ten dollar cost of Guardian Heroes seems extremely reasonable. By offering an experience that delivers an unparalleled amount of depth for a 2D brawler, and urges multiple plays, Treasure’s triumphant title is a worthwhile investment for any enthusiast of the genre. Even if you already own and love the Saturn version (and can tolerate the system’s crappy composite signal), the potential for a sequel is just one more reason to pick the game up. 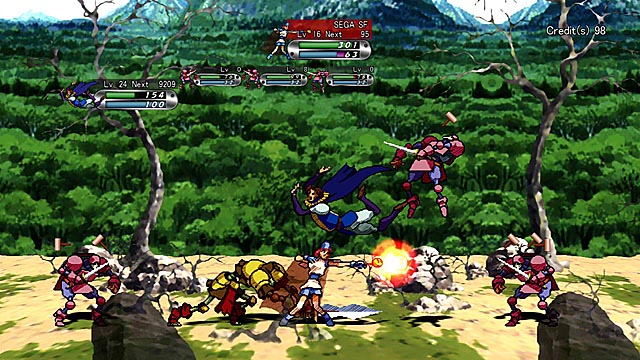