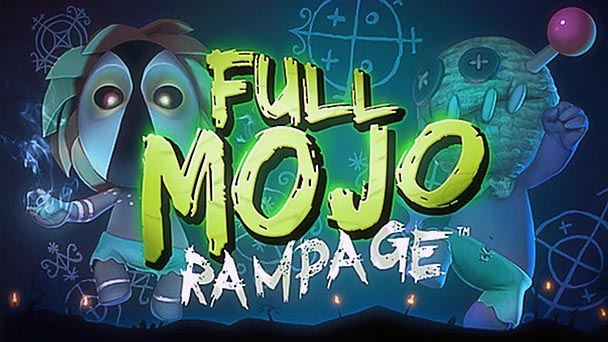 In the past few years, gamers have witnessed a boom in indie developed titles, creating a new wave of experimental releases. One of the most common practices is bringing back old genres that have been neglected by larger publishers and either modernizing or mixing them with other gameplay styles. Full Mojo Rampage is an example of the latter, by combining elements of a twin-stick shooters with a Roguelite experience. All of it is wrapped in a cartoony voodoo theme making for possibly one of the most unique choices any developer could have made for this sort of title, something which I’m all for; more voodoo dolls in gaming can only be a good thing!

Starting the game, you can customize your voodoo character through pins which add bonus stats, choosing your voodoo God (called “loa”) which decides your spells and abilities, or permanently boosting your abilities by levelling up. Players can even alter the look of their character by unlocking new masks though this is a purely aesthetic change. At first, the variety will be limited, however through progression and perseverance players can unlock more items which become available on following playthroughs. 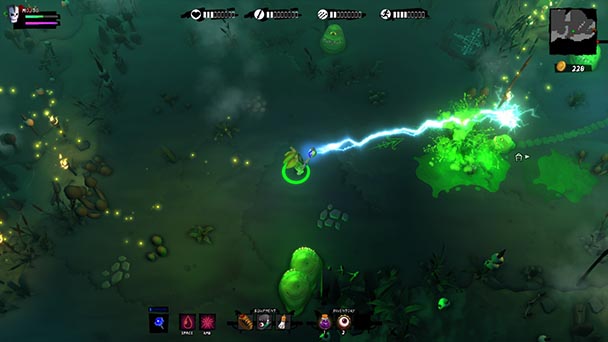 Despite its wonderfully original theme, Full Mojo Rampage has no real premise or story to speak of, instead, players are given four quests to undertake which are just maps with several randomly generated stages. Each of these carries an objective, but unfortunately there’s little variety between them, boggling down to either finding the exit or collecting items before finding said exit.

As expected from twin-stick shooters, your progress will be hindered by hundreds of enemies who will waste no time in swarming the player. All of them carry a very cartoony and child friendly design, but that doesn’t make them any less dangerous as I constantly found myself walking in circles and dodging around them as I kept shooting and casting spells. Killing them will earn you gold coins which can later be redeemed towards purchasing masks and loa or upgrading pins. Occasionally an enemy may drop a power-up, item or gear. The first temporarily improves your main attack, with homing capabilities, lasers, spread shots or any other Contra-esque weapon variation. The other two possessions are more closely tied to the game’s RPG roots. Equipment increases your stats as long as they are in the correct slot, whereas items can generally only be used once, but grant healing properties, temporary boosts or in some cases have an equal chance of granting a permanent bonuses/penalties. 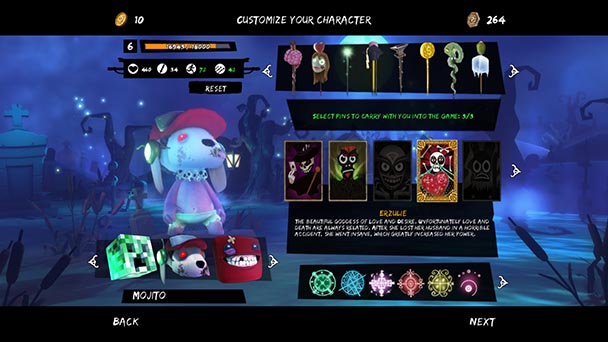 Maps are also littered with traps, environmental dangers, secrets and special rooms. The latter can lead to chests, shops or even a chance at meeting Loa which are the closest thing Full Mojo Rampage has to NPCs. Their dialogs are quirky and fun to read, but are over too quickly, I would have loved a chance to learn more about them. Visiting them however can be a risky venture, while they generally grant you bonuses sometimes their deals carry a price which will often involve reducing your maximum HP or increase the game’s difficulty.

Staying true its Roguelite nature, players are expected to complete quests with just one life, losing results in either restarting the quest or quit to the main screen. Regardless of the choice, all of the gear, items and bonuses collected will disappear, but not all is lost as collected gold and experience stay with you as do your new stats when the main character levels up. Upon completion of each level the game prompts you with a short text blurb detailing your progress. Finishing a ‘quest’ also feels extremely unsatisfying, as the game presents you what amounts to little more than a congratulatory message before unceremoniously prompting you to the main screen. 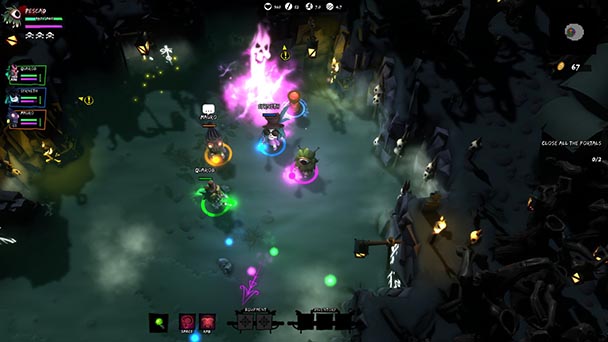 In addition to the main four quests, there’s an endless survival mode, which as the name implies is a test of endurance and a daily randomly generated quest.  These work well in theory, but in practice there are no new objectives that weren’t already in previous quests, so repetition does set in.

Full Mojo Rampage features a slew of multiplayer options, ranging from the usual online co-op to competitive modes like deathmatch, team deathmatch, capture the flag and king of the hill. Unfortunately finding players can be a daunting task. With a little time and persistence I was able to get a couple of co-op games going which were definitely more chaotic than their single player counterpart, though thankfully the game is kind enough to offset this by actually granting lives. As for the competitive modes, try as I might, I just could not find any player, likely these issues will only get worse in time. Finally we have the local co-op option, a mode which I was looking forward to, but unfortunately, I soon discovered in this mode, only the host can pick up gear, power-ups or level up, whereas the second player is left with a severely watered down experience. 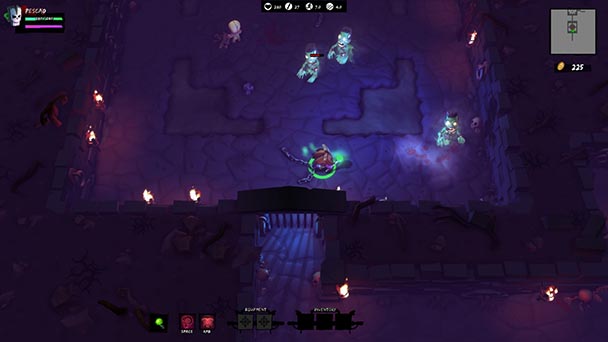 Graphically, the game has a very appealing, child friendly art style with seemingly endless hordes of cutesy skeletons and chickens out for your blood. On a technical level, the bells and whistles are kept to a minimum ensuring most gaming computers should be able to run it without a hitch. Even a budget graphics card should be able to max out Full Mojo Rampage’s settings while maintaining a steady frame rate.

While not quite as frantic as Super Smash TV, Full Mojo Rampage’s Roguelite features help prolong its expected gameplay length as there are only four quests to undertake. The most egregious issue however, is the general lack of an online community in a game that would have heavily benefited from it, made even worse by an incomplete local co-op option. With that said Full Mojo Rampage’s single player portion is a lot of fun as you explore each stage extensively for new and better loot.

Full Mojo Rampage was played on the PC with review code provided by the publisher.

Full Mojo Rampage Review
In the past few years, gamers have witnessed a boom in indie developed titles, creating a new wave of experimental releases. One of the most common practices is bringing back old genres that have been neglected by larger publishers and either modernizing or mixing them with other gameplay styles.&nbsp;Full Mojo Rampage is an example of the latter, by combining elements of a twin-stick shooters with a Roguelite experience. All of it is wrapped in a cartoony voodoo theme making for possibly one of the most unique choices any developer could have made for this sort of title, something which I&rsquo;m&hellip;

Summary : A fun, cartoony voodoo themed romp that provides a good challenge and is best when played online.